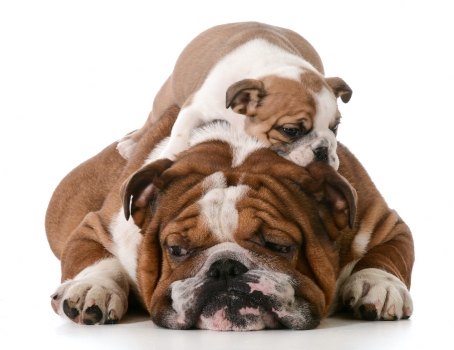 If you find a dog you love, use the sire that produced him – or so the conventional wisdom goes.

Those obsessed dog breeding know there are always things you have to experience to really believe.
By
Geir Flyckt-Pedersen

There are many – breeder dilemmas, that is – but watching a recent edition of “Talking Dogs with Ante” reminded me of one of the most dominant ones.

The interviewee was none other than Chris Amoo, a Liverpudlian famous as lead singer of the band Real Thing! Many will remember Chris winning the Hound Group at Crufts in successive years with Afghans in the ’70s, climaxed by Best in Show on the second attempt. These days Chris and his lovely wife Julie are enjoying a hugely successful time with Irish Wolfhounds, which really has become their signature breed.

I don’t know how many of you listen to these interviews, which under normal circumstances take place on Wednesdays at 2 p.m. Eastern, but they are of course accessible later at any time thanks to modern technology.

Since I left Europe 15 years ago and not really being part of the FCI world of dogs for decades before that, a lot of the people interviewed are completely unknown entities to me. So I choose to listen to the ones whose names and history I am familiar with – and there are definitely opportunities to widen perspectives and horizons in addition to actually learn something about dogs as well as people …

I could of course give you a list of my favorite interviews, but will restrict myself to mentioning the longest one, which happened to be with Michael Gadsby, the rather shy and self-effacing owner of the Afterglow prefix who has bred and made up champions in more breeds than anyone else in the U.K. In other words, a dog person, not restricted to one breed. I have lots of respect for this guy, so I was delighted to find out that he created so much interest that Ante had to add a “question and answer” session later on.

If you haven’t watched it already, go to the “Talking Dogs with Ante” Facebook page, and you will have a few hours of serious entertainment and education. Plus you can find a list of previous interviews with people like Ann Ingram, Edd Bivin, Andrew Brace, Frank Kane, Michael Canalizo and a long list of experienced judges and handlers from many parts of the world.

But back to the beginning: the Amoo interview.

He came up with so many interesting points, but what resonated and stuck with me regarded choice of stud dogs.

When I think of early advice given to me by old, experienced breeders, the one I recall most vividly is: If you find a dog you love, don’t use him – use the sire that produced him. I thought that made sense at the time – until another person told me that if I created a strong enough bitch line I could use any dog … And there were breeders lucky enough to have bitches who laid golden eggs no matter what they were mixed with!

The first alternative is of course ridiculous in many ways, as it totally indicated that the bitch side is of no importance! The second one, likewise: If you have a super brood bitch, it would be a crime not to use a dog of matching quality – or better!

However, what Chris mentioned I have experienced myself on so many occasions: Many people think that if there is a dog of the highest caliber that produces top-quality offspring, they might just as well use his brother …

Whenever we chose a male partner for any of our girls, it was based on looks more than pedigree – also taking into consideration areas needing to be improved, but without losing any of the attributes she already had. Complementary breeding, we called it.

I am a firm believer in the individual’s ability to pass on their own looks and qualities. This theory has for me personally been confirmed again and again – and the few times we tried to follow pedigrees more than looks, it has never worked. Probably the most interesting discovery was that there are differences between how breeds reproduce, which I was not aware of until we ourselves were seriously involved with four different breeds.

I will not mention the breed involved, but when I was still living in the U.K. I had set my eyes on this spectacular young dog. Convinced he would be snapped up by some of these visiting Yankee handlers, I decided to use him ASAP. I was very familiar with his sire, which was a sound, nice dog all round, but in no way an eyecatcher.

Arriving at the owner’s home to use the young dog, I made the stupid mistake of asking: Can I see his mother? Which I did. Rather shocked and disappointed, I immediately decided to use his sire instead! And we had a litter of puppies: sound, nice, but nothing exciting.

Then by chance we used the son. We had an outstanding litter with absolutely no trace of or resemblance to his mother. And no sign of her appeared in the next few generations, either …

But back to the subject of doing “parallel combinations”! If I bred X to Y, some of my puppy buyers who owned sisters of bitch X immediately decided to “copy” what we had just done. When we told them it was not a good idea, as their bitch, although a litter sister, was very different from ours, they believed it was advice given as “self-protection” to steer them away from success …

They went ahead – and, usually, I was proven right. Although there were two examples where the “copycat” results were better than mine, which of course was very nice and slightly embarrassing, as it confirmed their suspicion of our self-protection policy …ip-=ouhgvFor those of you who have been seriously obsessed with anything involving dog breeding, there are always things you have to experience to really believe. And experiments will always be interesting – or, in some cases, depressing.

For a variety of reasons, I decided at an early stage to create my own stud dogs in one breed to be sure they actually were who they were and looked the way they were born. After a number of years, I finally decided it was time to mix two lines I had kept separate with the intention of one day bringing them together. I selected the two candidates, which I thought looked exactly the way I wanted: as if made for each other. The result was hugely successful – all champions, and two of them really made it big!

Then someone suggested: You have the sister of the sire and the brother of the dam; you should theoretically get a similar result. Which is what I decided, but in a way rather reluctantly, as the two individuals in real life didn’t really match up.

Well, the result was a strong, healthy group of puppies, but miles from the quality of the previous lot with 100% identical pedigree. Disappointing, but still slightly exciting, as it confirmed: I was right AGAIN!

If I had the time and the space I could list dog after dog, bitch after bitch, siblings from the same litter in which only one in each family, despite being given the same chances and opportunities, had any impact on the future of the breeds.

I think that from a personal angle in a way I was lucky that I had to wait a number of years before I could breed my first litter of puppies. It gave me a lot of time to observe what other people did and watch their results. But breeding dogs will never be an exact science, and I personally think that repeating very successful combinations with totally different results is among the best illustrations.

It is a pity in many ways that most people today seem more interested in the product that they see in the ring (the superstars ...) rather than the process behind the creation of these beauties!

And for each and every breed, plus from individual to individual, you will discover new, interesting and at time shocking and disappointing proof of how little you really know.

© Dog News. This article may not be reposted, reprinted, rewritten, excerpted or otherwise duplicated in any medium without the express written permission of the publisher.
Sat, 10/30/2021 - 9:55pm