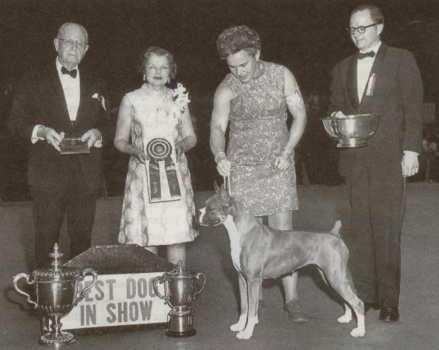 The Magic of Westminster

It's that time of year again!
By
Geir Flyckt-Pedersen

It’s that time of the year again! One that I think we have all been looking forward to — and the build-up for which over the oast 12 months will shortly have its climax and prove if it lived up to our expectations.

This year it is back to champions only. Personally I was hoping that would mean returning to the Garden only, but seemingly that’s never gonna happen.

Growing up in Norway reading the kennel club’s magazine, there were annually reports both from Crufts and Westminster. So of course both shows were added to my bucket list very early on, but it took some time to become a reality. Crufts, of course, first, and very early, but the long flight to New York was a turn-off. So not until 1978 did I set foot in Madison Square Garden and I was of course worried that after all these years of “build-up” the experience would be disappointing. But it was not. Although the following year, 1979, for some reason was more memorable. Or maybe some of the memories are slightly mixed up …

Our trip that year was my first-ever (and so far only)  “group travel,” organized by Liz and Joe Cartledge — and I think a very young Angela Cavill was left in charge of the entire group.

We were all booked into the Statler Hilton just across the road, which became a rather interesting experience. We got a room on the top floor, but turning on the TV  they showed pictures from a hotel fire, I think in Australia. So, after having experienced a rather scary and rickety ride up the elevator, it was back to reception to request a lower floor within walking distance of the reception desk. Got a room on the fourth overlooking a rather scruffy backyard, but leaving the room to buy drinks from the vending machine, a side door opened, and a lady wearing a fur coat appeared. Looking me in the eyes, she opened her coat and said, “All this for 25 dollars!”

I ran back to the room, slightly shocked, but even more excited — an exciting start to an exciting week in New York. And although the lady was never involved, we had a great time.

Those old enough will remember the Terrier show the day before the main show — and we all of course headed for the Barracks at the Armory (I think it was). Arriving at the hall a little late, Best of Breed in Smooth Fox Terriers had just entered the ring. Seeing all those well-dressed handlers with well-presented dogs was something I would never forget. Then on to Airedales, which were even more impressive: They had managed to breed for color, which at the time was a problem in the UK …

The fact that Westminster was more than a dog show became obvious when listening to people's conversations about which parties to attend – and we were fortunate to be included in some of them.

Then onto the show itself. I had been told that a lady I had admired from a distance for years named Jane Forsyth and her husband Bob had 79 dogs entered, plus the added information that this might be their last Westminster before retirement. So I made it my target to follow this operation and find out how this was at all possible. I started by finding my way to what was, I think, The Forsyth Wall, where all their dogs were benched.

Then made a list of breeds and times, plus which breeds she would definitely show herself.

And then the show began. A number of assistants, apparently with walkie-talkies by the ringside. And to make a long story a little shorter: Whenever Mrs. Forsyth grabbed the leash of a dog to enter the ring, it seemed as if transfixed on its handler. I vividly remember looking at an Afghan, which to me at ringside looked rather ordinary — once taken over by her handler changed completely. Similar experiences with Irish Setters, Boxers, Smooth Fox Terriers, etc.

And what was most impressive: At the end of the day all 79 dogs had been shown!

It is interesting that for some reason a circle has been completed in as much as the next-generation Forsyth is judging at this year's show.

We all know that Jane and Bob Forsyth became well-respected judges in their own right whose opinions were in demand for a few decades after their retirement. So Sioux has certainly a couple of legends behind her — and expectations to live up to.

And it is a little sad that Jane in particular is no longer here to watch her daughter in action, as seeing her as a judge was something she dreamed of for many years, telling me over and over what a fabulous “eye” her daughter had. And for that to happen at Westminster would have been like the icing on the cake …

The downside to the annual Crufts and Westminster is that there were so many wonderful breeders, handlers and judges who all were a part in making our early visits to this show so memorable, interesting and exciting — who are no longer with us.

That the Annual Westminster Dog Show was something special was demonstrated by the fact that the entire world (well at least most of the European part of it) was interested.

I happened to come across an article about the show as well including the American show scene in general, written by fellow terrier enthusiast and breeder Gunnar Arvidson in the 1952 issue of Hundsport with the headline: "500 DOG SHOWS A YEAR!"

Illustrated by a photo of the English Setter Ch Rock Falls Colonel who I don’t think ever won the top spot at this show and he goes on to mention names like the legendary Boxer Ch Bang Away of Sirrah Crest then being a Fox Terrier person the  Champions Foxbank Entertainer of Harham and Wyretex Wyns Traveller. For some reason the Best in Show winner Ch Rancho Dobes Storm’s name was not included, but I know he had countless admirers in Europe.

The 500 shows gives you a perspective on “now and then,” but is still a fact that whoever wins this show has a name that will live on forever.

There have been some controversial decisions made during the years, but also some dogs whose names will live on forever like the cocker Ch My Own Brucie, The Irish Water Spaniel Irishtocrat, the GSD Manhattan, the Kerry Blue Mick, Scotties Bingo and Shannon, the Affenpinscher Banana Joe, the WFT King, etc., etc. (the list could go on) who all became known on first name basis with the entire dog world.

When writing these lines I feel pretty certain we have another fab show ahead of us.

I love the fact that Westminster is made into a special occasion and that judges and officials all have to dress up. Which I think in turn affects the performance of the handlers as well as their charges, both parties knowing that to win here you need that special look to attract attention.

In a world where “Casual Friday” has become “Casual Everyday,” I think we need events like this within our little world or community — as it for a few days actually makes us all feel as part of an extended party! Which it takes at least a week to recover from!

© Dog News. This article may not be reposted, reprinted, rewritten, excerpted or otherwise duplicated in any medium without the express written permission of the publisher.
Wed, 01/29/2020 - 8:06pm