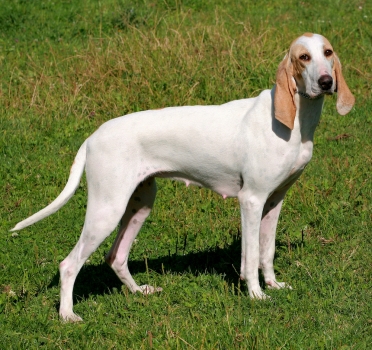 Happy to meet a Porcelaine on these shores, but the feeling was not mutual.

Time for introspection? Maybe even make some constructive changes?
By
Geir Flyckt-Pedersen

A simple fact: We are all happy to be back in the swing of things — and that dog shows are back on track without any noticeable restrictions or cancellations, with the exception of a few judge changes due to the dreaded virus.

I have personally had the privilege of judging a number of shows, and based on my observations our sport, the overall quality of dogs seems to be at a decent level, with some super stars mixed in. I am, however, sad and angry about the numbers of dogs shown to me where the handler (I believe in these cases normally the owner/handler) explained that the dog’s shyness and refusal to be examined were due to being frightened by previous judges. In some cases on the same day, but also at previous shows.

When this happened several times and I had some “free time” between breeds, I walked around to watch some judges in action. And in a couple of cases I was shocked by the clumsy and unprofessional way some judges who I knew were new to this group of dogs – and, maybe, new as judges — approached and handled the exhibits.

I will not in any way claim to be a dog whisperer, but having shown dogs myself for some 50 years I know the importance of making the introduction to the ring for new hopefuls as positive as possible. To grab a six-month-old puppy of any breed, trying to force it to stand still, is definitely counter productive. And then trying to force open the mouth of a puppy whose mouth still feels sore after exchanging the milk teeth with the “forever set” is definitely a NO No!

If you ask me about my favorite and most memorable incidents during the last few shows, it is all about two puppies.

The first was a Miniature Smooth Dachshund shown by a very young girl, and she impressed me. Trying with great difficulty to set the puppy up on the table, she told me: “She doesn’t like men!” She had been scared by a guy who judged her on a previous occasion. And when I approached, she did every possible effort to get off the table. From then on it was all up to me — all the handler did was make sure she didn’t fall off the table …

I might in some people’s eyes have “wasted” some five or six minutes to convince the puppy there was no danger. Before getting back on the ground she was completely relaxed, no problems checking bite and all other details. And she said goodbye by licking my hand! Certainly made my day!

Then this week I had the privilege of judging dogs at an Open show (at a regular show) and a “new” and very beautiful breed named Porcelaine was one I very much looked forward to meeting. I have seen the breed in France, but had no clue it had been introduced to America.

Initially a rather disappointing experience as the very young dog, rather striking to look at, was trying his utmost not to have anything to do with me. (I don’t claim to be psychic, either, but I heard a couple of “understandable” in the distance …)

Anyway – again, I thought: How can I help this dog? And again I decided to give him an extra chance by spending another five minutes with him. When I then sent him “down and back,” his movement was greatly improved, and upon return he embraced me with both “arms” and kissed my face! Such a great feeling!

I must admit, however, that these two examples are the selected success stories, as it doesn’t work with all the “uncooperatives.” And I am sure that some person in authority would criticize the time spent trying to “help” these youngsters, but even with a max number of dogs entered there will always be absentees, which leaves time to help those in need!

This experience made me wonder: Isn’t it time for a revision of the current judges education and approval of new judges?

There is nothing more unacceptable than having the future of your puppy ruined by incompetent handling in the ring — by, of all things, THE JUDGE!

I have a feeling that nowadays there is an influx of new and, dare I say, people without adequate background and experience who are jumping on the bandwagon for the “low entry” breeds. Not at all based on interest, but purely for the sake of making themselves more useful for those show chairs and committees who face the daunting task of putting together a judging panel.

We see more and more people who for decades have been occasional weekend exhibitors due to other “normal” commitments like work … and then upon retirement decide to start judging. Some with an insatiable appetite for adding breeds to their CV – breeds which they during their life showed zero interest in!

In other parts of the world, new judges have to prove their ability to handle the exhibits as well as their handlers before being let loose in the ring.

In the UK – at least according to the past rules – you had to have judged a fairly large number of classes before your application was approved by the breed clubs as well as The Kennel Club.

No system is perfect, and there will always be things to improve. But I think it is a minimum requirement that anyone approved to judge our dogs at least show that they actually like dogs! I have always argued that the best-qualified candidates can be recruited from the ranks of professional handlers as well as their long-time assistants.

If you add all hours spent at dog shows discussing dogs of all breeds with fellow handlers and exhibitors, and adding all efforts made to condition and groom their hopefuls, their brains must be rather impervious if they aren’t filled with knowledge about most breeds.

I will also mention that those who come from a background of breeds that require extensive grooming should probably be the only ones approved to judge breeds that require extensive grooming. Too many without that experience have been seen to judge the sculptures presented to them — without the ability to find what’s hiding under that work of art. The skill of many of our top handlers to create illusions is in my humble opinion amazing.

I will also argue that if you have a long-time background as a groomer — and especially as a regular pet groomer — you have most likely learned how to “read” the minds of unwilling victims, which will definitely be a plus when “mental” issues caused by inexperience happen in the ring. And I personally had to deal with some crazy animals to fund my dog showing in the early days. Which I in a weird way am appreciating today.

Knock on wood:  I have survived 60-plus years in this game without ever being bitten. Well, one exception: When my own GSD in 1959 jumped a fence and got his hindlegs caught in the fence … But that doesn’t count …

And, finally: It must be frustrating when after decades as a successful professional handler you decide to “retire” to judging and then are approved for just a handful of breeds — on similar terms as Miss Jones, who bred two litters of her breed and attended a few shows per year and then retired from her real job either needing something to do, or even at times some extra income …

If I ruled the world, I would introduce common sense.

© Dog News. This article may not be reposted, reprinted, rewritten, excerpted or otherwise duplicated in any medium without the express written permission of the publisher.
Fri, 09/16/2022 - 11:17pm