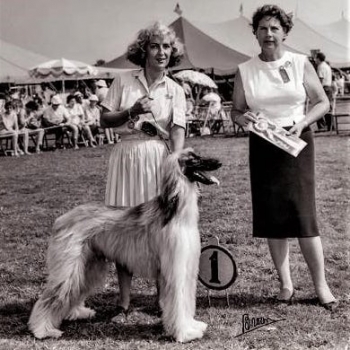 The Eye of the Beholder

There's no accounting for taste -- or preconceptions
By
Geir Flyckt-Pedersen

We are of course talking about beauty in general, but for those of us who judge dogs, it involves every part of the animal we see in front of us.

We have all different backgrounds that influence what we consider the most important and distinguishing feature of each and every breed!

And, sadly, in my world of terriers we see more and more dogs winning, perhaps beautiful in many ways, but lacking in certain areas that for a true expert might break the magic spell. So perhaps the lack of long-time breeders and genuine expertise are some of the reasons why so many breeds seem to be on a track where type and important features are sacrificed (often unbeknownst to the “sacrificer”) for the benefit of general construction. In other words, on a track for a more generic outline! Which I find very sad and depressing.

And often when some outsiders hail a dog to the skies as something  extraordinary and special, you find yourself in this predicament: Shall I be loyal to my breed and speak my mind, or should I keep quiet so as not to upset or disappoint owners, breeders , handlers and – in some cases – even judges. Whoever might have put their head on the block due to their enthusiasm – which in my opinion might qualify them for the ultimate fate …

What has upset me so many times is when prior to judging there are discussions of dogs shown the previous week or weeks, clearly a way to guide each other on the way forward.

Dog shows are for judging dogs. And a few years ago a fairly well-known judge came over to me after judging Whippets, saying: “I have put this dog up several times, but it was time to tell this handler that winning under me was still not automatic!”

My reaction was: “You are here to judge dogs, not discipline the handlers.” Which of course got no response at all.

When we were still breeding dogs and had a fairly large number in the kennels, including a number of hopes for the future, we were frequently visited by enthusiasts from all over the world. I always thought it was unfair to show our terriers at home without the preparation they had at a show, but we still did. There are dogs, and there are show dogs. By that I refer to mentality and temperament. I must add here that our policy was that whenever you entered our premises you would never be able to tell which dogs were currently being shown. They were all kept in show condition.

But for me the most rewarding and sometimes even most annoying part of a visit was to take the visitors into our grooming room and then put one of the dogs or a puppy on the table and ask for opinion. And face facts: Most terriers should really be viewed and assessed in the ring, in competition surrounded by other dogs so the impression of an animal on its own would not really be indicative of their real quality or potential!

But what was interesting was that most of the Scandinavian critique-writing people had first of all to prove their fabulous “eye” by drawing attention to all that was “wrong” with the dog on the table.

It was immediately easy to register if any of our transatlantic friends were unimpressed as that was indicated by total silence – and then when asked, uncomfortably huffing and puffing, showing clear signs of feeling uncomfortable.

All the dogs I showed them were not fantastic – and at times I even included a “ringer” as a cruel test of their eye! Which actually had many surprising comments – hopefully, attempting to be polite. But just listening to the variety of comments I learned a lot about the visitor’s knowledge. And sadly, in many cases they proved to be clueless.

Communication is an important part of life. And based on my own irritation listening to some visitors picking our dogs to pieces, my wife and I tried to be positive and polite when visiting other breeders. But kindness and politeness don’t always pay off.

Many moons ago we visited a very famous kennel in Scotland. We were shown a selection of dogs. Some great and some not so great, but only one was for sale. And this is where communications really failed and politeness worked against us: Leaving the place my wife had this dog on a leash. And as soon as outside the property I asked: Why the hell did you want to buy that dog? Her reply: I was under the impression that you really liked him and wouldn’t mind taking him home! Which surprised her.

To make a long story short: Master became a much-loved pet for a lovely local family. Although an expensive one!

But back to our own kennels: We used to have a party around the time of Windsor, Ascot and Wimbledon – and usually there was a selection of judges, handlers and breeders from all over the globe. And, again, taking some of the visitors to the grooming room in order to pick their brains could be very useful and interesting. I was a little surprised that a number of handlers had very little experience with very young puppies, but some really great brains were involved. I think, if my memory doesn’t fail , that one year the U.S. contingent included names like Green, Musser, Ward, Marvin, Hurt, Shaw and Tongren, in addition to the Irish/ UK contingent O’Donoghue, Sharpe, Langley, Cartledge, Somerfield , Everton, Foxwell, Braddon, etc, etc. Some of these names mean nothing to most readers, but for those of us who were involved on both sides of the Atlantic some 30 years ago they were all significant contributors to our sport in different ways.

I wonder if I have mentioned this before, but getting old and forgetful always make old news new!

In the year I mentioned we happened to have a bunch of young hopeful Wire Fox Terriers in the kennel, varying from two to six months of age. Intent on getting help as well as finding out how much people really knew about my breed, I decided to take a few groups of these people to the grooming room and have a puppy show – and kind of a competition. I was the Judge Supreme to decide who failed and who passed.

I will not mention any names, but some of the domestic handlers had no clue. I had kept an entire litter, as I could not make my mind up. The Irish contingent discarded the entire litter and classified them as suitable for pet homes – actually, a huge surprise, as I thought they were all excellent, but needed some input ...

This part is probably interesting to WFT people only, but the mentioned litter included Louline Pacific, Peterman, Peabody, Passion Flower and Patience, who later on ALL (apart from the latter, who did not like dog shows) became champions and all-breed Multiple Best in Show winners in a variety of countries.

Anyway, the saying about Beauty and the Beholder was more than proved by the variety of comments and individual placings made by all these respected names!

But the interesting part for me was that among all these Worldwide Recognized Terrier Experts, a lady I had just met for the first time and hardly knew named Ruth (Babs) Tongren stood out in the crowd. Not only for being in total agreement with myself, but for the reasons she ranked them in a specific order.

Conclusion: If you have an eye, you have an eye. And even if not considered an expert, having spent a lifetime at dog shows looking at top winners of different breeds it would be amazing, provided you possess that talent, if you hadn’t absorbed what make different top-class animals top class, even within their own breed!

Which of course is the base for my opinion that those hard-working handlers and their assistants who after many years decide to move from showing to handling should be treated very differently in the “qualifying procedure” from those who only – even for years – in comparison attended shows occasionally due to other commitments of life!

© Dog News. This article may not be reposted, reprinted, rewritten, excerpted or otherwise duplicated in any medium without the express written permission of the publisher.
Wed, 06/02/2021 - 2:12pm