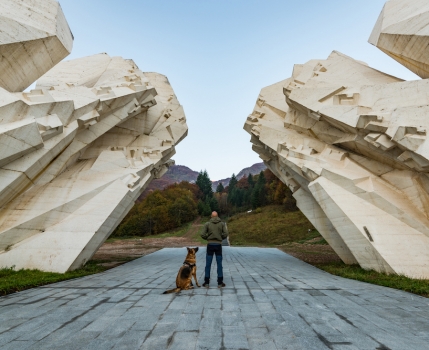 German Shepherd and friend at a World War II monument in Bosnia.

Never before have so many had their lives obstructed and restricted, worldwide, as we have experienced during the last 14 to 15 months.

And let us pray it will soon be over and that it never happens again!

How it has affected the world in every aspect of life – private, work or business – has been widely reported and still seems to have series of areas with uncertainty and unpredictability, but a lot of my focus during these months has naturally been the interest that has dominated my life: Dogs and, maybe more than anything, their well-being.

Even if the United States was involved with a number of wars during the last century, the country was never occupied by foreign powers, which completely changes the frame of reference compared to those of us unfortunate to grow up during or just after years of war-torn experiences.

What has the effect on our lives, sport and especially our dogs been from this pandemic?

Being raised in a country fresh from liberation and with an elementary-school teacher who spent four years in a concentration camp, I was fed never-ending stories about how war can change people’s lives and even their personalities, and I will never forget them.

On a personal level, at present, even if at times bored to death during this time of isolation, I decided to focus on comparing my situation to the stories about cruelty and restriction that many European citizens, including my own family, had to endure for more than five years.

And in comparison this year, for most of us, hasn’t really been that bad.

I have previously mentioned that when Norway first was occupied, the German forces confiscated basically all dogs of breeds that had potential for “war work”! And even if they failed their tests, they just disappeared and were never returned to their real owners.

Then for the owners and breeders of more “useless” breeds, soon other problems appeared.

The fact that food was rationed to the extent that the human population could hardly survive on their quotas, if you decided to keep your pets alive and share your rations with them, it caused hatred and ostracism, even from your own friends and family. So very few pets survived World War II in Norway.

My fear when the pandemic seemed to be lasting so much longer than expected was that owners, breeders and handlers would have financial issues, leading to problems feeding their dogs a proper diet! And I dreaded what the end result might be.

In a weird way the circumstances during these hard times have proved significantly different from what I worried about.

Back to my own country of birth: Some of the most dedicated and enthusiastic breeders in Norway, when they saw what was happening around them, were able to get themselves plus a number of dogs across the North Sea to the U.K. with the intention of saving and preserving what some of them had worked toward for a lifetime.

I think I have mentioned her before, but the well-known Norwegian Elkhound breeder Gerd Berbom was among those who with a number of dogs fled the country – and her dogs had a major influence on the breed after the war, both in the U.K. and Norway.

Gerd Berbom’s prefix was Jarlsberg (nothing to do with my favorite cheese, I think), and she is one of the people who the unbelievably successful breeder of Norwegian Elkhounds in this country, a certain Pat Trotter, names as one of her mentors.

Listening to Miss Berbom’s stories about Vin-Melca and California was fascinating even for this terrier and spaniel addict in his early days … But I have to add that she was not only an Elkhound person. After the war I think she introduced the Norwegian Buhund to the U.K. and became a rather prominent influence on the board of the Norwegian Kennel Club – and I even remember serious discussions with her about almost any breed.

In other words, one of those Real Dog People we need more of!

But back to the pandemic …

Regarding dogs in general, this period of isolation has had a huge impact on the pet market worldwide. In the Scandinavian countries I have been told that demand for pedigree puppies of most breeds skyrocketed after a few months. I suppose there is also demand for a lot of the so-called designer breeds – as well as my favorite topic, rescue dogs.

For the first time in decades, I have walked my dogs in an area of suburbia where lots of people walk their dogs. Most mornings I met between 20 and 30 dogs out exercising their owners, but what disturbed me was that only maybe 10 percent were dogs that might have a pedigree.

Speaking with some of the owners, the remainder all had seemingly one thing in common in addition to have Doodle or Pit Bull backgrounds: They were rescue dogs! Proudly declared by innocent and naïve owners who had no idea that they most likely were victims of fraud!

Of course at this time when we see light at the end of the tunnel, we all wonder if many of these dogs wrongly described as rescue dogs now will become real rescue dogs when people return to their regular jobs and social life, which will make these poor animals surplus to requirements.

When last in England I came across an interesting article written by a journalist who had taken upon herself to trace where all these lovely rescue puppies sold at a location in London actually came from. It led her to visit a puppy mill in either Devon or Cornwall where hundreds of these so-called rescues were born, then shipped to London and sold from a private home.

This research had led her to another source, and the next subject on her agenda was to focus on all the rescues brought in from overseas! Mainly Eastern Europe.

I suppose many of us watch talk shows and breakfast TV these days – and isn’t it amazing how much PR these rescue institutions get all the time. People are encouraged to stay away from those unhealthy purebreds and do the good deed: Rescue a rescue!

It kind of amazes me that representatives of the organization we all support and whose responsibility and purpose is to promote purebred dogs are seemingly muted!

In my opinion, every time something is said promoting rescues as well as designer dogs, it is an opportunity for the authorities to respond with information about how much research about health and temperament a future dog owner can benefit from by purchasing an AKC-registered dog from an accredited breeder.

And so far I have not seen any effort made.

I have to finish with a bit of Norwegian history:

Hopefully a few of you will have heard the name Quisling?

Vidkun Quisling was Hitler’s man in Norway during the occupation. After the war, he along with some 37 others were executed by firing squad in 1945 at Akershus Festning in Oslo. One of the wives left behind probably realized that she would never be able to get a job, so she decided to make a living breeding dogs. Sadly, for those of us involved with the breed, the (English) Cocker was her choice. Her timing was excellent as so many families were keen to replace their dogs lost during the war. So in a weird way you can say that she benefitted from the situation her husband Albert and his friends Adolf and Vidkun had created in the country … Starting up with seriously good bloodlines from the most famous English kennels, after even a very short time she proved that it doesn’t matter how you start if your purpose is simply to make money.

I remember someone describing her involvement in the dog world as a very successful revenge for what happened to her husband … Mixing colors, which was in those day a huge no-no (and probably still should be), and coming up with litters of colors impossible due to the colors of the parents, but at that time impossible to prove that the pedigrees were incorrect. Thinking about it, seems like the stone ages compared to modern science and technology.

She basically ruined the breed in Norway for a few decades, but the number of complaints arriving at the kennel club as well as the spaniel club kept the institutions busy and alive for years …

And it was all in reality Adolf Hitler’s fault.

Just another bunch of useless information?

© Dog News. This article may not be reposted, reprinted, rewritten, excerpted or otherwise duplicated in any medium without the express written permission of the publisher.
Tue, 04/06/2021 - 10:57pm