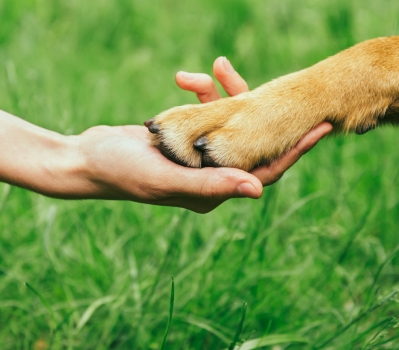 I suppose many of you, like me, got absorbed by interest in dogs based on a “friendship” with a very special pet – in my case, the very first one.

As much as I would like to keep it a secret, my first dog was introduced to me at seven years of age, when I was seriously scared of dogs! Caused by a nasty Wire Fox Terrier in the neighborhood who bit me on my way to school one morning. Kind of ironic, in a way.

Thinking about it later, he was most likely just playful, but as at that stage I had never even touched a dog, how could I know?

This incident made my route to school so much longer, and when the reason for my detour was discovered, the recommendation was: Get him a dog!

Pets of any kind did not exist in the family, except for my mother’s aunt Adelheid, who had a nasty Min Pin named Minnie who I have mentioned previously, as she really deserved to be called a bitch!

But Trulte, as my first dog was named, was truly a mix of anything you could possibly imagine, and had a huge impact on my life. I considered her my friend; she changed my attitude toward dogs from fear to obsession. When a neighbor told me that there were obedience classes arranged by the local dog club every week, that again was life changing, as there I met other people who actually were interested in and loved dogs. I met the first dog I ever showed, a Boxer, that I “kind of “ co-owned, trained and then eventually showed. He was definitely my friend.

After some time I heard that the local branch of the German Shepherd club had obedience classes every week and weekend just a 10-minute walk from where we lived.

Thinking back, it was quite amazing that when my friend and I turned up there, I with my mongrel, but my friend with a GSD, we were immediately greeted by the chairman who was also a breed judge – and made to feel really welcome. And would you believe it, I met a young widow who had problems handling her dog, and Rex became another long-term friend.

So no more Sunday school for this 12-year-old boy, as that clashed with the GSD time – and for me the choice between the two was easy. As helping Mrs. Hansen with Rex was to me a more important mission than listening to stories about real missionaries …

My family, who mainly were Pentecostals, all felt pretty certain that this boy was on the road to ruin and heading for Hell itself. And maybe he still is. Who knows?

I take for granted that you have heard the story about a group of exhibitors who had moved onto their afterlife, which they found rather boring. So they got together and asked St. Peter to contact Lucifer (aka the Devil, I believe) to arrange a dog show/match between Heaven and Hell.

Whereupon Lucifer responded, “Why? You guys from Heaven are bound to lose, as we have all the judges residing down here!”

I must admit that if any kind of dishonesty in the ring as a judge qualifies for permanent residency in Hell, I think my Halo created by honesty and integrity would save me …

To quote John McEnroe: “You can’t be serious?” Probably not.

But what has all this got to do with Respect and Responsibility?

For me at the time it was, and still seems, unbelievable that the owners of the Boxer as well as the GSD trusted a kid that age to take care of their dogs.

And then nearly at the same time I discovered something called Terriers and Trimming – and my mentor, who was an Airedale breeder (and later Terrier judge), let this 12-year-old walk her three adult bitches in one go!

That they took me seriously was proved by their actions: talking about their breeds, supplying me with a “heavenly” amount of literature, taking time to teach me everything from anatomy to grooming to exercising.

The chairman of the local branch of the GSD club, Rolf Brevik, who was also a judge, sat down with me ringside at a few local shows, and also after a few years let me do a few laps in the ring (whenever one of the handlers was close to getting a heart attack) and made me feel part of the scene.

Then my Terrier mentor, an extremely classy Swedish-born lady named Ann-Mari Nagelgaard, who mainly groomed dogs she owned and bred herself, adjusted her schedule to do her trimming after school hours so I could sit and watch. Which I did a day or two a week for two years before she handed me a stripping knife …

What they both had in common was a huge respect for their breeds, significant breeders past and present, and not least of all the history of each breed, including what they were designed for and how and why they looked the way they did.

And a huge stress on sportsmanship, the complicated and responsible job of judging dogs and showing respect for the judges!

When I first visited breeders and shows in the U.K., I was often amazed (and sometimes disappointed) by the way dogs were kept and treated. My tendency to consider my four-legged friends close to human was often in stark contrast to what some of the most influential breeders demonstrated. A number of them were farmers, and the dogs were just dogs and often without a pet name. But then I found that the same category treated older dogs that had been important pillars in their breeding program with a lot of respect.

And in retrospect I think I can understand that these breeders who bred dogs for a purpose, often with large kennels, could not and possibly would not create a personal relationship with a dog they probably would get rid of.

So each individual had to prove itself before being elevated to a different status – and getting a pet name.

I remember one visit to a breeder I found rather callous and unsentimental. He brought out a 16-year-old bitch who had to be supported to do “her business” – and with tears in his eyes he introduced her as Jill, the goose who laid the golden eggs. Which of course changed my perception of the guy, as maybe not getting attached to every dog was in a way self-defense that made tough decisions of eliminations less heartbreaking?

And I think that all of us who have bred dogs for decades have been in situations where dogs, even if they did well, never really got under our skin. While there have been numbers – and in my case a majority of bitches – who in addition to being beautiful themselves and having fabulous personalities passed all this onto the next generation and de facto were the basis for great things both in the ring and future generations in the whelping box. And they will forever be part of the breed’s history!

I must admit that over the years there have been situations when serious decisions about selection had to be made that I wish I were able to distance myself from. Some dogs we had to find new homes for or – in some cases – even put to sleep, decisions without any considerations other than what would be best for the future of the breed!

The same applies to people: Those who helped you on the way and instilled a sense of respect and responsibility will forever be in your head and be objects of your gratitude. While others were simply shadows passing in the dark, muttering something about crooks and corruption …

© Dog News. This article may not be reposted, reprinted, rewritten, excerpted or otherwise duplicated in any medium without the express written permission of the publisher.
Wed, 09/23/2020 - 7:45pm