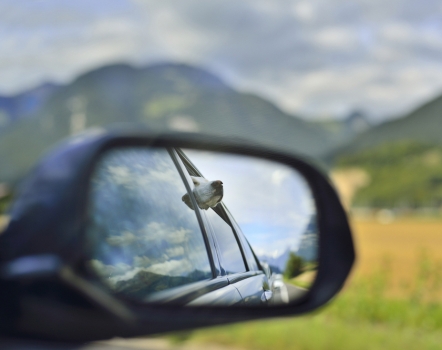 Taking a Look in the Rear-View Mirror

Why are still involved in this world of dog shows after all these years – and are missing it all so desperately now?
By
Geir Flyckt-Pedersen

We have all had plenty of time to ponder over why the hell we are still involved in this world of dogs and dog shows after all these years – and are missing it all so desperately when currently it is considered dangerous to even attend a dog show?

Never thought rumors and gossip were important ingredients in our lives, but as the dog world slowed down, so did the “news flow” about dogs, handlers, relationships between judges and handlers, judges and field reps, board members and even those of us considered rather close to the base line! So maybe I for once was wrong?

But surely as compensation for the lack of current action, we have had – or at least I have had – plenty of time to go through, remember and relive old memories.

Having lived and been actively involved in our special world in four different countries, I have loads of positive memories and experiences, but of course balanced or even outweighed by negatives …

Or is it just that we take all the good things for granted, while any negatives are considered as rather upsetting and of course not in any way justified?

Growing up in Norway, where the dog world is – or was? – very kind compared to many other countries, I was probably rather naïve and blue eyed and initially I had a lot of respect for all those “old” judges who ruled our world. There were very few restrictions regarding judging appointments, even for judges’ opportunities to show at shows where they were officiating themselves …  So very relaxed and uncomplicated. And of course we needed no field reps. Any complaints had to be filed within a number of days or weeks after the event, accompanied by a fee! So very few incidents were in fact brought to the attention of the kennel club, as after a couple of days, things and emotions simply cooled down. And thoughts of revenge in different ways took over.

For a number of years in Norway and Sweden, I was involved with a couple of breed clubs, local all-breed clubs plus peripherally the kennel club, which opened my eyes, highlighting that this Sunday School Boy of Innocence had perhaps led a shielded life.

Conflicts and controversies all of a sudden materialized … and I realized that those ingredients for many were what kept them involved, kept them alive and going. And I must shamefully admit that I found it all seriously captivating and interesting. At least for a while … until I in a way became upgraded to the group of “victims” or “persons of interest” myself.

As long as I kept showing my dogs, and even other people’s, with moderate success, the world seemed kind – as did my fellow enthusiasts.

The first incident that left a bad taste was at a show in Denmark in 1968. Winning the breed, Giant Schnauzers, in tough competition and returning to the bench, there was a strong smell of pesticide and the dog would not go near it! I still wonder – why?

When I (or rather hopefully the dog) won “my” first all-breed Best in Show, I noticed a change in the attitude of some friends. And when one of my cockers (English) won not only “Cocker of The Year,” but also Top Sporting Dog, I sensed that some of my good breed friends were no longer as good friends and as supportive anymore. Which of course hurt a bit. And it wasn’t even my fault – those bloody judges were to blame!

Then it happened a couple of years later: My imported Welsh Terrier was the first in history to win Dog of the Year in both Norway and Sweden in the same year. Proud as punch and expecting serious celebrations, I came to the conclusion that the competition was more exciting than actually having won!

Another incident that I can never forget happened at a show in Gothenburg, Sweden, when we found a piece of glass wrapped in liver inside the dog’s crate. He must have sensed that something was wrong, as he didn’t touch it.

But just earlier the same year (still living in Norway), when it seemed likely the Welsh Terrier would be a serious contender for the Dog of The Year title in Sweden, there were voices raised to change the rules so only dogs owned in Sweden could compete for that title!

But the suggestion came too late.

The following summer we decided to move to Sweden, which in many ways to me was a very important decision. We kept a fairly large number of dogs and did really well in the show ring, but the consequences of being an immigrant were obvious in a number of ways.

A few years later – and now residing in Sweden – we were about to repeat the success in both countries in the same year. Would you believe it: There was a motion in Norway regarding Dog of The Year as well as Terrier of The Year, proposing an immediate rule change so only dogs owned by a person living in that country were eligible to compete for those titles …

But we won it anyway.

After some six years in my new country, and with a record as breeder and exhibitor during those years not matched by anybody, it was suggested I should at the same time as my wife apply to join the judges education program. My wife was initially turned down, but then was accepted, while my application was turned down with the argument that my experience was mainly outside of Sweden!

Our next move was to England, which was de facto initiated by the acquisition of a British company, but we moved lock, stock and barrel – which initially included 35 dogs that had to go through quarantine.

In previous years my wife had gone through the qualification process and was an FCI judge for all spaniels, which she by then had also judged on many occasions.

I was still not awarding Challenge Certificates anywhere, but had extensive experience judging all breeds at Open shows plus a number of breed shows both in Scandinavia and England.

Invitations arrived for both of us to judge (English) Cocker Spaniels at championship level.

And would you believe it: My application was approved by the breed club as well as the Kennel Club. And if you didn’t know it already, breed clubs in the U.K. had and still have more influence over who judges their breed than anywhere else in the world. The Cocker club refused to support my wife’s application, as her judging background was all in Europe … And the KC followed the club’s decision.

The fact that she had been one of the most successful Cocker breeders in Sweden for decades and de facto was an FCI judge, had owned more English champions of the breed than most English breeders etc., etc., was of no importance …

Well, after a few years some sensible members of the KC’s judges subcommittee reversed that decision. She was given the credit she deserved, and the go-ahead to judge her breed with Challenge Certificates in England as well.

Then for a couple of years we went back to Sweden – and it really made me feel important that even before the move was finally decided, we heard through the grapevine that the Swedish Kennel Club’s judges committee had decided which of the breeds we had added to our register under KC rules they would let us judge under FCI/SKK rules.

Returning to the U.K. was a rather undramatic experience, but after another decade there, it was time to set sails for America. We both had judged there on multiple occasions – my wife even the English Cocker and Greyhound national specialties, and I Montgomery and a number of other important shows.

Anyway, to make a long story a little bit shorter: We were both told that being U.S. residents, our European credentials and breeds were of no significance. My wife decided she would never judge over here, but I decided to go ahead. And less than a year after judging the Terrier Group at Crufts, I judged Terriers as a provisional judge in Louisville, which many of my friends described as an insult, but I had no problems with it. When in Rome etc., and if you take the time to study breed standards, there are significant differences, so severe in some breeds that you really need to be re-educated. And had I been unable to pass the breed tests in my new country, maybe I shouldn’t judge at all …

I can understand that each country fights for justification of whichever adjustments they have found necessary to initiate in standards. Sadly, in countries where the standards are “owned” by breed clubs, it has given the people in power the possibility to adjust them to fit what they were able to produce themselves instead of following the standard from the country of origin, which I think is practice in all FCI countries.

But “I Have a Dream” in this day and age when the world is getting smaller, and with so many breeders working together across borders and standard differences, that one day AKC, TKC and FCI will all get together and decide for all breeds globally to be judged by identical breed standards, based on what the original breeders were hoping for and dreaming of.

I still think that regarding requirements and education to get your “judge’s status,” you should be subjected to the rules of your chosen country of residence …

Which could make a difference on so many levels!

Until next time … Stay safe!

© Dog News. This article may not be reposted, reprinted, rewritten, excerpted or otherwise duplicated in any medium without the express written permission of the publisher.
Fri, 10/09/2020 - 7:03am