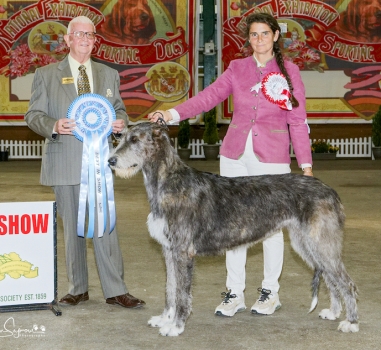 Checking in at two high-profile British shows, Birmingham and Richmond
By
Geoff Corish

One of the major shows in the U.K. is Birmingham National. It’s a show we refer to as representable, which means every breed that the Kennel Club allocates Challenge Certificates to is scheduled at this show. So everyone has a chance at a CC, plus the show is held again at Stafford, where we have lots of indoor shows and very accessible for exhibitors from every part of the country.

It’s been two and half years since the last one was held, due to Covid, of course, but I doubt anyone could have imagined the entry there would be: 9,490 dogs, the second highest since the last Crufts was held. It’s commonplace now for us to see overseas exhibitors showing: A U.K. champion is one of the greatest titles you can win, because entries are so high and so is the quality. So to win here is quite an achievement. But more later on that subject. We also see many of the top judges from Europe judging; among these is the ever popular Ann Ingram from Ireland, and it was her BOB that went all the way to Best in Show. 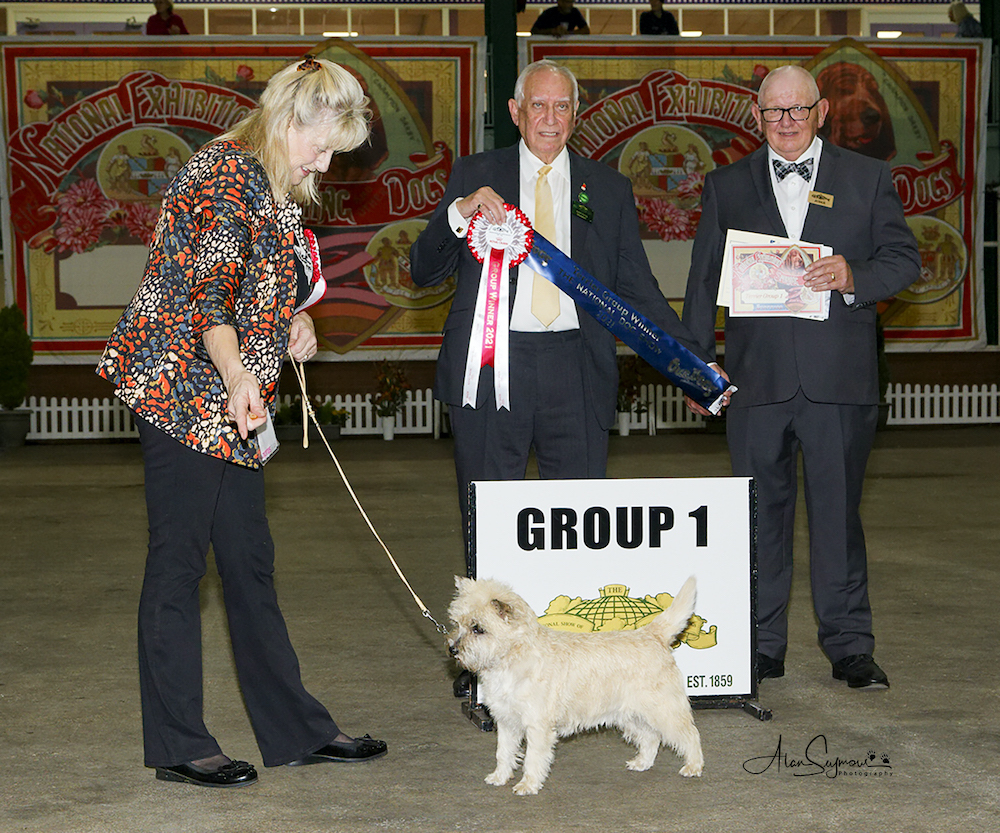 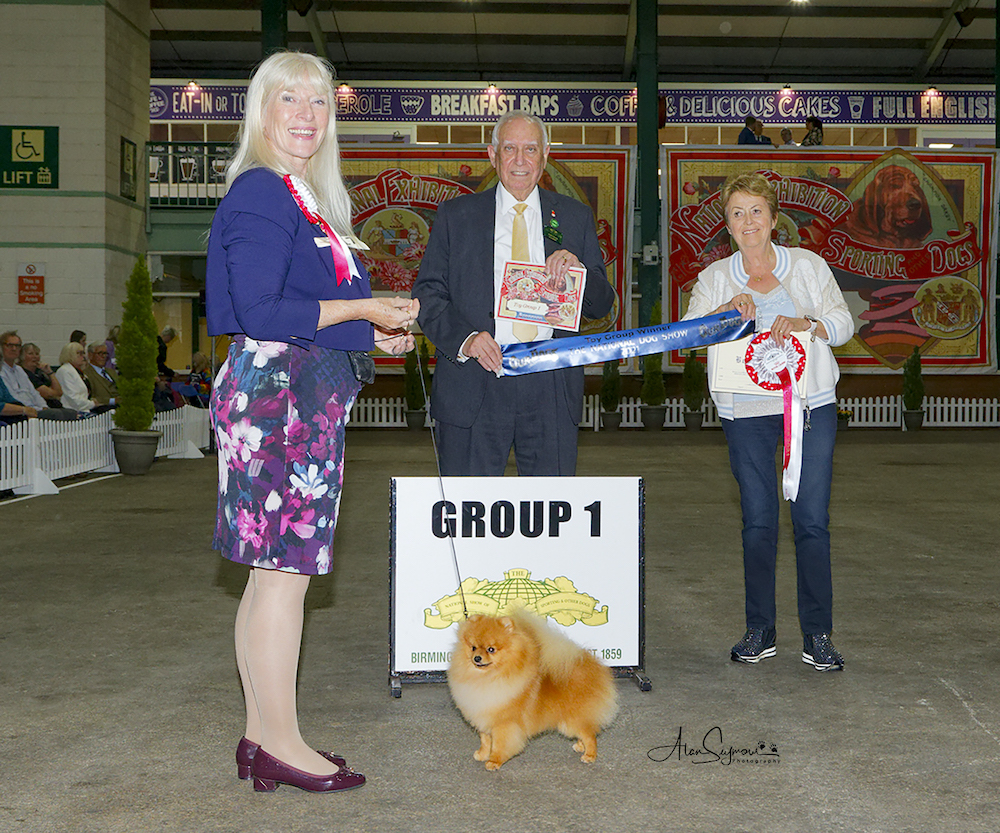 In Toys, that went to the well-known Lireva Pomeranian kennel, Lireva Wildest Dreams. 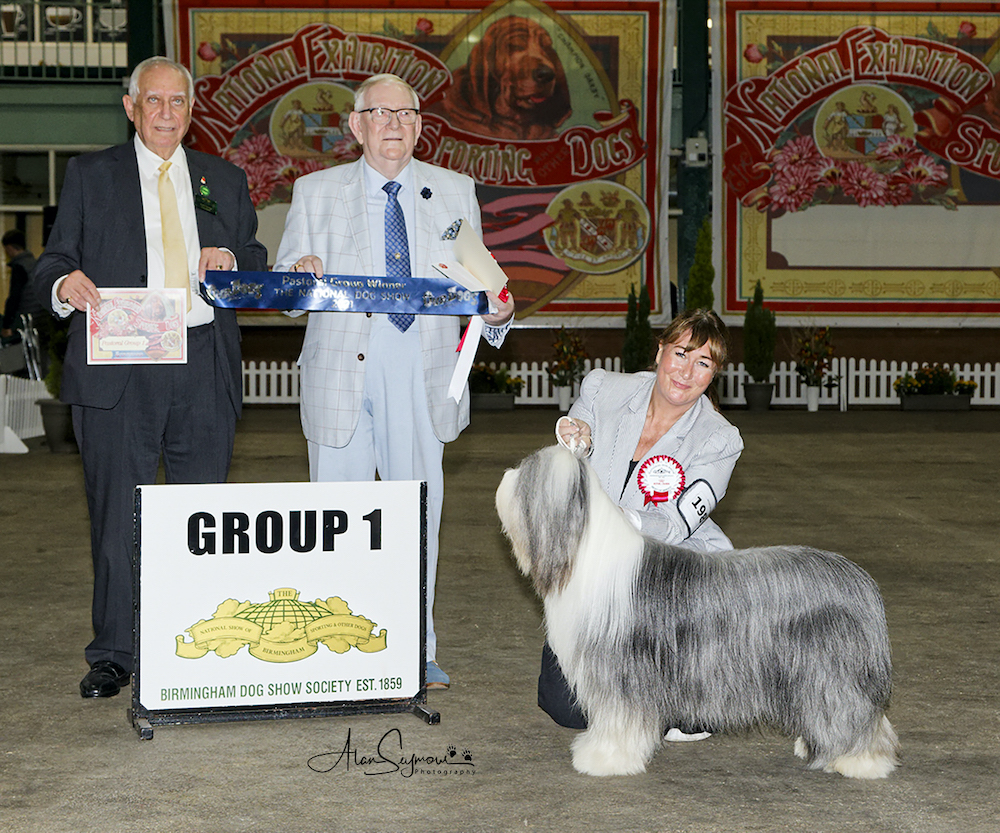 Herding was won by a Bearded Collie, Corimist Glamour Girl. 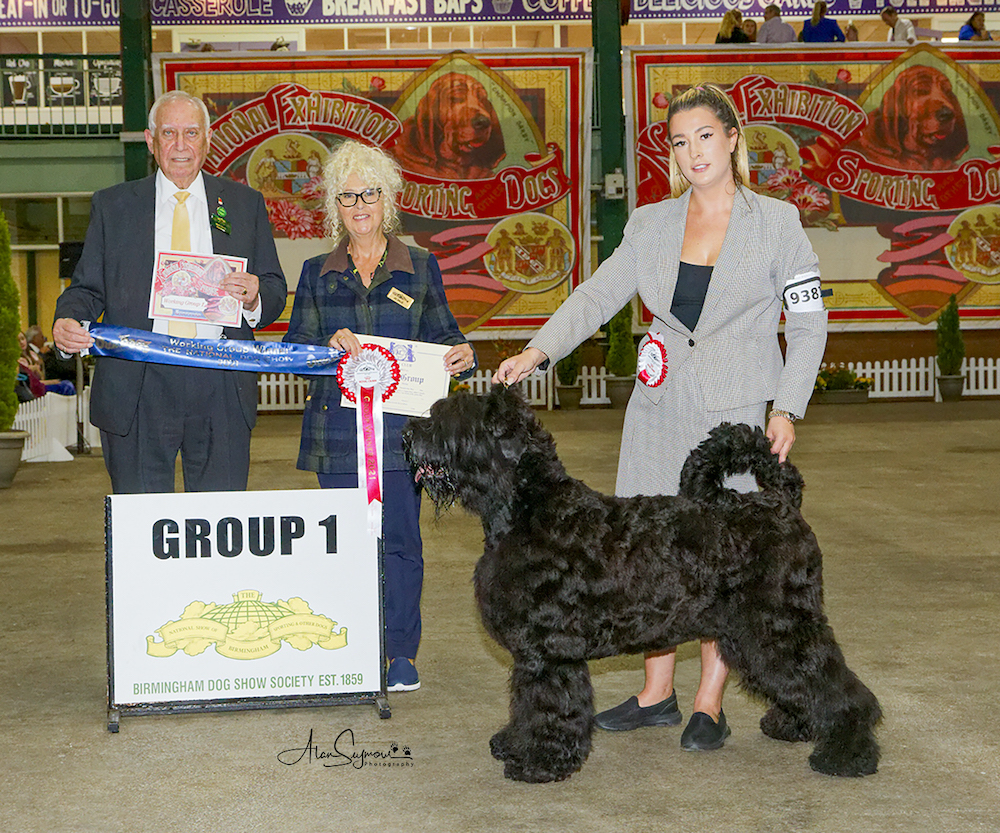 Working, another new face in the Black Russian Terrier, Proud of Being Eva Gardner. 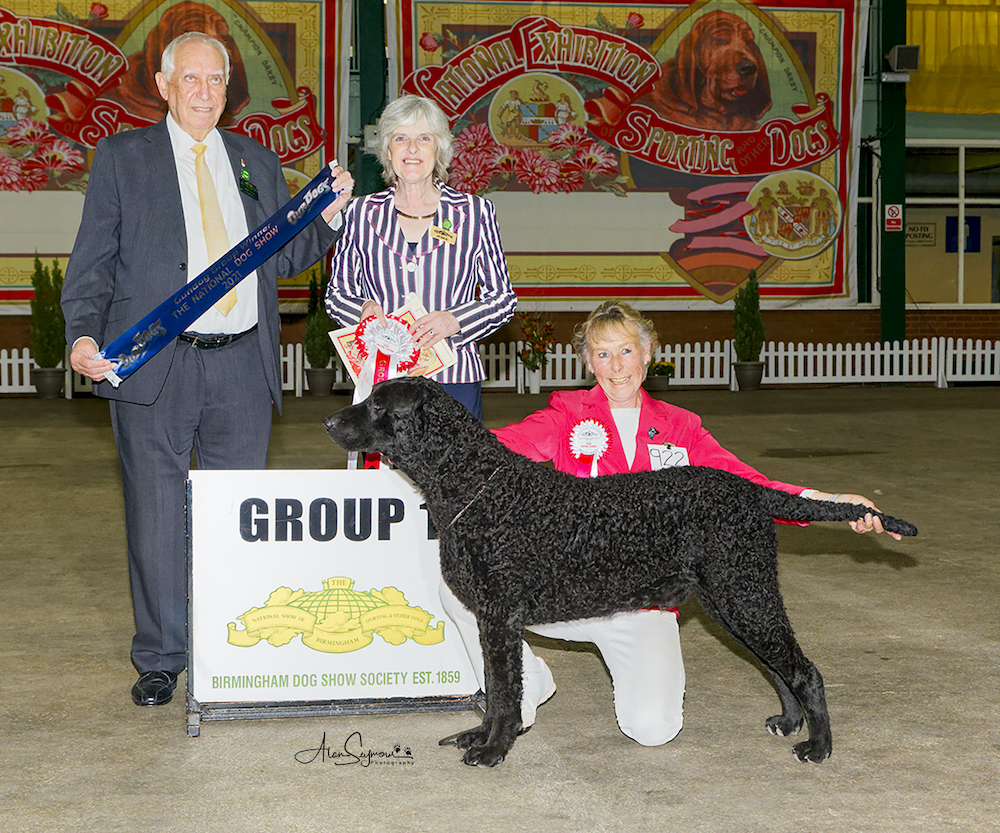 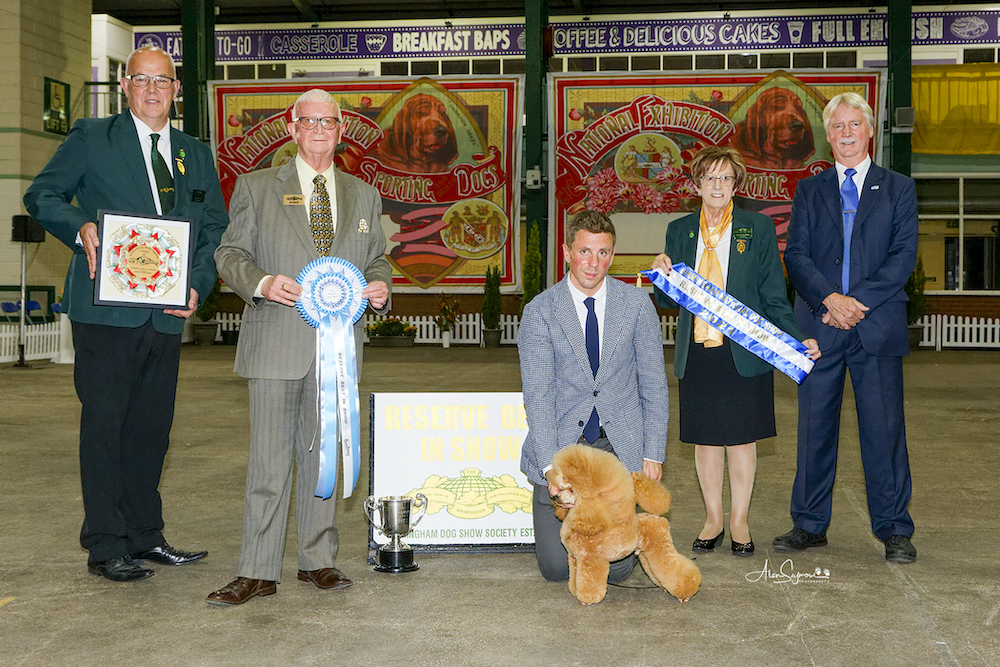 And so to the final awards of BIS and Reserve BIS: Reserve first, and that was awarded to the apricot Toy Poodle, Afterglow Agent Orange, handled by one of its owners, Tom Isherwood. 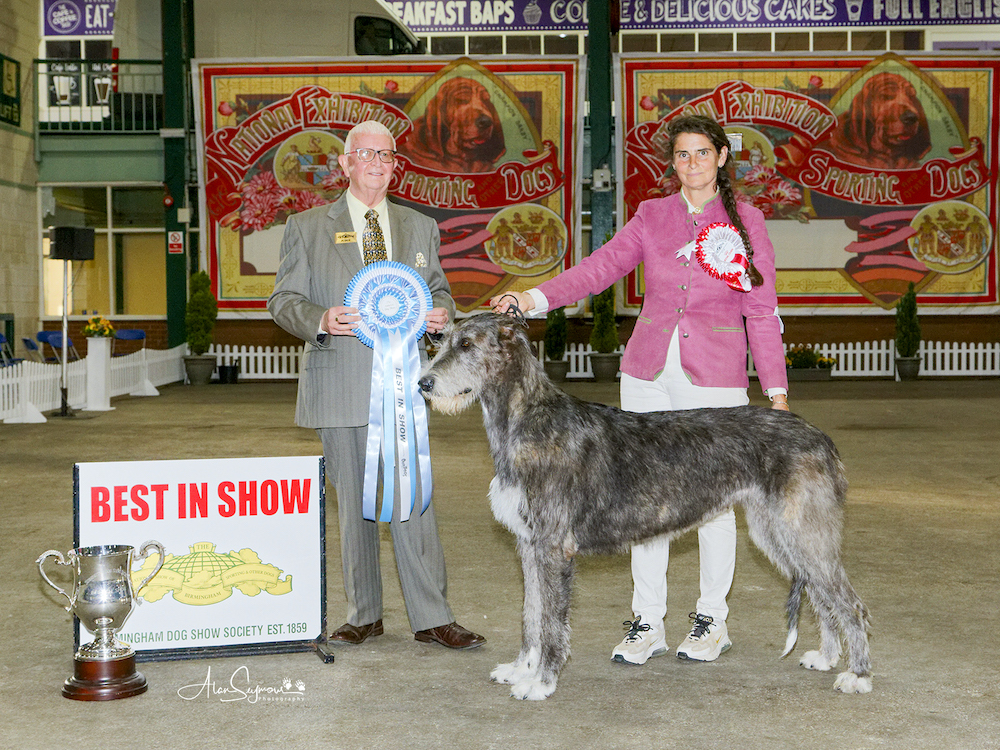 BIS was awarded to the Italian-owned and bred Irish Wolfhound, Sarabi Della Bassa Pavese, owned and handled by Ludovica Salamon, who is also a veterinarian in her home country. This is her fourth homebred U.K. champion. Bitches in this breed was won by the lead singer of the music group The Real Thing, Chris Amoo, also a previous Hound Group winner. It’s not often you get both CC winners being group winners, too, but both Ludovica and Chris and his wife Julie, have not only been great friends but friendly rivals, too, and have given each other stock to carry on their breeding programs. Interestingly, the last time an Irish Wolfhound won Best in Show at a general championship show was actually Chris and Julies’ UK Ch Caredig Kava of Sade. Kave appears seven times in Sarabi's pedigree and was sired by an American-imported dog Ludovica owned, Int Ch StoneyBrook Kiowa at Della Bassa Pavese.

Richmond is the most southerly championship show we have. In days gone by the society owned its own showground, but sadly it was under the flight path for Gatwick Airport; trying to have a conversation at times was, to say the least, difficult. Now the show is held on the grounds of a country estate and hall. Because of its situation, it doesn't get the biggest of entries, which is a shame as it’s a very well-run show, and for judges, close to both Heathrow and Gatwick Airports. 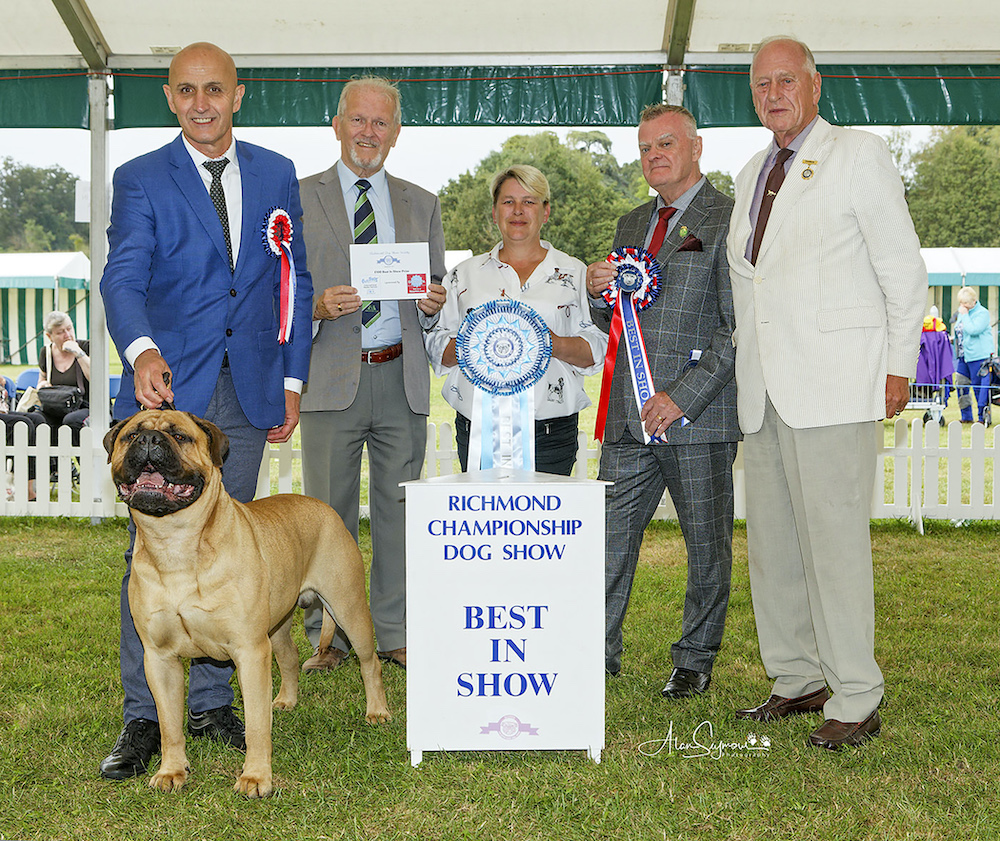 There was a new face to Best in Show winning in the Bullmastiff Ch. Optimus Danzy Jones, owned by Peter Myers and Deborah Morgan.

They had imported frozen semen from the U.S. from the sire Am Ch Dal Primo In The Making. Known as Seven, he was a big winner in the U.S., with drive and reach and a superb topline. The breeder/owner in the U.S. is Crystal Corner. They own the dam, Int. Ch. Optimus Rhondda, who is the current bitch certificate record holder with 38 certificates. 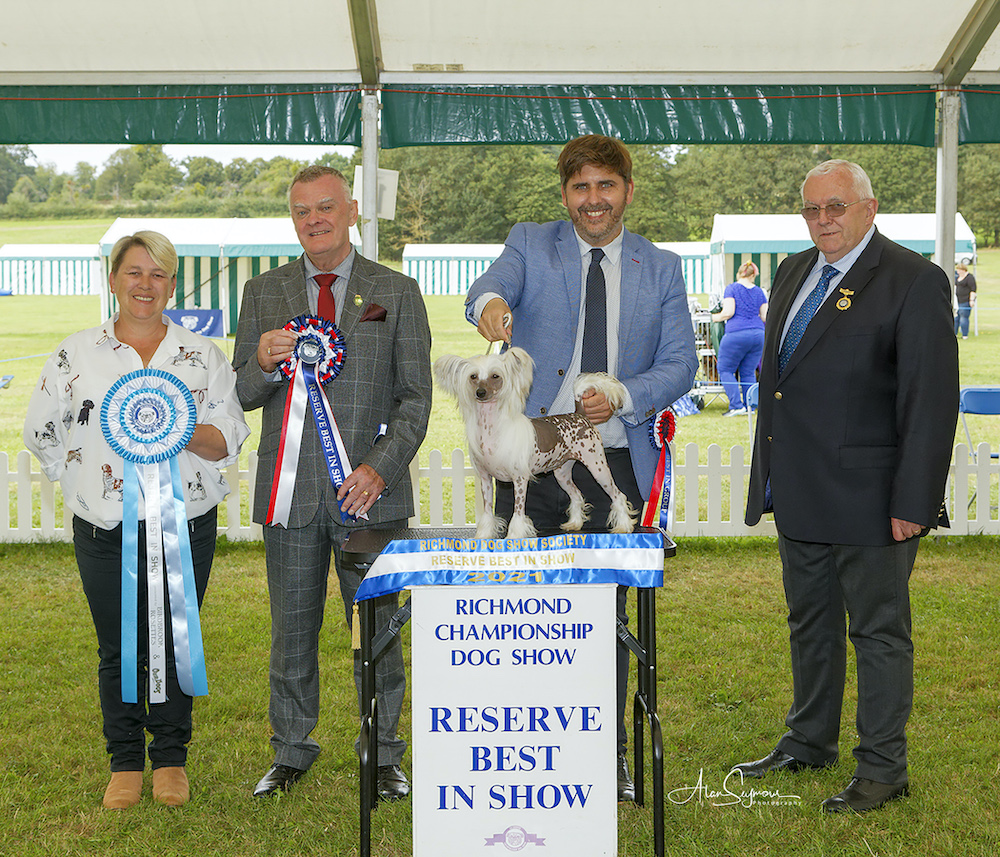 For the Reserve Best in Show award, that went to a more regular face in Robert Dunlop and Stuart Payne's Chinese Crested bitch Ch. Habiba Hold My Purse.

© Dog News. This article may not be reposted, reprinted, rewritten, excerpted or otherwise duplicated in any medium without the express written permission of the publisher.
Tue, 04/12/2022 - 9:24am