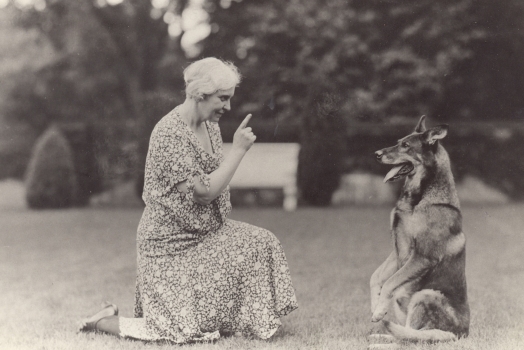 "Ma Dodge," as she was affectionately known, with the canine celebrity Rin Tin Tin.

Morris & Essex, Then and Now

On the heels of the alternate, hastily planned but perfectly executed Westminster Kennel Club dog show comes the long-awaited (six years in the making, instead of the usual five) Morris & Essex Kennel Club event, to be held Wednesday, October 6, 2021. As you know, the show was postponed last year due to the Covid-19 pandemic.

Created by socialite and philanthropist Geraldine Rockefeller Dodge, the Morris & Essex Kennel Club Dog Show was and still remains one of a kind. Mrs. Dodge’s personal wealth alone was estimated at $100 million, excluding her husband Marcellus Hartley Dodge’s immense fortune. Tragically, all that vast wealth couldn't prevent the death of their only child, son Marcellus Hartley Dodge, Jr., a recent Princeton graduate who was killed in a car crash in France in 1930. An early supporter of the Seeing Eye Dog organization, Mrs. Dodge established St. Hubert’s Giralda animal shelter, which housed the homeless dogs in the surrounding areas. Named after her kennel name, Giralda, and St. Hubert, the saint of dogs and hunting, today it is one of the most respected and copied shelters in the country. Presently located in one of the barns on the former Giralda estate, it was endowed with several million dollars after Mrs. Dodge’s death. The country farm in New Jersey was not the Dodges’ only residence: They owned a huge townhouse with a garden on Manhattan’s Fifth Avenue, which as an interesting aside was offered to the American Kennel Club for their headquarters; they declined. It is now the site of a very expensive co-op apartment building.

Mrs. Dodge was an avid breeder and exhibitor well known for her German Shepherds, English Cocker Spaniels and Bloodhounds, among other breeds. An internationally well-respected judge, and author as well, she was the first woman to judge Best in Show at the Westminster Kennel Club in 1933. She was an amazing and unique woman for her time, whose love of dogs – as well as her wealth and prominence in American society – brought the sport to the public eye.

The first Morris & Essex show was held in 1927, and for 30 years as many as 50,000 spectators attended this annual event. The Morris & Essex Kennel Club dog show, named for two of the counties in New Jersey, ended in 1957, when an aging Mrs. Dodge could no longer handled the rigors of running such a huge dog show. Mrs. Dodge passed away at the age of 91 in 1973, ten years after her husband’s death.

© Dog News. This article may not be reposted, reprinted, rewritten, excerpted or otherwise duplicated in any medium without the express written permission of the publisher.
Mon, 08/16/2021 - 9:55am