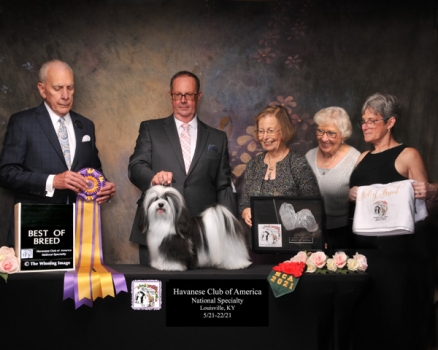 The Havanese Club of America held its National Specialty in Louisville, Kentucky, this May 17-21 at the Crowne Plaza Louisville Airport Hotel. The show was originally scheduled for October 2020 and postponed due to the pandemic.

We are all very grateful to Sara Dellorto for her extremely successful chairmanship, which was complicated by Covid-19 rules. Thanks also to Liz Simon, our tireless ring steward and Juniors judge, and to Susan Gordon, our show secretary.

There were more events this year than ever before: three conformation specialties, two agility trials, three obedience and three Rally events in addition to sweeps, junior showmanship and 4-6 month puppy competition.

We were all so eager to have some fun and be together again! The theme this year was “Run for the Roses,” so we had cocktail events with a doggie race, a derby-hat contest and a handling event for senior persons! We also had the first run-through of our new judges education presentation, and our Havanese club annual meeting. Evenings brought a Havanese rescue dinner with live auction and a Havanese Club of America dinner with auction and raffle.

Our first event on Tuesday was Agility, skillfully managed by Leslie Sprick, and judged by Mary Mullen. This year there were two trials, both held in the hotel, which was great for fans to watch.

In Trial # 1 - 25 dogs participated in Standard, 17 in Jumper with Weaves. Eight qualified in Standard, seven qualified in Jumper with Weaves. Double Q in Master level in Trial #1- Cherry Windlinger with Bexar, Sandra Allen with Ninja, Diane Perfelice with Pepe, Joyce Coleman with Woody, Leslie Sprick with Ace. High in trial was Cherry Windlinger with Bexar.

Tuesday ended with a welcome event: cocktails, hors d’oeuvres and a fun contest called “Two Truths and a Lie.” Each of us wrote our own two truths and one lie, and others at our table tried to guess the lie!

High in Trial: Woodstock A Piece Of My Heart. Owner: Joyce Coleman. 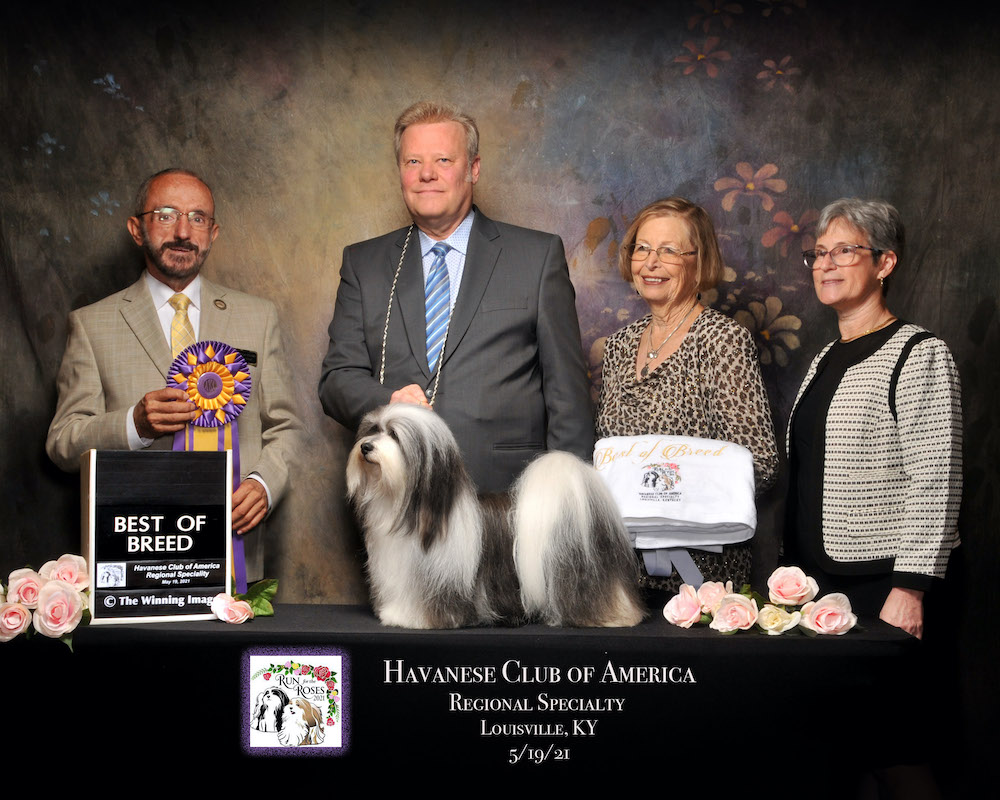 Award Of Merit: CHB Kolmar’s and Los Feliz The Man Of Steel

The evening brought a cocktail event: Best Derby Hat. It was hilarious. Contestants strutted down the runway like models with lots of “action.”  It was a time for laughter and reunions with friends. 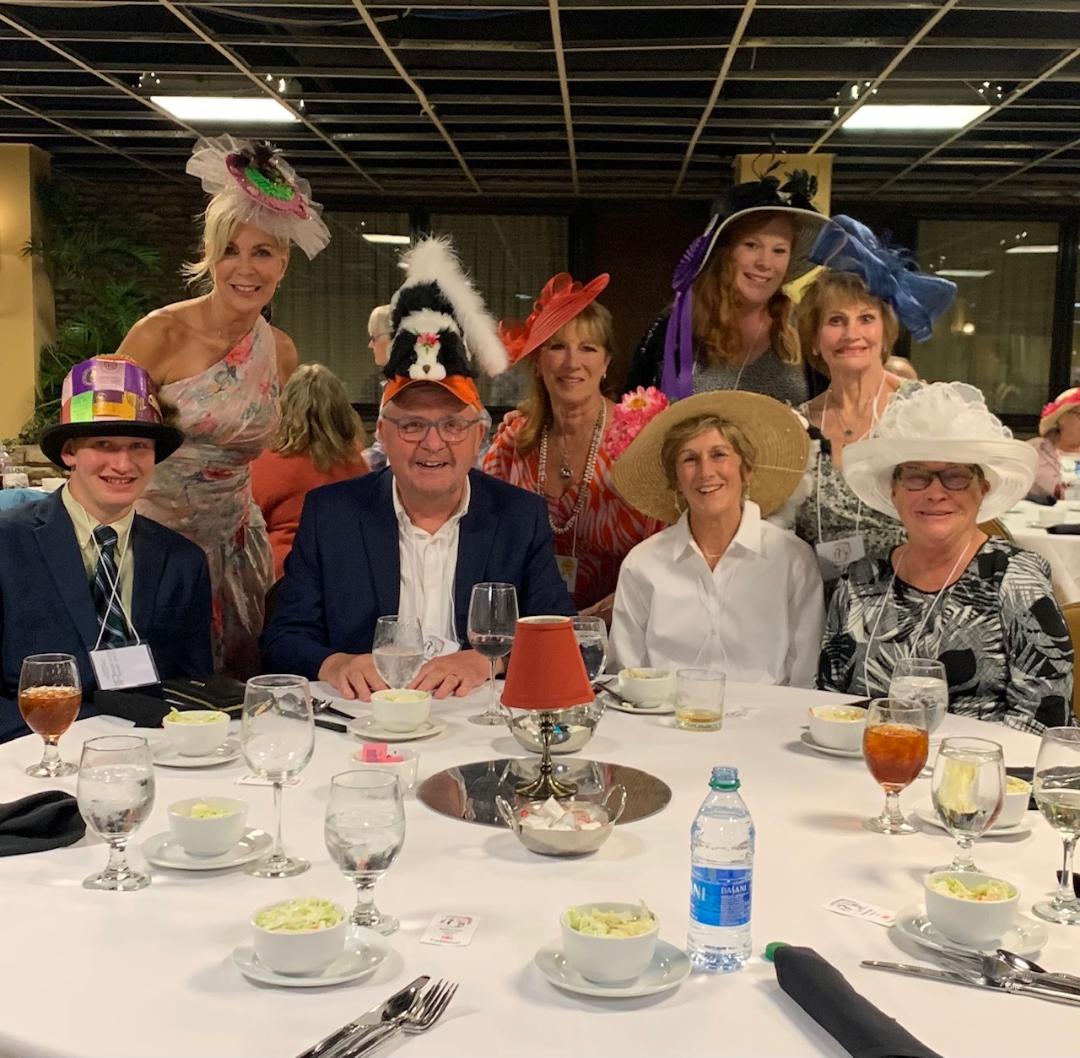 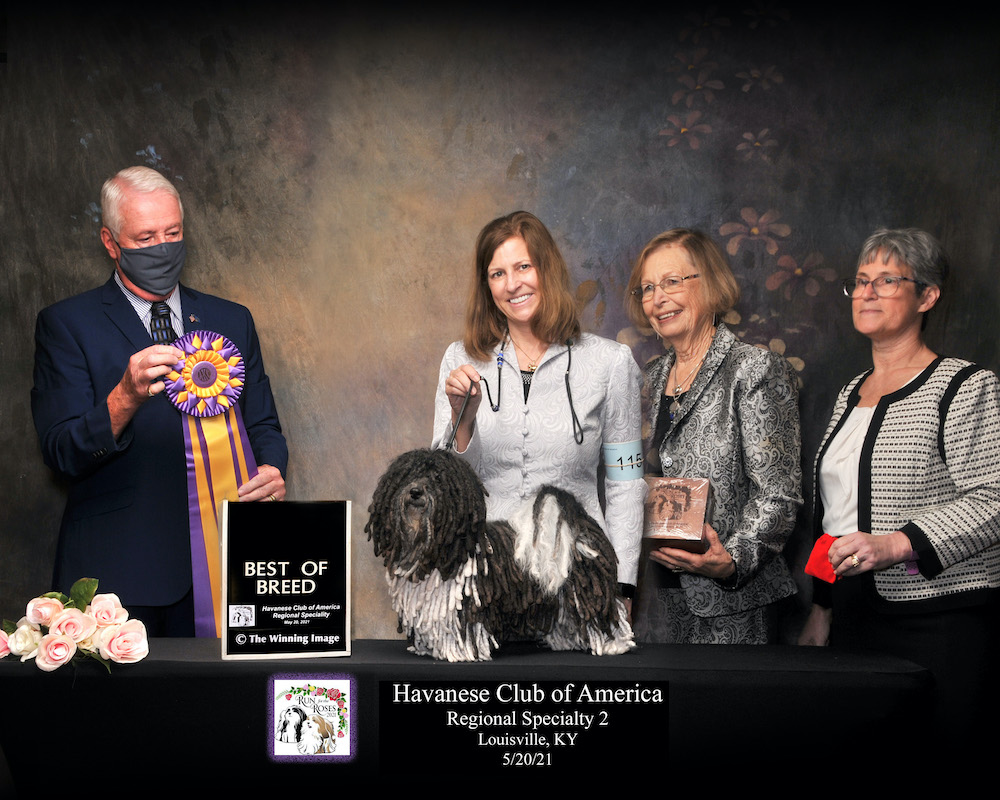 Award Of Merit: GCHB Kolmar’s And Los Feliz The Man Of Steel

After the conclusion of the regional specialty, the new Judges Education Presentation was given for judges. Jennifer Clevenger presented. This is a “work in progress” and changes may be made in the future.

A wonderful doggy Run for the Roses, cocktails and a gala dinner hosted by Havanese Club of America followed the show. There were many winners at the raffle and live auction, both filled with amazing donations. 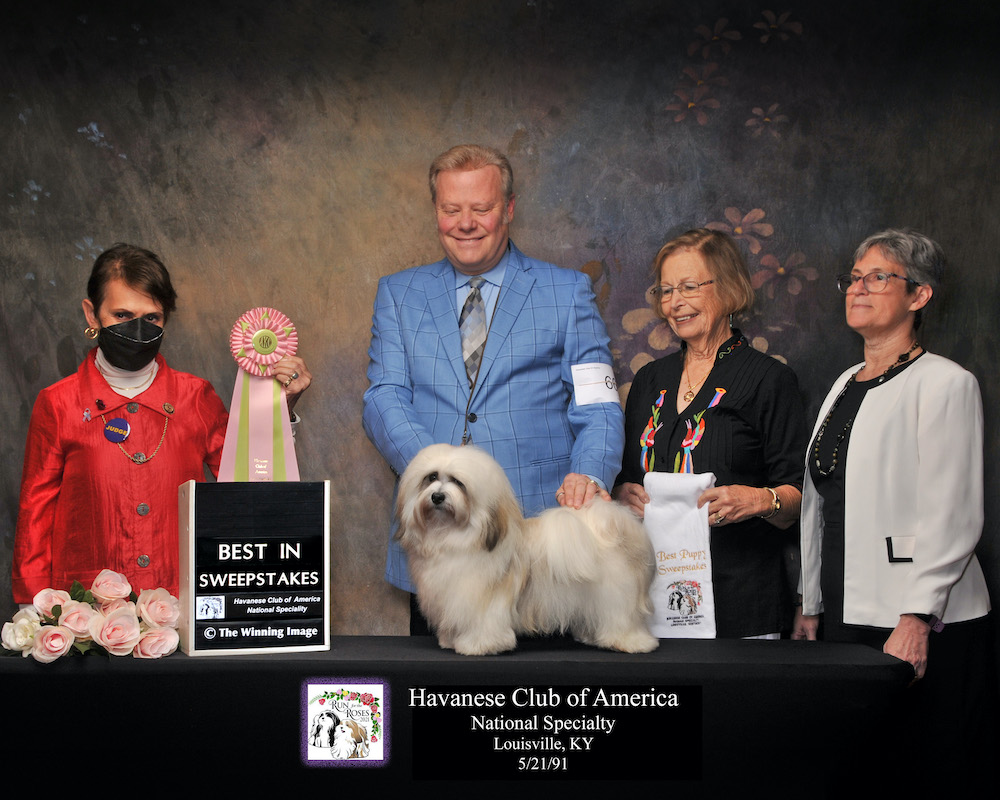 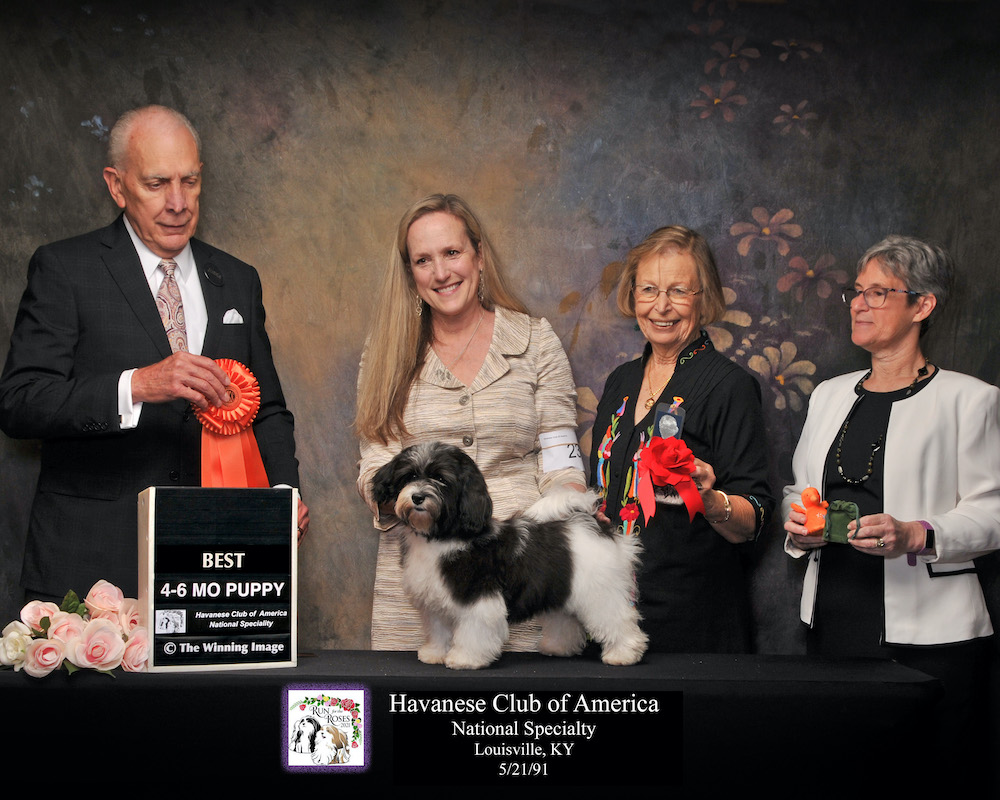 Next began the judging of the National Specialty dog classes. Following that, the annual meeting of the Havanese Club of America took place.

The evening event was the annual Havanese Rescue Inc. gala dinner and live auction. The centerpieces were muslin dogs dressed in custom-made costumes of all sorts that were sold for the benefit of the rescue, a 501c3 charity. There were 12 auction items and there was very active bidding, the top being a one-of–a kind silver cuff with a Havanese made by member Carol Croop. Havanese Rescue Inc. is a nationwide all-volunteer organization, so all proceeds go for dog’s expenses. 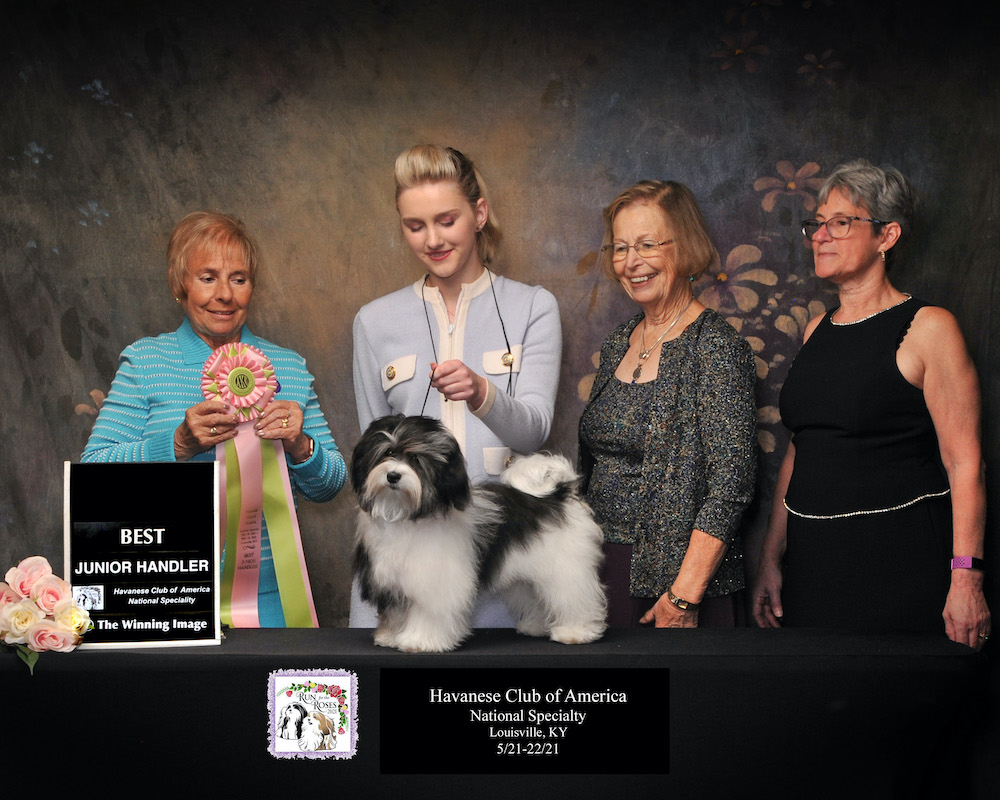 The winner was Emma Gallaway showing a puppy, Belle Sun’s Change It Up. 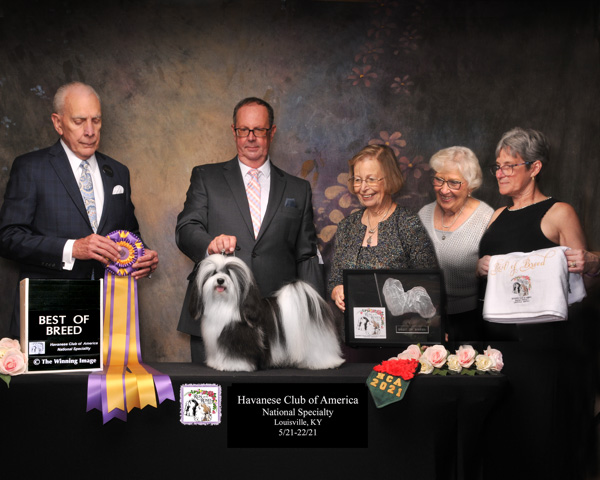 Brace: GCH Beseme’s Go Plenty To Be Thankful For and Beseme’s When Only The Best Will Do.

After all this excitement, a bit of fun: a “class” of Senior Showmanship entrants (over 65) being judged on their handling skills! It was won by Beverly Vics. She is a good handler – no doubt about it – but was impressive in being able to kneel and rise with grace!

The new judges education presentation was then offered again, this time to anyone who wished to attend. It was presented by Adam King. It made a fine ending to a most successful specialty. We will all return to Louisville next year in August for our 2022 National Specialty.

© Dog News. This article may not be reposted, reprinted, rewritten, excerpted or otherwise duplicated in any medium without the express written permission of the publisher.
Sun, 06/13/2021 - 9:30pm