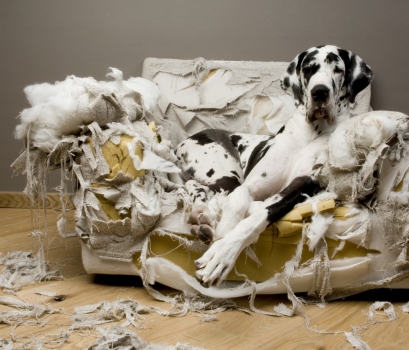 Your dog might be in the driver’s seat, and you don’t even know it
By
M.J. Nelson

At some point, every dog owner likely has had tiny doubts about just who was the one being trained. Were they training the dog, or was the dog actually doing the training? Most folks probably would guess “a little of both.”

I disagree, as I believe it depends on where the training occurs. If the training takes place in the field, for example, it’s almost 100 percent me or the dog’s professional trainer doing the training. If it’s around the house, sad to say, the dog clearly has the upper training hand, and I know I’m not the only one who pleads guilty to that charge. The problem is that dogs are so clever and subtle about training us that we don’t realize we’ve been trained until it’s way too late to do much about it. If we were half as good at training them as they are at training us, every dog would be a field, obedience, agility or tracking champion, no doubt about it.

Let’s take just one aspect of life around my house as a simple example. I like to think I’ve taught my Chesapeake to sit before I put his food down, but that’s definitely not how he views it. From his perspective, once he sits down to the table, so to speak, that’s my cue to serve his meal. He has, figuratively at least, unfolded his napkin, tucked it in his collar and is ready for the entrée. He regularly makes polite conversation while he’s preparing to sit, which I take to mean he’s telling me he’s starved, the food smells good, and what took so damned long to get it ready –while I stand, like his personal waiter, holding his “plate” until he gets comfortably situated for his meal.

Dogs are capable of teaching some pretty elaborate concepts. My Ches, for example, has convinced me that anywhere we go in the house, he’ll “walk point,” the most exposed position in a combat formation as the lead element moving through enemy territory. This also applies to entering the house or the front seat of the truck. When I’m in the bathroom, he has shown that he’ll always be on sentry duty outside the door, ready to dispatch any terrorists foolish enough to happen along and disregard his canine “Who goes there” challenge. 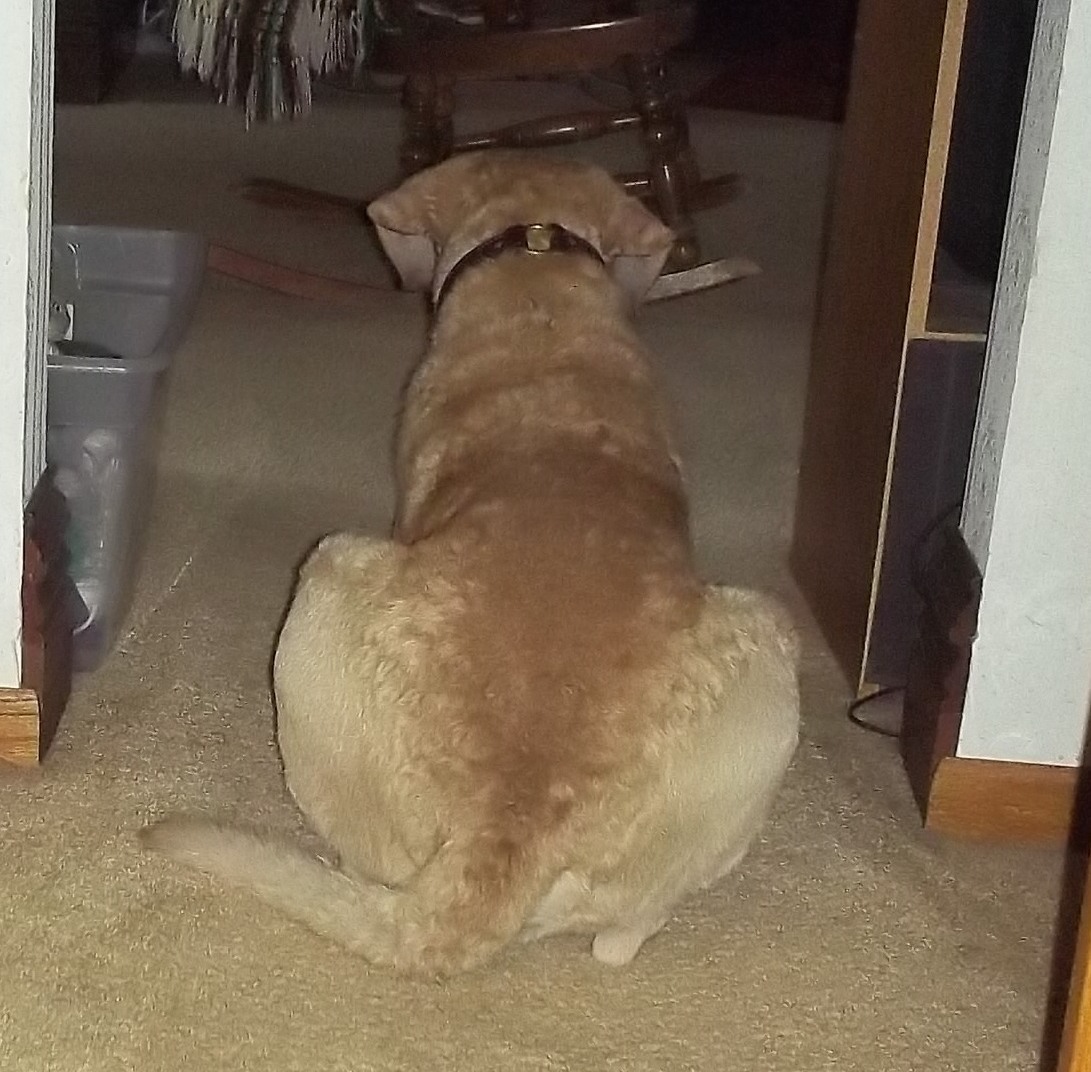 Not one member of Al Qaeda, ISIS or Antifa has gotten past this Chesapeake to create carnage in the bathroom.

In this, he is much like the late, wonderful comedian George Gobel, who spent World War II in Oklahoma as a flight instructor in AT-9 aircraft and later in B-26 Marauder bombers. When he spoke of his WWII duty, it invariably earned him a laugh, and Gobel responded, in his low-key, folksy style, “Go ahead and laugh, but if you think back, there was not one Japanese aircraft got past Tulsa.” My Chesapeake has as good a deterrence record as First Lieutenant Gobel. Not one member of Al Qaeda, ISIS or Antifa has gotten past him to create carnage in the bathroom.

Airedales belonging to a friend of mine taught him and his wife to keep all toilet-paper rolls stored at least six feet off the floor and behind closed doors. The instruction period began one day when he returned home to find toilet-paper streamers throughout the house. His first thought was a break-in, but a check of the doors and windows, all of which were locked and intact, made that explanation less likely, as was the fact that nothing was missing. Since his wife was visiting family in another state, she wasn’t a suspect. However, a friend with a reputation as a prankster would have been, except he also had an iron-clad alibi, having spent the entire day in a business meeting 100 miles away. So, the perplexed Airedale owner was left with no answers and a messy cleanup.

The next morning, before leaving for work, he made certain all the doors and windows, including the basement windows and the door to the garage, were secured. But when he returned home that afternoon, the house was again decorated with toilet-paper streamers. Somebody had to be getting in, no doubt about it, but how?

He decided to check with his stay-at-home next-door neighbor. “Nope,” she said. “I was outdoors nearly the entire day working in the garden and cleaning up around the house. Nobody came near your house or mine all day.” The result? Still no answers, but another messy cleaning job.

Day three featured a repeat of the first two, except this time the mess was discovered by the Airedale guy’s wife, and there was a clue. One of the dogs still had bits of toilet paper clinging to its whiskers. So a crime-prevention program in the form of removing the toilet paper from its spindle and putting the roll high on the bathroom windowsill began.

Ah, it’s never wise to underestimate the perseverance of dogs in teaching mode. 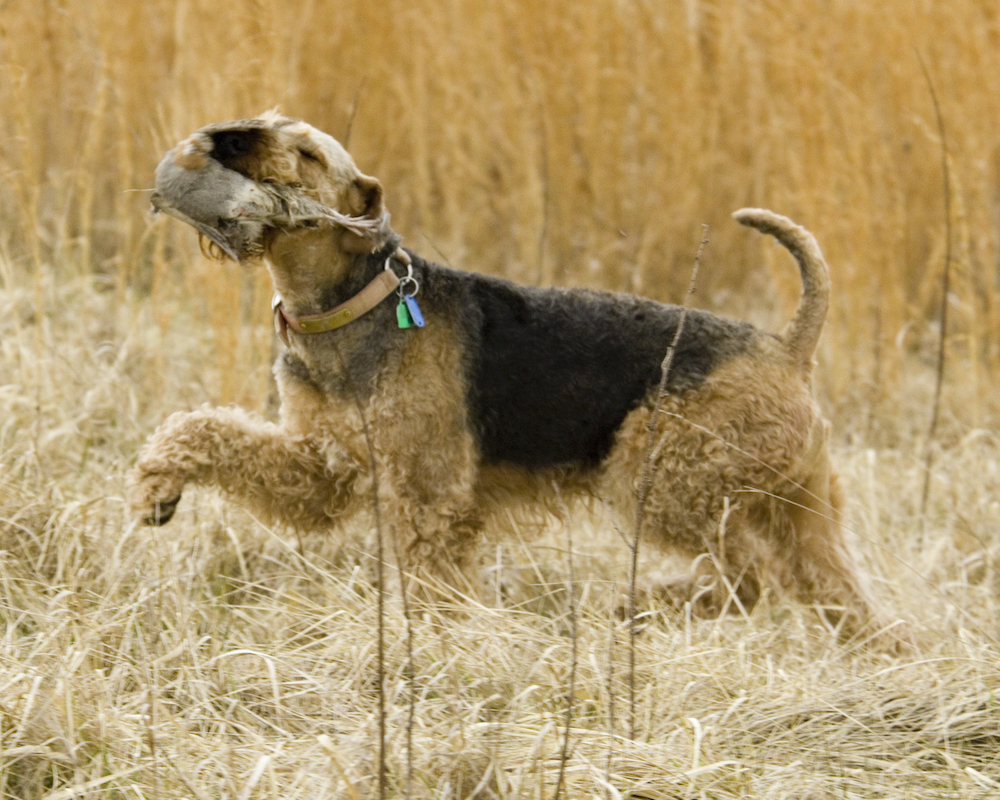 One of the two Airedale participants in the toilet-paper caper.

When the Airedales’ owners returned the next evening, the interior of the house was, once again, festooned with toilet paper. With that, it became clear that, inconvenient though it might be, the only way to avoid being greeted by toilet-paper streamers each night was to keep the rolls high on shelves behind closed doors.

My late pal, Ray Gammon, who was an FBI agent for virtually all of his working career, had a Labrador Retriever that was an accomplished “salesman,” particularly when the prospective “buyer” was Ray’s wife, Dorrie. Whenever Ray would leave town – in fact, the second the car exited the driveway – Reb would immediately take Ray’s spot on the bed, even though he never ventured into the master bedroom when Ray was home.

In no time at all, Reb had sold Dorrie on the idea that he was the superior bedmate. When the dog jumped on the bed, snuggled down beside his lady and got his head comfortably waggled into Ray’s pillow, he stayed there all night with scarcely a twitch – and then only during a particularly active dog dream. 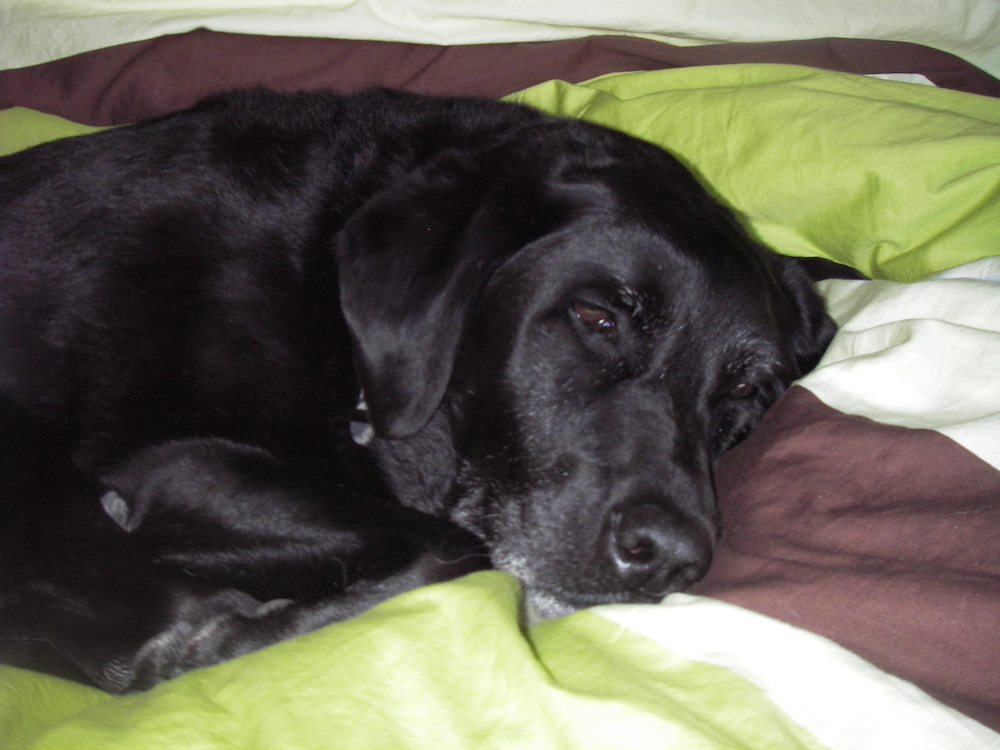 Reb, the FBI agent’s Labrador, was cuddled and pampered, enjoying all the comforts of home and hearth while his owner was rescuing kidnap victims, chasing bank robbers and dodging bullets.

Dorrie said that it was clear that Reb was much better at leaving the stresses of his job – playing with their kids, finding and fetching ducks and pheasants during hunting season, moseying around the house – at the end of the day than was Ray. Of course, the fact that Ray supervised many of the most difficult cases handled by the Minneapolis division in the 1960s and ’70s – including the kidnaping of a local investment banker’s wife and the occupation of Wounded Knee in South Dakota, where he dodged way more bullets than he had during his time in the South Pacific during World War II – may have had something to do with his “unpacific” sleep habits.

In any event, while Ray was off searching for kidnap victims, chasing down bank robbers or hugging the dirt in South Dakota while bullets snapped over his head like so many angry bees, Reb was being cuddled and pampered, enjoying all the comforts of home and hearth with Dorrie.

A Clumber Spaniel-owning lady told me the story of how one of her dogs taught her and her husband to wait until the dog decided which piece of furniture was hers before they selected their spots. Failure to do so meant having a 60-pound dog plop down on their lap and block their view of either the television set or the newspaper they’d been reading.

Pushing the dog off didn’t work. She would just climb right back up, flop her 60 pounds down a bit more forcefully, and obstruct their view of the paper or the TV. Each time she was shoved off, she would return, and each time she did, the amount of impact associated with her return to the chair of her choice escalated. Since the dog made it clear she wasn’t about to cede her chosen spot, the Clumber owners finally were left with only two options: Banish the dog to the basement kennel or stand around like a pair of junior officers waiting for the general to take a seat. 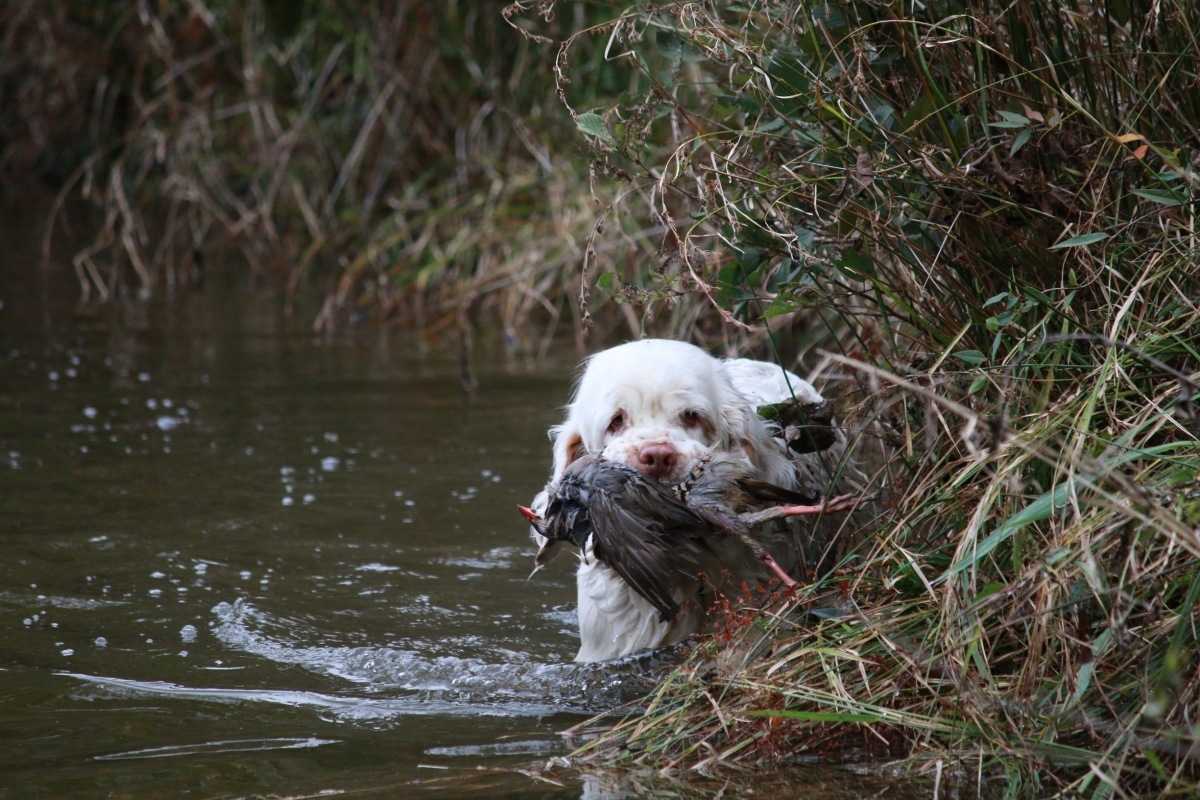 The Clumber’s owners now respectfully stand aside like a couple of properly deferential equerries, waiting for her imperial majesty to decree whether the sofa, the recliner or the chaise is her choice for the evening before they dare to sit down.

“It wouldn’t have been a good move to send her to the basement for a couple of reasons,” the Clumber owner said. “First, she’s an excellent sentry, warning us of any possible intruders on our property – the FedEx guy, the garbage men, squirrels, the neighbor’s cat, chipmunks. And second, when she’s confined to the kennel, she screams and howls so long, so mournfully and at such high decibel levels that once a passerby called the police, certain that someone or something was being tortured and quite likely murdered in our house. After having experienced wailing sirens, flashing lights and heavily armed people wearing body armor rushing our front door and having to explain, while handcuffed and scared silly, to some highly skeptical people standing in our home with weapons drawn that the noise was just our dog expressing her displeasure at being confined to the basement, we learned our lesson.

“So, now there we are every night, respectfully standing aside like a couple of properly deferential equerries waiting for her imperial majesty to decree whether the sofa, the recliner or the chaise is her choice for the evening before we dare to sit down ourselves.”

After reading these examples of how cleverly dogs train us, if there still exists any doubt as to who is the trainer and who’s the trainee in your own relationship with your dog, ask yourself one question: Is it you or the dog who picks up the yard after the dog has completed its potty chores? The answer will tell you exactly just who is the one who has been trained.

© Dog News. This article may not be reposted, reprinted, rewritten, excerpted or otherwise duplicated in any medium without the express written permission of the publisher.
Wed, 12/02/2020 - 9:53pm