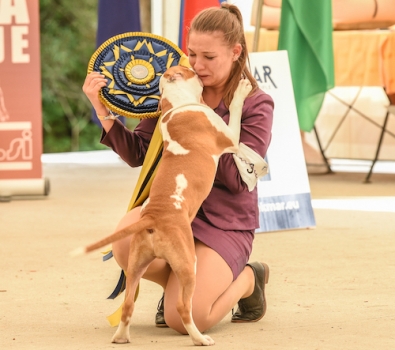 The Mecca for American Staffordshire Terrier enthusiasts
By
Masa Siroka

As I am writing this article, the whole Terrier world is preparing for the greatest Terrier weekend – Montgomery!

After last year’s cancellation, this year’s Montgomery weekend is going to be something exceptional – or, should I say, unforgettable. I first attended MCKC in 2006, and since then I have been trying to return to the biggest Terrier migration in Pennsylvania each year. No matter how often I visit Monty, I always have butterflies in my stomach when I take my first steps on the grounds of the Hatboro shows. There is no place in the world where you can see more than a thousand Terriers in one weekend.

I started this article with Montgomery weekend not just because it is that time of the year, but because being part of Amstaff Major evokes in me the same feelings that I have toward MCKC. I feel there is a parallel between these two events. 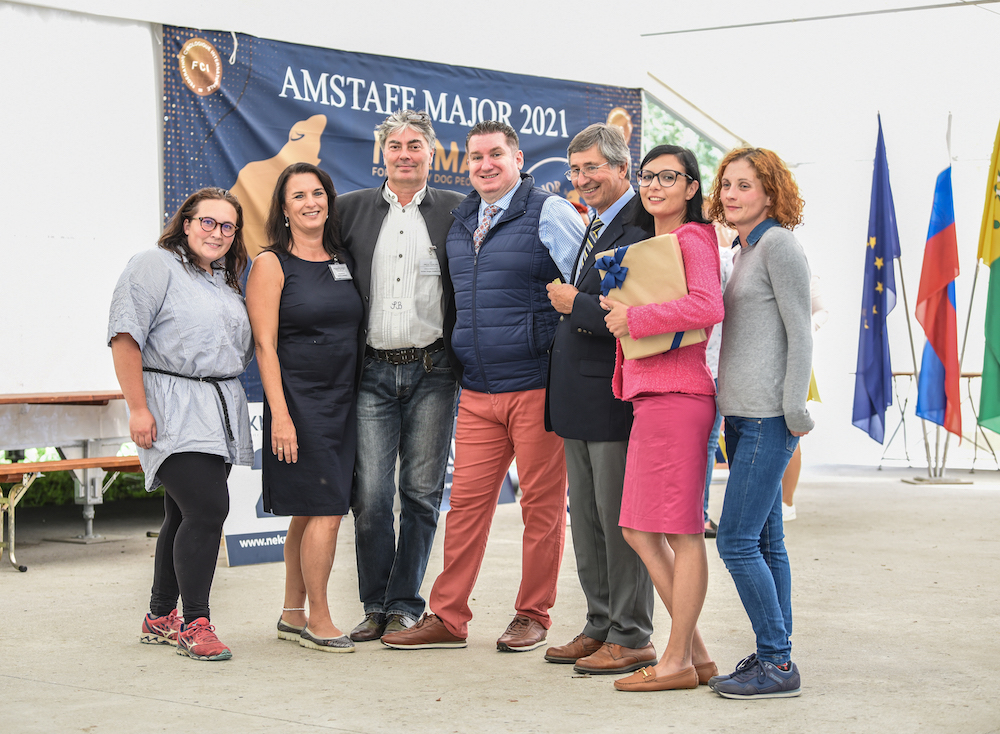 Despite logistical obstacles, the organizers and officials made Amstaff Major 2021 a success. Photo Simon Marka.

I joined the board of Amstaff Major 2021 more than a year before the show was held. I was immediately taken by the enthusiasm of Vladimir Mihaljcic, one of the founders of Amstaff Major, who share his whirlwind passion for American Staffordshire Terriers.

Amstaff Major’s creators are Vladimir, who is an international FCI/AKC judge, and his good friend and fellow AST breeder Mirko Popovic. They started this show in 2011 to meet the need for a notable and distinctive AST specialty on the European continent. Over the years, it has become the barometer of value and quality in AmStaffs – a gathering of American Staffordshire fanciers from all over the world. 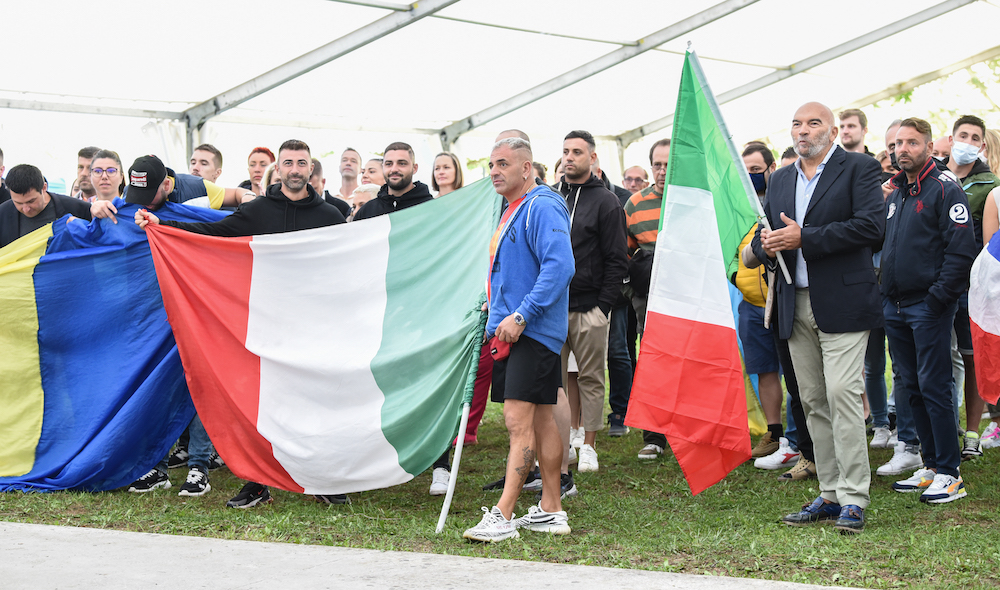 Since the first show, there has been great support from AmStaff fanciers from Europe and overseas, with many foreign visitors from countries such as Argentina, Mexico, the United States and Australia.

The show quickly became popular among AmStaff enthusiasts, and one of the reasons lies in the tangible atmosphere inside and outside the ring. Since 2011 the show has been organized in different countries, including Serbia, Croatia, Slovakia, Romania, Russia, Hungary and Spain, and this year was Slovenia’s turn. The location of the traveling show is based on inquiries from clubs interested in organizing it and willing to use the name Amstaff Major.

In 2016 and 2017, the show expanded to another continent with Amstaff Major Latinoamerica in Mexico. Usually the judging panels are a combination of the best Terrier judges from the U.S. and Europe.

Like any other great dog show, this is a tough one to win. In my humble opinion, for an AST fancier, winning at Amstaff Major is one of the most important wins of all. But you don’t attend Amstaff Major only because you hope to win there. You go to Amstaff Major to be seen, and of course to see what breeders, friends and your competition produced in the past year. Amstaff Major is the place where breeders show the results of their breeding programs, and where the “creme de la creme” of American Staffordshire Terriers are shown by their handlers, owners and breeders.

The Slovenian Terrier Club expressed interest in organizing Amstaff Major late in 2019, before COVID erupted, and we reached an agreement for 2021. 2020 was reserved for a jubilee show in the homeland of Amstaff Major, Serbia, but unfortunately, due to COVID the show was cancelled.

After a two-year break, the show was finally held on the first weekend of September 2021 in Polhov Gradec. This little town is settled in the natural splendor of the Gradaska valley, just a few kilometers from the capital of Ljubljana. The location offers a picturesque showground near a creek, which makes the place even more charming.

It was really challenging to organize such a high-profile dog show during the pandemic, when everything can change from one day to another. I cannot express all the feelings that went through my mind and body during the last days prior the show. The authorities sent regulations for the club to follow two weeks before, but we didn't get permission to conduct the show until the Thursday before, when mostly of the exhibitors were already on their way to Slovenia.

There was a significant amount of extra coordination to make this show possible because of Covid-19. Among with their entry confirmations, exhibitors received a two-page document with all the requirements for entering the country, the showgrounds and information about testing. We were also able to organize testing for people at the showgrounds on Saturday. Thank goodness everyone came prepared, and we didn't have to refuse anyone at the entrance.

I was so concerned about finding sponsors and donors during Covid, but it turns out I was persistent enough to get many of them to support our event. Our main sponsors were Nekmar Dog Food and a veterinary firm, Melisa Veterina. Nekmar helped not just with dog food as prizes but with graphic design and a huge poster for the photo corner, plus another for the show tent. The vet firm helped with many great products, but also with financing all the gorgeous framed prizes, handmade by artist Cristina Alexandrescu, and luxury ribbons for all four placements and main winners. Additionally, we had tremendous help from other donors: dog treats, wine, pet products and precious artwork. Many from the donators were from our Slovenian Terrier Club. When we ask for help at the show, some members volunteered to help. In addition, my local florist create a fantastic decoration that created a dramatic but elegant difference. My younger brother, who is a jeweler, made limited-edition silver pins with the Amstaff Major symbol as a present for the judges and the winner of the first Amstaff Major, Ch. Madeleine of Gold Court. 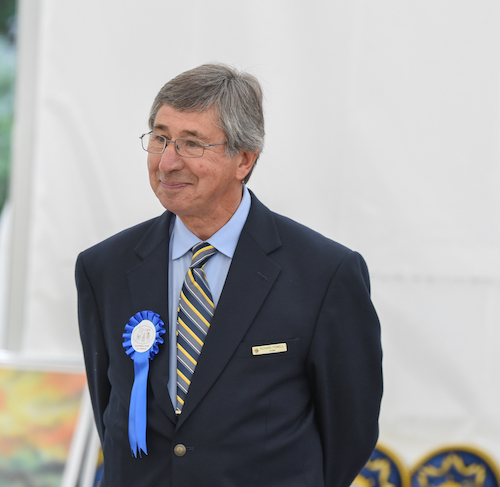 Unfortunately, our judge, Bob Busby, sustained a back injury and was advised by his doctor not to travel. He was incredibly sorry not to be able to fulfill his obligation to judge the 2021 Amstaff Major, and so were we. It was quite a project finding another judge from the U.S. on the weekend before the show. I think only God saved us when Richard Powell said that he could come. He arrived Friday before the show, after he almost lost his flight to Europe because of Hurricane Ida, which pummeled the East Coast the night before his flight. Again, I think God was there for us. 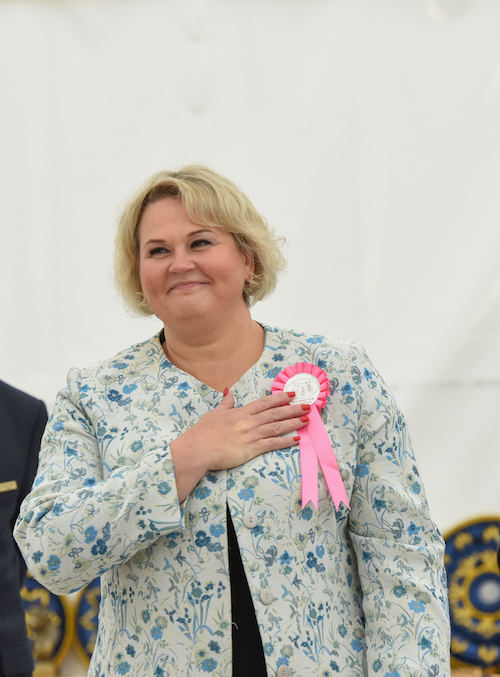 Our other judge was the world-renowned Mrs. Helen Tonkson, a bull-type Terrier expert and breeder from Estonia, who joined us on Friday.

We closed the entries the weekend before the show, and drew an entry of 215 AST: 102 males and 113 females. Males were assigned to Richard Powell and females to Helen Tonkson. We decided that a coin toss would determine who would choose the final winners and BOB. At Sunday’s all-Terrier specialty, we reached an entry of 107 AST, including 61 bitches (judged by Richard Powell) and 46 males (judged by Helen Tonkson). Richard Powell was in charge of BOB. Another 25 Terriers were entered; they were judged by Mrs. Melita Groselj. The Best in Show judge was Helen Tonkson. 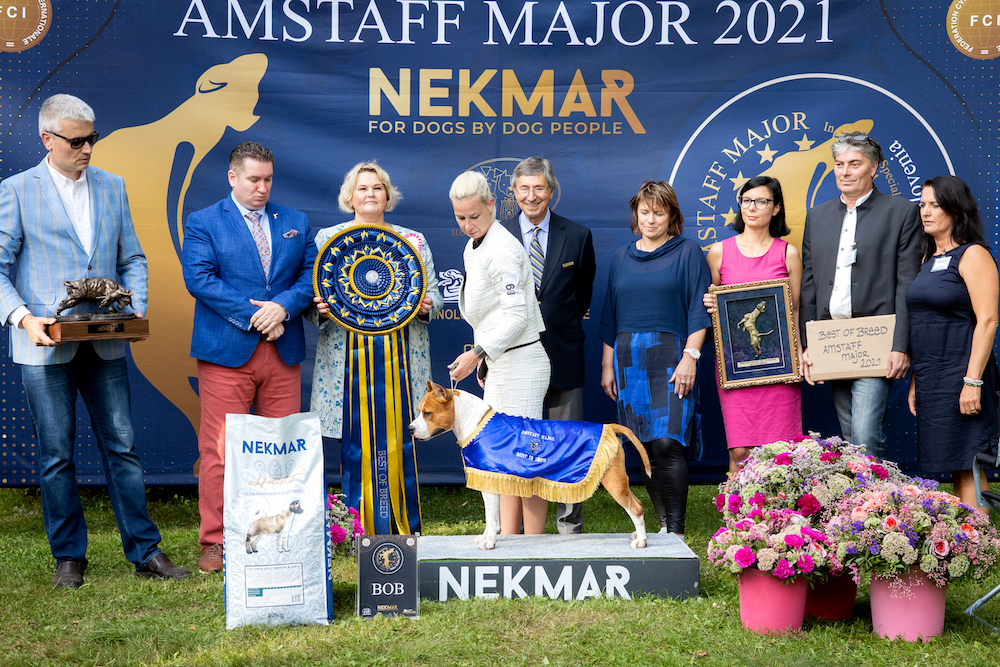 The weather during the whole weekend was heaven! Those in Polhov Gradec woke to crisp mornings, but were kissed by the sun both days. The elegant white tent was like a heavenly cloud in the valley. The inn located on the showgrounds prepared delicious food during the day, offering homemade food and barbecue.

When the time came to start the show, the organizing committee, the delegate from the kennel club, the judges and of course the mayor of Polhov Gradec were standing in the ring. We were surrounded by the beautifully displayed prizes and flags. The master of ceremonies started with introducing all involved, and the mayor welcomed us to the town of Polhov Gradec. Vladimir Mihaljcic took the microphone in hand and made a speech to thank those who made this year's event possible. The opening ceremony was followed by the presentation of the entered countries. A walk through the ring from the representatives of the 21 countries present holding their flags emphasized the purpose of gathering at this show. Then we started with the judging. 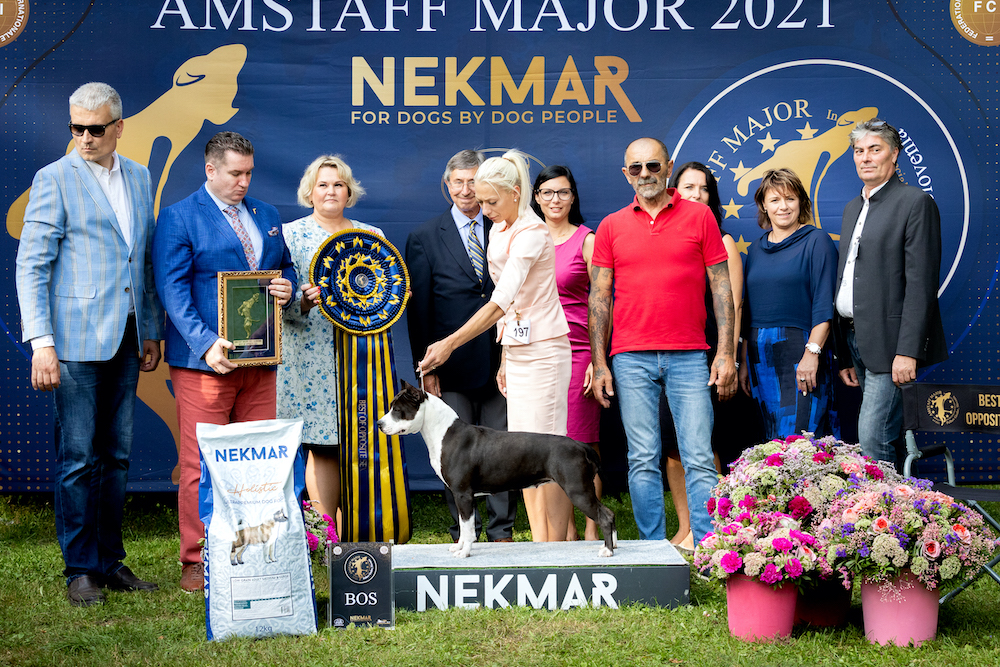 Two factors are very important in making the show’s atmosphere unforgettable: the DJ and the master of ceremonies. DJ Borut and MC Andrea are two irreplaceable people at almost all the dog shows held in Slovenia. They did a wonderful job, as always, especially when it came to a surprise moment ...

A dear friend of Vladimir and I contacted us a couple of months before the show, asking if we would let him propose to his girlfriend at Amstaff Major. Of course, we were both in, and so the preparations began. The couple in question, Ben and Mireille, were spending their summer holidays traveling in a motorhome from Holland to Croatia, showing their dogs along the way. We met at a show in July, where I secretly introduced Ben to our DJ Borut and MC Andrea. They hatched a plan: Before the judges flipped the coin to choose the BOB judge, MC Andrea found an excuse to call Ben and Mireille into the ring, and the DJ started with a Dutch song chosen by Ben ... You could see by her face that Mireille had no idea what was going to happen. Ben made such a touching speech before the proposal. She said yes! Lots of us were unselfconsciously wiping our eyes. 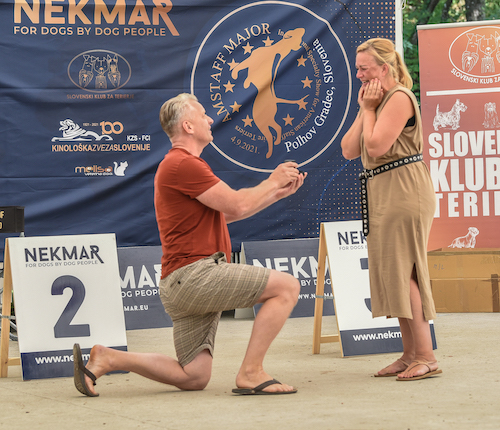 After the engagement came time for the culmination of the day: The judges flipped the coin. This is a pivotal moment because the greatest honors and awards are decided by the winner of the coin toss. As the coin rotated in the air, everyone’s nerves were on edge … 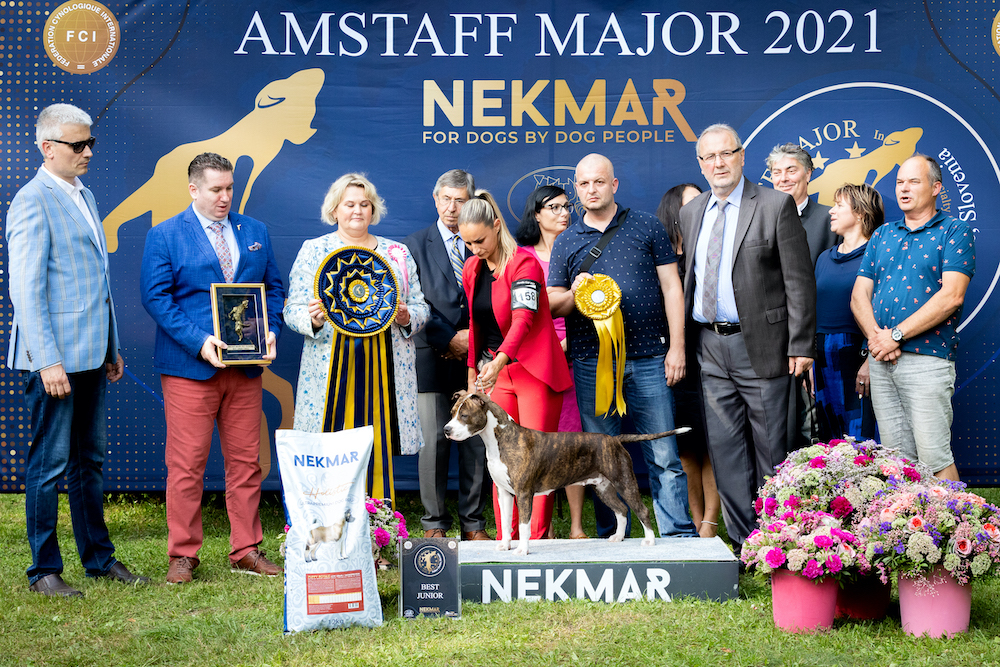 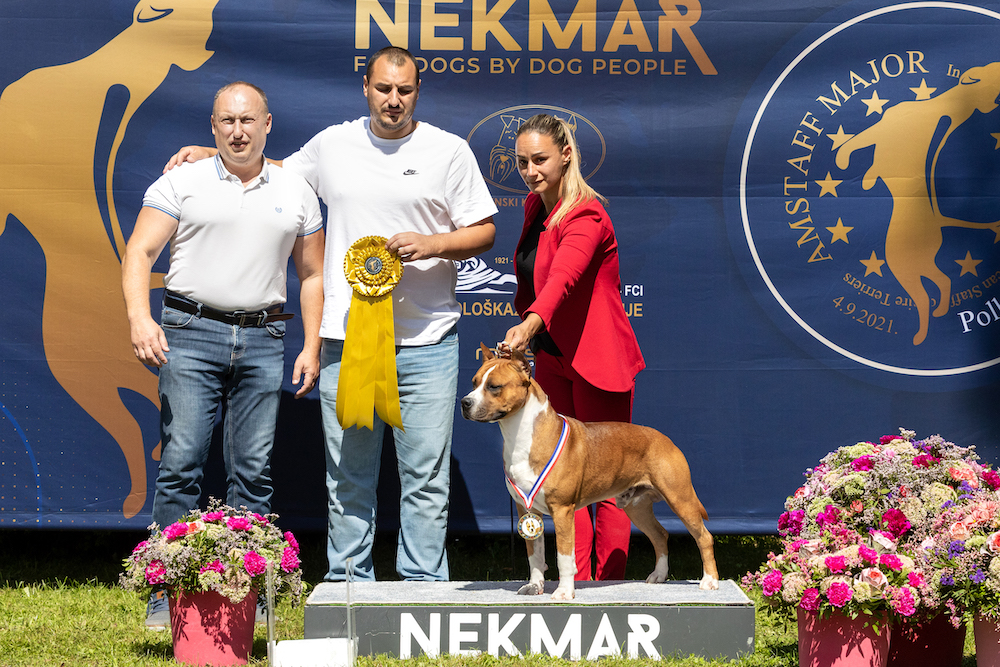 At the end of the day, there was a very enjoyable competition called the Best Country Competition, which consists of choosing the best three groups of dogs from the countries present. Both judges were charged with choosing the first three winning countries.

Groups of three to five dogs were formed on the day of the show, based on the country where they were bred: Each country selected their group. Again, Vladimir took to the microphone, encouraging fans to cheer for their countries. Flags were again flying high, and the ring was full of emotion. The winners were: 1. Hungary, 2. Serbia and 3. Russia. 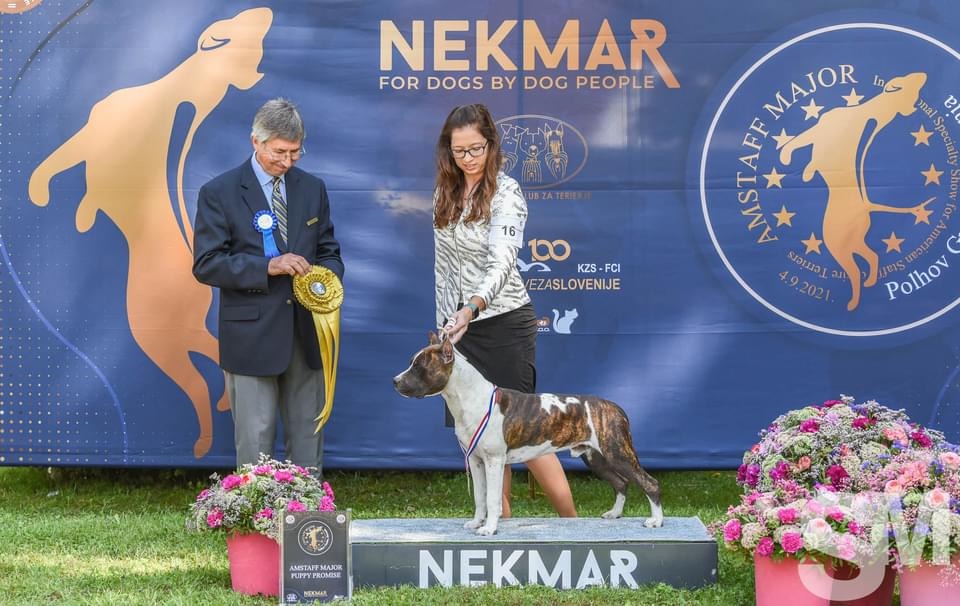 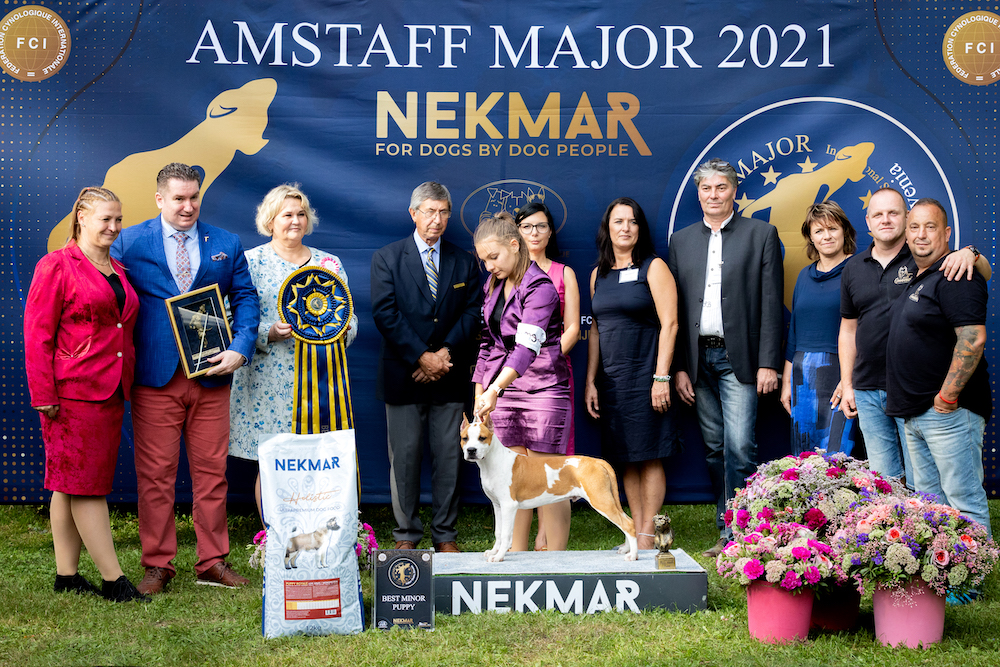 During judging I could feel the intensity and the excitement in the air. I think I was able to hear the beating of people’s hearts. Everyone’s nerves and excitement were at the maximum. If you get a class placement at Amstaff Major, you have achieved a great honor, and if you get to the finals in Best of Breed, you have achieved possibly the greatest of all! But I believe winning the highest titles and BOB is indescribable. The anticipation of the outcome is a feeling that leaves everyone on the edge of their seats. In the end there were tears of joy, love and passion for this beautiful breed.

This one-of-a-kind event has become a worldwide Mecca for people who love, breed, show, and own American Staffordshire Terriers.

© Dog News. This article may not be reposted, reprinted, rewritten, excerpted or otherwise duplicated in any medium without the express written permission of the publisher.
Sat, 10/09/2021 - 10:03pm