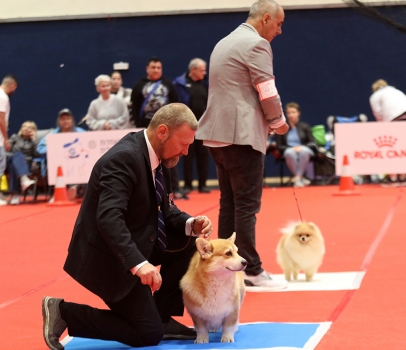 For the past 15 years or so, the Israeli Kennel Club has held the Champion of Champions competition as its final event of the year. As its name suggests, the competition is open to local champions who compete for the Top Dog title. All the dogs are initially judged individually by three judges, who give them a numeric score. The judges’ scores are then added up and the top 16 dogs ascend to the final stage. 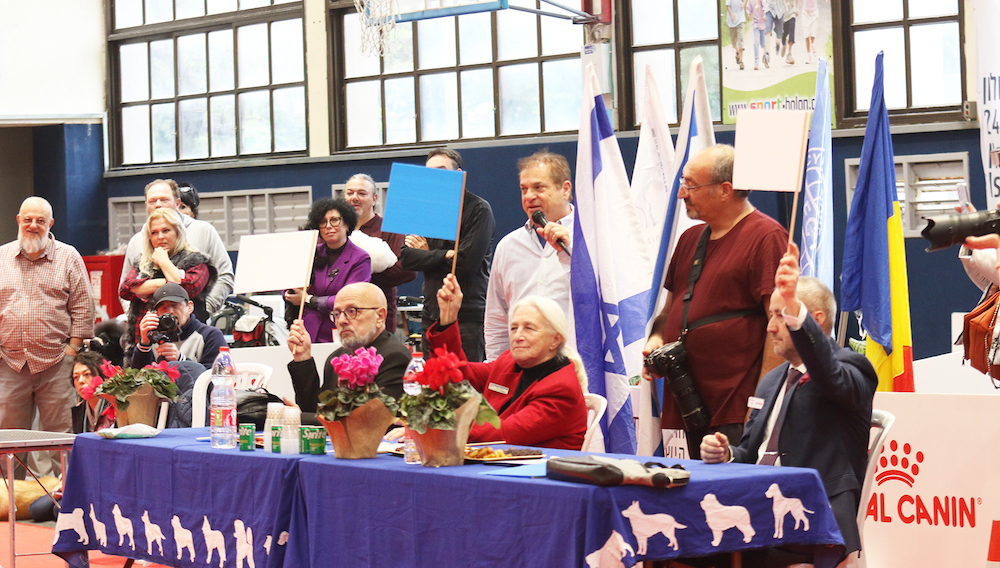 At this knockout stage, the dogs enter the ring in randomly selected pairs. One is placed on a blue rectangle and the other on a white one. They are put through their paces and then the judges raise one of two flags – blue or white. The dog that gets the most votes continues to the next round. When the four leading dogs are determined, the judges go over them once more and then decide on the placings.

This year’s event had an entry of 97, but for undetermined reasons 17 didn’t show up. The remaining 80 took part in the competition. There were representatives of 57 different breeds; the largest entry was Boston Terrier followed by Shih Tzu, Akita Inu, American Akita and Shiba Inu. However, none of these made it to the final 16. Same goes for the Pomeranian, a breed that has been on the top of the list for the past few years. 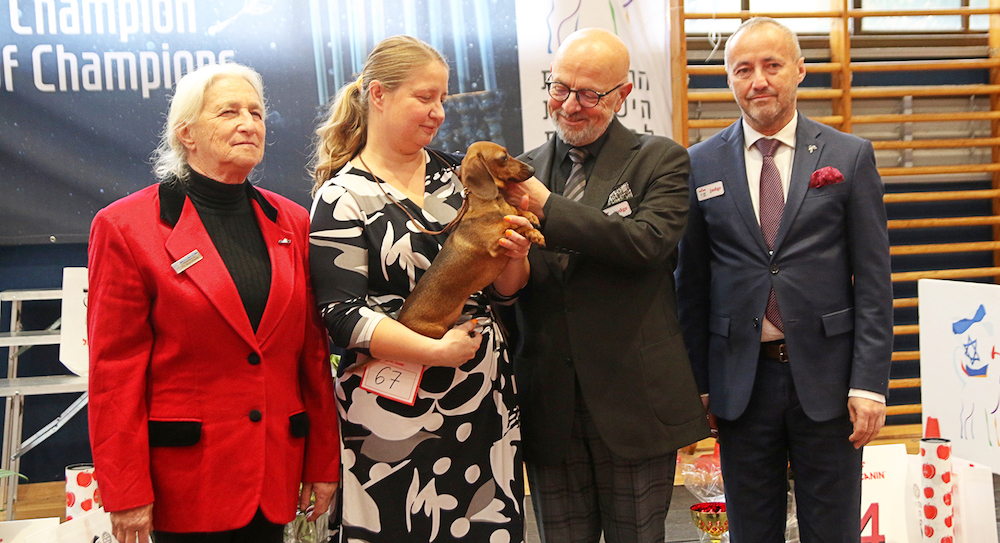 “This year he was very successful,” said Helen Braiman about her winner. “Anatomically, he is very well constructed. He has excellent bone and angulation, leading to very good movement. He is three and has now reached his peak. He was at home during Covid, and it took time to get him used to traveling. This year I showed him in Hungary, Austria and Switzerland. He has three out of four requirements for the Alpen championship. He has won 12 CACIBs this year, finishing his international title, and has won groups twice in Switzerland and RBIS both there and in Hungary. He has done BOB at all the shows. He is this year’s top-winning terrier in Israel.

“When I entered him for the competition, I thought he had the quality to win,” Helen explained. “He senses me when I handle him and shows his love for me. He did a very good job. I respect him and don’t want him to be a robot.

“He is ninth generation from my breeding. His sire is from my breeding, Scottish Impress Scorpion, and his dam, Multi-Ch. McVan’s Come Away With Me is from the States, bred by Vandra Huber." 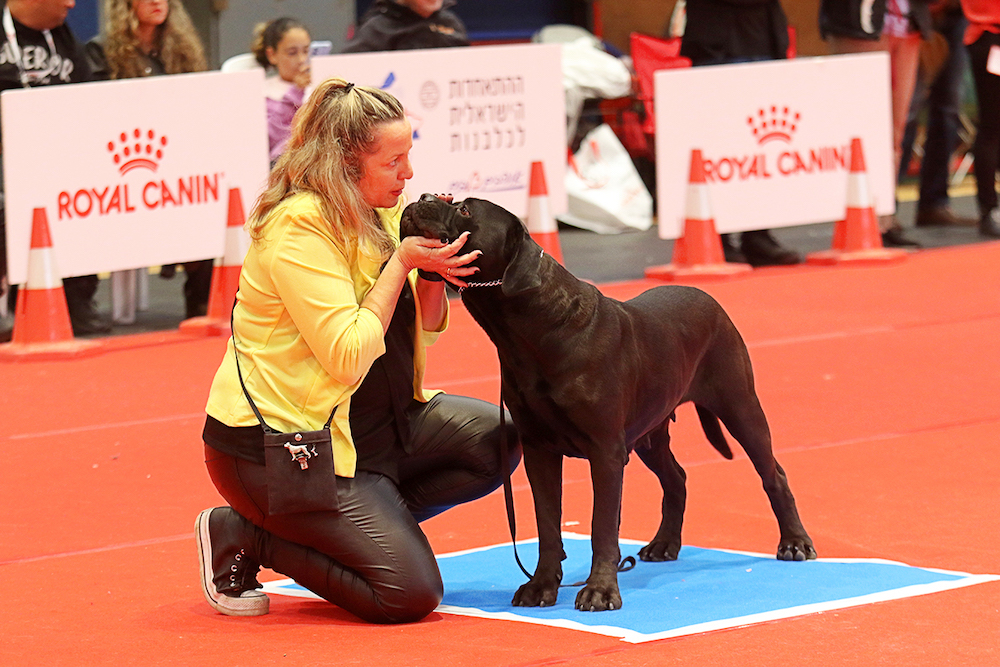 Dr. Lazar Gerassi is a renowned breeder of Cane Corso. Dorit Dembin, an experienced handler, is his partner. The bitch that won second place in the competition is from his breeding. She has had several achievements, the latest being BOS at the ENCI Winner Show in Italy.

The third-place Keeshond belongs to Natalya Kuzmina, who imported him from a Russian kennel, Almazniy Istochnik. “Balu” is now two years old, an Israeli champion, and has been put to stud with very promising results. As of now, Natalya hasn’t shown him outside Israel, but she has entered him in the 2023 European Dog Show, due to take place in Denmark.

“Wow! Absolutely fantastic day!” wrote Svetlana Lukovkina, owner of the fourth-place Dachshund. “Our little princess Asti – Multi BIS KS Line of Life Asti Martini – presented us with an amazing result for the end of the year. At the Israeli Champion of Champions Show 2022, at the tender age of one year and five months, she is not only the best Rabbit Dachshund of the year, but also Best in Show IV!”

Svetlana’s husband, Dan Simkin, continued: “She comes from a Russian kennel in St. Petersburg named Line of Life owned by Lila Ignatova. We eagerly awaited this particular litter since her sire is from a famous kennel in South Korea and her dam’s bloodlines come from the famous Canadian kennel Grand Gables.

“Due to the war between Russia and Ukraine, restrictions on flights from Russia and people who try to make a profit without caring for animals, her trip to Israel took almost two weeks, and she arrived starved, dehydrated and weak. She required veterinary treatment to recuperate physically and a lot of warmth and love to rehabilitate emotionally. Had we known in advance what she would have to undergo to reach us, we would not have brought her to Israel.

“We haven’t shown her in other countries as of now and hope to enter her for foreign shows soon,” Dan noted. “Since she gained back her strength, we have showed her in Israel. She has a junior championship title and is on the way to finishing the adult title. She is the top-winning miniature Dachshund in Israel in 2022. She has already won several BOB and even BIS in club specialty shows as well as group wins in international shows.

“We like taking part in the Champion of Champions competition to present the breeds that we breed and our own dogs. Whenever we enter a dog for a show, we believe we can win, since without belief and hard work it’s impossible to gain any achievements. However, we are happy for other winners. We were delighted when Asti won fourth place in the Champions competition. She is a young, very beautiful bitch with an engaging temperament and she definitely deserves her wins.”

“I decided to enter him for the Champion competition spontaneously,” Yanina said. “Zorro is the top-winning Yorkie this year so I decided it would make a nice finish to this successful year, particularly since he is at the peak of his career. He now has championship titles from Lithuania, Latvia, Estonia, Baltic, Belarus, Israel and Cyprus. I imported him from Rasa Bendronaityte in Lithuania, the country in which I was born and from which I immigrated to Israel in 1992. He has offspring abroad that have gained titles in various European countries. I hope he will enrich the genetic pool in Israel and give us some offspring that are as beautiful as he is. 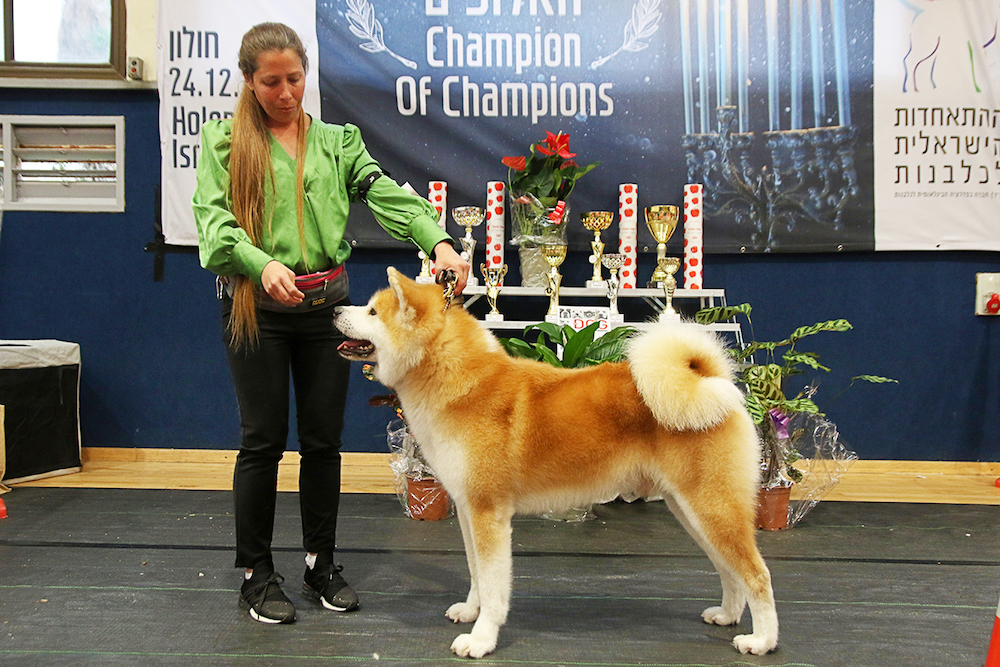 ita, a Japanese import, Ch. Tamaarashi Go Taishdou. “He has the bloodlines of my late Maro, who died in Slovenia. He is an Israeli junior and adult champion. He took part in the European Dog Show and the traditional Akiho show in Italy in which he attained the very respectable second place. He went Best of Breed several times in club shows in Israel and was even Best in Show despite his young age. In total, a lovely dog with a crazy owner.”

Myrna Shyboleth, an Israeli all-round judge, described her experience. “I had the honor to be one of the judges for the annual Dog of the Year show of the Israeli Kennel Club. The event was held on December 24 in a lovely venue, a recreational center, that was beautifully prepared and decorated, definitely on the level of an international event abroad. There were 97 champions from a large variety of breeds entered, judged by three judges.

“The event was very well organized, and everything flowed smoothly and efficiently. It was a real pleasure to see and judge so many outstanding dogs. I was quite thrilled at the high level of the competition.

“The final winner and Israel’s Dog of the Year was a Scottish Terrier, a really outstanding dog that showed his heart out.

“The atmosphere was lovely and the audience was very supportive. I really enjoyed being part of this event,” Myrna concluded.

© Dog News. This article may not be reposted, reprinted, rewritten, excerpted or otherwise duplicated in any medium without the express written permission of the publisher.
Thu, 01/19/2023 - 8:58am