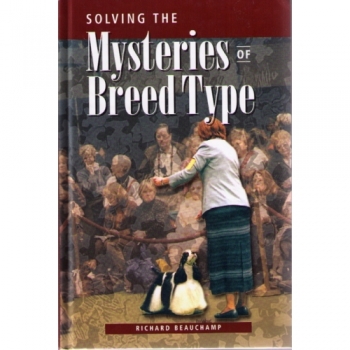 Shortly after its publication in 2002, I wrote a review of the late Rick Beauchamp’s “Solving the Mysteries of Breed Type.” Six years later, Beauchamp completed a second edition, and it is not to be missed.

Most immediately apparent are the physical difference between the two books: The later edition is larger, as are the photos, which are all in color, a real enhancement. Additionally, the paper is glossy.

Even if you have Beauchamp’s first book, the second edition is well worth the investment. Sort of a crash course in the evaluation of dogs, it should be in everyone’s library. Beauchamp’s methodology gives you the tools to get beyond “So-n-So told me” and the “I like … ” phenomena so popular today.

Both books can be readily found on Amazon and other online books sites.

Rick Beauchamp was breeder, exhibitor, judge and author who contributed monthly columns to national and international dog publications. He himself would admit to being controversial.

Of course, much of the information is the same in both books. New to the second edition, however, is Beauchamp’s Honor Roll of Excellence, a collection of color photos of beautiful dogs of various breeds – all exuding breed type for their specific breed. Capturing moments in history and preserving them for future students of dogs, the photos define breed type, but also demonstrate the ingenuity and breed-specific knowledge of the breeders, handlers and photographers of the time.

Beauchamp shares these fabulous photos to support his philosophy for demystifying breed type, helping to enhance understanding the greats and allowing others to establish a mind set on type in those breeds and others.

In the book, Beauchamp outlines five elements of breed type: character, silhouette, head, coat and movement. The common denominator in the breeds featured in the Honor Roll is that they all appear to answer to their standards. They seem to have all the necessary traits blended in such a way as to fulfill their breed’s purpose.

The dogs in this Honor Roll of Excellence are not merely dogs of the past, nor does Beauchamp suggest that the great dogs of the past surpass those of the present or future. Instead, in his Honor Roll are dogs that have the most of the best traits arranged most appropriately and functionally for their breeds.

If you, like me, wish to see and reminisce about the top dogs, breeders, handlers and photographers of the 1980s, ’90’s and beyond, look no further than “Solving the Mysteries of Breed Type.” As Beauchamp takes you through deciding his own future – would it be Hollywood or dogs? – he personally demonstrates that some of us fall into this sport unexpectedly. It’s not hard to guess which he chose.

Chapters such as “Defining the Term,” “Eliminating Confusion” and “Common Denominators” all contribute to your understanding and evaluation of dogs. At the end of each chapter, there is homework –exercises to reinforce your learning.

Though Beauchamp is not a proponent of the Popular Mechanics approach to evaluating dogs – that is, a part-by-part analysis – his “Graphing Technique” chapter is amazing. In this final chapter after discussing the five elements of breed type, he guides the reader through a practical approach to determining proper proportions in a breed. The reader orders two or three foils (transparencies) from the local copy center. This will eventually help you develop your eye for your own breed and those breeds you are studying.

Since the first step in evaluating an animal is recognizing the proper silhouette, one can use these foils on the photos galore in dog publications like this one. Merely superimpose the graph-paper transparency on the photo, and count the squares from withers to set-on of tail, and again from withers to ground – not for the purpose of comparing the numbers but for the purpose of setting your eye on how the measurements stand in proportion to one another, depicting graphically proper proportion.

With practice, one becomes accustomed to noting quickly whether a photo or an actual dog has close to proper proportions. With the graphing technique, one may also get into the details of head or any feature.

Beauchamp proclaims that the best way to understand a good head is to see a good one. This goes for the proper front, as well as for most features of a breed, for that matter. Yet today that is not so easily accomplished.

Why is it so difficult today? First, too many of the dogs being shown today are very common animals, and much breed “mentoring” goes on at the all-breed level. So prospective judges are observing and learning on mediocre dogs. Many good breeders are only showing at specialties, which are not advertised or featured in the media as the all-breed shows are. Judges often say that after a day’s adjudicating at a show of 1,000-plus entries, they have seen only one dog – or no dog – that inspired them! On social media, prospective judges will ask for anyone to mentor them at a show they might be attending.

In addition, we have many instant experts. Twelve years of involvement does not an expert make – expert enough to instruct others. I realize that need to check off the boxes looms, and we just want to get it over with.

Finally, another benefit from reading Beauchamp’s book: While history in many breeds is being lost, this second edition has photos and details of the dogs, breeders, handlers and photographers of the past, many of whom are still involved today. Invaluable knowledge, to say the least.

© Dog News. This article may not be reposted, reprinted, rewritten, excerpted or otherwise duplicated in any medium without the express written permission of the publisher
Wed, 04/07/2021 - 4:01pm