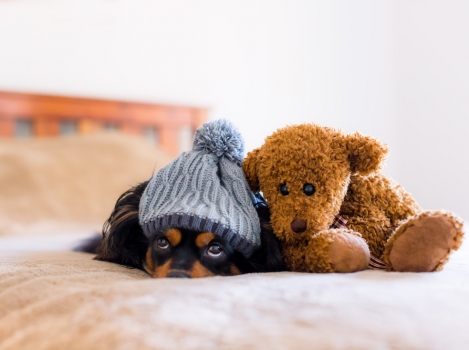 Why can't the AKC manage to create any consistency in branding and marketing?
By
Margaret Poindexter

I remember walking into the Javits Center years ago, and seeing boxes everywhere.

Big boxes, stamped “MADE IN CHINA,” stacked all around and needing to be unpacked.

“Lord have mercy,” I thought, “those poor booth girls.”

“What in the world is all that stuff?” I asked.

They were little, cheap, stuffed bears — they came in three colors, as I recall — wearing T-shirts with the equally ugly Meet the Breeds “logo” on them. They looked like something you would win at the fair for accomplishing the least number of winning ring tosses or dart throws.

Why in the world would the Great American Kennel Club be stocking its booth, for an event showcasing breeds of dogs, with BEARS?

As it turned out, I should have been satisfied with the bears because the next year it got worse: the “dog” balloons.

Mylar, semi-inflated, so that they floated along, “walking” on the curling ribbon that was attached like a leash. They looked like ugly anime — a badly hand-drawn graphic, post-apocalyptic, dog-ish cartoon. Offered for sale as a memento of an event intended to introduce the public to actual dogs, particularly those breeds that it does not get to see on a regular basis.

Fast-forward to present day — AKC now has the Museum of the Dog back under its own roof. The perfect launching pad for messaging revolving around the history of our relationship with dogs, the development and purpose of breeds, and last but not least, art — glorious, rare and unprecedented in size and scale dog art, depicting all of that and more.

And yet, for starters, it promotes itself with an ugly logo. A museum that’s home to some of the most well-known works of dog art in the world sports a logo with a silhouette of something faintly recognizable as a “dog.” A “dog” that looks like he might belong to Megatron. A “dog” version of a Pez dispenser or those “dunking birds” that tip over and appear to drink from a cup. A “dog” that looks like the boring cousin of the sad “SpongeBob Dog” logo that used to adorn AKC Canine Partners materials.

Why use something dog-ish? Why not something elegant, classic, dare we ask — real?

Dig deeper, into the commemorative items in the gift store, and it’s more of the same. Dog News inquired of the organization about their offering “Doodle” stuffed dogs and ornaments, and that debacle was blamed on some poor soul who apparently doesn’t have a name, went completely unsupervised, ordered “Doodles” because she was told to stock merchandise that was hypoallergenic, and left before telling anyone that she had placed them into inventory on the same website with all the other inventory. Alas, the remainder they were still selling when they were busted were yanked from the website and presumably given away to poor children in Armenia, and written off as a deduction.

Now, the latest treasure you can acquire are the “Dog Breed Building Block Kits,” a Lego-type building block set with which you can create your preferred breed of dog.  Just what we always wanted — and apparently many of you do because most breeds are sold out currently — the ability to build your own plastic dog that it sort of resembles a breed but not really, but, hey, close enough.

They remind me of the popular “Cuddle This” flyer that AKC Government Relations created several years ago and that apparently the marketing folks have never seen. It featured a picture of a robotic dog, with the poignant message, “If we spay and neuter every dog and shut down all U.S. dog breeders, where will we get the next generation of responsibly-bred pets? Preserve your rights to own and enjoy your best friend.”

No robotic dogs are available in the Museum of the Dog store currently, but keep checking back.

© Dog News. This article may not be reposted, reprinted, rewritten, excerpted or otherwise duplicated in any medium without the express written permission of the publisher.
Thu, 01/21/2021 - 4:58pm