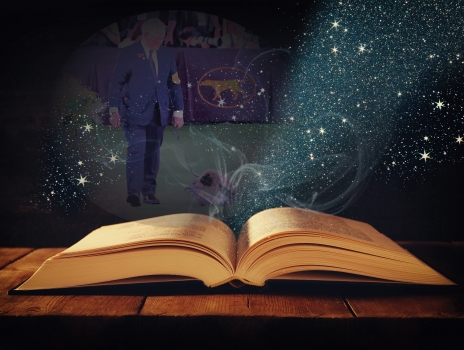 Does the Shoe Fit Now?

Perhaps one of the hardest things about growing up is realizing that fairy tales don’t come true.

Frogs do not become princes.

Woodland creatures do not do housework.

And perhaps most distressing to me: Mice do not turn into horses.

When I went to work at the AKC, I held the belief in my head that it was a magical place, where dogs romped and played, while happy dog people whistled while they worked. I imagined days filled with talking about dogs, learning about dogs and helping dogs.  And I dreamed about all that reverence and passion and focus culminating with the High Holy Days for Dog People: Westminster.

How great it must be to work for the American Kennel Club all the time, but most especially, during Westminster, I surmised.

Why, Westminster must be an official office holiday, I figured.

All employees are probably given passes and encouraged to attend, and to immerse themselves in the greatest tradition of our sport, I expected.

Instead, I was like Cinderella, left behind, wearing sack cloth and ashes, scrubbing the floors.

Oh, sure, I got to go. At night. After working all day. And I got to sit in the designated “lawyer section,” with outside counsel who were given complimentary tickets. After a week beforehand, enduring a board meeting, the late-night marathon called the “Theater Benefit” (again, at the “lawyer table”), an office open house, a brunch, and a handful of other obligatory events and tasks.

In other words, after working a week in New York before the show even happened, I was too exhausted to enjoy the groups at night. And spending the day actually watching breed judging and getting the opportunity to put hands on dogs in the benching area was not only discouraged, it was frowned upon. What, don’t you have work to do? How do you possibly have time to simply hang out at the show?

But then Westminster happened this year.

Westminster, emerging from the pandemic, adapting and persevering, to keep its tradition alive.

Westminster, not in the confines of the Piers and MSG, but on the grounds of a castle.

Westminster, not dodging or dealing with a blizzard, but outside, in perfect June weather.

Like every good fairy tale, there was the beautiful princess. She was showing the lovely daughter of her handsome Best in Show-winning prince, who was taken from her way too early.

Like every good fairy tale, there was a lovely queen who had ruled over the land, and had recently given birth to offspring to carry on her legacy.

Like every good fairy tale, there was a handsome prince, with soulful eyes and a regal disposition, who sought to lay claim to his grandfather’s throne.

But as is typical of most good fairytales, the scene stealer was the fairy godmother. She is the person who often imparts wisdom – indeed, the moral of the story. The woman who points the wand or, in this case, the Best in Show rosette, and changes the outcome of the story, making dreams come true.

When retired teacher Pat Trotter stood at center ring, and asked, “Can I say what I am going to say before I give my reserve?” you knew what was coming was going to be a life lesson. You knew she was going to say what those in the fancy have been waiting for someone to say publicly on their behalf. You knew she was going to change the trajectory of the entire story, and share, like Glinda the Good Witch told Dorothy, how we have always had the power to get back home.

“We love all dogs as dog lovers. Mixed breeds and purebreds; they’re all pets. Every pet may not be a show dog. Be assured, every show dog is a pet.”

And then, with a wave of her wand, erm, ribbon, she transformed the little dog with the lion’s heart into Westminster’s Best in Show dog.

And she restored my faith in the magic that is Westminster.

© Dog News. This article may not be reposted, reprinted, rewritten, excerpted or otherwise duplicated in any medium without the express written permission of the publisher.
Sat, 06/26/2021 - 3:18pm