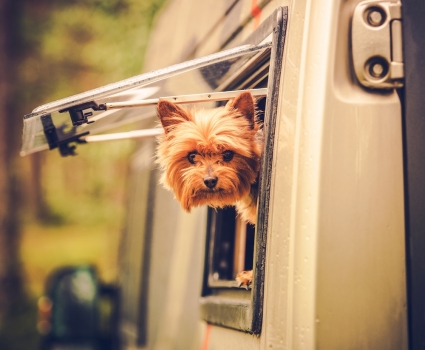 Race you to the next available RV spot
By
Margaret Poindexter

“What is this RV situation I’m hearing about in Raleigh? NO power available?”

Apparently word had filtered down to this handler en route to the Raleigh shows that the traditional RV parking area had been utilized for another activity, putting parking, especially with hookups, at a premium.

Comments revealed that a combination of a DINOSAUR exhibit, together with a CHEERLEADING competition also taking place at the Fairgrounds, had limited available spots, particularly in proximity to the building.

As this drama played out in real time, I felt the anxiety.

But it also occurred to me that this whole situation presented an opportunity.

When clubs are struggling to restart shows in a COVID-19 environment, and indeed, many are fighting for their very survival because of cancellation of events, maybe it’s time for clubs to get creative with those special attractions.

When the going gets tough, an RV-Dinosaur-Cheerleader grudge match might be just the ticket.

Alas, the whole situation failed to play out as I hoped, and the handler eventually shared, “So, after all that … I’m in Raleigh and parked where I always park!”

I was relieved for my friend, because Lord knows, the last thing handlers need, with a full truck, facing almost a week of shows, juggling ring conflicts, layered with the necessity of COVID compliance, is to have to, upon arrival at the show, race a fellow handler to the last available spot for her rig. On the other hand, clubs, faced with dwindling show-site options, state-mandated COVID restrictions, aging membership and limited volunteers, probably see an invasion of dinosaurs and cheerleaders as the least of their worries.

Meanwhile, the AKC, positioned to actually bring some relief to the situation, sits on Park Avenue, reporting $13.5 million in net operating income for 2020, and crossing its legs. I laugh as I read the Minutes characterizing certain inane regulatory changes as “Assisting the Sports,” when two pages later, those same Minutes report the dissolution of clubs.

AKC attributes its financial position to the strength of registrations in 2020. The February Minutes reported that dog registrations were 26% better than budget, and litter registrations were 19% better than budget. (Or 18% and 10%, respectively, depending on which section of the Minutes you read. Transparency? That’s for amateurs.) That resulted in an almost $9 million increase in net operating income over 2019. In a pandemic. At the same time that the AKC reports events in 2020 were down by 10,000.

Look around you. How many organizations and individuals do you know that can report that kind of financial resiliency, much less financial gain, during the past year? Certainly not restaurants. Certainly not hotels. Certainly not the folks who have been laid off, including many 20-plus-year employees of the AKC.

The kind of “assistance” that’s needed right now is financial: help replace income the clubs have lost; give them grants to hold alternative events, even virtual, until shows can return; hire back employees who have been laid off instead of breaking the backs of those still employed.

You can call it “The American Kennel Club Rescue Plan.”

Unfortunately, folks, that’s unlikely. For one thing, the delegates just elected the Board of Directors Class of Same Old Same Old. Whatever the Executive Suite wants, apparently it gets. And they don’t even have to serve them lunch to get it anymore.

So back to those “special attractions”… I really think RV races to the last available spot has possibilities. I would tune in to pay-per-view to watch.

It just occurred to me AKC will claim the rights to that content, too.

© Dog News. This article may not be reposted, reprinted, rewritten, excerpted or otherwise duplicated in any medium without the express written permission of the publisher.
Mon, 03/22/2021 - 9:47pm