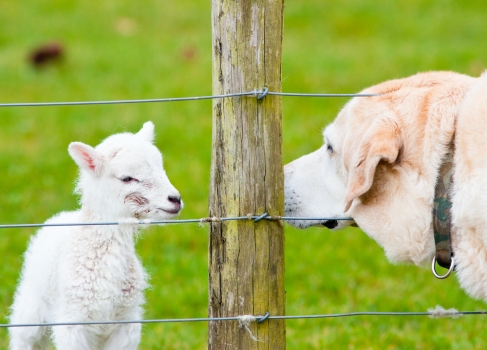 Silence of the Lambs

Sometime during the first week in January, the familiar email from Matt would arrive.

He would ask me to commence the process of drafting the questionnaire to be sent to the candidates for the AKC Board of Directors. The Q&A appeared annually in the Westminster edition of Dog News, and was a much-anticipated feature. It represented the opportunity for members of the fancy who were not Delegates to hear directly from potential Board candidates about their positions on various issues and challenges facing the organization and the sport.

As you may recall, that year, for the first time in the long history of the Dog News Questionnaire, current Board Chair Tom Davies emailed me to announce that he and the other four candidates running were declining to answer the questions.

I won’t rehash what transpired or what was said. I wrote about it at the time in a column called “Hiding in Plain Sight.” And I can’t share Matt’s comments at the time because we are a family publication.

But that incident marked the end of the Dog News Questionnaire.  And unbeknown to us at the time, it actually marked the beginning of the end of meaningful AKC Board elections.

The next year, an amendment purportedly proposed by the Beaumont Kennel Club, “put forward by staff” and approved by the AKC Board, was approved by the Delegates at their December 2020 meeting.  The amendment changed Article VIII, Section 7 of the AKC’s Charter & Bylaws, and was characterized at the time as intended to “eliminate costly balloting for unopposed Board candidates during the annual election. It would also save the time that it normally takes during the Annual meeting to conduct such elections.”

What the amendment actually did was strip the Delegates of any meaningful opportunity to elect Board members going forward. Instead, under the new provision, when the slate of candidates put forward by the Nominating Committee — which is appointed by the Board — is unchallenged by any other candidates who step up to run by petition, that slate is deemed “elected” without the necessity of holding a “costly” election at the annual meeting.

You need only look as far as this year’s Board Candidate class to see this playing out in real time.  Three seats, three candidates put forward by the Nominating Committee, all three are current Board members.

But wait, you say? Can’t someone still decide to run from the floor and get sufficient signatures on their petition to support their candidacy?

Please tell me whom you think is going to stick out his or her neck to try and run against the Board’s anointed, cause there to be a costly and time-consuming election, and risk becoming persona non grata among the already cliquey and closed operating apparatus of the AKC?

Hate to say it, Delegates, but they pulled the wool over your eyes on that one.

You better get comfy with this Board, and with all that they are doing (off the record, in executive session, by the way) because they have wrestled away the single biggest piece of leverage that you had over them — your vote.

If you’re not, then the only way to change things is to try and push for reconsideration or a vote on restoration of the old language in the Bylaws. But as we have seen in the past, getting the Delegates to vote to reverse something they have already done, regardless of how misguided (think “term limits”), is nearly impossible.

The other option — and it’s too late for this Board election — is for a group of like-minded delegates to bring forward, through petition, a full slate of candidates to run against the Board’s chosen slate. No one as a part of this alternative slate could submit their name to the Nominating Committee process and risk having the full slate split. Instead, the alternative slate would need to put forward its candidacy after the Nominating Committee has announced its nominees. The slate of candidates would then need to come forward together, obtain the necessary signatures, and run as a united, alternative group of Board candidates, bringing with them the promise of change to the current Board and the current way of doing business.

You’ve got a year to formulate a platform, draft candidates, and generate grassroots support for your movement.

And you have my pledge that a questionnaire will be forthcoming, and your answers will be published.

© Dog News. This article may not be reposted, reprinted, rewritten, excerpted or otherwise duplicated in any medium without the express written permission of the publisher.
Tue, 01/11/2022 - 3:30pm