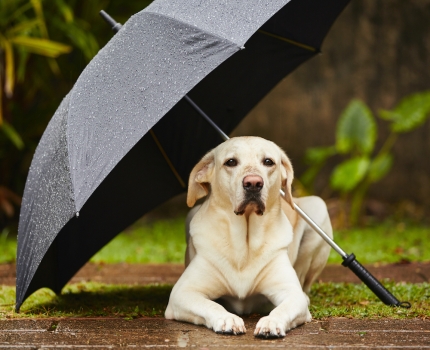 Storm warnings for the American Kennel Club
By
Margaret Poindexter

As the remnants of Hurricane Ida moved from the Gulf Coast up into the Northeast, flood warnings were issued to residents. Despite that, many folks were caught off guard by the magnitude of the flooding and the speed with which the floodwaters rose in some areas. Officials are studying whether “warning fatigue” caused people to either fail to take the warnings seriously or ignore them altogether.

As someone who lives in a hurricane-prone part of the country, I stay fatigued from watching the tropics from May to November, but I don’t have “warning fatigue.” I would describe it as “warning mania.”

I watch the forecasts, review the models, and scan the satellite images. I follow a variety of meteorologists’ pages and weather Twitter feeds. I key in on all the magic words that the National Hurricane Center uses in their discussions when they believe a storm is likely to be more than just a storm.

So I am curious about — and admittedly somewhat jealous of — folks who can go about their daily lives ignoring storm warnings. Who are they? What’s that like? And what does it take to finally get their attention?

In the July AKC Board minutes, the following statement in the President’s Report jumped out at me like the words “dangerous storm surge”:

“It was reported that the mission areas of registration and events are doing very well. While entries are increasing, Management is very cautiously watching registration, as we must be prepared if it is a bubble as people start to return to the office environment.”

First of all, I noted the use of the term “mission areas,” and wondered if it’s now become necessary to affirmatively identify registrations and events as “mission areas,” so that we know that they know what they are.

Second, I questioned what was meant by “we must be prepared”? Prepared for what? What would AKC’s bubble preparedness kit look like?

Mainly, I’m curious what prompted the warning, and I am surprised that it made it into the minutes. AKC rarely casts anything it’s doing in a potentially negative light (on purpose), and even more rarely, publicly. It’s a concession to what most of us recognize — that the gains in registrations over the last year had little do with anything AKC is doing and far more to do with breeders meeting the COVID-driven demand for puppies. But mostly, it seems out of place in the context of all the self-congratulations AKC has engaged in for the last year.

I was interested to see if the August Board minutes offered any new clues, but there was no such cautionary language. In fact, it included the rosy financial report that we’ve come to expect in the last year, touting gains in registrations that exceed budget, and “careful management of operating expenses.”

So why the blip on the radar in July? Or more to the point, why bother to manage expectations? Especially when you have a Board seemingly oblivious to warning signs or unwilling to heed them?

Why didn’t laying off approximately one-third of the staff with only a couple of days’ notice (yet apparently none to the Board) in April of 2020 induce significant concern? Didn’t the fact that employees were left without health coverage in the middle of a pandemic elevate the threat? Did it not matter that many of them had 20-plus years of service but were not yet retirement eligible?

Is the fact that executive compensation as a percentage of expenses holds relatively constant over the years lost on them? Have they not taken notice of the fact that during the same period lower-paid workers have been expected to carry larger workloads to meet the same performance levels? Does the current rush of unbudgeted new hires a little after a year of jettisoning so many employees suggest that there’s way more reactionary management than there is actual preparedness and resiliency?

Where in the world is Jim Cantore?

© Dog News. This article may not be reposted, reprinted, rewritten, excerpted or otherwise duplicated in any medium without the express written permission of the publisher.
Fri, 09/17/2021 - 12:54am