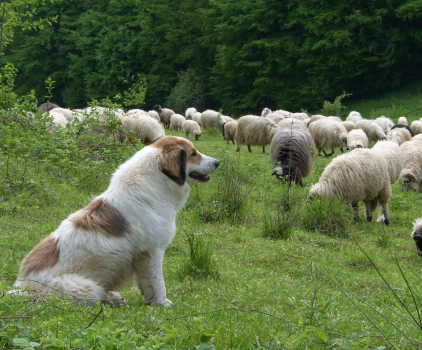 The Tornjak: A Breed Resurrected

A true working breed is a rare sight in these high-tech times. Croatian and Bosnian fanciers have invested a lot of energy and knowledge into re-creating one of their almost-extinct national breeds, the Tornjak. This excellent flock guardian received provisional recognition by the FCI in 2009 and full recognition in 2017. A day in the life of a Croatian shepherd and his dogs.

Zlatko Mavrovic donned his feathered hat, put on his embroidered vest and just to be on the safe side pocketed his cell phone. He picked a sturdy shepherd’s crook from several walking sticks leaning against the cottage wall covered in traditional wooden farm tools and deer heads. After taking a swig of his homemade plum liquor, he gestured to his three black Croatian shepherds. 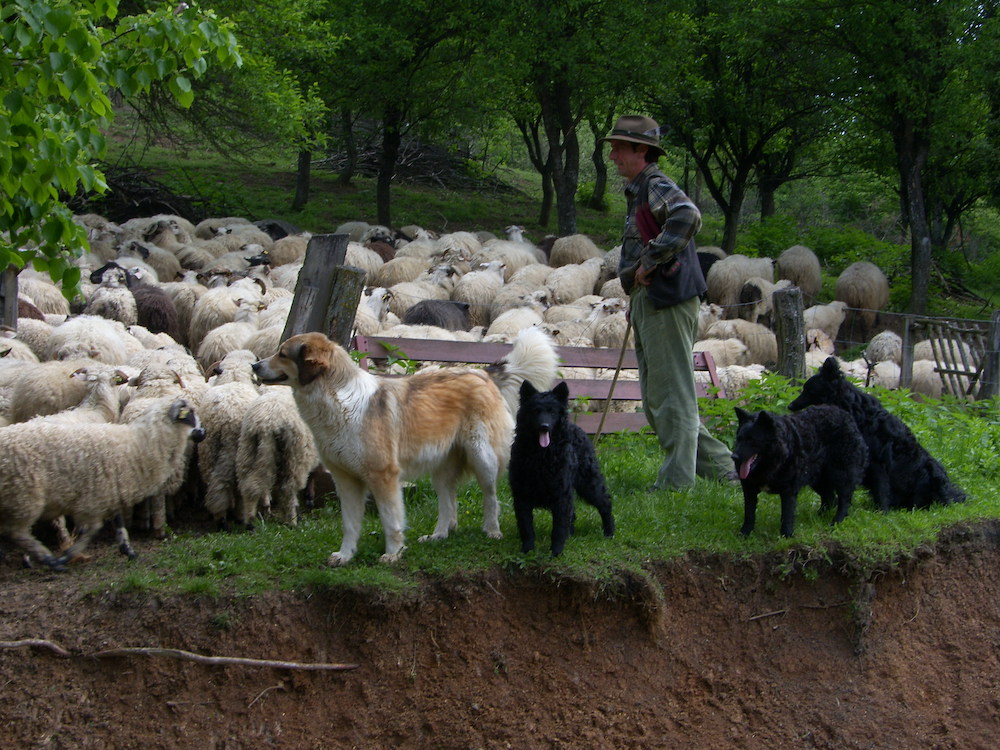 The dogs, which had been sunning themselves lazily just seconds earlier, sprang into action and began to circle Zlatko's flock. The sheep started to move – rams, ewes and little lambs with long woolly curls, streaming from their large pen beneath the farmhouse into the lane leading out to pasture.

The three large Tornjaks stirred. They spread out, one leading the flock, checking the territory ahead, the others watching the flanks. As the flock stopped periodically to graze, their guardians found a vantage spot in the bushes, seemingly resting to preserve energy but at the same time on the alert for any danger that might arise in the wooded, hilly terrain. 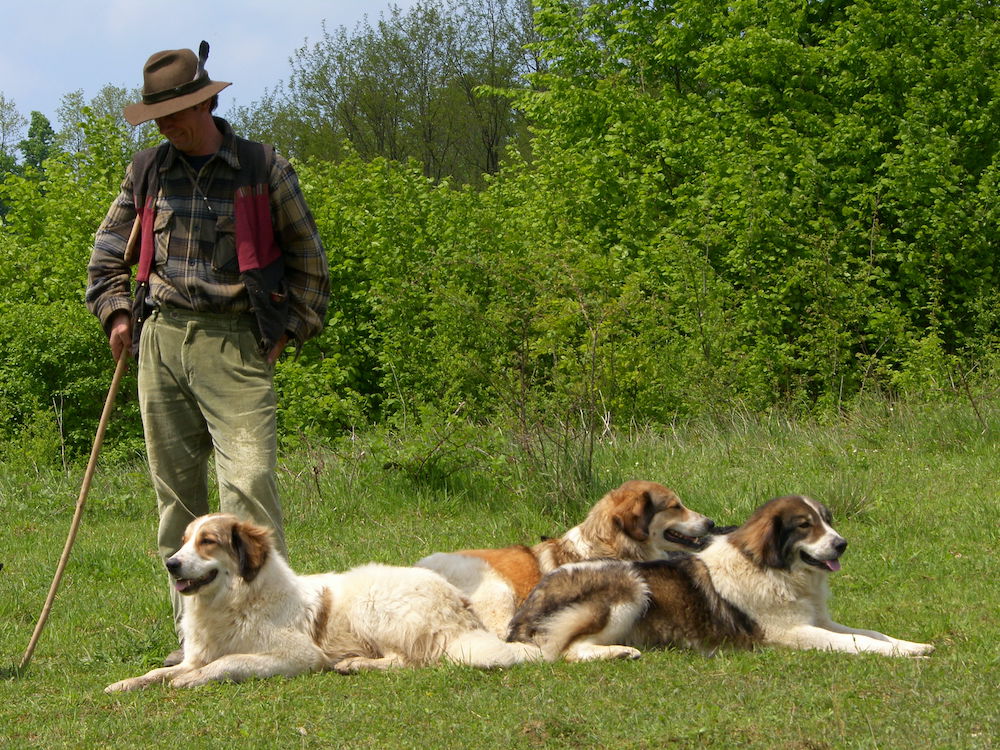 One can never really know what danger lies in store for these sheep. Large and small predators, including foxes, jackals and wolves, may be hungry enough to forage on the meek, defenseless animals and the little lambs in particular. Due to conservation efforts, this part of Croatia has roving pack of wolves; each may be comprised of several dozen of these relatively large and sly animals.

As usual, when wild predators are reintroduced into their former natural habitats, they tend to upset the local chicken, cattle and sheep farmers, due to their tendency to prey on readily available farm animals. The frustrated farmers then decimate these rare animals for fear their livelihood may be endangered. Modern conservation methods have therefore introduced these predators' natural enemies – fierce livestock guardians.

So, in 1968, Sandor Horvath, a former journalist and present-day expert on animal reproduction, took on the task of resurrecting the local flock guardian – the Tornjak. The breed had been neglected due to the cultural trend of modernization. The post-war generation had abandoned farming for more lucrative jobs in the city, decimating both flocks and dogs. Today's generation, including Zlatko, has returned to farms, fleeing the pressure of urban life, with an affinity for nature.

Although there are many flock guardians in various parts of the world, all bred for the same purpose, the motives for reproducing the Tornjak were dual. On the one hand, the Tornjak is able to negotiate the extremely varied geographical conditions in Croatia. On the other hand, Croatians are extremely patriotic and proud of all aspects of their national heritage, including livestock.

To draw a picture of the Tornjak, Horvath visited the old farmers who remembered the breed from before World War II. He researched the various attributes of the breed and determined the makings of a good Tronjak, were, in his words, “a combination of traditional beliefs and experiments with several generations.” He then searched remote mountain farms for specimens of the breed that had not been in contact with other breeds, locating some 30 dogs in total. When he found his foundation stock, four bitches and several dogs, he began the work of reproducing correct, healthy dogs.

“I did not want to bring outcrosses into the breed,” Horvath notes. He therefore had his work cut out for him, calculating the exact matings that would bring desirable results. “We now have over 2,000 Tornjaks, and I am particularly proud of the fact that 90 percent of them are working dogs used by shepherds.” 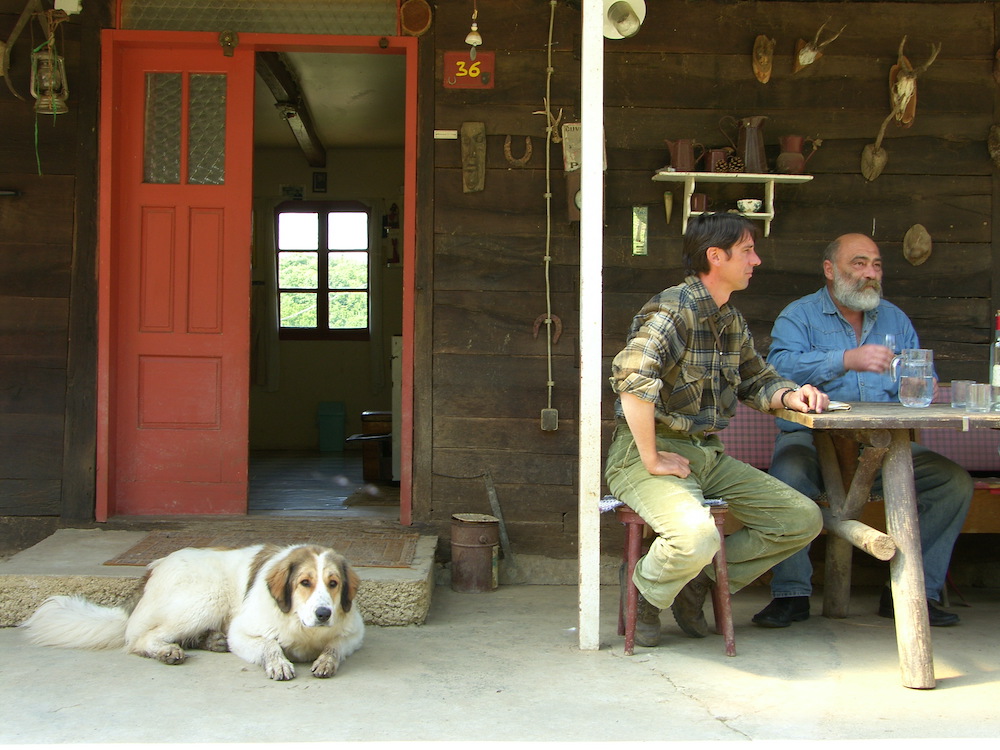 From the coastal plain of Dalmatia with its treacherous marshlands, through rolling hills, to large inland plains stretching into the horizon and steep, precipitous mountains, Croatian terrain is varied, and sheep are taken to pasture in all these areas. The local shepherd dogs are aptly constructed to work these diverse regions.

The Tornjak is not among the taller of the flock guardians. Experts claim the ideal height is around 70 cm (27½ inches), with bitches a little shorter than males. This enables the dog to negotiate mountainous ground with relative ease. The Tornjak is a squarely built dog, with an additional five to 10 percent in length acceptable. One of its salient features is its tendency to amble. Horvath claims this type of gait is more suitable to steep hills than the trot, and on our trek with the herd we noticed all the dogs walking appropriately.

The Tornjak is never completely white. It has a variety of patches and markings in a diverse range of hues – from black to yellow – each dog differing from its mates. These markings enable the shepherds to identify their flocks from afar, to tell the dogs from the sheep (white dogs blend in with the flock) and to discern them from wolves. 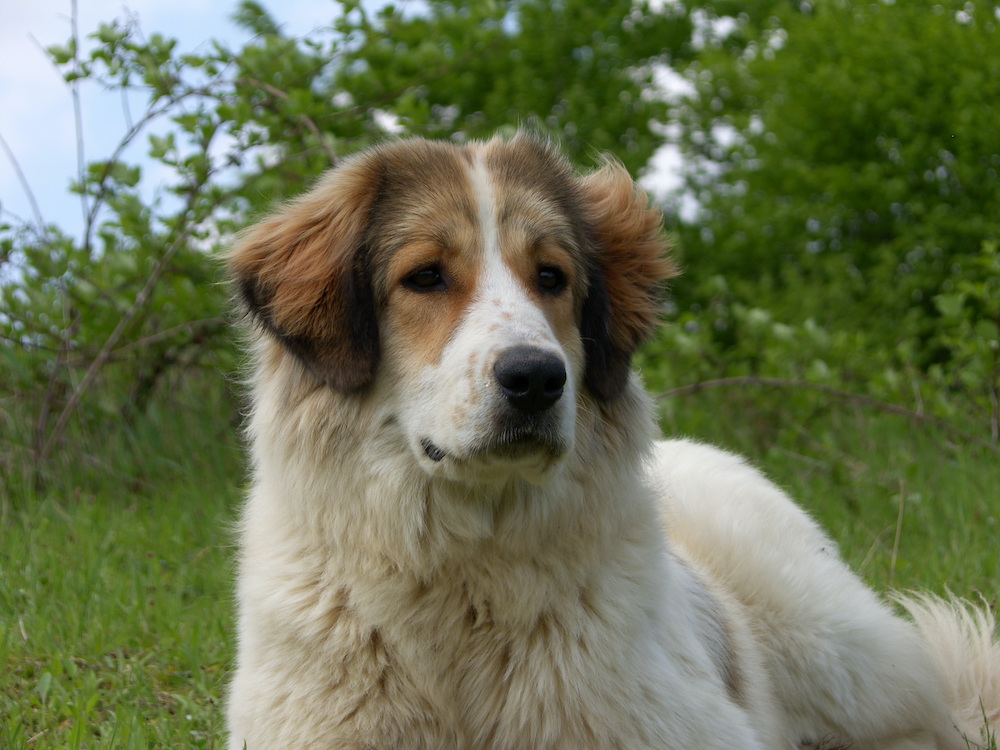 The large head is mastiff-like, with broad, square skull and broad muzzle that should never be snipey. It is carried on a characteristically long neck, allowing the dog to overlook the territory it guards even when lying down. The short-coupled topline should be level, never sloping, roached or sagging. The large, plumed tail is carried over the dog’s back, although not lying close to it, a further expression of the short back but also serving as a “flag” that assists the shepherd in identifying his dogs.

However, beyond all the physical properties mentioned above, the Tornjak is relatively unique in its work. The dogs work in groups of three or more, depending on the size of the flock. They work on instinct, older dogs teaching the younger ones by example. The young puppies are socialized with the flock at birth, assimilating the sheep into their “family.” However, at the age of about five months they are separated from the sheep, only working with them again when they reach adulthood.

When going out with the sheep, the Tornjak will first scout out the terrain. Reaching the pasture, the oldest of Zlatko’s three bitches (in itself a rare phenomenon because usually the dogs go out with the flock while the bitches remain on the farm) went down below the grazing sheep and around them to see whether any danger lay in store. After she was satisfied that her flock was not at risk, she found a spot in the shade and lay down. 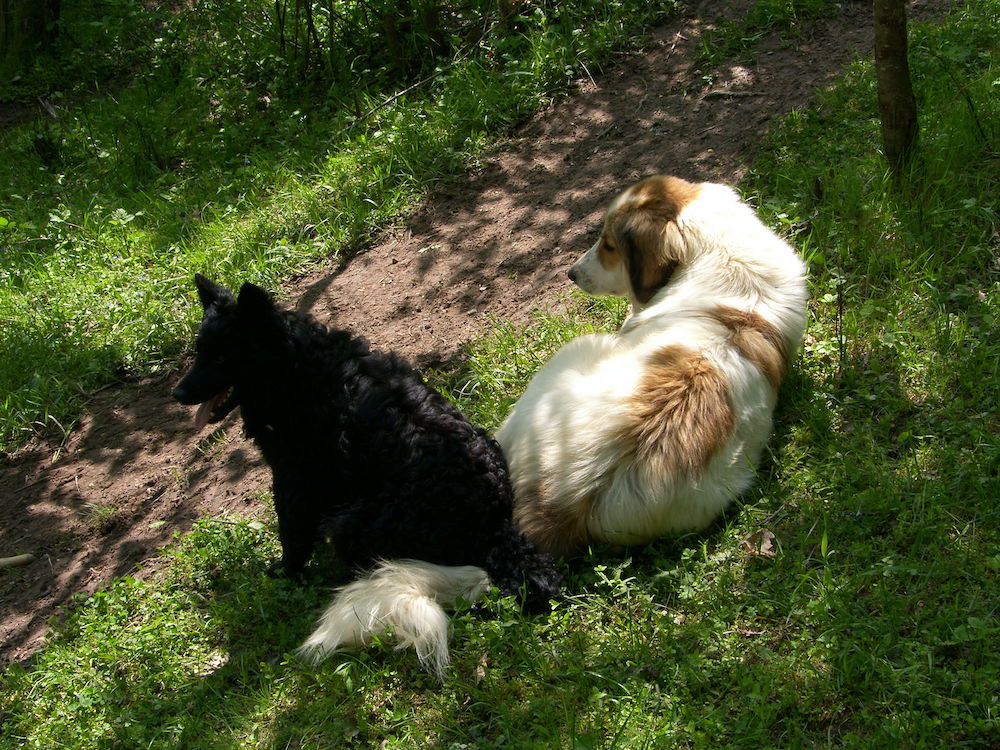 Suddenly, the dogs sprang up and ran down the slope to the fence of the abutting farm. The farm dog had burst into vigorous barking at the sight of a passing vehicle, triggering the Tornjaks to assure their flock’s safety. Again, they returned to higher ground, lying down but using their long necks to lift up their heads and scan the area.

One of the smaller sheepdogs came up to one of the Tornjaks and sat on its tail, a symbol of the strong relationship between the two breeds working together with their owner. It then invited the big dog for a short, friendly tussle, and the two played together for a while.

Zlatko’s dogs displayed the amble typical of the breed. They went at a slow pace that would sometimes turn into a faster trot when required to flank the sheep. The three bitches are short coupled; according to Horvath, this is the most desirable type within the breed. There are two additional types: one a little longer in body with a sloping topline and tail that is carried low, and the other more of a mastiff type, heavy and slow moving. 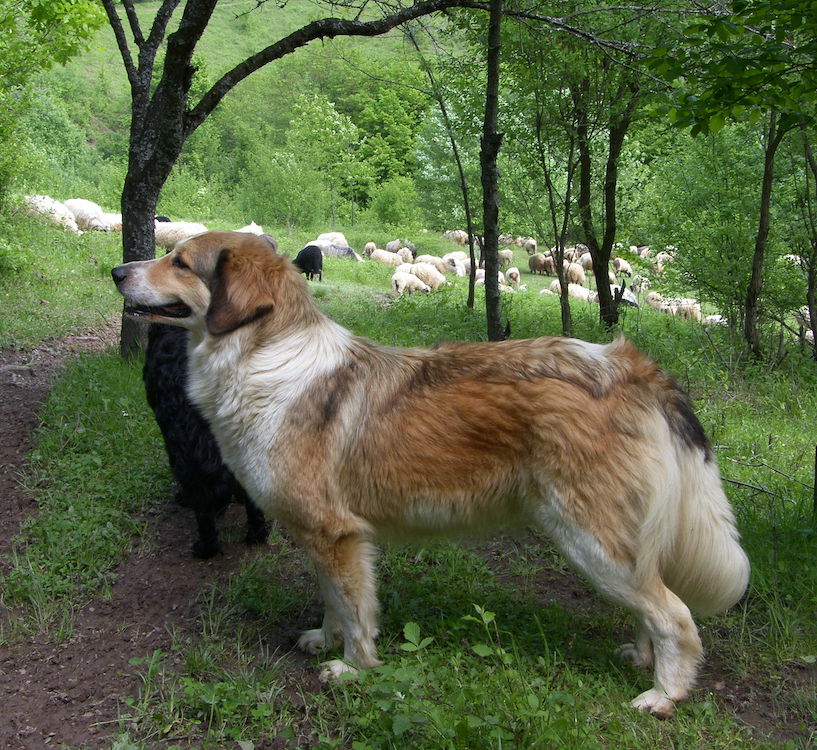 The Tornjak is not a typical family pet, although some people do keep them as companions. They are zealous guardians, a bit wary of strangers. One may enter their territory on receiving their owner’s approval, but it is definitely not advisable to try to leave without proper permission. They are very strong dogs, both physically and mentally, and do not take well to the role of “servant,” preferring to be their human’s partner. The right person for a Tornjak is someone who is able to empathize with an intelligent creature that can solve problems.

Although Horvath and Zagreb Tornjak Club secretary Marko Vojic are quite proud of the fact that most Tornjaks are not house pets but actually practicing their traditional work, turnout at shows is quite adequate, with breed specialties attracting entries of several dozen dogs. The shepherds, however, cannot grasp the need to attend these affairs, since they require their dogs for work. 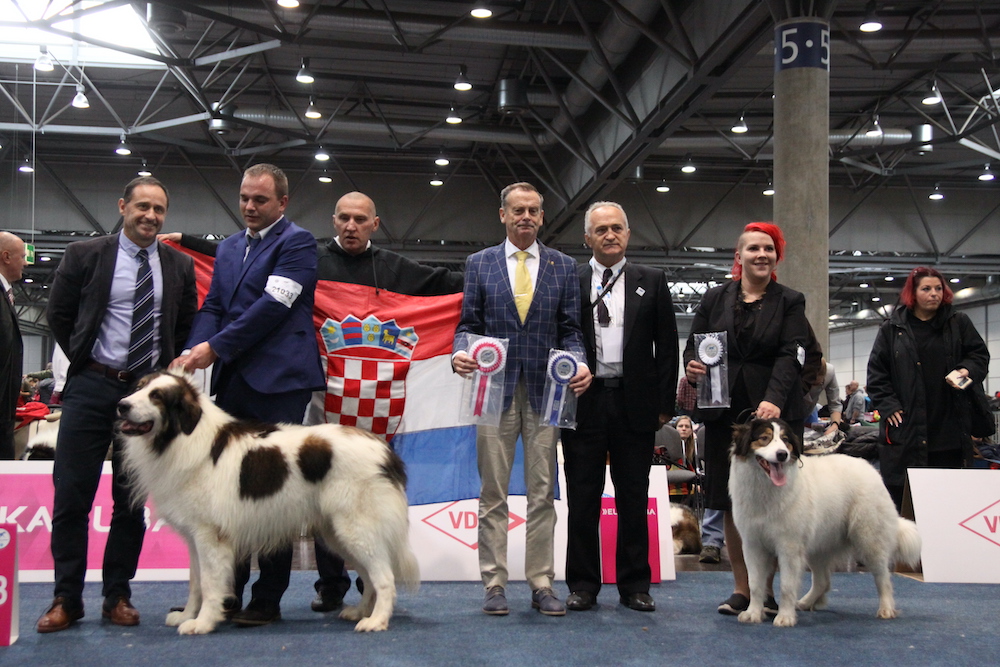 “At the beginning, it was not easy to persuade local herders to accept our national breed for working,” Vojic said. “With the help of government and EU Life Foundation funding, we were able to place approximately 280 Tornjaks with shepherds. The results spoke for themselves after farmers realized they could rid themselves of the predators and now they are willing to purchase puppies.”

Vojic explained the meaning of Tornjak, a name derived from the Croatian word “tor” meaning “sheep pen”; the entire name means “guardian of the pen” – an appropriate descriptive.

Horvath believes indigenous breeds, or inherited breeds in his words, are part of the cultural heritage of their country. He has taken an active part in reinstating breeds of cattle and is involved in other species of domestic animal recognized by the Croatian government, including horses, goats, sheep, poultry, and even pigeons and bees.

“In the ’70s, I was sure I was looking at the last dogs in the breed, but now we have several thousand, and my work is done,” says Horvath. “The breed is a living population, not just a written standard. The present standard accepted by the FCI is a preliminary standard based on cooperation between Croats and Bosnians who both have a claim to the breed. The standard is a convention, and we can still discuss it and change it if necessary. The real thing is the gene pool and we can only serve it, not master it.” 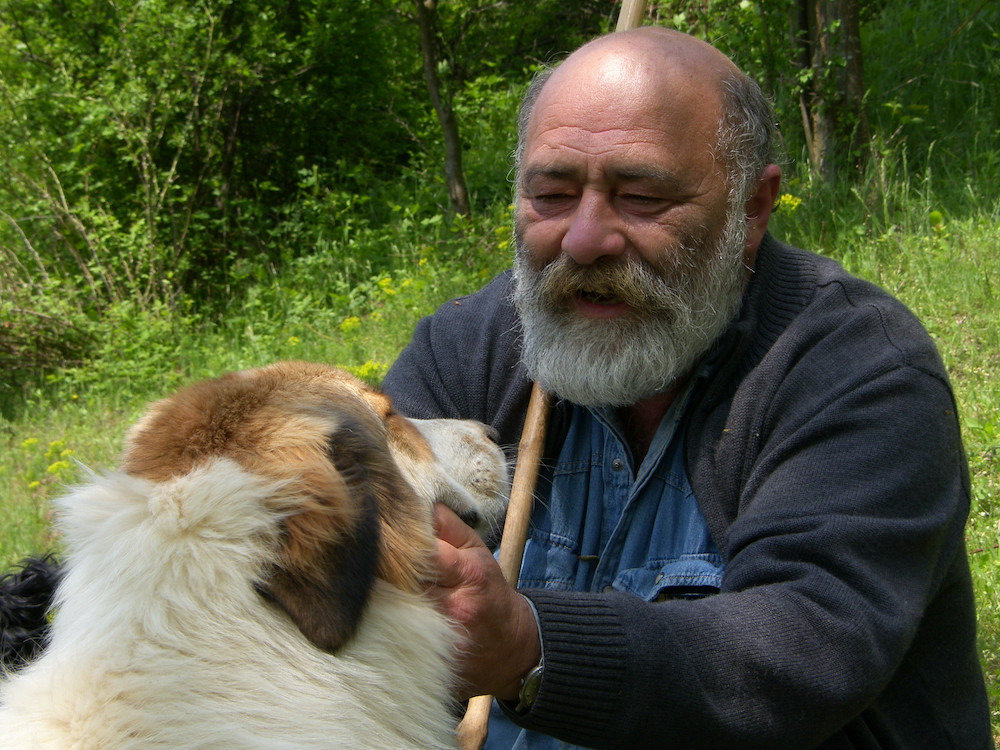 The last of the lambs and stragglers arrived back in the pen. The dogs strolled back to their master’s doorstep and lounged at his feet. Zlatko brought out some local ham, bread, onions and the inevitable plum brandy, and we all downed a swig in honor of the resurrected breed.

A nice end to this story was at the World Dog Show in Germany in 2017. That was right after the FCI gave the breed full recognition and the first show in which dogs could get a CACIB and of course the World Winner title. I was very happy to be at the ringside when Dutch judge Hans Van Den Berg awarded the first titles to dogs in the ring. The happiness shown by the large number of Croatians who flocked to the ring was great and expressed the nation’s pride in their breed.

© Dog News. This article may not be reposted, reprinted, rewritten, excerpted or otherwise duplicated in any medium without the express written permission of the publisher.
Mon, 08/09/2021 - 4:02am