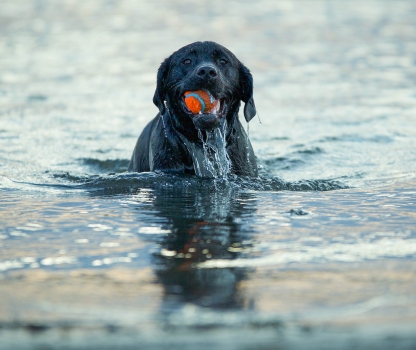 Must Be Something in the Water

Dealing with toxic algae and saltwater poisoning in dogs
By
Merry Fitzgerald, DVM

Why are some ponds dangerous for dogs to swim in?

If the water surface of a lake or pond is colored blue or green, it may indicate the presence of cyanobacteria, also known as blue-green algae. These microscopic bacteria also grow in backyard fountains, garden pots, birdbaths and anywhere there is stagnant water. Wherever it is found, blue-green algae can be deadly toxic to dogs.

Toxic algae blooms occur throughout the United States and Canada. The blooms are usually blue-green, but can be red and brown. Algae develop in fresh water or salt water. It grows quickly in hot, humid climates where the water is warm. The largest algae blooms occur in late summer and early fall, although the season may be longer in warmer climates.

The type of algae, or “pond scum,” which produces poisons such as microcystins and anatoxins, is cyanobacteria. These toxins affect dogs, as well as people, livestock and other pets that swim in and drink algae-contaminated water. Cyanotoxins are powerful, natural poisons that can cause rapid death by respiratory failure. In addition to poisoning, red or irritated skin infections may develop after exposure to the algae.

What are the symptoms of blue-green algae poisoning?

Your dog may show signs of cyanobacteria poisoning almost immediately after drinking or swimming in contaminated water. Symptoms can begin anywhere from 15 minutes to several days after exposure. The signs depend upon the toxin involved.

Microcystin is a hepatotoxin, which means it will cause liver damage or liver failure. Signs of liver injury include weakness, vomiting and diarrhea. Severe cases may progress to having seizures, shock, coma and even death.

Anatoxins are neurotoxins that attack the nervous system. Signs of neurotoxicity include excessive salivation, muscle tremors and eventual paralysis. In cases where the nerves that control breathing are affected, there will be a blue discoloration of the skin and gums and difficulty breathing.

Unfortunately, there is no antidote for the toxins produced by blue-green algae. The prognosis for affected dogs is poor. Immediate veterinary treatment is necessary. Vomiting will be induced to remove the algae from the stomach. Gastric lavage, which is flushing and “pumping” of the stomach, may be performed. Activated charcoal is given orally to absorb and deactivate the toxin.

After the lavage, aggressive supportive therapy, including intravenous fluids and plasma to replenish electrolytes, regulate blood sugar, support vital organ function and prevent shock, may be started. Muscle relaxers help dogs with muscle tremors. Anti-convulsant drugs are given if the dogs are having seizures. Atropine reduces excessive salivation. Sadly, in some cases, euthanasia is the only option.

Recovery can take weeks or even months. Dogs that recover from cyanobacteria poisoning will usually have lingering liver damage. Prevention is the best plan. Block access to contaminated ponds and lakes. Only allow animals to drink from fresh, clean water sources.

Do not let your dog swim in water when algae may be present. The simple act of licking the water off their fur could be fatal. If you think your dog has been exposed to blue-green algae, rinse him off immediately with clean water and get him to your veterinarian ASAP.

Is it true that my dog can get sick from drinking salt water?

Yes, salt water is toxic to dogs if they drink too much of it. We all know the beach is a great place to exercise and play with your dog. However, exercise causes increased water loss as a result of muscle contraction, respiration – especially panting – and evaporation from the skin. Your dog will want to drink water to replace the lost fluid. If you do not provide fresh water often while at the beach, your dog will want to drink salt water. Some dogs get so caught up in the excitement of the waves that they swallow large amounts of salt water without realizing it.

Salt water has an osmotic effect. The excess salt, or hypernatremia, draws water from the blood into the intestines. This causes diarrhea, which contributes to the dehydration. If your dog drinks too much salt water too quickly, he could vomit, leading to further fluid loss and dehydration.

Sand ingested with salt water will amplify the effects of salt water. It irritates the lining of the intestines. Bacteria, algae and other microorganisms in the water may also cause your dog to feel sick.

What is salt poisoning?

Although salt is a natural necessary substance for the health of your dog, consuming excess amounts can cause serious illness or death. Salt maintains correct fluid levels in the body and moderates your dog’s metabolism. Excess amounts of salt cause chaos in body functions.

In most cases, if your dog consumes too much salt, he will drink fresh water to offset the effects and no harm will be done. However, if there is not fresh water available or if the dog consumes a large amount of salt in a short period of time, serious changes start to occur in the cells of the body. The cells begin to release water to even out the levels of salt in the blood. The lack of water leads to the destruction of brain cells, and your dog will develop neurologic symptoms, such as dizziness, headache and seizures.

The chemical composition of salt is half sodium and half chloride. Hypernatremia is the term for high levels of sodium in the blood. This condition will cause muscle cells to lose moisture, shrivel up and stiffen. Dogs in this state will exhibit shaking and jerking behaviors. Without fresh water, dehydration quickly follows, resulting in rapid heart rate, fainting, confusion and labored breathing.

The most commonly reported cause of salt poisoning in dogs is the ingestion of large amounts of salt water. However, dogs will also be at risk if they consume other items such as homemade play dough, rock salt, table salt, soy sauce or paintballs. Lack of fresh water, frozen water sources or malfunctioning automatic waterers can also lead to salt toxicity.

What is the treatment for salt poisoning?

If you think your dog has consumed a large amount of salt, contact your veterinarian whether or not your dog shows any symptoms. The tests your veterinarian will need to perform are a complete blood count (CBC), blood chemistry and blood gas levels. A urine sample will also be checked to determine your dog’s sodium level.

Radiographs, MRI, CT scan and an ultrasound may be done to determine if there is any damage to your dog’s heart, brain and lungs. Diagnostic tests to evaluate heart function will be run as well. This includes an electrocardiogram (EKG) to measure the electrical impulses of your dog’s heart.

The dog may need to be hospitalized for oxygen, intravenous fluid therapy and electrolytes to correct any dehydration. The level of salt in the blood needs to be reduced gradually. A sudden change in sodium levels can trigger a cardiac arrest or cerebral edema (swelling of the brain). It may take up to three days to bring the salt levels down to an acceptable level, depending upon how high the sodium levels are initially.

Sodium levels can also be reduced by administering warm-water enemas every few hours. If cerebral edema is already present, your dog will be given mannitol, or a corticosteroid such as dexamethasone, to reduce the inflammation in the brain.

Once stabilized, the dog is usually hospitalized for observation for an additional 24 hours. During the recovery period, it is important to keep the sodium level in your dog’s blood under control by feeding a low-sodium diet. Follow-up tests for hypernatremia should be done in 30 days. As long as there is no damage to the brain, heart or lungs, the prognosis for full recovery is good.

© Dog News. This article may not be reposted, reprinted, rewritten, excerpted or otherwise duplicated in any medium without the express written permission of the publisher.
Sun, 06/13/2021 - 1:05am