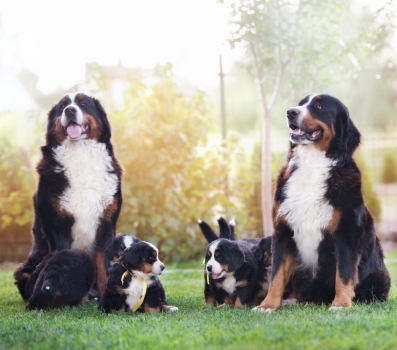 Estrogen and testosterone are important hormones for sexual reproduction, but elevated levels can be concerning.

When it comes to sex hormones, there can be too much of a good thing
By
Merry Fitzgerald, DVM

Estrogens are hormones produced by females of the species in their ovaries and placenta. Estrogen is most commonly recognized as the hormone that controls feminine sexual development, behavior and reproduction. It is also produced by male dogs in the Leydig cells of their testicles, which produce testosterone. Both sexes produce estrogen in the adrenal glands.

Is estrogen toxic to dogs?

In some situations, it can be. Hyperestrogenism is a condition in which excessive estrogen is present in the body. This causes complications of the reproductive organs and even estrogen toxicity. Hyperestrogenism may occur as a result of excessive estrogen secretion in the body, administration of estrogen-containing medications, or accidental exposure to other sources of estrogen.

What are the symptoms of estrogen toxicity?

There is a wide variety of symptoms depending on the dog’s age, sex and cause for the excess estrogen.

Toy breeds are especially sensitive when exposed to transdermal hormone-replacement therapy patches or creams being used by their owners. These products often are applied to the forearm of the person, and the small dog is exposed by being held in in the arms frequently. I recently had a toy-breed patient with a low sperm count due to exposure to the owner’s hormone-replacement therapy. Lately on the veterinary blogs, there have been several cases studies of puppies less than six months old with greatly enlarged vulvas after coming in contact with their owners’ hormone creams.

Male dogs may pass blood in their urine as a result of benign prostatic enlargement. This enlargement can lead to prostatic dysfunction and reduced fertility.

Older male dogs with testicular tumors may have a decreased libido and attract other male dogs. There is often a notable difference in the size of the testicles – one will be enlarged and the other will appear shrunken, or both testicles may be reduced in size. Some dogs with hyperestrogenism will have enlarged male mammary glands, which is a condition known as gynecomastia.

Young female dogs may have elevated estrogen levels secondary to cysts in the follicles of the ovaries. Older female dogs can develop ovarian follicular cysts as well. These cysts form when the egg, known as the follicle, develops in the ovary, but ovulation does not occur normally. Tumors of the ovaries may also develop as bitches get older.

Normal amounts of estrogen will cause the usual signs of estrus, or heat, in unspayed bitches, such as bloody vaginal discharge and enlargement of the vulva and mammary glands. If these symptoms are present in a spayed female, she may be suffering from hyperestrogenism.

Aplastic anemia is another condition that can occur in males or females when estrogen levels are higher than normal. Estrogen can suppress the production of platelets and thrombocytes in the bone marrow. These blood-cell fragments originate in the bone marrow and travel in the blood as it circulates through the body. Platelets and thrombocytes act as “plugs” in the blood vessels to activate clotting and stop bleeding. Pale gums or tiny, pinpoint areas of bleeding are symptoms of aplastic anemia.

Darkened, blackish shin, known as hyperpigmentation, usually in the groin or armpits and non-itchy symmetrical hair loss on the flanks, are other signs of excess estrogen.

What is the treatment for estrogen toxicity?

If the overproduction of estrogen is caused by hormone supplementation, medications that contain estrogen – such as diethylstilbestrol (DES) or Incurin, prescribed for hormonal incontinence –should be discontinued. Consider using alternatives such as phenylpropanolamine (Proin). Avoid exposing the dog to estrogen-containing creams or patches. Owners should not stop their medication, but rather relocate the placement of the cream or patch to an area that will not come in contact with the dog.

The treatment recommended for hyperestrogenism in intact male and female dogs is surgical ovariohysterectomy (spay) for females and castration (neuter) for males. Surgical removal of only one ovary containing a tumor for bitches or one testicle containing a tumor for males can be considered in dogs valuable to a breeding program. Prolonged high levels of estrogen may affect the uterus and decrease fertility even if the abnormal ovary has been removed.

Medications, such as synthetic erythropoietin, darbopoietin and granulocyte stimulating factor, can be given in cases of aplastic anemia to encourage production of red and white blood cells in the bone marrow. Injections of iron dextran or multiple daily doses of oral iron may be necessary to support regeneration of red blood cells.

Repeat blood counts and bone-marrow evaluations will be necessary to evaluate the response to therapy. Signs of regeneration of blood cells may not appear for weeks or months. Most cases of hyperestrogenism resolve by eliminating the source of the excess hormone. A lack of response to treatment means a grave prognosis.

Testosterone is the hormone responsible for the development of male sexual characteristics. It is a type of androgen produced primarily in the testicles in cells called the Leydig cells. Women’s ovaries also produce testosterone, although in much smaller amounts.

Testosterone is most often associated with sex drive and plays a vital role in sperm production. It affects bone and muscle mass, fat distribution and red blood cell production. The brain and pituitary gland control testosterone levels. Despite being a male sex hormone, testosterone also contributes to sex drive, bone density and muscle strength in females.

Can a dog have too much testosterone?

Yes, hyperandrogenism in dogs is a rare syndrome seen mainly in intact male dogs. It is characterized by elevations of masculinizing sex hormones, such as testosterone, in the blood. This condition is most frequently seen in intact male dogs, but has been documented in bitches as well.

The elevated levels may be the result of excessive hormone production by the testes, ovaries or the adrenal cortex. Testicular tumors, primarily interstitial cell tumors, can produce androgens.

Hyperandrogenism can also occur with the administration of synthetic androgens, such as mibolerone (known as Cheque Drops), which is given to bitches to prevent them from coming into heat. Other sources of exposure to synthetic testosterone are owners who are receiving testosterone-replacement therapy. The treatment can be administered by skin gels and patches, injections and tablets that are absorbed through the gums. As with estrogen hormone replacement therapy, dogs that come in contact with these creams, gels and patches, may develop elevated testosterone levels.

Symptoms of hyperandrogenism are aggressive behavioral changes, abnormalities of the reproductive tract, infertility and skin problems. This disorder tends to occur in Pomeranians, Chow Chows, Poodles, Keeshonden and Samoyeds. Testosterone levels can be measured by taking blood samples.

The treatment depends on the particular underlying cause of the dog’s hyperandrogenism. In cases where it has been determined there is no exposure to synthetic androgens, surgical neutering of intact dogs or bitches is recommended. Surgical excision of any testosterone-secreting masses should be performed. Testing to evaluate the function of the adrenal glands may be needed. Once the cause is determined and the appropriate treatment initiated, the response to therapy is generally favorable.

© Dog News. This article may not be reposted, reprinted, rewritten, excerpted or otherwise duplicated in any medium without the express written permission of the publisher.
Sat, 06/26/2021 - 9:02pm