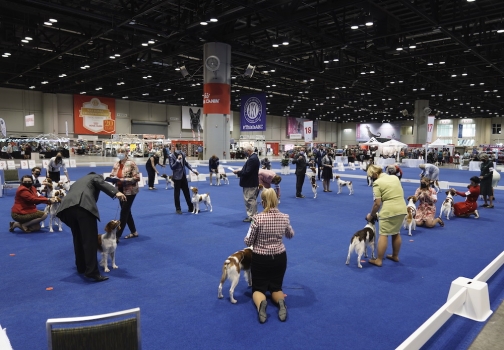 One for the Record Books

The 2020 AKC National Championship presented by Royal Canin was on track to be a glorious celebration of the show’s 20th-year anniversary event. Everyone at AKC and Royal Canin was gearing up to present another illustrious affair to the fancy, with extra pomp and circumstance to highlight the milestone.

Well, I think everyone knows that a global pandemic forced a change in plans. But with hundreds of hours of planning and great effort, we hosted a safe celebration that will go down in the history books as an event like no other.

At nine months out, both companies made the decision that we would proceed with our planning knowing that everything could be up in the air until the very last minute. Ever month we checked in with the Orange County Convention Center as we evaluated, planned and prepared to hold the event. With an abundance of caution, recommendations from medical advisors and knowledge of best practices and procedures being utilized by the governing bodies of other sports as they put on their events, we continued with our preparations.

Our sport falls into a unique category as a sporting event. There is a difference between a contact sport and a sport involving livestock, and we are fundamentally considered a “non-tactile sport.” By the end of the summer, it was clear the fancy was attending dog shows in a responsible way, and dog shows were being held successfully on an increasing basis. Both companies shared with their staff that the events would move forward.

Some staff flew, others drove. Everyone was given the latitude to do whatever they needed to ensure their own personal safety and comfort level. I chose to drive. I ate only take-out, outdoors or in a remote corner of an empty restaurant. At times I was “laminated” like my high-school diploma with mask, face shield and fan on my person!

The convention center met every CDC protocol, which included formulas for social distancing, high-tech sanitizing procedures and the most rigorous air-conditioning apparatus that far exceeded most industry standards. The air was changed three times every hour, and fresh air was returned through a state-of-the-art HEPA ventilation/filtration system.

AKC and Royal Canin also added other layers of protection for attendees. It was widely shared that to hold these events special requests had to be implemented. Many were already in effect at previous shows being held throughout the country: Waivers were required to be filled out, temperature checks every day, everyone always properly masked, no ringside seating, hand-sanitizer stations everywhere, low-contact interaction between stewards and judges, exhibitors spacing themselves out at all times, face guards on tables and in the food areas … the list was long, and was fluid when it needed to be.

We did have a visit from local authorities (not unexpected), and they shared with us that our event protocols might just have been the best of any attraction being held in the city of Orlando. We had a diligent “Covid-19 response team” that was meticulous and ensured that everyone at the show was following the established guidelines and regulations.

The event timeline followed our usual flow. The “gold rush” for unloading was rather anticlimactic this year: Having so much additional grooming space allowed everyone to keep a comfortable distance from each other, and the reserved grooming had tall drapes separating the spaces. (We will be keeping that component moving forward.) The exhibitors seemed to understand the limit on high-speed dryers, and Harry Miller’s guys were good at holding the line.

The Orlando Cluster pulled off its shows in impressive fashion, knowing that Linda Rowell and the other club chairs had no fewer than 20 judges to be replaced. The specialty day is always the busiest, and this year was no exception. Some of the group shows had record entries, some breed clubs took a pass, but all plan to be back next year.

We had signage everywhere and frequent announcements to “Show, Shop and Go.” We were pleased that so many of our longtime vendors, many who have been with the ANC since the first event, came – not because they expected to hit records sales, but because they “needed” to see one another and the exhibitors, to find a sense of normalcy during a very difficult time. Some shared with me their unexpectedly good sales, others had marginal gains, and unfortunately some had a leaner year than hoped for.

The ANC had many who couldn’t make it: judges, our lead photographer, our longstanding cast of stewards and many of our respective staff who work the events. The AKC Executive Field Staff stood tall all week, and I can’t imagine these events going as well as they do without them. Many exhibitors in all the competitions were quick to thank all the clubs and principals, sharing how much they appreciated the effort to hold the events. Many noted how nice it was to not have the level of detail diminished: the flowers, the massive rings, the carpets, everything that makes these events a wee bit special.

And the most “special” of all were the DOGS … everywhere a great dog, a great performance, a new record made … all the things that make the AKC National Championship and Royal Canin so proud.

Members of the fancy made the choices with which they were comfortable. Any situations were handled in the appropriate manner under the advisement of the CDC rules and the wellness protocols implemented.

Twenty years … and perhaps this will be the one most remembered.

© Dog News. This article may not be reposted, reprinted, rewritten, excerpted or otherwise duplicated in any medium without the express written permission of the publisher.
Wed, 01/06/2021 - 6:20pm