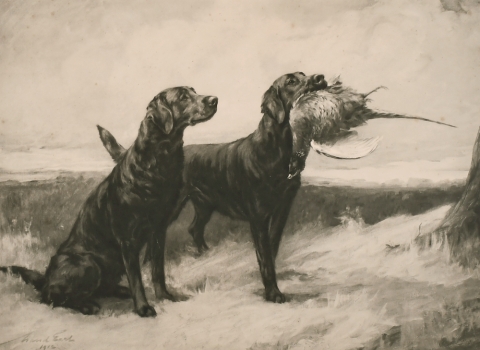 Lithograph of the Dungavel Labrador Retrievers by Maud Earl.

Nick Waters offers up a doggy variety, from Maud Earl’s Labrador Retrievers to an animated Cartier Dachshund
By
Nick Waters

For her portrayal of the purebred dog, Maud Earl is virtually everyone’s favorite artist on both sides of the Atlantic, but prices for her work have slipped back to what they were a few years ago. One of her most admired paintings of gundogs is the one she completed of two black Labradors titled “Waiting Her Turn,” a dog standing holding a cock pheasant and a bitch sitting patiently beside him, both looking up at a handler who is out of view. The bitch is Dungavel Jet, and the dog Peter of Faskally.

The Dungavel dogs were owned by the Duke and Duchess of Hamilton, and although their dogs were usually handled by a handler the Duchess ran Jet herself to win the Kennel Club Open Stake in 1908. Jet was closely bred to dogs owned by the Duke of Buccleuch, one of the early breeders of Labradors who did much to help the breed become established.

Field Trial Ch. Peter of Faskally was one of the great field-trial Labradors of all time. No fewer than 32 of his progeny actually won or were placed in field trials, and these included one champion on the show bench and two field-trial champions. Peter was owned by Mr. Archibald Butler and was the winner in 1911 of the first Champion Field Trial Stake for Retrievers.

The original was sold by Bonhams in New York in 2011 for an above estimate $103,700. Parker Fine Art Auctions offered a signed lithograph in a recent sale, and this sold for a below estimate £240.

The modern Bull Terrier evolved throughout the 19th and early 20th centuries to the Roman-nosed dog we know today. In the middle years of the 19th Century, when the Kennel Club was founded and breeders started breeding for type and purity of lineage, people like James Hinks, Sewallis Shirley (who founded the Kennel Club) and other men living in the English Midlands were the ones who laid the foundations. They standardized the types that were in the area bred to kill vermin. 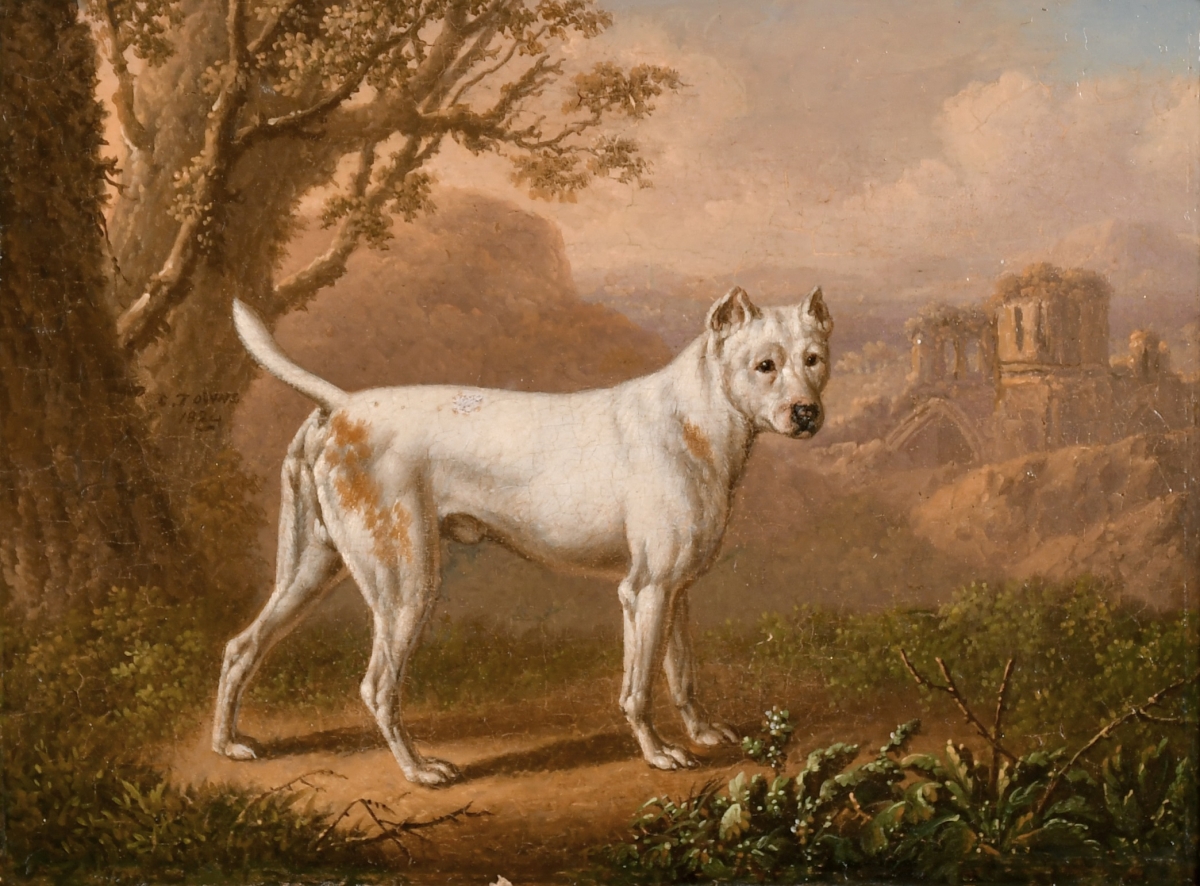 Parker Fine Art Auctions in a recent sale sold a painting by the Wigan-born landscape and animal painter Charles Towne of the type of white dog that would evolve into the Bull Terrier. Dated 1824 it sold within estimate for £1,100. 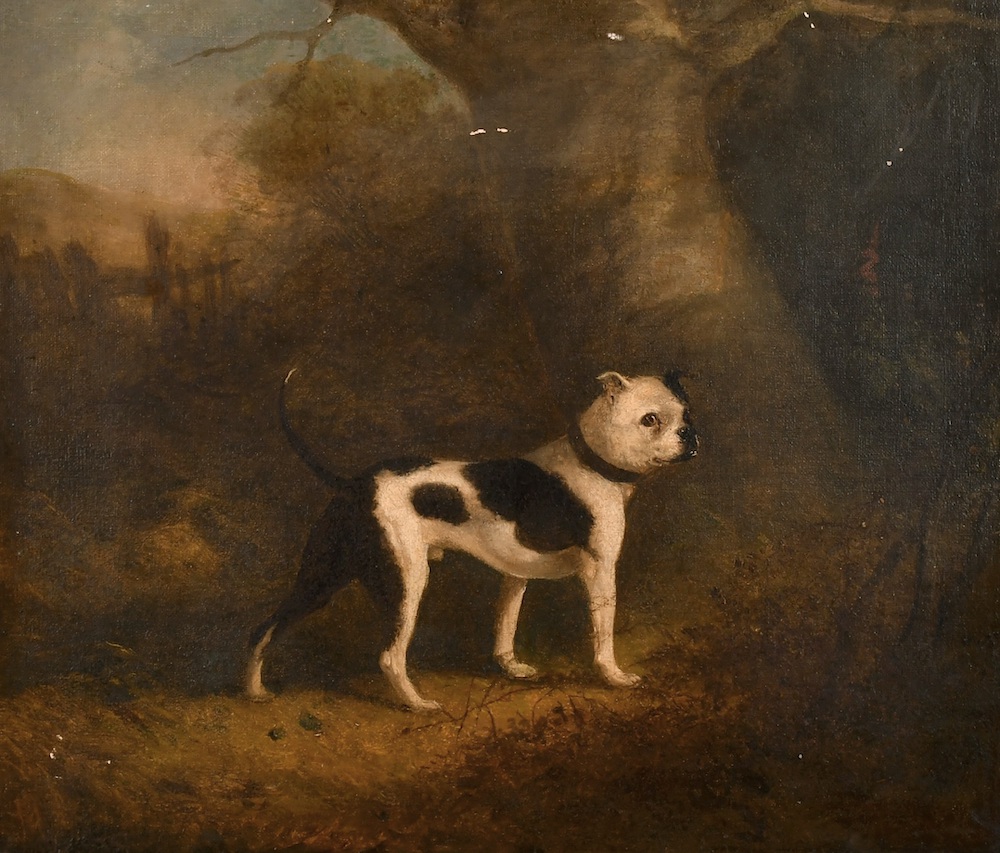 The Bulldog was in a similar situation to the Bull Terrier, inasmuch as breeders during the middle and latter years of the 19th Century created the modern-day Bulldog, although the breed we know resembles very little the athletic Bulldog of old capable of baiting large animals. Self-taught artist William Joseph Shayer’s painting of a dog named Uncle is a good example of the early type of Bulldog. This picture also appeared in Parker’s sale, selling for a low estimate £500. 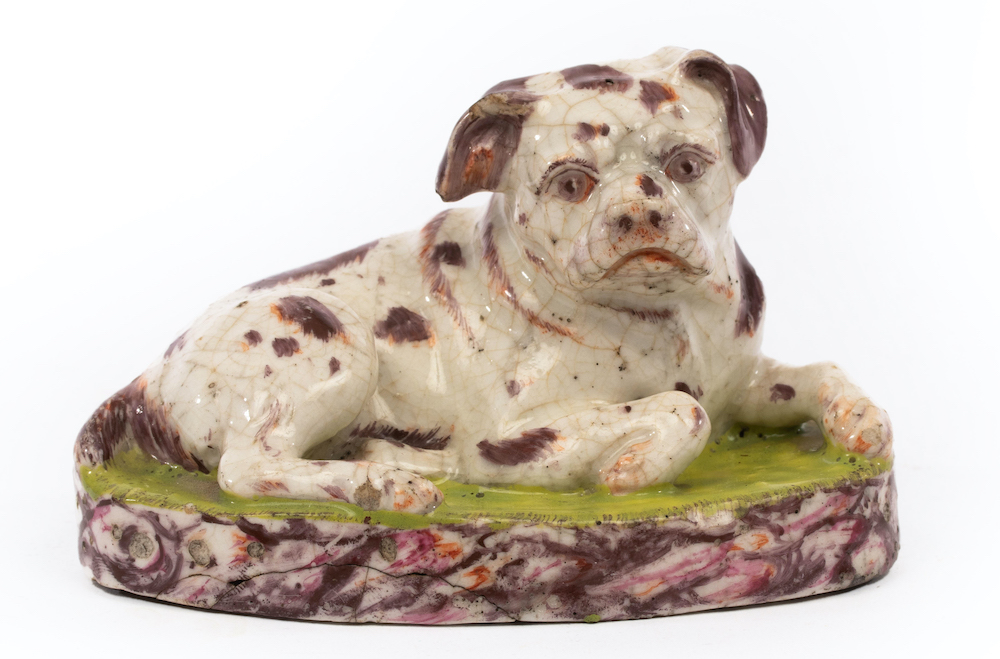 One of the most famous Pugs of all time is artist William Hogarth’s Trump, although the jury is out as to his purity. He has been variously described as “a mongrel” and “no particular beauty.” The dog was immortalized by Hogarth in his “Self-Portrait with Trump” and has been much copied since. Such a prominent place did the little dog have in art and art history that models and paintings said to be of Trump exist; most, in my opinion, should be treated with more than a little suspicion. It is the easiest thing in the world to make a claim over something in the knowledge that it will be virtually impossible to prove otherwise.

Undoubtedly the strongest contender for being a model of Trump is one made in terracotta by the French-born but London-based Louis-François Roubiliac. The original piece was known to have been owned by the Hogarths and was sold when the artist’s widow died in 1789. A copy of the Roubiliac by the Chelsea porcelain factory was offered by Chorley’s with an estimate of £3,000-4,000. 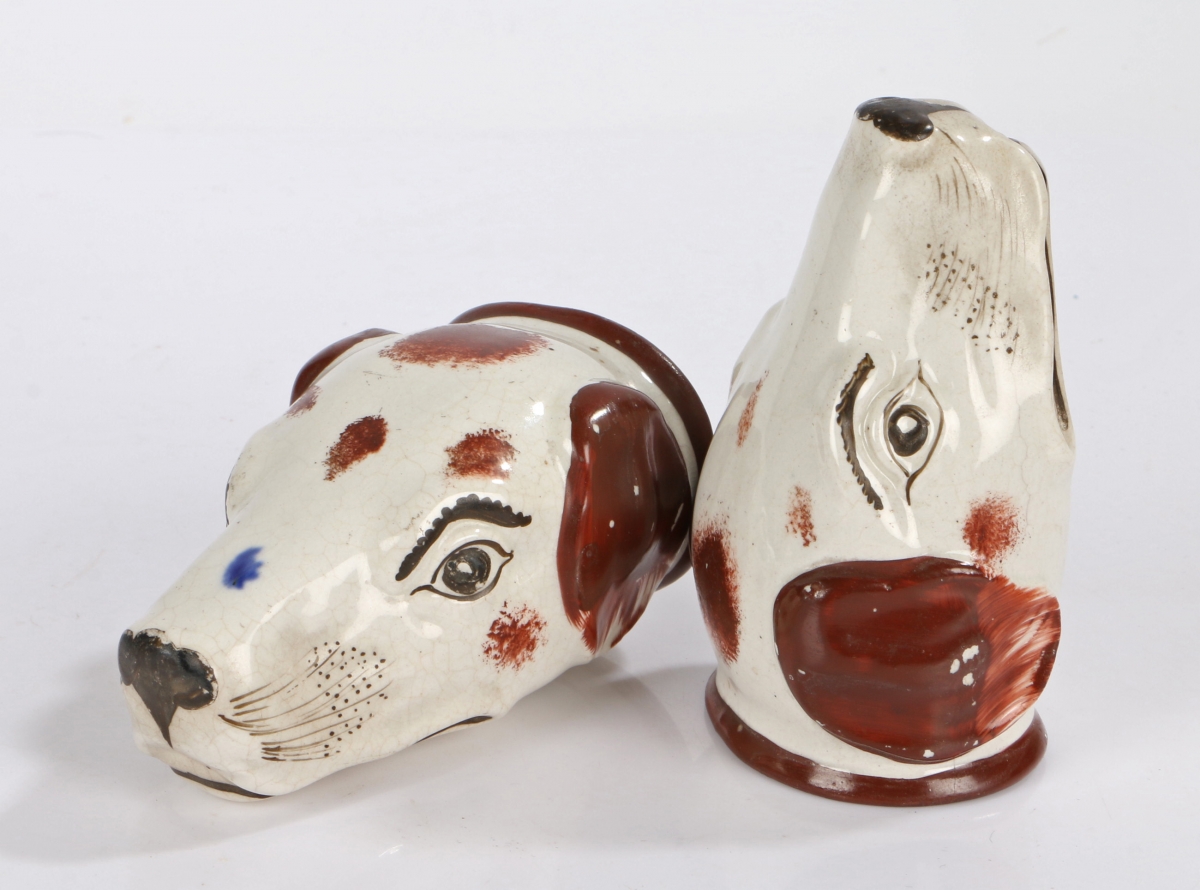 A stirrup cup is a “parting cup” given to guests, especially when they are leaving and have their feet in the stirrups. It is also the traditional drink (usually port or sherry) served at the meet, prior to a traditional foxhunt. The term can describe the cup such a drink is served in. These date back to the 18th Century and are usually in the form of a hound or fox’s head.

Bishop and Miller Auctioneers offered a pair of enamel stirrup cups in the form of hound heads made circa 1820-1830 with expectations in excess of £380. 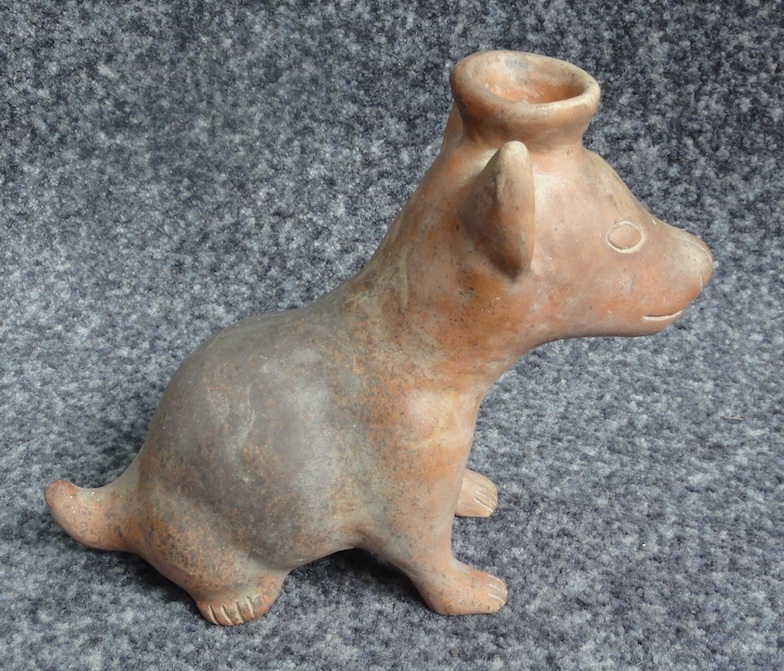 For sale at £300 in Mid Wales at Old Bakery Antiques, Sarnau is one of the oldest dog items offered for some time. It is an early representation of a Xoloitzcuintli or Mexican Hairless circa 200 BC – 300 AD, possibly from the Colima tombs. Such objects acted as guides to the underworld and food for the dead on their way to the underworld. The ceramics can be identified by their smooth, round form and warm red-brown slip, and are found in a wide range of animals.

If your taste is whimsy, you would not have needed to look further than Bonhams of Knightsbridge Jewels sale. As popular now as they were then was a range created by Cartier in the 1960s of jewels across the animal kingdom. Made specifically for daytime wearing, they raised a smile with the use of vibrant colors and cartoon-like forms.

An ideal candidate was the Dachshund, and Cartier rose to the challenge with a brooch in gold, enamel and rubies, the dog assuming a playful semi-abstract form with articulated legs that moved left and right with the motion of the wearer. With an estimate of £2,000-3,000, it took a punchy £16,000.

© Dog News. This article may not be reposted, reprinted, rewritten, excerpted or otherwise duplicated in any medium without the express written permission of the publisher.
Fri, 10/08/2021 - 7:46am