The Afghan Hound is more than just a flashy hairdo
By
M.J. Nelson

All dog breeds are wonderful to watch doing the work for which they were developed. During my years as a hunt-test judge, I particularly enjoyed watching setters with nice conformation hunt upland birds because physically they seem to flow through the field. I always considered the setters to be the epitome of elegance afoot and afield – until I had an opportunity to watch some open field coursing a few years ago.

Much to my surprise – since I expected to see mainly Greyhounds with maybe a Whippet or two in the hunt – one of the Sighthounds participating was an Afghan Hound. After watching that magnificent animal at full flat-out gallop in pursuit of a jackrabbit, I had to adjust my rating a bit. And when I did, the pretty setters afield could do no better than tie with that wonderful Afghan for first place on my personal “elegance scale.”

While the hunt didn’t provide the ultimate fulfillment for the hound, as the jack managed to escape, it did not diminish the sheer joy of watching a fine Afghan Hound do the work the breed was meant to do.

But with the right training and the right attitude from their trainer, Afghans can be more than good hunting dogs. 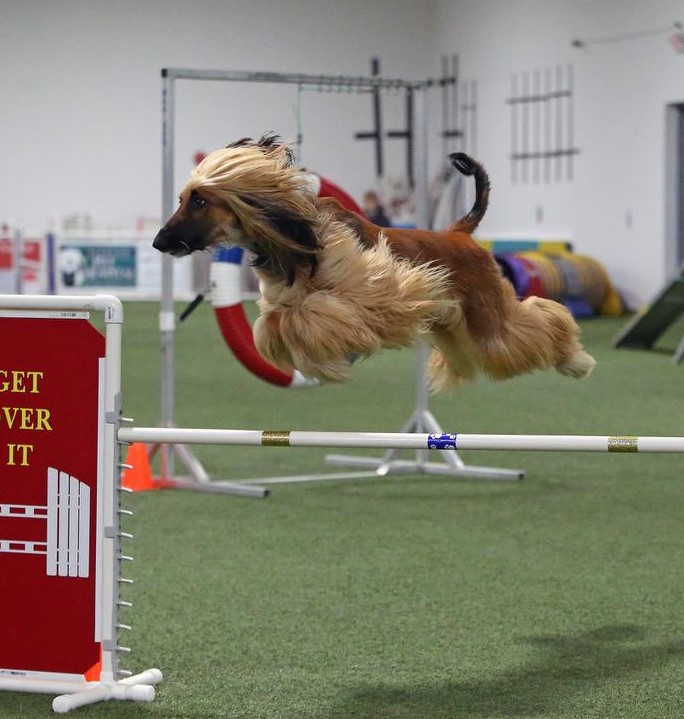 “Centuries of breeding in the harsh terrain of Afghanistan produced versatile hounds with exquisite beauty, great athleticism, robust health and intelligence,” says Dr. Cathy Kirchmeyer, who should know, as she’s enjoyed the breed for almost 70 years and owned them since she was a young woman. “They had to be smart, fierce and work independently to thrive and hunt dangerous prey, like leopards and jackals. They also were renowned for their intense loyalty to their people.”

That said, she reminds that Afghan Hounds are not always a good fit with the close, human dependent work demanded in today’s dog sports. Canine intelligence tests have been famously biased against Afghan Hounds, which often are suspicious of strangers and not motivated by food. 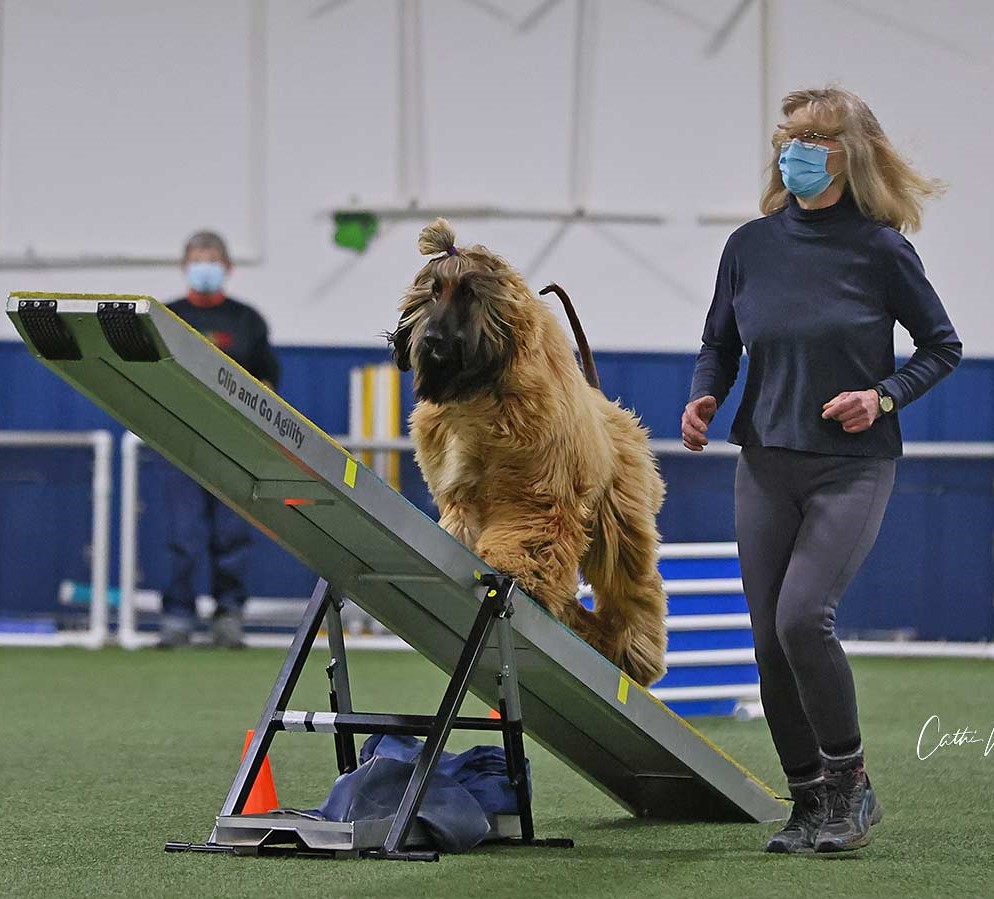 While Afghans may not be the easiest to train because of their independent nature, Sandra Frei says it can be done with patience and perseverance.

“Our dogs have participated in obedience, rally, lure coursing, agility, Fast CAT, nose work and ‘Reading with Rover’ as well as the show ring,” says Frei, who competes in those venues with Cooper (Ch. Stormhill’s Wish Upon a Star NAJ, ACT2), who is also owned by Terri Vanderzee, Patricia Silverman and Dick Hafner, and Zolton (Ch. Stormhill’s Feels Like Heaven ACT2). “Of course, as with any breed, some have excelled at different events. For me, the most difficult has been agility. They can be perfect in class for weeks.  Then when you go to a trial, there are just some days they decide to run their own course and it’s not the one specified by the judge.” 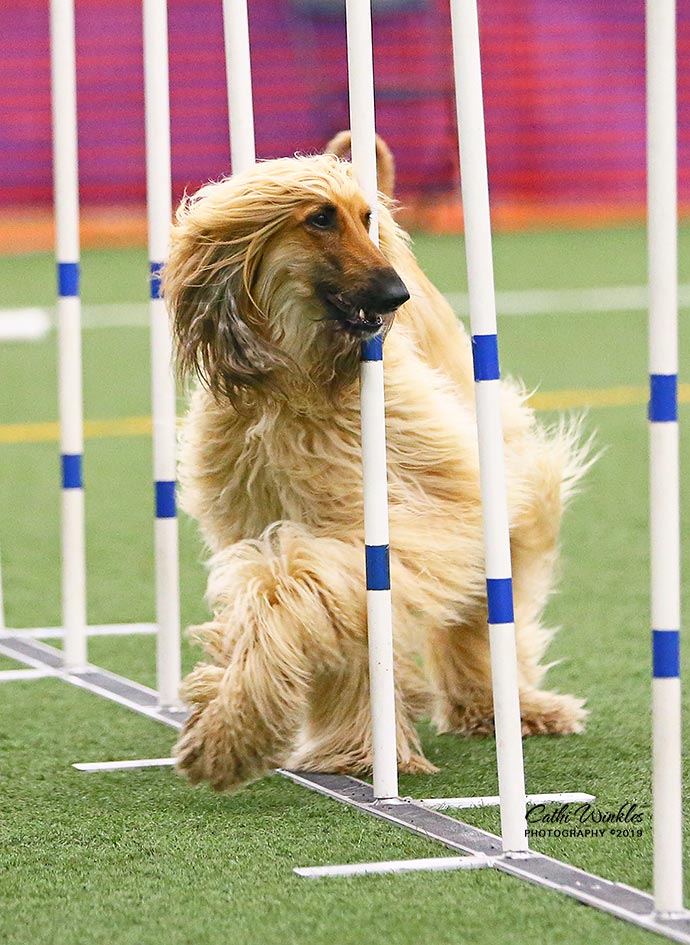 Coco (Popovs Cosmopolitan BN RE SC AX OAJ), another of Kirchmeyer’s Afghans, works through the weave poles in agility.

Frei says she has often compared the very intelligent and independent Afghan Hound to cats in that regard. “They are not the easiest breed to train, so accomplishments become extra special,” she reminds. “You have to get them on board with you and become a team. They CAN do everything, but they have to decide what they WANT to do. Training these hounds can be so fulfilling because of the extra effort it takes to reach goals.  While coursing is easy, many of the other dog sports are a challenge as each hound has its own likes and dislikes, characteristics and idiosyncrasies.”

The biggest obstacle for many Afghan Hound owners has been working with traditional trainers and traditional techniques. 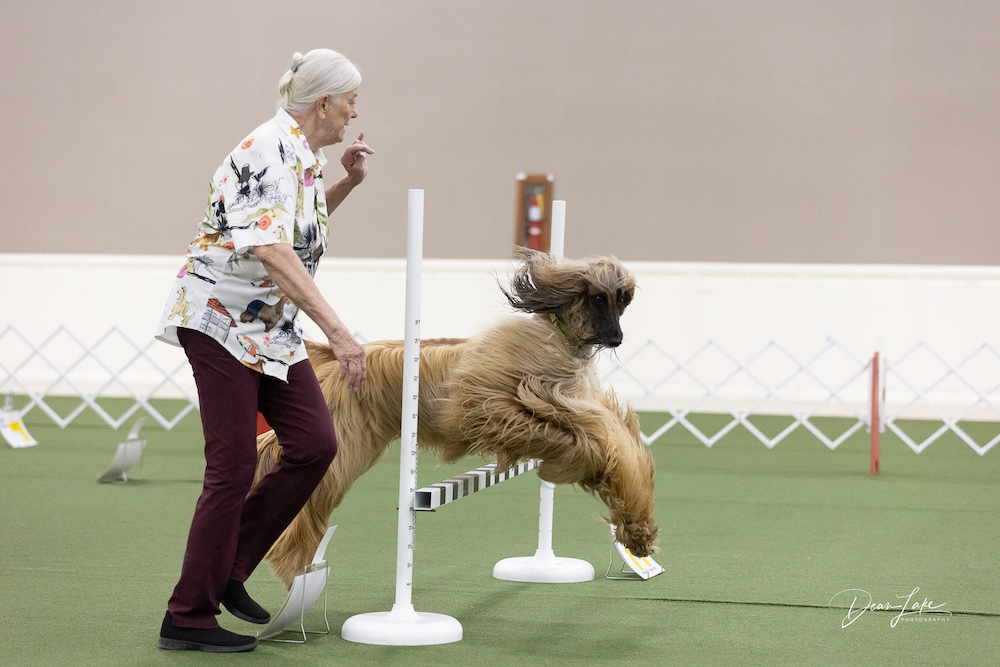 Beth Erisman-Thomas echoes the difficulty in training Afghans. “Something I’ve learned over the years is that Afghans can be harder to train than most, but it’s all due to the fact that they have to think doing something is their idea.  They aren’t Golden Retrievers that will jump just because you said to do so.  I have learned to train differently because of this. Afghans aren’t as fragile, stupid or stubborn as some make them out to be.”

She adds that what’s perceived as stubbornness in Afghans isn’t that at all. “They just use their brains in ways most of us could never imagine. For that reason, with the right kind of training, they excel in many different sports. There are a million ways to train. We do not have cookie-cutter dogs, especially in this breed. I have trained my puppy completely differently than I trained her mother. If you don’t expand your knowledge as a trainer/handler, you are doing a disservice to both yourself and your dog.” 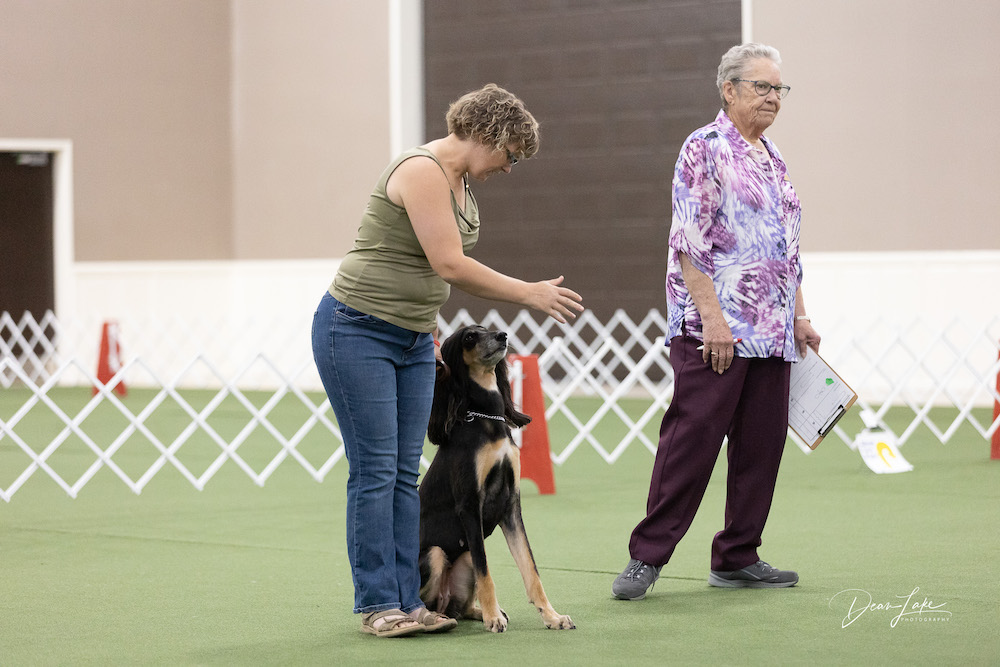 “My dogs participate in rally, obedience. Lure coursing, agility, scent work and barn hunt plus the show ring,” she says. “But I do concede that with their independent attitudes, convincing them to do something your way can be a challenge. One day they will perform perfectly and sometimes on that very same day with the same exercises, they will act like they have never done what you are asking them to do.” 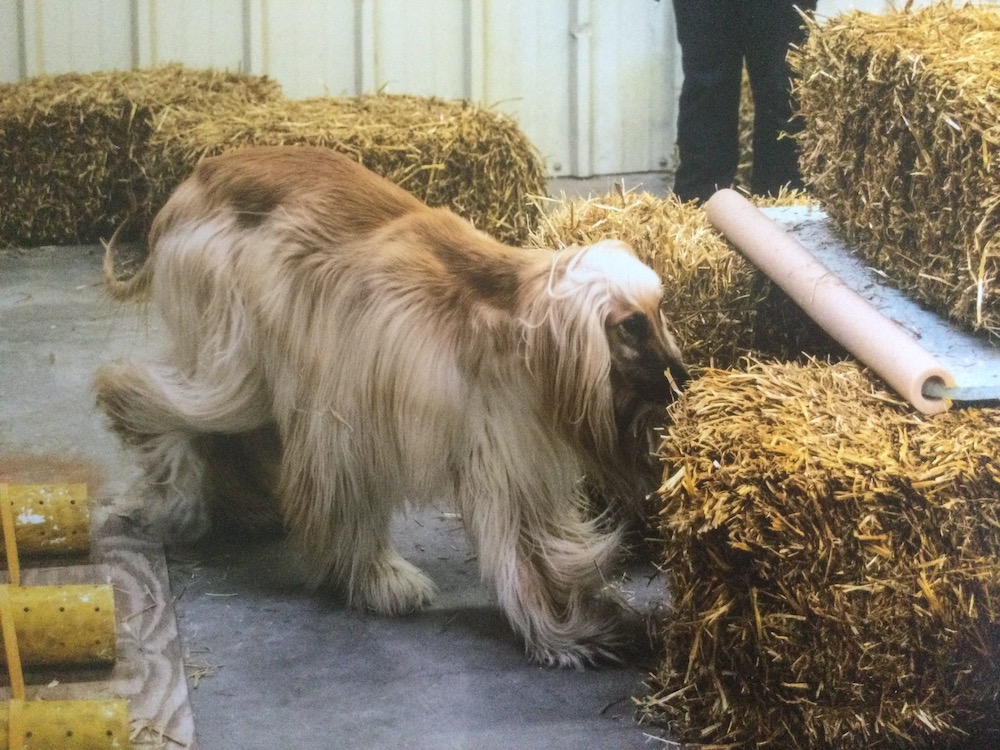 Offerman notes that most of her dogs have not been excited about obedience. “I think the amount of repetition required to master the exercises bored them and they have tended to shut down doing obedience,” she reflects. “It is a challenge to keep them focused if they’re not interested. Eventually, I recognized each dog’s limits in certain events. But my dogs love going to class, and it gives them a ‘job’ that stimulates their brains and their body.”

Finding a trainer who can be successful with an Afghan can be difficult, according to Dr. Kirchmeyer.  “All athletes, human or canine, no matter how experienced or successful, rely on trainers to help them maintain and improve performance. In reality, few dog trainers work with ancient Sighthounds or understand how these hounds think.  The best trainers I’ve found have been flexible in their approaches and have had experience with other, non-traditional agility and obedience dogs such as terriers and Malamutes.” 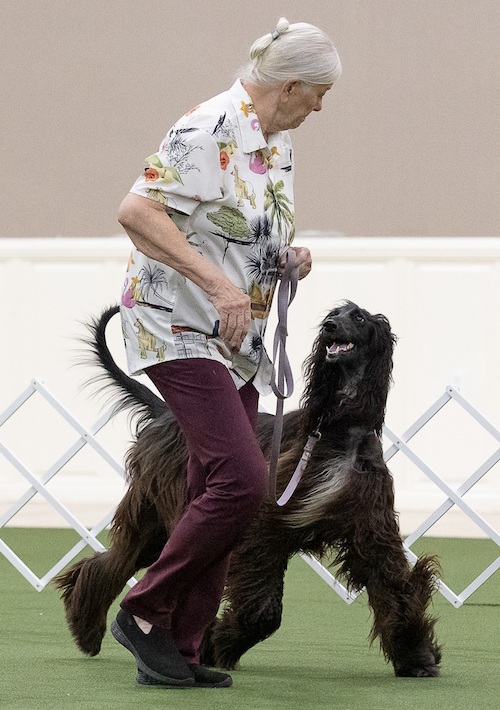 Elvira (Ch Holdwin’s Mistress of the Dark for Suni and Sumahari RI JC BCAT CGC TKN), which Hicks owns with Hans Holderman and Sue Virgo, tried her paws at obedience at the 2021 AHCA National Specialty.

Ultimately, however, Kirchmeyer thinks it’s up to the hound’s owner to decide what training approaches do and do not work for an individual dog.

“For example, training exercises where dogs are drilled and asked to repeat something over and over until they get it ‘right’ will quickly sour most Afghans,” she says. “You have to show an Afghan a new behavior a few times and then move on before you come back to that exercise at a later time.  You have to work on shaping their behavior gradually over multiple sessions rather than drilling hard.”

Kirchmeyer always brings a crate when attending class or practicing away from home. “If the exercises become too repetitive, and before my Afghan tunes out, I put him in the crate for a break.  Training a bored Afghan is never productive.  On the other hand, if my hound performs well, I tell him how great he is and return him to the crate for a treat jackpot.

“It’s also really important to allow an Afghan to be a hound,” she continues. “They are 100 percent true Sighthounds, and their passion is hunting. Luckily, living in the country my Afghans routinely encounter wildlife, and when they react, I share in their excitement telling them how wonderful they are. One problem with Afghans is that they can be easily distracted by the goings on in and outside the ring. Experience and maturity usually help build focus, but Coco, who is five, when in new settings still has to visit the ring crew and investigate the ring periphery before she can settle down to work.”

One difficulty Hicks sees consistently, both with her dogs and those of others, is retrieving the dog after a lure-coursing run is complete. To solve the problem, she has developed a very “Pavlovian” system with a small squeaker toy that seems to do the job most of the time.

“In a small, confined area, with the toy in my pocket, I squeak it and then treat, doing this multiple times any time the dog looks away. Once that behavior is solid, I repeat it in larger and larger areas. Once I’ve accomplished consistent responses at a distance, finally I add distractions.” This can take some time, with multiple short training sessions, “but eventually, when I squeak the toy, which is always hidden in my pocket, after the lure stops, the dog’s ‘automatic’ response is to come to me.” 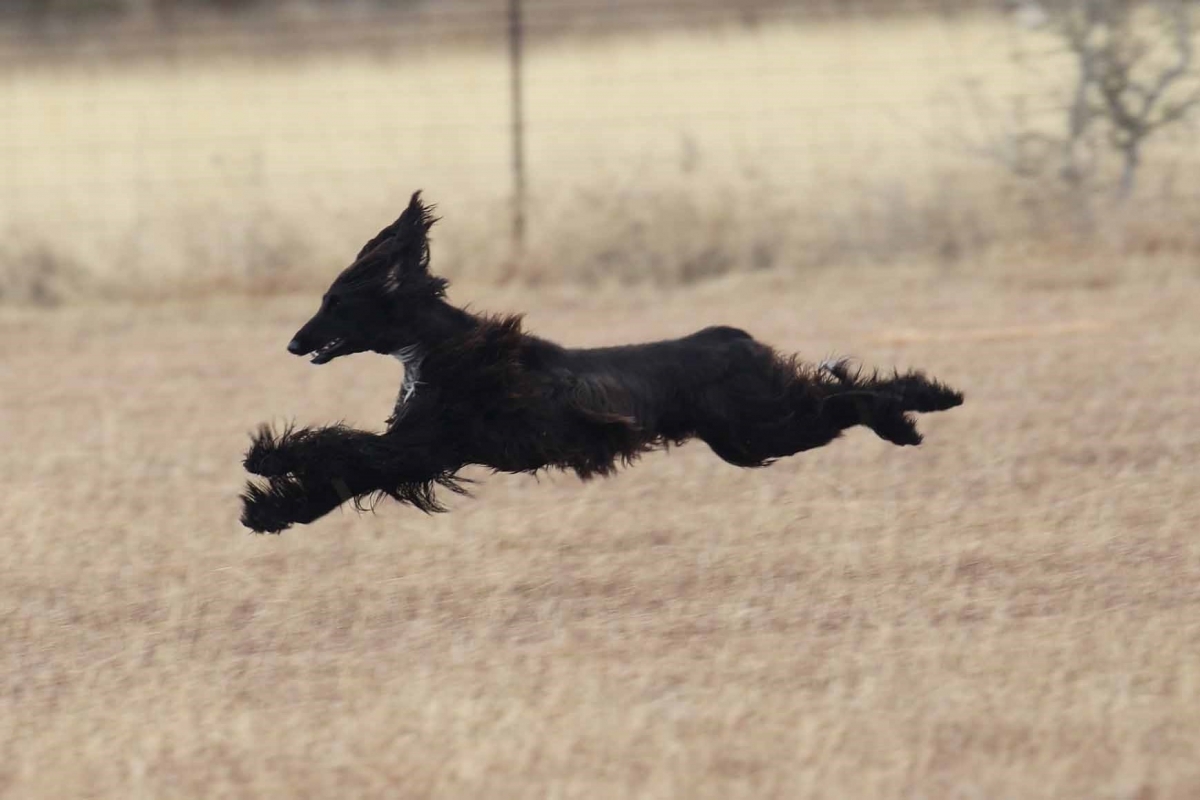 Another problem Hicks encounters with her high-drive dogs is their refusal to relinquish the lure when it stops. “I solve this in a similar manner,” she explains. “I play with a toy, usually a rabbit skin, and when they glom onto it, I give them a ‘give’ command to let go for a treat. Often, at first, I’ve had to physically pry their jaws apart to remove the toy, but eventually they get the idea. However, this is a bit more difficult to train out because you’re going against their natural instincts.”

One of the major issues facing the breed, according to Erisman-Thomas, is ensuring that top-winning Afghans in the show ring have the ability to successfully lure-course. “It’s one thing to be pretty trotting around a ring, but it’s another to be able to do what the breed was meant to do. We cannot preserve the past and improve the future without retaining the ability to course.”

Another issue is declining numbers, Frei adds. “Because of their independent nature, Afghans aren’t the breed for everyone. While they do make good house dogs, they also require a big yard to run in and a covered area for bad weather. Their coat care takes time, and they’re a large breed. As a result, we’re seeing fewer and fewer Afghan breeders.  I live in the state of Washington, and we had no litters whelped in our area during the pandemic. Also, there are not a lot of new people coming into the breed. All of these issues are worrisome.”

Offerman agrees. “Breeders are not producing as many litters and new people are not choosing Afghans as their breed,” she says. “This is probably due to the perceived difficulty with coat care and the fact that they cannot be allowed to run free. They need a fenced yard or be kept on a leash. Adding to these ‘negatives’ is that they are not easy to train.”

Hicks adds that breeding dogs has changed a lot in the 50 years since she started with the breed. “Now, most people in this country can only keep a very limited number of dogs, and responsible breeders generally breed only a limited number of times. As a result, we’re seeing dwindling numbers and diminishing genetic resources. This problem is exacerbated by high volume ‘breeders’ who breed indiscriminately, generally do not health-test their animals, advertise on national and local websites, and don’t properly vet puppy buyers. They’ll sell to anyone who has the sale price. These people flood the pet market, making things even more difficult for responsible breeders to place pets.”

© Dog News. This article may not be reposted, reprinted, rewritten, excerpted or otherwise duplicated in any medium without the express written permission of the publisher.
Fri, 11/12/2021 - 5:14pm