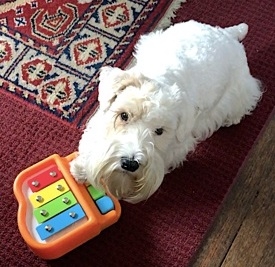 This Sealy has found a niche she likes in trick work. She’s quite adept, for a dog, at piano playing.

The Most Biddable Terrier

Sealyhams are little dogs with a big working spirit
By
M.J. Nelson

It is not often that the words “biddable and “terrier” appear in the same sentence. But when the terrier in question is the Sealyham, it’s not as surprising, as the Sealyham is considered quite probably the easiest terrier breed to train.

“They are tenacious ‘lit’l BIG dogs’ with an incredible working spirit. They are also natural comedians, constantly ‘stirring the pot’ and providing a sense of levity for anyone who has ever been owned by or met one,” says Bev Thompson, who should know: She has had Sealyhams for 30 years and is currently “owned by” Pip-pa (Goodspice Full of the Dickens JE CA DCAT SWN SHDN RATO TKP CGC).

“They have a funny attitude toward life that I love, they are eager to try new things and they are very intelligent,” says Bobbi Salmon, whose current dog is Leah (Ch Bonney Diamonds Are a Girls Best Friend JE SCN SBN). “What’s more, they were developed to hunt so they are right at home in dog sports such as earthdog, scent work and barn hunt, all of which let them use their instincts to find and identify objects and animals. They also love to run and are fearless, which makes them a good fit in agility plus satisfying their need to run. And they are really smart, so identifying obstacles comes easy for them.”

Sealyhams have fine nose skills and are generally very athletic. This often surprises people, according to Lisa Moller, who owns Harry (Cibach Come Fly With Me RATI RATO TKN).

“One of the earliest proponents of the Sealyham, Sir Jocelyn Lucas, was a serious huntsman and the breed impressed him with its intelligence, toughness and diverse hunting abilities,” she explains. “I think those qualities often shine though today in Sealyham Terriers seen in field and dog sports. They perform well in agility and their high degree of intelligence makes them naturals in both obedience and rally in addition to their obvious skills in scent work, earthdog and barn hunt.”

The breed dates back to around the mid-1800s, or so it is believed. The man credited with developing the breed, Captain John Edwardes, kept no records, but a student of Welsh dog breeds surmised that the original foundation for the Sealyham Terrier, named for Edwardes’ estate in Wales, were probably descendants of white-haired terriers that Edwardes’ Flemish ancestors brought to Wales about the time of the Norman Conquest. The best guess is that he added a small white terrier, now extinct, that resembled a bull terrier, the Dandie Dinmont Terrier and the West Highland White Terrier to the mix to create the Sealyham. He wanted a small white dog with a strong jaw and a wiry coat. The white coat was important because Edwardes used the breed for pest control, hunting small game and eliminating vermin, particularly badgers, which he usually relocated. The white coat allowed hunters and their hounds to differentiate between the Sealyham and its quarry when the dog came out of the ground.

Salmon says she loves doing earthdog with Leah. “She’s a great ratter and mouser. In fact, she was responsible for finding several mice in my old house. Earthdog allows them to do what they were bred to do – go to ground and find prey. Barn hunt is also a good fit for a Sealyham because it gives them an opportunity to find prey. My main problem with Leah in earthdog has been finding trials. I live in New Mexico now and need to travel six hours to Colorado to find trials.” 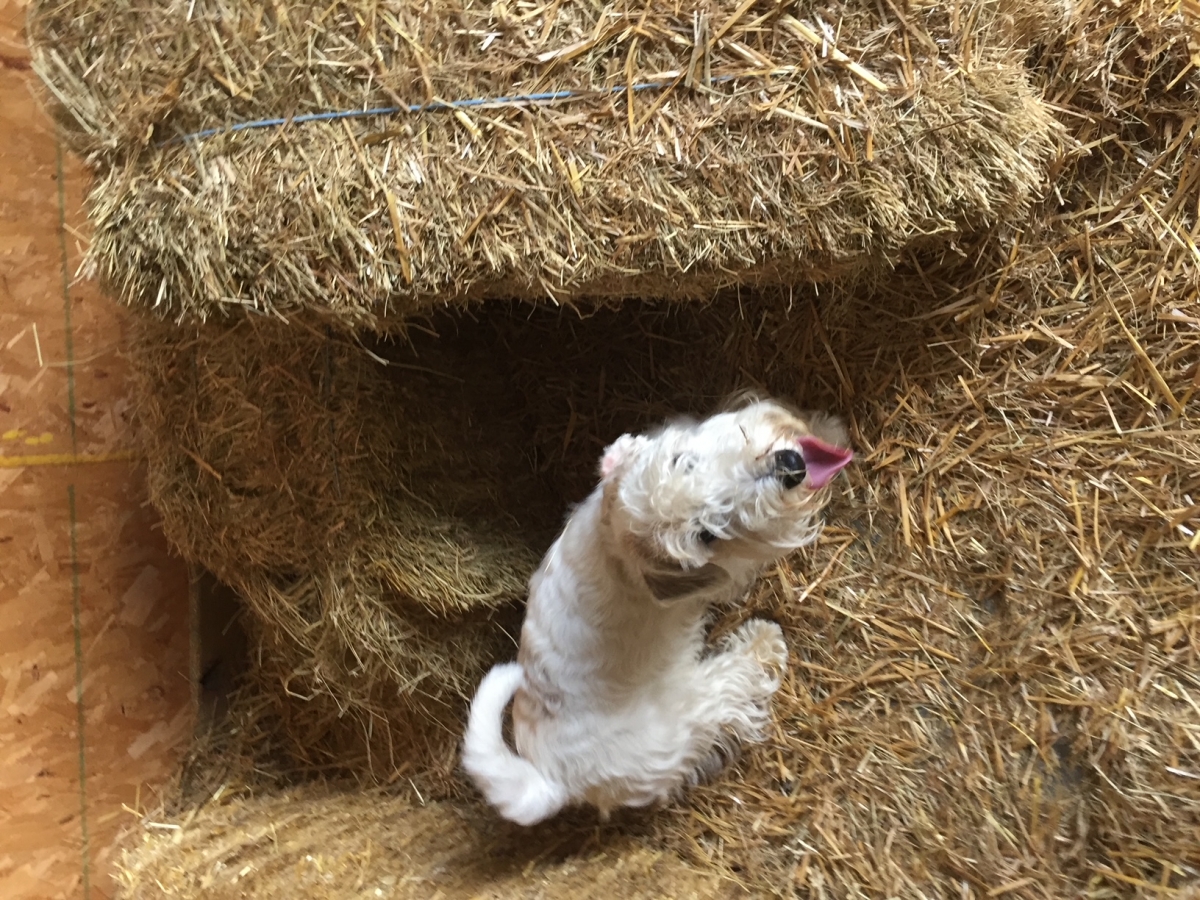 There's a rat in there somewhere.

Salmon adds that her dog likes to play games in scent work. “She knows she gets treats when she identifies a scent, so she will often indicate an article where there is no scent, hoping for a treat. Usually that only happens once and then she settles down to working correctly. She also struggles with the birch scent for some reason, and so will sometimes miss it. She loves being able to get out and work, however, no matter what sport we are doing. I think part of that love is the sport itself and part of it is the social nature of the trials. Certainly doing dog sports with my dogs has let me form stronger bonds with them.”

Thompson says that Sealys are much more sensitive than people might think a Terrier would be.

“If you correct a Sealy too harshly or if they get bored with a repetitive task, they may shut down,” she says. “When Pip-pa seems confused or frustrated with her attempts in any performance sport, I take a step back. I don’t want to put her in a position where she’s likely to fail. You also have to keep in mind that if you don’t think your Sealy can succeed at a performance trial, they probably won’t because they’re really quite sensitive, especially being terriers.”

If one of Thompson’s dogs seems to be getting tired of a sport, she takes a break. “That usually works,” she says. “Participating in trials has certainly made Pip-pa more focused on me and the job she is trying to accomplish. Her true temperament has come out, and she has developed a disposition that is a joy to be around with other dogs and humans. She’s a welcome houseguest anywhere. She’s currently doing senior earthdog and is a speed demon in FastCAT, as she loves chasing the plastic bunny. She’d probably be a lot faster if she didn’t talk about it the whole 100 yards to the finish line.” 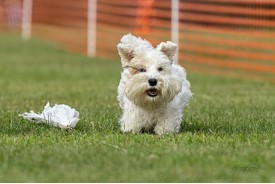 Pip-pa (Goodspice Full of the Dickens JE CA DCAT SWN SHDN RATO TKP CGC), Bev Thompson’s current Sealyham Terrier, would have better times in Fast-CAT if she didn’t have to talk about it for the entire 100 yards of the run, according to her owner.

Moller notes that Sealyhams are still terriers and as such, can be stubborn.

“Sometimes a smart dog that is also stubborn will make up their own mind when they’re finished training or performing for the day. Fortunately, that’s temporary, and they’re happy to go back to work the next day. Active dogs are less likely to suffer from boredom and its resulting behavior problems.”

Moller thinks one of the surprising benefits of the various pandemic restrictions has been the AKC’s development of the series “Titles You Can Do From Home with Your Dog.”

“This is useful for people who can’t easily travel but like to train and for us, it’s been great,” she says. “One problem I have had with Harry is that he didn’t like FastCAT at first asking. I found that’s not uncommon as it’s often confusing the first time for dogs. Since he runs like the wind, we’ll just try it again.”

For Salmon and Leah, a major issue occurred with earthdog. “Leah decided at our last earthdog event that it was more fun to hunt above ground than go in the tunnels to find the rat,” Salmon recalls. “We think she was searching for a rabbit nest. Unfortunately, I didn’t have the time to figure out how to solve this problem, so we’ll have to wait until our next trial to see if she will go to ground.” 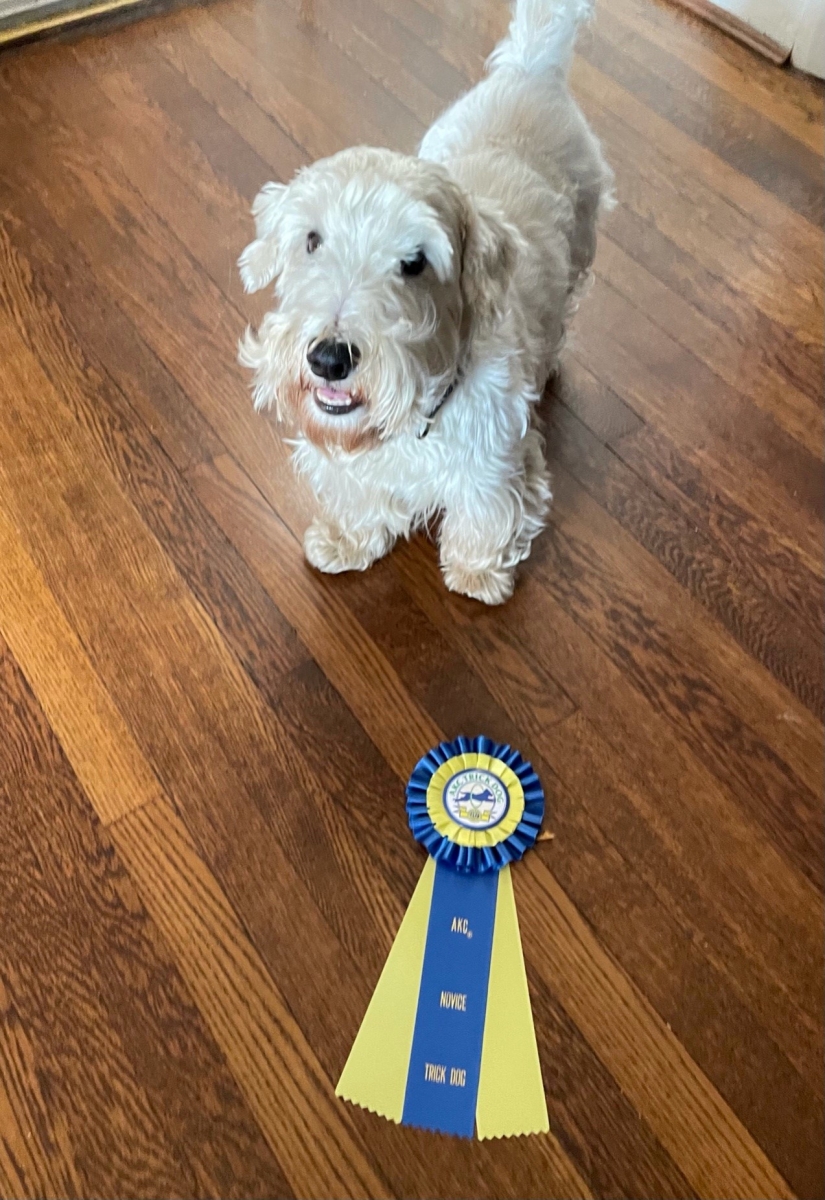 Harry (Cibach Come Fly With Me RATI RATO TKN), Lisa Moller’s Sealyham Terrier, is another who has found trick work to be fun.

Thompson says that although Sealyham Terriers need variety in their work to keep boredom at bay, too much variety can be confusing. “Pip-pa experienced some confusion and frustration doing barn hunt, scent work and earthdog at the same time. Since she is at the advanced level in all three, I’m currently doing only scent work with her and she’s soon ready to do excellent scent work searches.”

Although a celebrity and favorite of royalty in the 1930s, Sealyham Terriers today are a very rare breed indeed, sitting in the 148th spot on the AKC’s 2020 list of 195 breeds ranked by popularity. Only four other Terrier breeds – Glen of Imaal, Dandie Dinmont, Skye and Cesky Terriers – are rarer than the Sealyham.

Those small numbers are a concern for Sealyham fanciers. “There are so few Sealyhams, we need to be careful they don’t become an extinct breed,” Salmon says. “While our numbers are increasing, more people knowing about the breed and falling in love with them is necessary for the breed’s survival.”

“I think our greatest challenge is understanding what Sealys were initially bred to do and allowing them every opportunity to show their terrier nature,” Thompson adds. “It’s really important to keep them safe as a rare breed so they don’t become extinct and do not fall into the hands of anyone who does not promote the very best health, lineage, temperament and well-being of these wonderful little dogs.”

© Dog News. This article may not be reposted, reprinted, rewritten, excerpted or otherwise duplicated in any medium without the express written permission of the publisher.
Sat, 12/11/2021 - 10:10pm