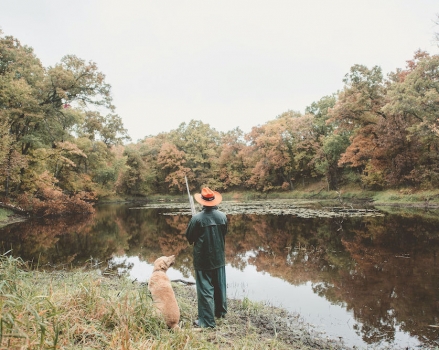 Direct from the manual: Any time meals aren’t being served is nap time, unless someone offers to go shoot birds for you. (Krista Smude, photo)

Somewhere there has to be one. And the dogs must actually know what’s in it
By
M.J. Nelson

Somewhere there has to be an owner’s manual for dogs. And, unlike me when some new bit of equipment enters my life, the dogs must actually know what’s in that manual.

My excuse is that a lot of those manuals are poorly written and, in the case of items manufactured overseas, written by someone with a shaky command of English. I also figure there are better uses for my time than trying to understand a set of complicated instructions for something that, at least on the surface, appears pretty simple to operate. It’s not until I discover that what looked easy to do was way more complicated than it seemed that I’ll deign to look at the manual.

Clearly the dogs don’t have that aversion. Maybe their manual is more easily understood than the ones that come with my items, or maybe it’s just passed down from generation to generation as something they instinctively know. Either way, they obviously have a better command of how to make humans work for their benefit than I usually do with a new piece of equipment or tool.

I’d bet that the manual has a set of operating instructions that begins with something like a military warning order – which is given so the dogs have the maximum time to prepare for the mission – that it’s imperative to keep in mind that people often need a lot of coaching. What’s more, they are often seriously impaired when required to understand what dogs are telling them. So a dog has to be very patient with an owner and also be prepared to repeat lessons over and over until the owner can finally grasp what the dog is trying to teach them.

1. What’s under the main heading, “Operating Your Person”? It likely begins with you’ll have to teach them “Let me out” and “Feed me.” Those two commands are of primary importance. “Get out of my chair” or “Get off my couch” will have to wait until later, once they’ve grasped some of the nuances of dog communication. Once they are ready for these lessons, it is important not to get belligerent about your right to either the couch or the chair. Subtlety is the best policy. The easiest way to get this point across is simply to beat them to the chair or the couch and take possession of it by sprawling out so there’s no room for anyone but you. Failing that, it is always effective to jump up into the chair or onto the couch and simply push and lean on them until they get up and move. 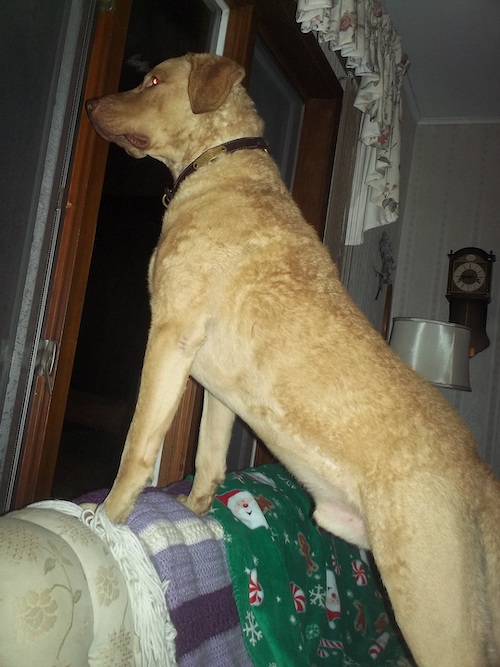 2. The next subhead reads: You are the department of home security. It is your job to guard the house against all enemies. You have to impress upon people that they can absolutely trust you to be on sentry duty at all times, and you will ensure that the house and its contents, human or otherwise, remain safe. You can demonstrate your alertness by jumping up on the nearest piece of furniture and peering out the window whenever you hear any strange noises outdoors.

3. If a person gets up at night for any reason, it is your duty to move into the area vacated by that individual and keep it warm for their return. Unless they are total ingrates, they will then let you spend the night atop the three inches of memory foam that covers the bed. You may have to insist a few times after you have performed this vital service, but eventually they’ll get the message. 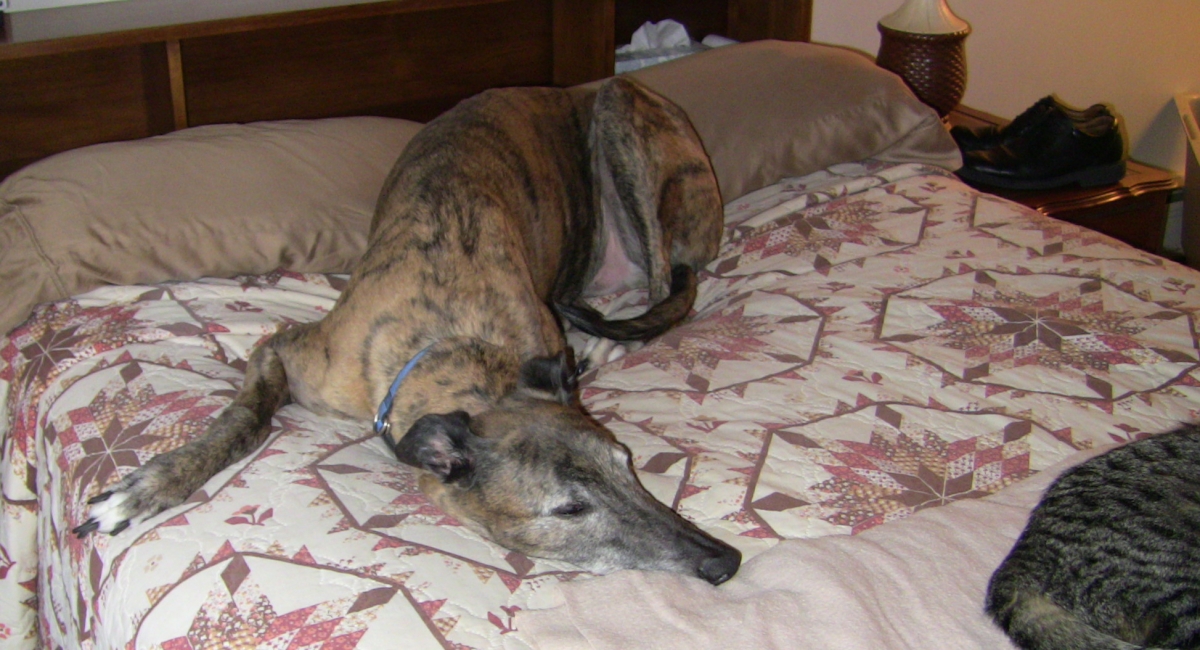 If a person gets up at night for any reason, it is your duty to move into the area vacated by that individual and keep it warm for their return.

4. The small people, hereafter called “children,” have to learn that when they are eating, at least half their food will be dropped and while it is still warm. Every snack they make, every meal they eat, every bite they take, they must share with you, and you may have to stare at them until they understand this rule.

5. Days are divided into two important sections: breakfast/supper and everything else. Any time when meals aren’t being served is nap time, unless someone offers to go out and throw bumpers or, better still, shoot birds for you if you are a sporting breed. For the hounds that would be someone going out with you to chase rabbits; for the terriers, to hunt rodents; for herding dogs, to chase sheep/goats/cattle or even ducks, or for any dog to chase anything including a plastic bag. All of these activities take priority over napping or even meals. 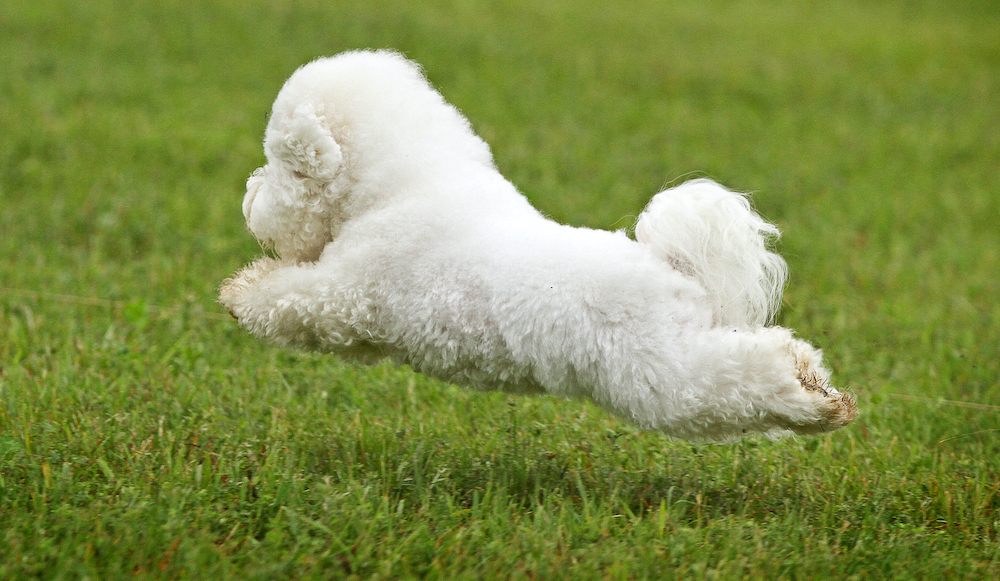 Naps must be rescheduled if the opportunity arises to chase anything, including a plastic bag.

6. Children stand at optimal petting height. But you have to stand close to them to ensure good petting. If they run, they are excellent to chase, and if they fall down, they are comfortable to sit on.  If they sit down or stand very close to your head, they are asking for kisses from you. Small children also need to be quickly taught that although you are as tall as they are, and you stand on four legs and are covered with soft hair, you are NOT a pony. Pulling them around in a cart, however, is an entirely different matter.

7. You are entitled to practice your nose art on all glass doors and windows. If people complain, they are to be pitied because they simply do not understand or appreciate the beauty of classic nose art. Why, not even their greatest abstract painters – Picasso, Cezanne, Matisse, Pollock – could devise the beautiful and intricate patterns a dog can create with your nose.

8. If a person pretends to throw your toy for you but really hides it behind their back, punish them for committing this fraud.  The same is true if they talk baby-talk to you. If either happens, turn your back on them and walk away. While baby talk may have been okay when you were a baby puppy, baby talk to a grown dog is insulting.

9. If a person asks you what you are thinking, if you really could tell them, a lot of the joy would go out of your relationship with them. This is one instance where silence truly is golden.

10. Thunderstorms are a signal that the apocalypse is upon us, and most people don’t appreciate the true nature of thunderstorms, saying that it’s just noise. But you know better, so it is imperative to warn them by shaking, panting, eye-rolling and sitting in their lap until they acknowledge the grave danger that they and you are facing. 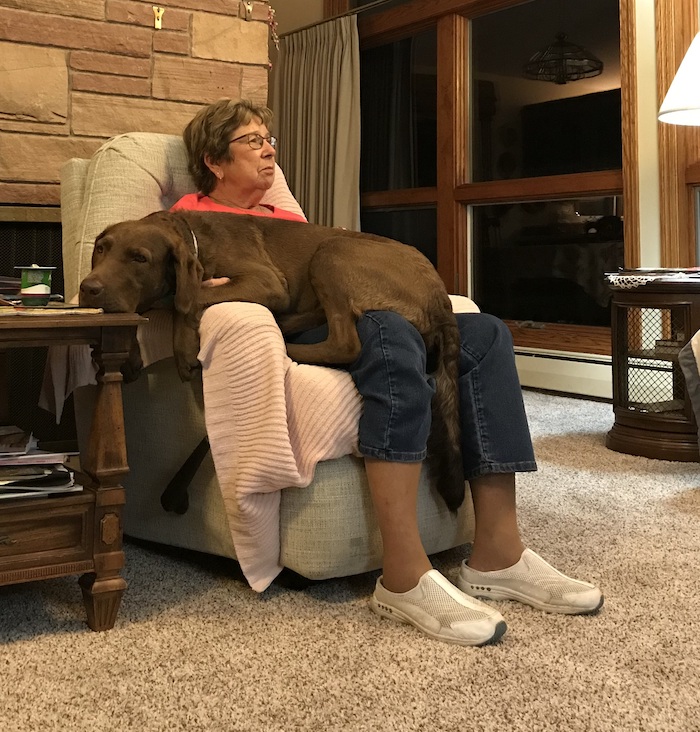 Thunderstorms are a sign the apocalypse is upon us, so it is imperative to warn people by shaking, panting, eye-rolling and sitting in their lap until they acknowledge the grave danger that you both are facing.

11. People frequently don’t understand that playing squirrel or tug or fetch with you is necessary for their mental health, so you’ll need to frequently remind them. Dropping toys in their laps until they understand that they’re really the ones who need a play break is usually pretty effective.

People frequently don’t understand that playing squirrel or tug or fetch with you is necessary for their mental health so you’ll need to frequently remind them.

12. Wastebaskets are toys filled with paper, orange rinds, candy wrappers and used cups, including some with the remains of adult beverages. You should be wary of the latter, as they can cause you to be undignified. Wastebaskets were meant to be overturned and the contents scattered around the house and played with. The reason you must do this is because people don’t get nearly enough exercise for good health, and it is part of a dog’s job to remedy this shortcoming.

13. Supper dishes do not fill themselves. Occasionally people need to be reminded of this issue. If a nose poke doesn’t work, picking up the dish, standing in front of them and awrrrring usually is effective. If they still don’t get the hint, dropping the dish on their foot almost always gets their attention and creates the required dish-filling action.

14. A sandwich or a person’s evening meal, if left within your reach and is not actually in the person’s possession, has clearly been abandoned, which means it’s yours. If the person who formerly owned that sandwich or evening meal takes issue with that conclusion, remember that possession is nine-tenths of the law. This means that the sandwich or dinner you are currently eating is presumed to be yours unless the person can provide irrefutable proof that it is not. If you have already swallowed said sandwich or dinner, that necessary proof becomes impossible to obtain.

15. One thing you must impress upon people is that there are only three food groups for dogs – in your dish, off the table/counter and on the floor. Also, that you have a duty to sing along with all television theme songs, and they are not to interfere with this duty. Furthermore, if they bring a tree into the house, they have issued an invitation to put your ownership brand on the tree. 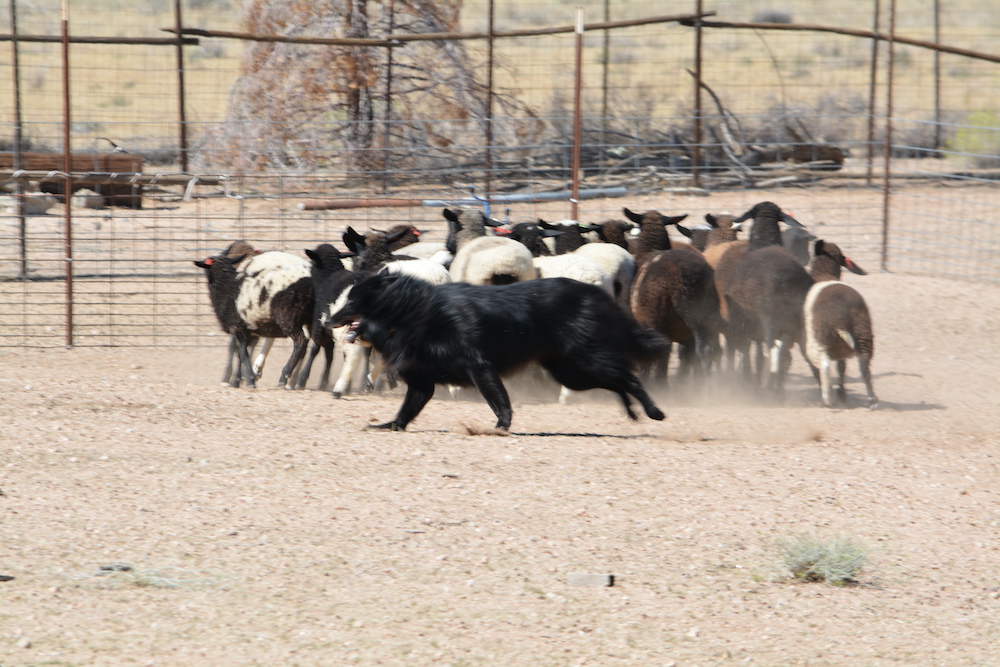 Naps will have to be delayed if the opportunity arises to tell sheep where to go.

16. Baths are a particularly unwelcome intrusion in a dog’s life, although they are necessary for your overall good health and comfort, as they relieve the itching that results from mud baths that have dried on your coat, and once you’ve dried off after a bath, they encourage people to increase how much and how long they pet you. But baths also provide people with an excellent opportunity to clean up the floor and the walls. So it is a dog’s duty to help them in this chore by shaking as vigorously and often as possible during the bathing process.

17. It is imperative to refuse to eat any food that was on sale at the pet store or the supermarket. Even if this sale food is your regular brand, you must assume there is something seriously wrong with it and eating it would be injurious to your health. However, any food on the floor is not only fair game but usually pretty tasty, so it is important to never leave the kitchen when a person is cooking and always make sure you are lying on the most awkward place on the floor. Be wary, though, of certain vegetables that may be dropped during food preparation, such as lettuce, broccoli, cauliflower, radishes or pickles. If you accidentally put one of these in your mouth, they are to be spit out instantly, as swallowing them could result in digestive distress.

18. Always keep in mind that people like to think of dogs as animals in need of a leader. They’re dead wrong! They are the ones who will end up running their life according to your needs.

Nap time will have to wait if you are invited to hunt rodents.

While you aren’t a pony, you can be persuaded to pull small children in a cart.

The easiest way to get your point across is simply to beat them to the chair or the couch and take possession of it by sprawling out so there’s no room for anyone but you.

© Dog News. This article may not be reposted, reprinted, rewritten, excerpted or otherwise duplicated in any medium without the express written permission of the publisher.
Wed, 06/02/2021 - 2:15pm