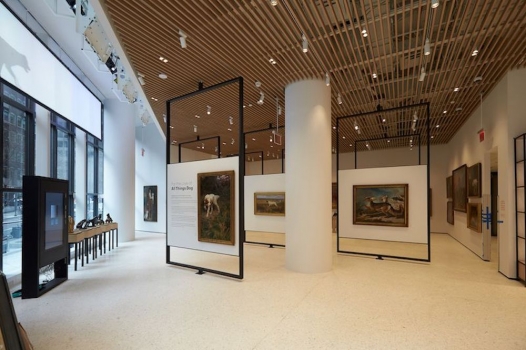 Second Chances: The AKC Museum of the Dog

In the past these pages have not always been sanguine about some of the American Kennel Club’s income-generating business forays. While on paper they might have looked related, in truth there were some big-budget money losers that included expensive hired employees and product-investment monies that didn't pan out.

But the American Kennel Club has invested in some areas that should and must be applauded. High on that list is the American Kennel Club Museum of the Dog. The Museum has had several fits and starts in the past that created some negative press. Some were hesitant to donate artwork in the past, but now that the museum is on sure footing those concerns are no longer valid. Treated for many years as a long-lost relative, that has all changed. Thanks to the hard and long-fought work of CEO and president Dennis Sprung, the Museum of 2021 is becoming what the founders originally planned. When it’s all said and done, Dennis’ greatest achievement as president of the American Kennel Club will be his dogged determination to bring the museum back to New York, creating a permanent accessible location to house the history and artworks of all dogs. Lots of time and money went into this project, which will live on years after all who read this are gone. Museums are a visual history of life from the past into the future, and it is incumbent of us to help grow and nourish so that it stays relevant and informational for generations to come.

In just the few years since the museum’s move back to New York, support and interest from us in the fancy have grown. When we visit, we view the fabulous collection of art to which we and others have contributed, walls filled with the works of Arthur Wardle, Maude Earl, Edward Landseer and John Emms. So as you look at the dog art that you have collected over the years, consider bequeathing some to the Dog Museum. The Dennis Springer bronzes, the Terry Chacon and Heidi Martin paintings will be even more collectible than they are now. Not to mention they add an extra bit of history as these artists painted and created art of top-winning dogs, which adds to their cache.

Interrupted by the pandemic, the Museum is now once again open and waiting for you to visit. So think of the American Kennel Club Museum of the Dog as it is today; become a member and give it a second chance.

© Dog News. This article may not be reposted, reprinted, rewritten, excerpted or otherwise duplicated in any medium without the express written permission of the publisher.
Tue, 08/10/2021 - 9:47am