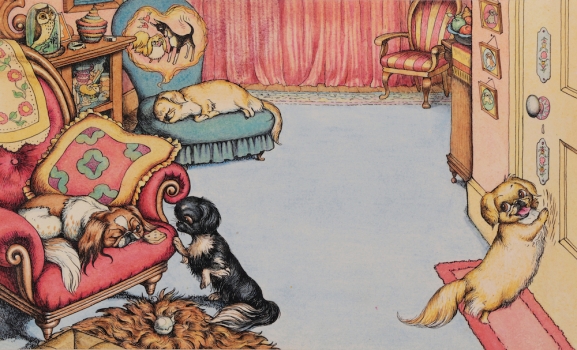 A Plethora of Pekes

A series of sales offers Pekingese artwork
By
Nick Waters

When waiting for something to happen and suddenly everything does, there’s a saying in England to the effect that it’s a bit like London buses: You wait forever for one to come along then suddenly three or four all appear at once. So it seems at times in art, and in this instance the Pekingese.

HotLotz in Singapore sold items from the collection of Quek Kiok Lee (1921-2018), Singaporean businessman, banker, entrepreneur and investor, a founder of the Southeast Asian Ceramic Society and Acquisitions Advisor on Chinese Antiquities for the National University of Singapore.

In his free time, he met with collectors and dealers of Chinese works of art from around the world, read and researched to build up his knowledge and became well known to the leading auction houses and authorities because of his encyclopaedic knowledge and his increasingly impressive collection of Chinese art. Mr Quek was more than just a collector, he meticulously researched every piece he bought and kept detailed records.

Against an estimate of SGD300-500, a mid-20th century inscribed Yixing pottery cylindrical teapot decorated with Pekingese playing to one side and calligraphy to the other, found a new home for a multi estimate SGD7,000. 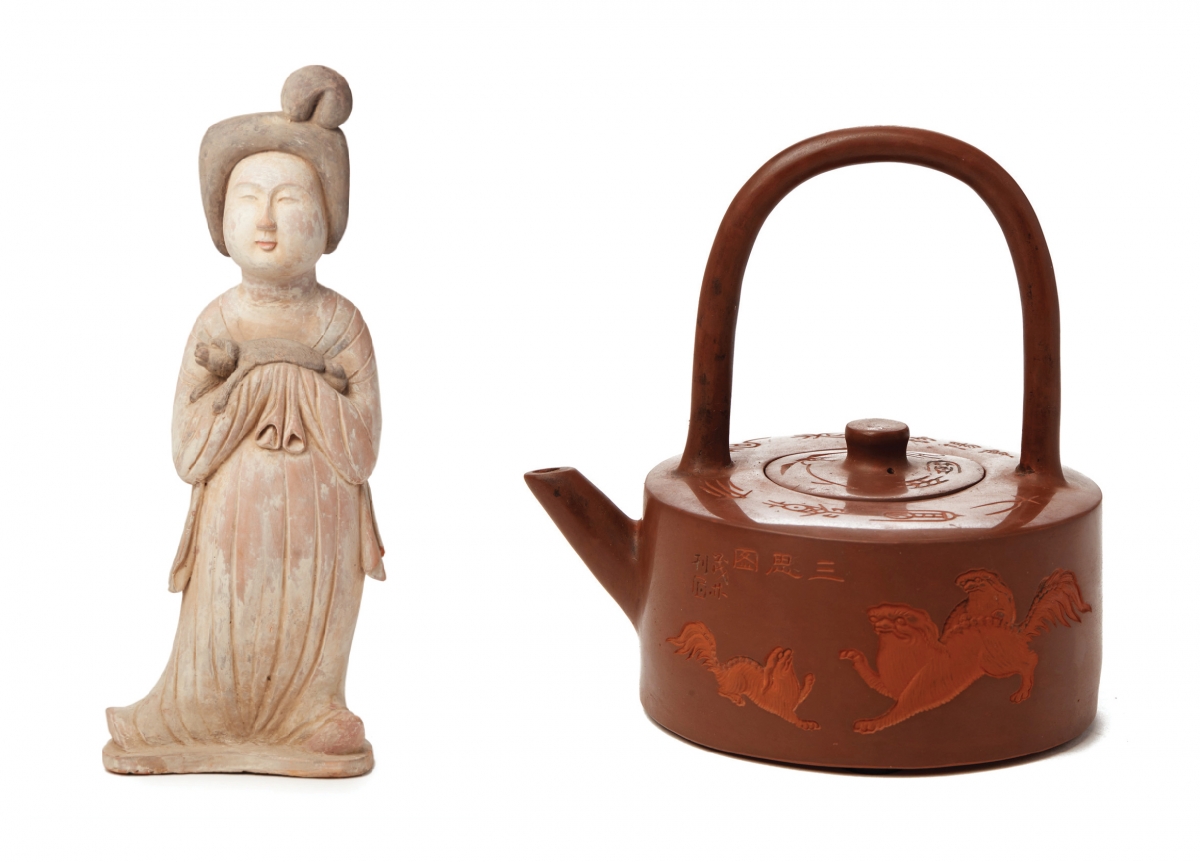 Also in the sale and with a tenuous link to Pekingese was a Tang Dynasty (AD619-907) large painted pottery figure of a court lady with a dog that went for SGD4,000. The little dog the lady was clutching in her arms had a rounded head, truncated muzzle and feathered tail and could well have been a forerunner of the little dogs in the Chinese court some countless decades later. 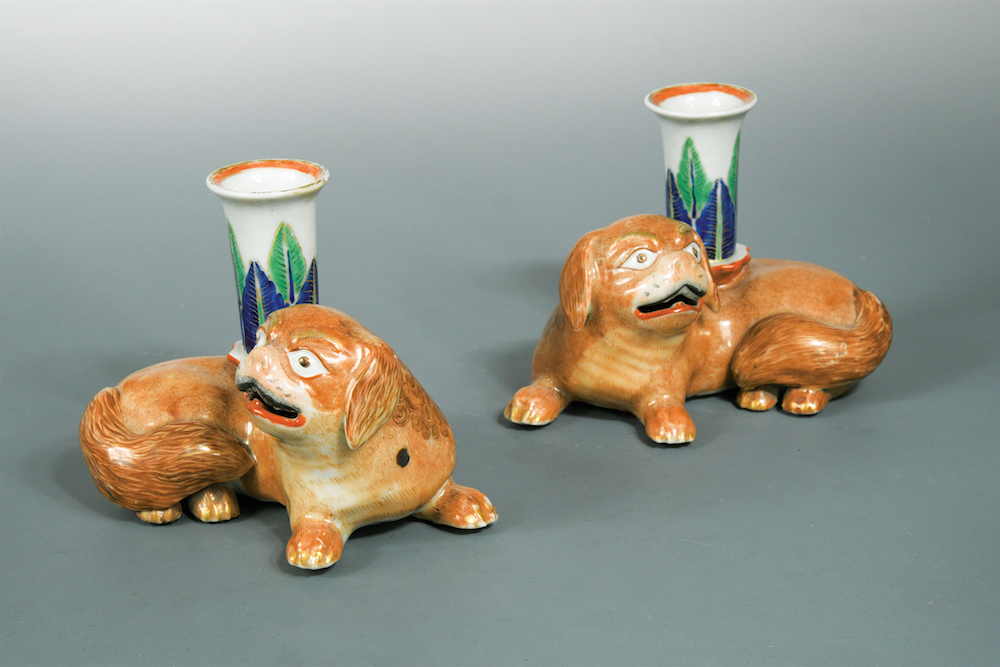 Staying in the Far East but sold in England by Cheffins was a pair of Chinese candle holders, the holder decorated with blue and green leaf motifs with the bases in the form of lying Pekingese, their tails curled over their back paws. They went over estimate to sell for £1,600. Dated to 1796-1820 they were made in the Qing Dynasty, Jiaqing Emperor Period, the fifth Qing emperor to rule over China proper.

Estimated at £1,000-1,500 Tennants offered eighteen original watercolours, unsigned, forming the title-page and illustrated pages for a seemingly unpublished work. They were offered together with various other watercolours and a manuscript, all the work of London born artist and illustrator CAM (Barbara Mary Campbell) (1913-1984) but the collection failed to find a buyer. 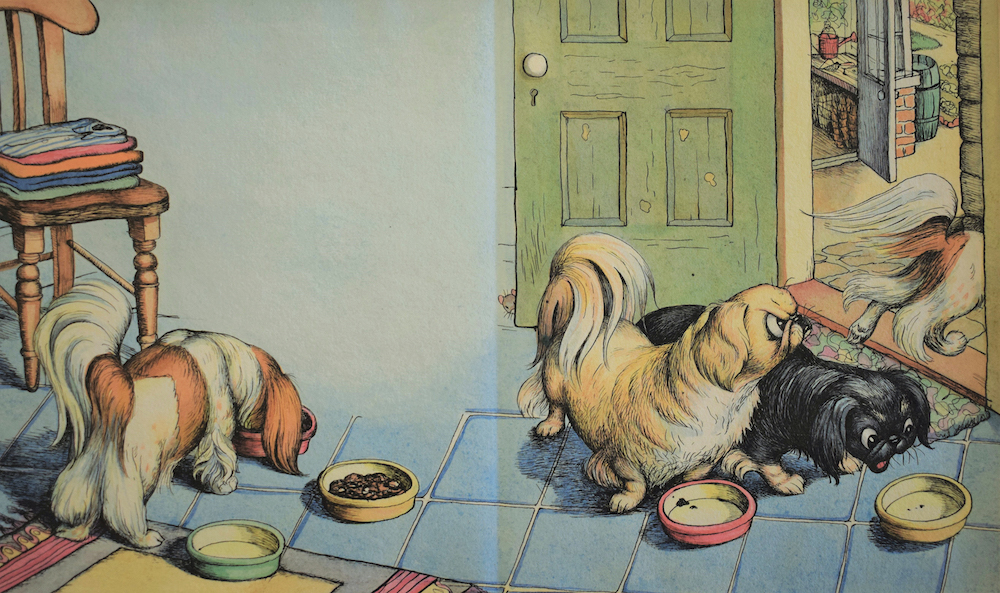 Trained at Clapham School of Art, St. Martins School of Art and the Central School of Arts and Crafts, Barbara Campbell started writing and illustrating children’s books whilst in the land army during the Second World War. Throughout the 1940s and 1950s her output was prolific with such titles as "The Story of Buttercup Fairy," "The Story of Timothy Tabbycat," "Bill Frog to the Rescue" and "The Three Jolly Boatmen." In addition to her writing and illustrations she also made a large number of models for the Science Museum. 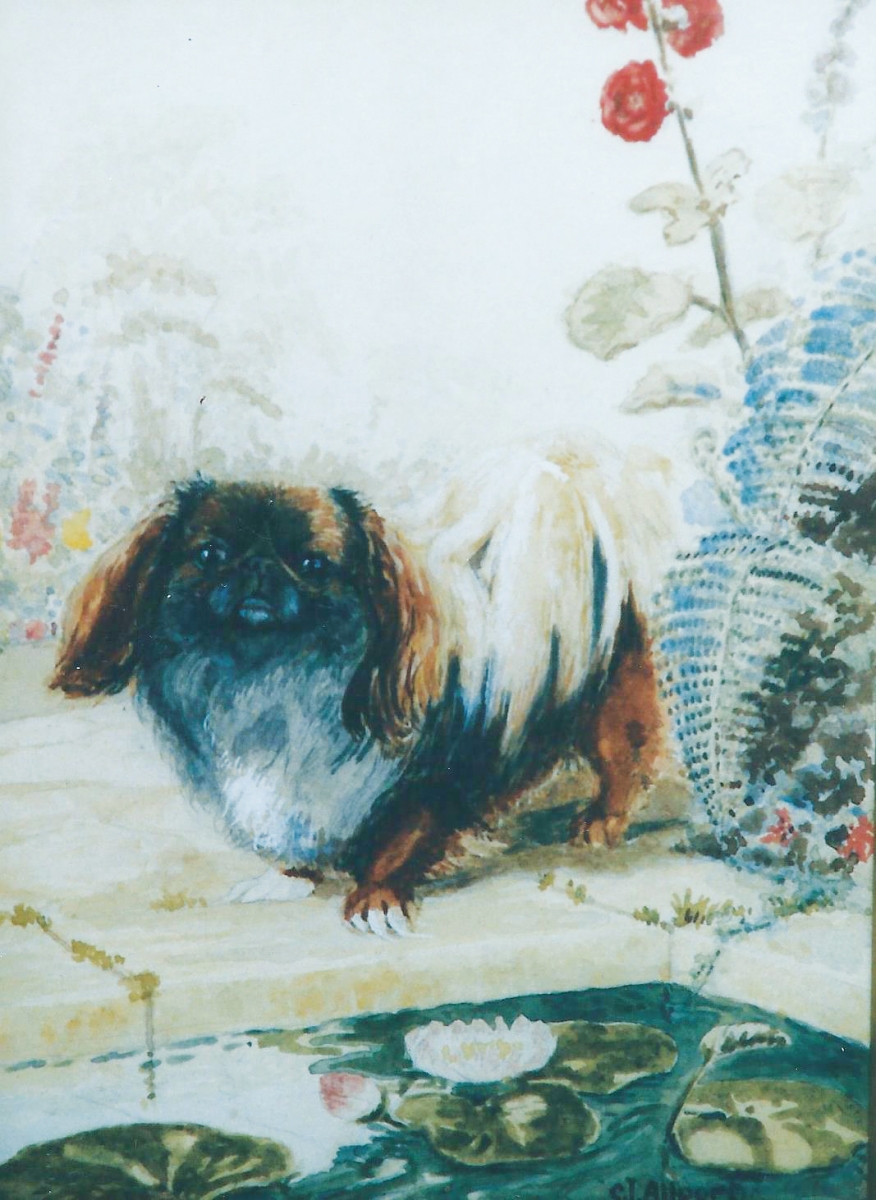 Proving there are still some bargains to be had in art was the sale at a mere £90 of the watercolour "Pekingese in a Secret Garden" by Charles J. Allport. Little is known about the artist other than he was a Pekingese enthusiast and acquaintance of John A. Vlasto, successful breeder and later judge of the breed. Allport’s illustrations for Vlasto’s ‘The Popular Pekingese’ (1923) established for the work the criteria by which the breed is understood. He was among the first to illustrate the division and balance of the ideal Pekingese head. Basically the system he adopted was to enclose the face in a rectangle measuring five horizontally to four vertically. 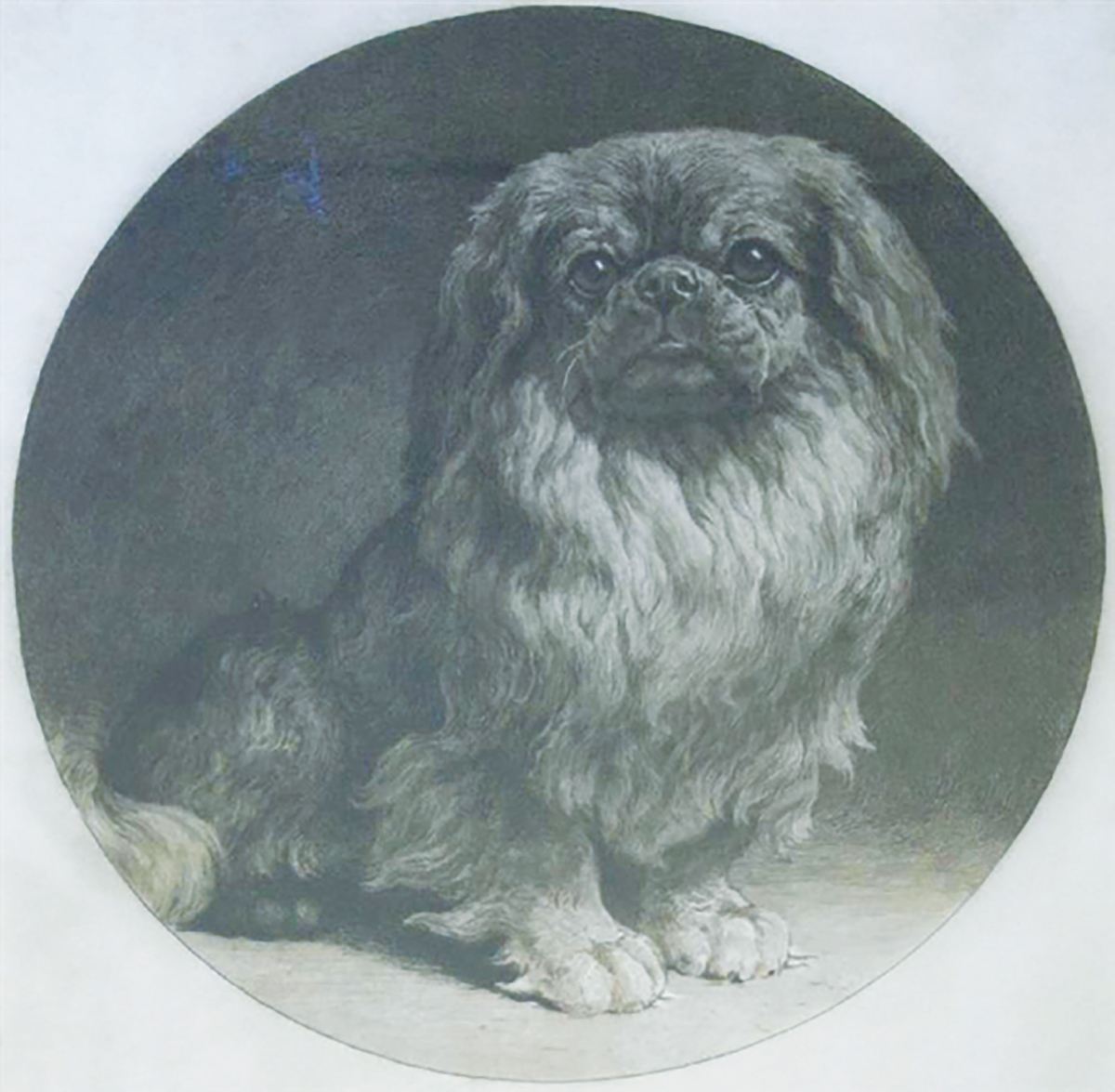 Herbert Dicksee belonged to an illustrious family. His father was the artist John Dicksee, John’s bother Thomas was also a painter, as was his son Frank Dicksee who was elected President of the Royal Academy in 1924 and Knighted the following year. Herbert studied art at the Slade School, London and exhibited his first painting in 1881.

His paintings were usually done from life and he specialised in dogs of which the family owned many and wild animals which he observed at London Zoo. Many of his paintings were published as prints and etchings and widely distributed and it is for these, rather than for his original work, that he is best known today.

Dicksee’s dog etchings are popular among collectors and dog enthusiasts today and are characterised by a soft, realistic, often soulful interpretation. He died in 1942, his daughter Dorothy being the sole executor of his will which directed her to destroy most of the plates for his etchings.

The etching of the sitting Pekingese featured here sold privately for £800. A copy together with Dicksee’s etching of a sleeping Pekingese sold in New York in Doyles ‘Dogs in Art’ sale in 2003 for $3,883, almost certainly an auction record.

It is difficult to separate the Pekingese – the Lion Dog – from the Foo Dogs – the Imperial sacred guardian lions from ancient Buddhism. Dog-like animal forms appeared thousands of years before the Christian era on Chinese bronzes, and later animals readily recognized as small lion-like dogs appeared on the pottery and porcelain work in which the Chinese excelled. But in the course of time as Buddhist art of China developed the Lion Dog or Pekingese was allowed to take over the form of symbolism of the sacred lion until this dog eventually became the representation of Chinese faith.

Bronze pairs of Dogs of Foo are by no means rare and most collections of Pekingese art include at least one pair. This rather large pair of 17th/18th century Chinese bronze Buddhistic Foo dogs sold for a mid-estimate £120 in Hannams sale of Oriental Works of Art.

© Dog News. This article may not be reposted, reprinted, rewritten, excerpted or otherwise duplicated in any medium without the express written permission of the publisher.
Fri, 03/20/2020 - 2:22pm