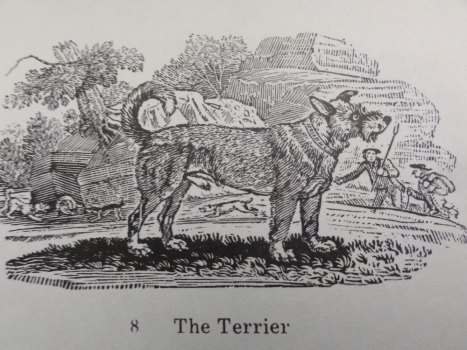 Thomas Beswick and his legacy
By
Nick Waters

“To plan successfully for the future one first has to understand the past” is a saying with which I concur but cannot claim authorship. The wealth of breeds we have today have been developed from a much smaller pool by selective cross-breeding and given names considered appropriate. This is particularly so with the short-legged terriers, land spaniels and bull breeds.

Much the same goes on today with breeders, much maligned by some, who cross one breed with another and give them such names as Cockapoo, Cavachon, Sprocker, Labradoodle and so on. The main difference between today’s breeders and those of the past who crossbred is that in the past originally it was always done for a purpose and not just aesthetics and companionship, as is the case with some today. In the years to come we may see Cockapoos winning Best in Show at Crufts and Westminster as we have with Scottish Terriers and English Springer Spaniels.

Understanding how breeds were and how they have evolved over time is reliant upon the work of artists, engravers and more recently photographers. In many cases we have “artistic license.” Artist Arthur Wardle and the Thomas Fall photographers, for example, were masters at giving their clients what they knew they would like to see. What could possibly be wrong in altering an ear shape, improving a front, levelling a back! All that said, they did give us an idea of what a breed was like at any given time, if not all the individuals.

The two earliest illustrators who offer us any sort of idea are French naturalist Comte de Buffon (1707-1788) and English wood engraver and natural-history author Thomas Bewick (1753-1828), whose work was less stylized than Buffon’s but is arguably more important.

Bewick was born in Northumberland, the eldest of eight children whose father was a farmer and coal-mine owner. From an early age he showed signs of artistic talent, although he had seen no paintings other than the ones in church and the boards over the four local taverns. He soon began covering the margins of his exercise books and the walls around the family hearth with drawings of imaginary battles and the animals and birds he was familiar with.

Appreciating his son’s talents, his father sent him as an apprentice to Ralph Beilby, who ran an engraving business in nearby Newcastle upon Tyne and with whom he would later collaborate. Bewick soon became adept at this unfamiliar technique and one of his blocks, “The Huntsman and the Old Hound,” won him a seven-guinea award from the Society for the Encouragement of the Arts, Manufacturers and Commerce. On finishing his apprenticeship Bewick went to London, but he found the city totally alien to the wilds of the north of England. 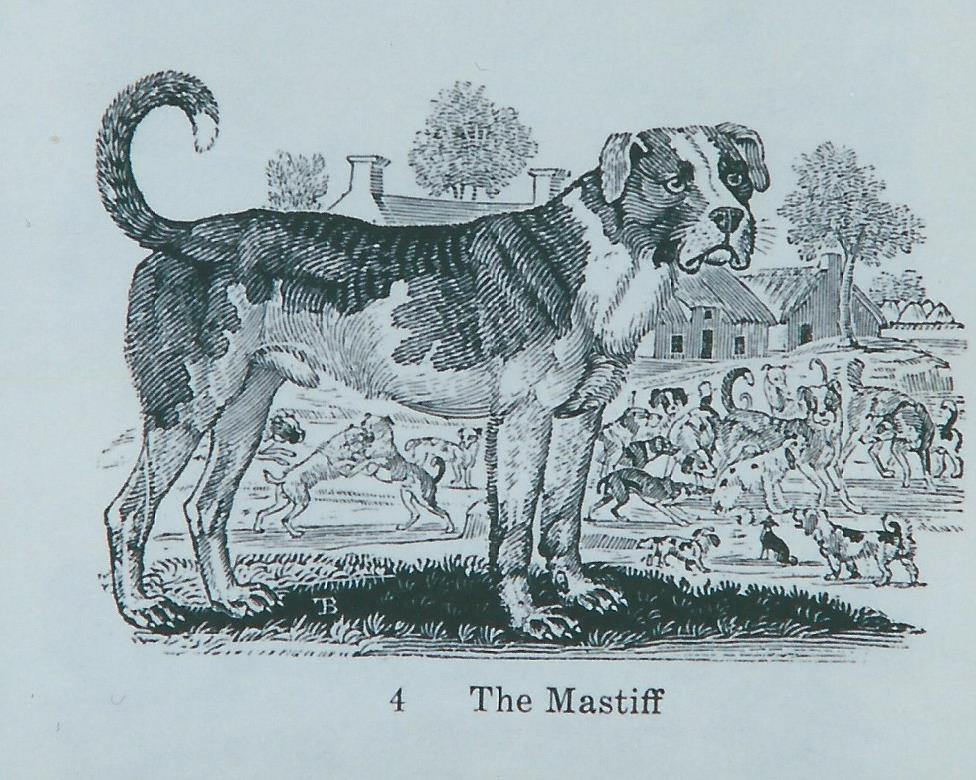 He soon returned to his beloved Northmberland, where he opened a shop at Newcastle with his brother and for the next 50 years produced, with his pupils and associates, a series of woodblocks so skillful that for the first time wood engraving became an art in England. In 1785 Bewick began work on the woodcuts for the book that was to make him famous, his “General History of Quadrupeds.” 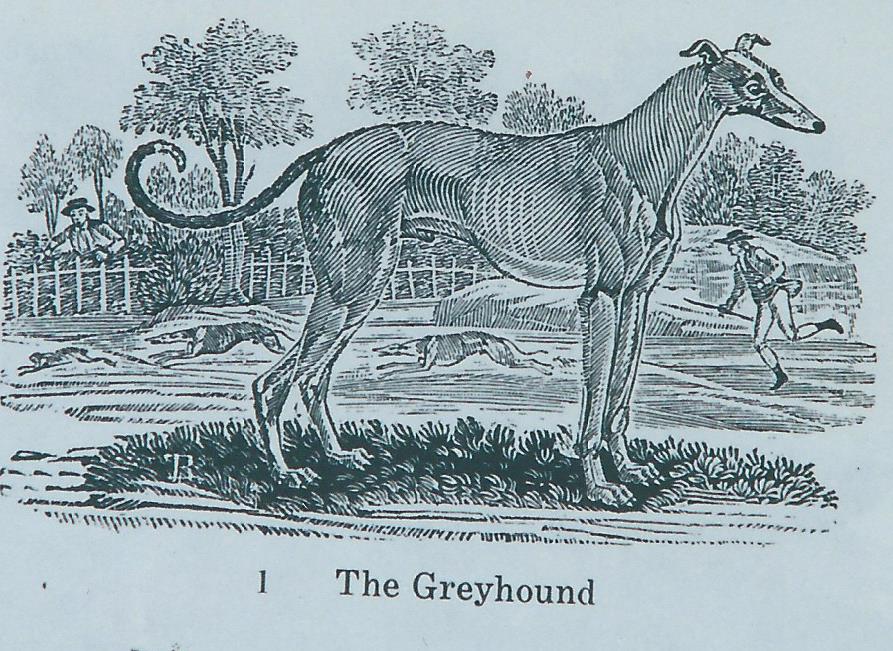 To historians and those researching the history of purebred dogs, Bewick’s woodcuts are among the most important visual reference we have from the years that predate our obsession with purity of lineage and a consequent move from function to form. He shows us, probably more accurately than most others, the breeds that existed at the beginning of the 19th Century, which were only a fraction of the many that by the end of the century had become established by selective cross-breeding. What is remarkable about these woodcuts is that so much detail was put into something that was frequently no more than two inches high. “Miniature masterpieces,” as one writer has described them. 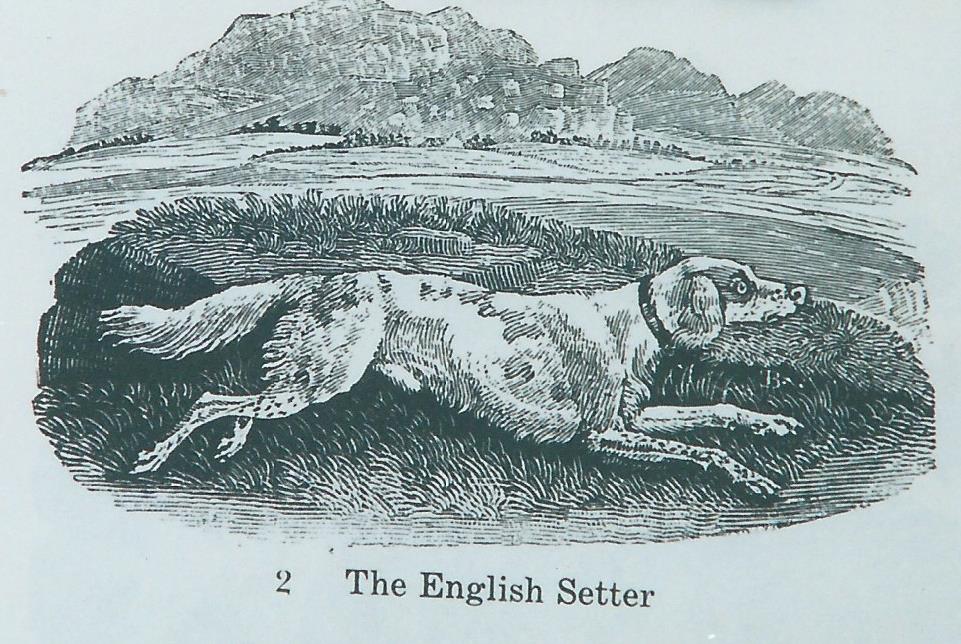 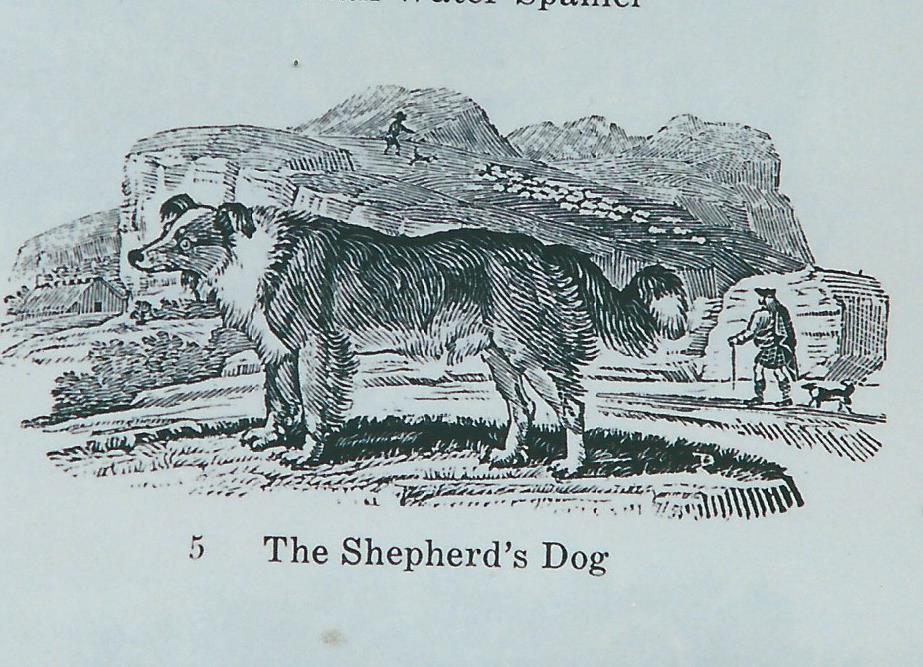 Some of the breeds Bewick observed would be instantly recognizable today, examples being the Greyhound, English Setter, Greenland Dog and many of the scenthounds whose development over the years has been for work and not aesthetic appeal. The Shepherd’s Dog is not far removed from the Rough Collie with its pointed nose, small ears, plumed tail and rough coat, although without the profusion to which we are now accustomed. 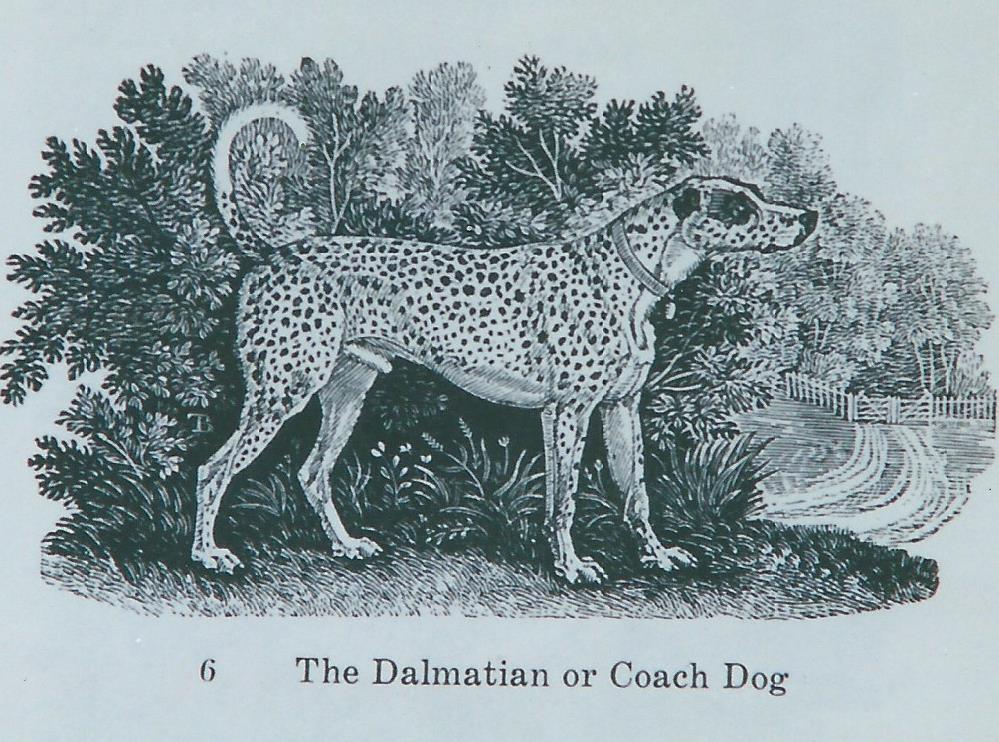 The Dalmatian did not have the symmetry of spots that now defines the breed, resembling the much earlier depictions of the breed when it was associated more with sport than as a carriage dog. The Springer or Cocker Spaniel (defined as one breed) carried a long, feathered tail, for docking had yet to become fashionable. The Newfoundland did not have the bulk and coat that the breed has today, and it is worth noting that Bewick (and others) portrayed a white and black dog long before Sir Edwin Landseer. Like so many of his fellow contemporary artists, Bewick’s Spanish Pointer is a virtual copy of George Stubbs’ Spanish Pointer, painted in 1766. 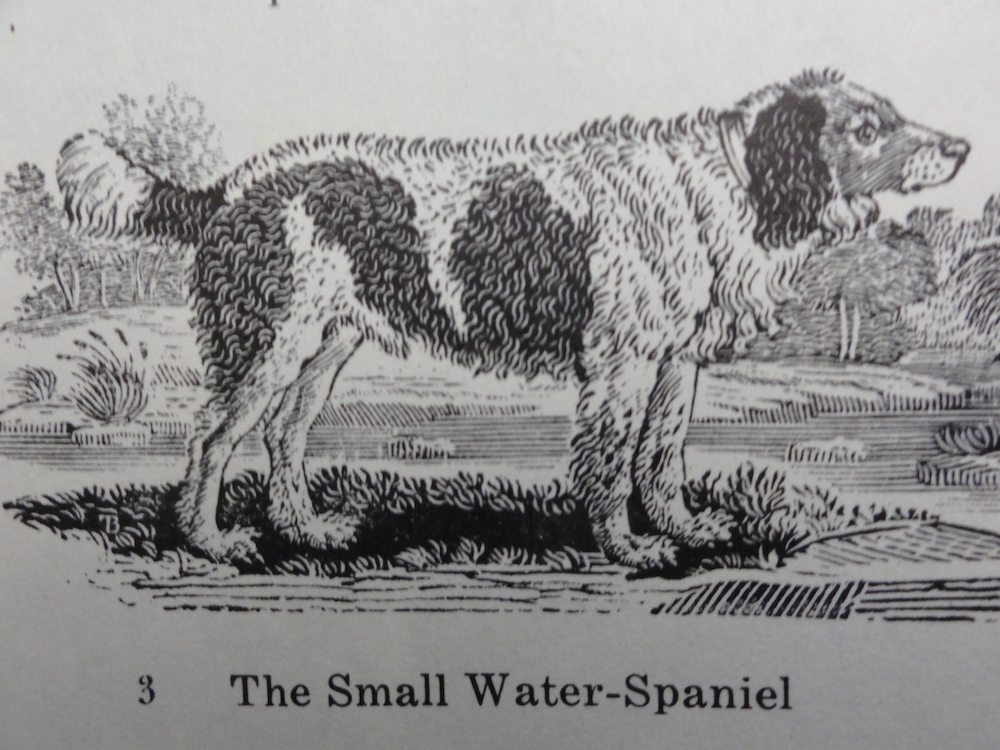 Some of the breeds depicted are no longer with us. The Small Water Spaniel, which became the extinct English Water Spaniel and whose DNA can be found in the English Springer Spaniel, is one example. The Bulldog is unrecognizable as the breed we know today, resembling more the Mastiff, being longer on leg for athleticism and with a head and jaw that could easily grip a bull’s nose. It perhaps has to be said that the breeds that have changed the least since the days of Bewick are those with a long and continuous association with field sports and work rather than those that, for various reasons, no longer perform what they were originally bred for. 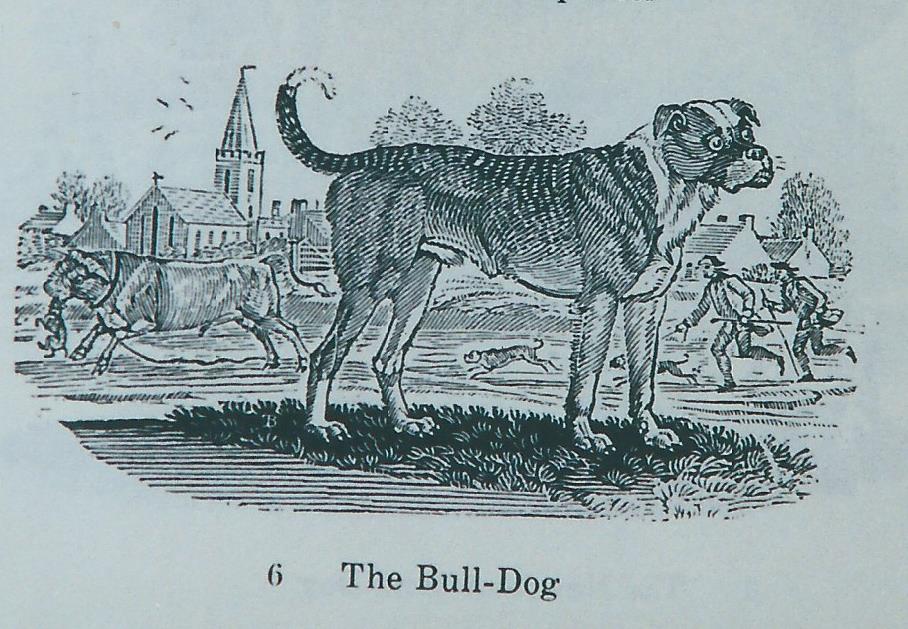 Thomas Bewick observed all rural life, the characters and rascals that populated the countryside, hunting, shooting, coursing and fishing, along with long-banned sports such as dog fighting and badger baiting.

The backgrounds to many of the dogs are themselves miniature scenes – Greyhounds coursing, terriers baiting a badger, a bull being baited, a sledge pulled by two Greenland Dogs and a Scottish shepherd resplendent in a particularly short kilt working his dogs in the Scottish Highlands.

© Dog News. This article may not be reposted, reprinted, rewritten, excerpted or otherwise duplicated in any medium without the express written permission of the publisher.
Wed, 12/02/2020 - 10:04pm