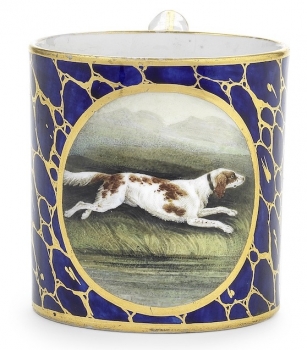 From Fine Porcelain to Naïve Pottery

Dog figurines for every strata of society
By
Nick Waters

Trade between Europe and the Orient grew rapidly during the 17th Century, and as a result collecting porcelain became easier and more popular. This, along with the new custom of drinking tea, coffee and chocolate, created a huge demand for porcelain cups, cans and saucers. The desire to find the secret of its formula and emulate the production of hard-paste porcelain in Europe became more and more intense, particularly as the royal houses of Europe were draining their coffers importing it in large quantities.

In 1710, as a result of the work of Friedrich Wilhelm Böttger, who had worked for Frederick I of Prussia and under the patronage and authority of Augustus II, the first factory for the manufacture of porcelain was founded in Europe by royal decree. In England it was a soft-body porcelain that was first manufactured, the early firms being Chelsea founded circa 1745, Bow circa 1748 and Derby circa 1750.

Auction house Bonhams in London recently sold the British porcelain element amassed by the U.S. collector Richard Baron Cohen over a relatively short 20-year period. Known as the “Twinight Collection,” it focused on rare and beautiful pieces created by the best artists and craftsmen of the day. A number of pieces included dogs in their decoration.

A remarkable Derby cabaret service by John Brewer circa 1800 sold for £10,837. It was painted with panels of animals, birds and butterflies, with a Pointer and Setter on the teapot, and on the sucrier and cover, two hounds. 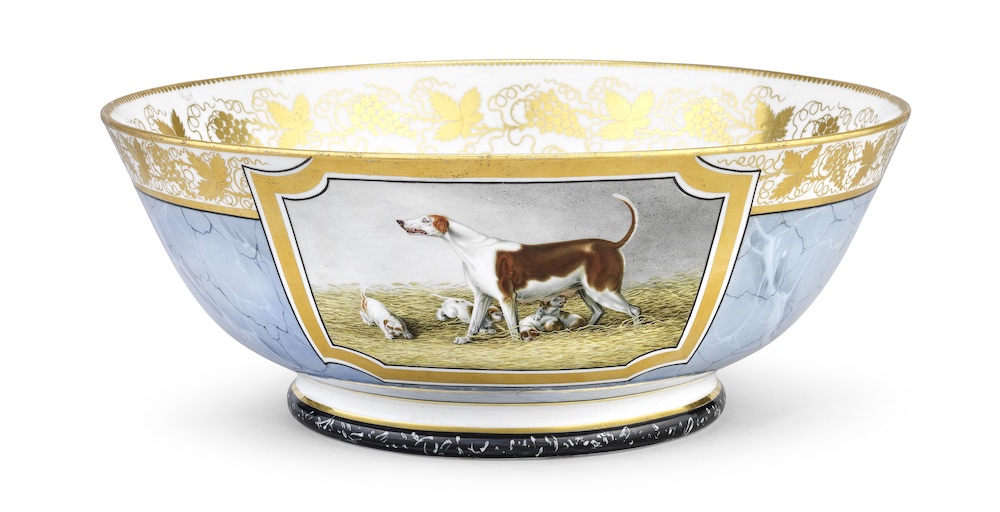 A Chamberlain Worcester punchbowl circa 1810 realized £9,562. This was painted with three large gilt-edged panels of sporting dogs taken from The Rev. W.D. Daniel’s “Rural Sports,” published in 1802. On one, two Greyhounds are coursing a hare; on another two Pointers that belonged to Colonel Thornton, and a Foxhound bitch and her puppies on the third. 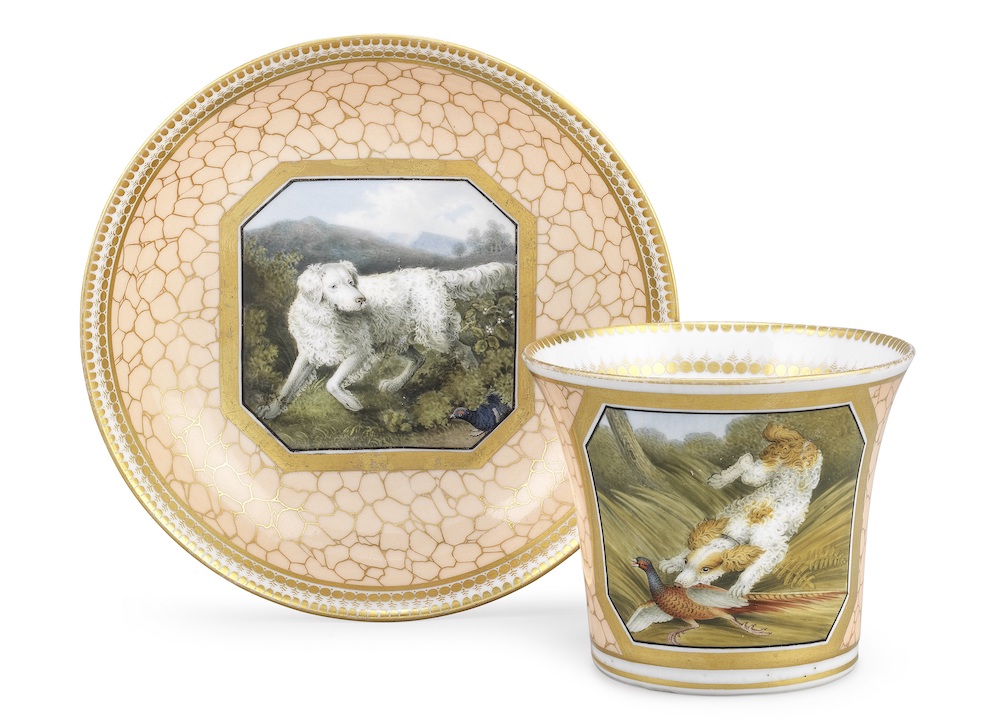 Selling for £1,785 was a second Chamberlain Worcester lot, circa 1803-04, that included a cabinet cup decorated with a Spaniel and pheasant and a saucer decorated with a Setter and black grouse. The illustrations were also from “Rural Sports,” of which the factory owned the three-volume set and used it as a source to decorate a wide range of ornamental porcelain. 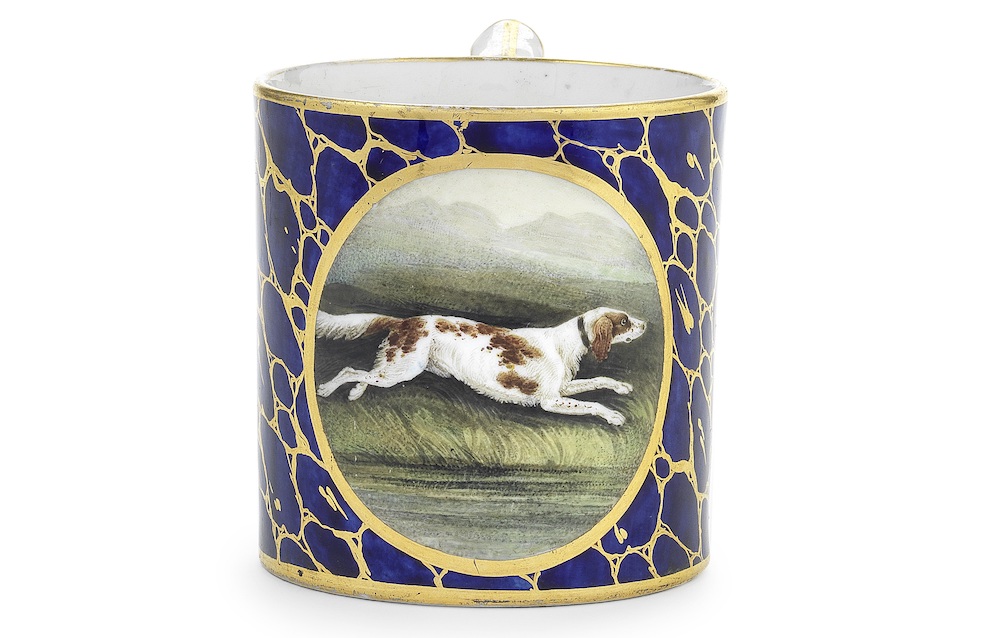 An early Grainger and Co. Worcester mug, circa 1810, with a panel possibly painted by John Wood featuring a Setter in a moorland landscape, sold for £956.

Some of the most finely made and exquisitely beautiful pieces of English porcelain were made under the most appalling conditions ever known in Britain: less-than-basic living conditions, extremely long working hours, virtual child-slave labor, heat and sulphur fumes from the furnaces, which hung heavily in the air and from which there was no respite, and the ever risk of fire from candles and oil lamps. Life expectancy was low, and for many their only escape was church on Sundays at the behest of their master, from where they returned with the knowledge that they would get their just rewards in heaven. These conditions were felt none more so than for those working in the Staffordshire Potteries.

The phenomenon that was the Staffordshire Pottery figures lasted from the 1840s, when press molding and slip casting meant pottery figures could be made relatively cheaply, to the early years of the 20th Century.

Britain was gradually evolving from a totally rural society to a pioneering industrial one. With that came increased prosperity for classes that had previously never been able to consider any luxuries of life. To meet this new prosperity, items of a purely decorative nature were going to be produced alongside totally functional wares. If these people could not afford the sheep and shepherds of Meissen and Chelsea, much favored by the aristocracy, then they could afford a cheaper one produced of clay, by cheap labor and in less-than-basic conditions.

It was under these conditions – when the rich were getting richer and more powerful, prosperity spread to more classes and villages expanded into towns – that the Staffordshire Pottery figure was born. It was also a period of great poverty and exploitation, of starvation, disease and no sanitation, and it was in these conditions that the people who worked in the Potteries found themselves.

The only time that they would have been noticed by their superiors was if and when they failed to “touch their forelocks”! With illiteracy widespread, even with many of the employers, the climate was right for exploitation. Wet clay weighed heavy, and workers not employed on the artistic side would walk perhaps up to seven miles a day carrying, by present-day standards, cripplingly heavy quantities of clay; sometimes these workers would be as young as seven years old.

The output portrayed what was happening at the time. There were political figures, military leaders, actors, churchmen, pioneers and members of royal families. Occupations and pastimes of the day were also recorded, and animals became a great feature, with the dog playing an important role. Although many breeds were made, the three most popular were the Toy Spaniel, Greyhound and Newfoundland. The first represented peace and tranquillity, the ladies comforter; the second sport and the chase, and the third heroism and companionship. 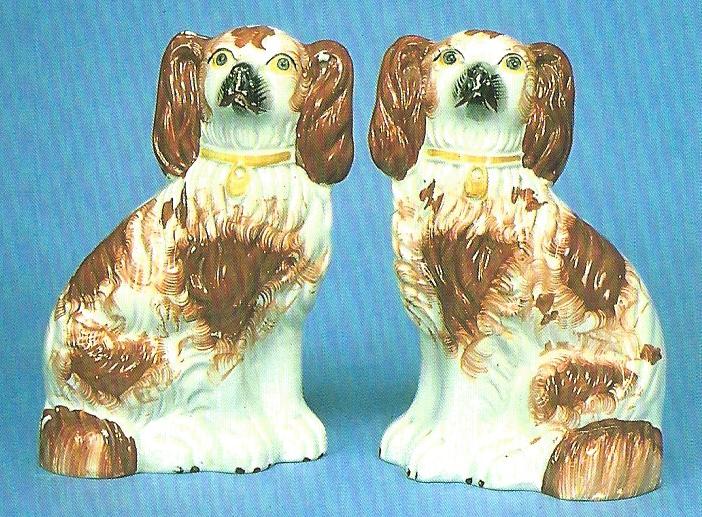 The Toy Spaniel in most art of the period was influenced by Queen Victoria’s “Dash,” whose portrait was painted by Sir Edwin Landseer. Known as “comforter dogs,” they were by far the most popular of all Staffordshire figures, and by the early 20th Century there would have been few cottages that did not have a pair on their mantelpiece. This pair with yellow collars was made circa 1865. 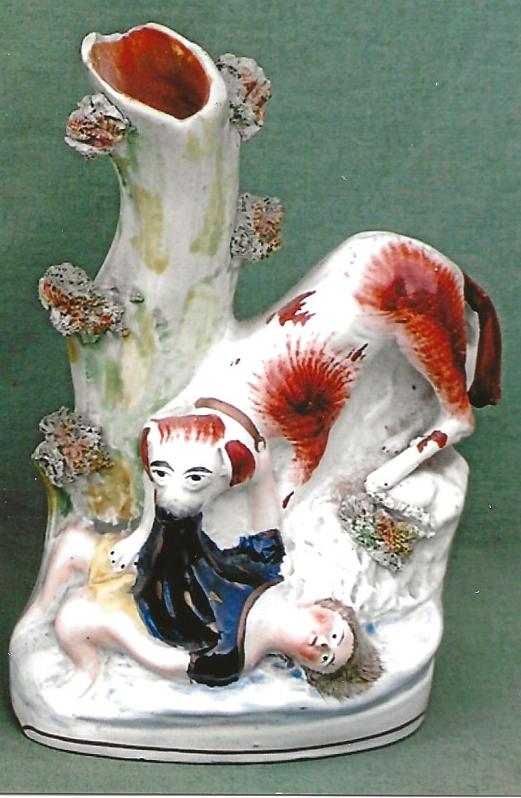 Landseer’s painting “A Distinguished Member of the Humane Society” popularized both the Newfoundland and canine heroism. The spill vase of circa 1850 modelled as a dog bringing a girl to safety is one of a number of similar examples from the Staffordshire potters. 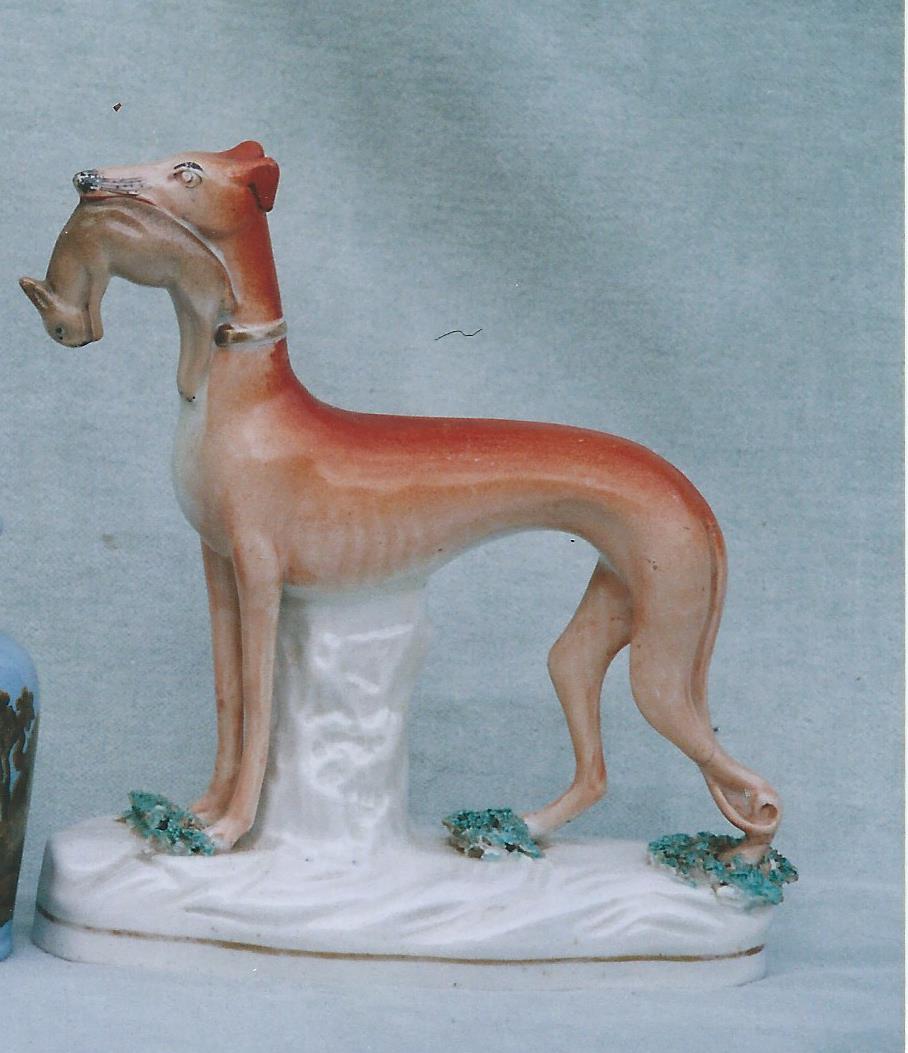 Coursing with Greyhounds was one of the most popular sports in the 19th Century, and there are many examples of Greyhounds with hares made in the Staffordshire Potteries. The one here circa 1850, with free-standing legs, a cut-out tail, pricked-up ears on the hare and with clumps of foliage at its feet, is one of the most detailed of all the Greyhound models. 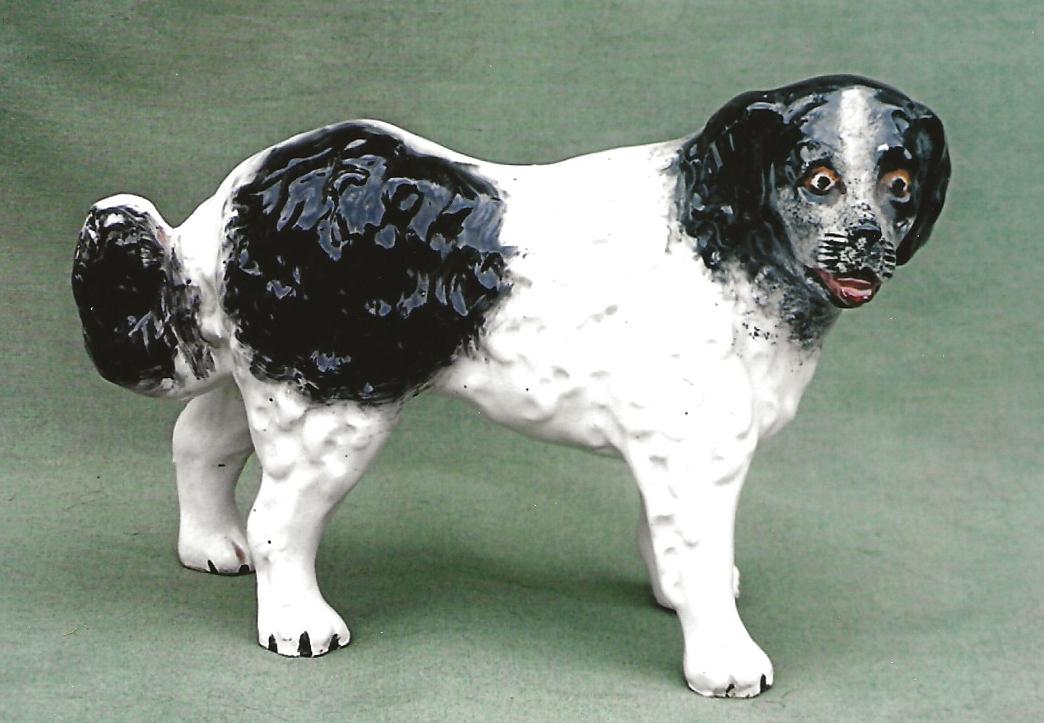 The naturalistic stance of the Landseer Newfoundland without a base or spill, or any other accompaniment for support, only occurs in models toward the end of the century, and this one would have been made circa 1885-90.

© Dog News. This article may not be reposted, reprinted, rewritten, excerpted or otherwise duplicated in any medium without the express written permission of the publisher.
Sun, 12/26/2021 - 4:01pm