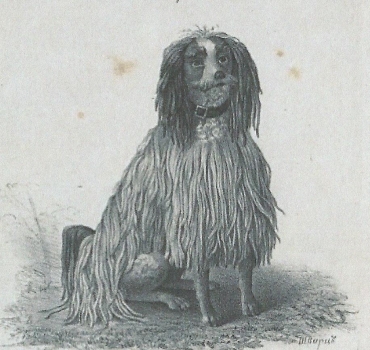 Putting Style into the Poodle

Presentation and trimming in the days before electricity
By
Nick Waters

This feature offers a glimpse into styling and trimming in the days before electricity and all the aids that today are commonplace. 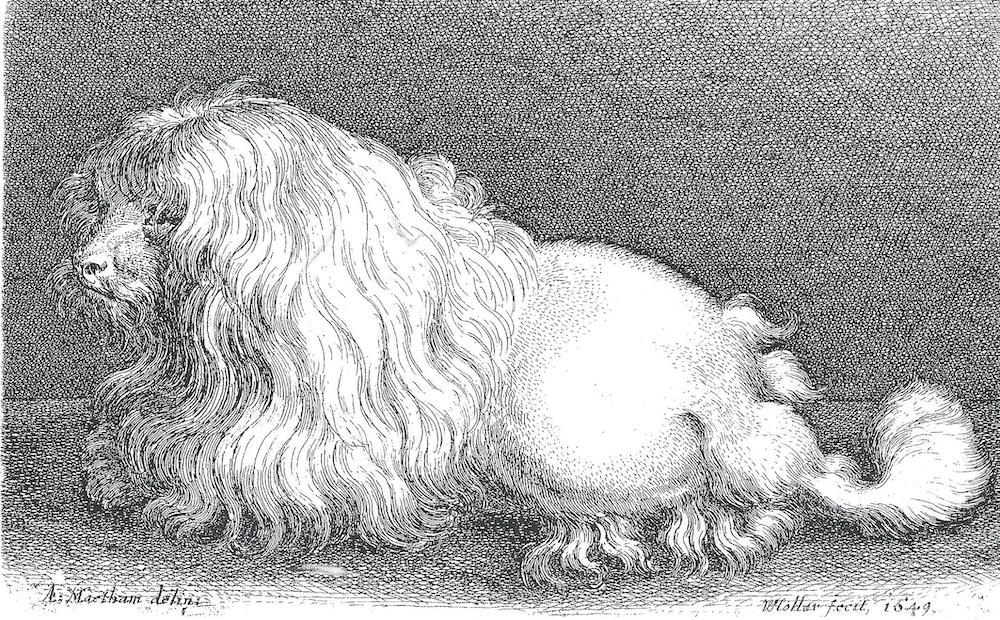 The earliest image is an engraving by A. Maetham published in 1649 from an original by the Bohemian artist and etcher Wenceslas Hollar (1607-1677). Born in Prague and destined to become a lawyer until his family was ruined by the Sack of Prague and the 30 Years War, Hollar then turned his attention to becoming an artist.

In 1636 he attracted the notice of art collector and diplomat Thomas, Earl of Arundel, who was on a mission to the imperial court of Emperor Ferdinand II. Hollar arrived in England in 1637 with the earl, and remained in the earl’s household for many years.

It has been suggested that the inspiration for Hollar’s picture was Prince Rupert’s Poodle, Boye. There is strong evidence to support this, for Boye was given to the young prince by Lord Arundel at the time the prince was imprisoned in the fortress of Linz, having been taken prisoner after the siege of Minden. After his release, Prince Rupert came to England to support the Royalists in the Civil War, and Boye came with him and was virtually the Prince’s shadow, so much so that the Parliamentarians thought Boye was in league with the Pope and the Devil.

A crude woodcut of the time shows Cavaliers encouraging Boye to seize one of the Parliamentarian’s dogs. “To him Pudel,” says one of the Cavaliers, the words appearing in a speech balloon out of his mouth, so is formed the first use in English literature of the word “Poodle.”

When the two sides were engaged in battle, the Prince would tie Boye to a baggage wagon in the rear. Unfortunately he forgot this precaution at Marston Moor, and Boye followed him into the hottest part of the fighting and fell on the field. 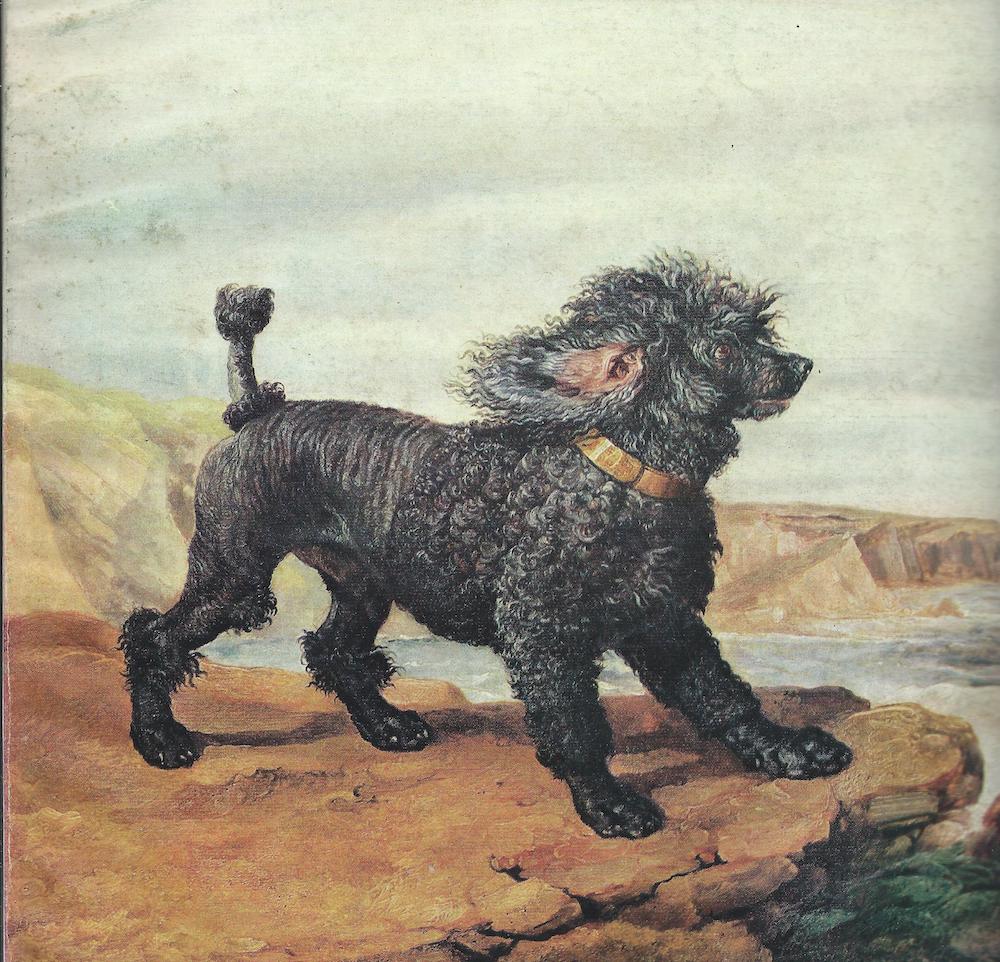 The black Poodle wearing a brass collar is named Buff, who allegedly accompanied his master throughout the Peninsular War (1807-1814) when the United Kingdom assisted Spain and Portugal in their struggle against the invading forces of France. It is claimed that on one occasion Buff broke loose from the batman and followed his master throughout the Battle of Talavera in 1809.

He was the pet of Lieutenant-Colonel William Chester Master, who served as Gentleman Usher of the Privy Chamber to three successive British monarchs. Buff is shown standing on the cliffs of Dover, ears flying, barking defiantly at the menacing French across the English Channel. His portrait was painted by James Ward R.A. (1769-1859), a London-based painter and engraver primarily of animals. 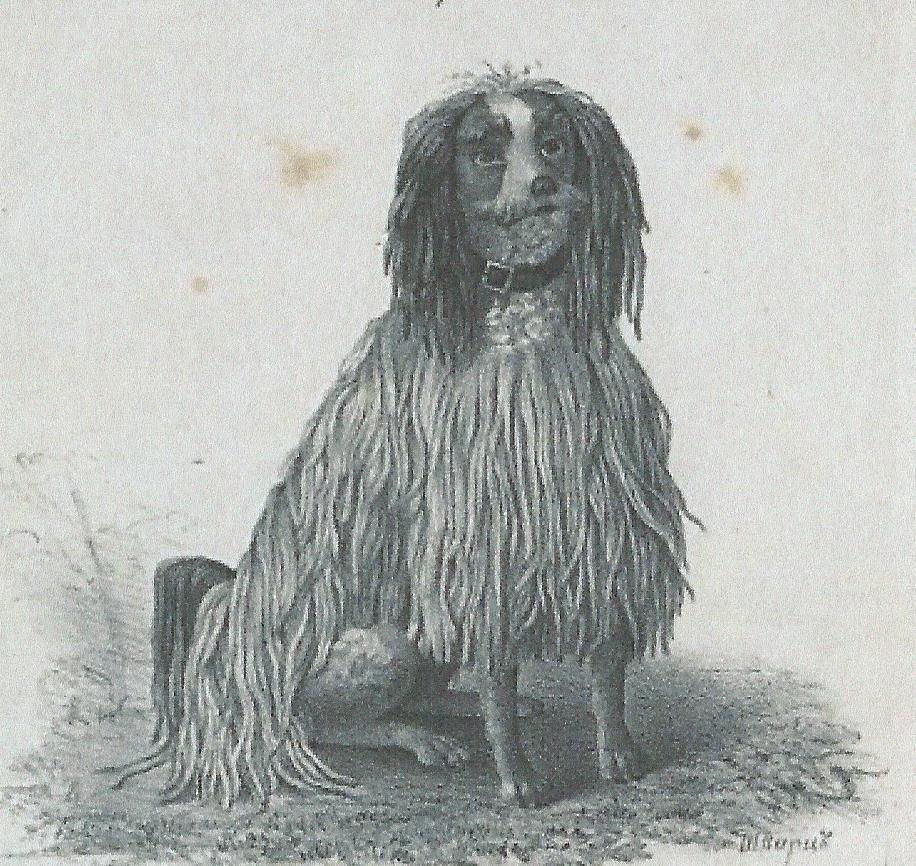 The sitting corded dog is the work of Vyacheslav Grigoryevich Schwartz (1838-1869), Russian history and genre painter and academician. The dog was the pet of Nicholas I, Emperor of all Russia and Grand Duke of Finland from 1825 to 1855 and King of Poland until his deposition in 1831. Nicholas was known as one of the most reactionary of the Russian monarchs.

The Poodle was one of the first breeds included in the Kennel Club Stud Book. Most popular of the early show Poodles was the Corded “variety” and of a size we now would refer to as Standard. 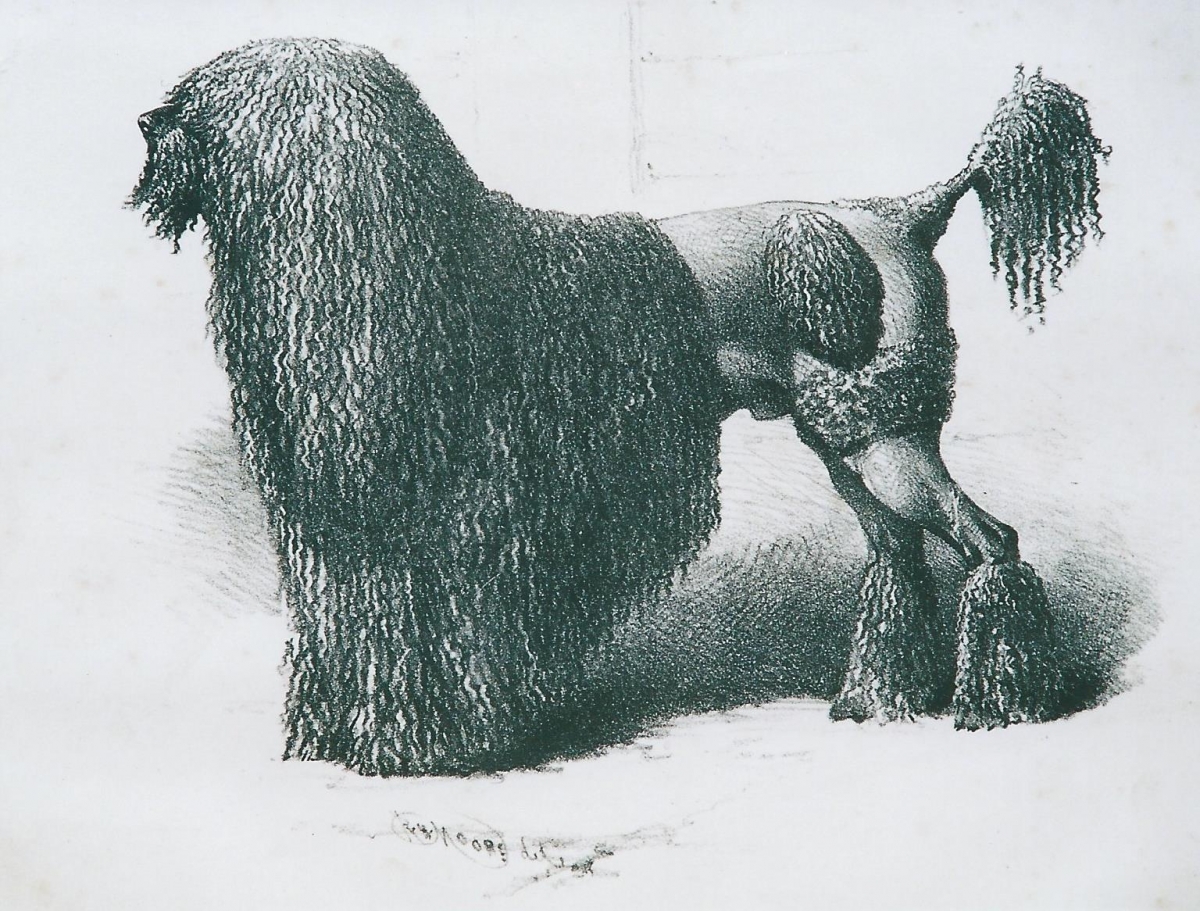 Styx was born in June 1883, owned by the Rev. Gambier Bolton and bred by Mons. M. Duchateau. Like many of the Poodles being shown at this time, his pedigree is recorded as “unknown,” and presumably he was imported from France. He was successful in the ring and won one of the largest classes for Poodles ever seen at that time in the UK at the Crystal Palace show in 1886.

In common with many of the principal winning Poodles in the U.K., Styx crossed the Atlantic to America. There he was owned by William C. Sanford and won a first prize every time he was shown.

The ink sketch of Styx was completed by artist/illustrator/sculptor Richard Hewitt Moore, one of the most prolific dog artists of the time who today is best known for his portrait studies in black and white of most of the top-winning dogs throughout the 1880s and ’90s and the early years of the 20th Century.

It is the only sketch by Moore that, to my knowledge, was copied by another artist, the American Henry Stull (1851-1913). This picture by Stull now forms part of the collection of the American Kennel Club being gifted by the Poodle Club of America. 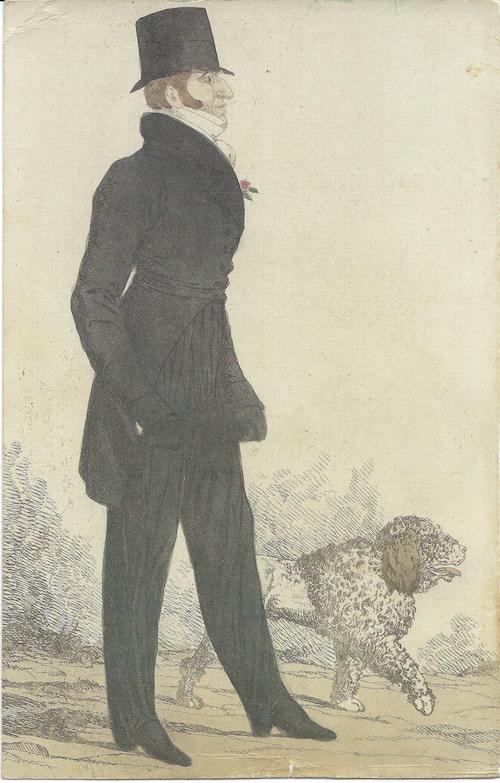 The golden age of the Regency dandy is defined by extravagance of style and fashion, tailored clothing, girdles to help achieve the silhouette, bouffant hairstyles, gentlemen’s clubs, booze, gambling, excessive parties and probably much else besides. A Poodle was perhaps the obvious choice of accompaniment in satirical portrait cartoons.

The artist responsible for this cartoon is Richard Deighton (1795-1880), who is best known for his many satirical profile portraits of contemporary London celebrities and characters. The subject is the Marquis of Worcester, a soldier in the tenth Hussars and 14th Dragoons, an aide-de-camp to the Duke of Wellington and a member of parliament. The dog is named Sancho, whom history relates Worcester found exhausted and nearly starved to death by the grave of his master, a lieutenant in the defeated French Army, after the battle of Salamanca.

The scene of the “pop-up” grooming salon 1890 style is one associated more with the streets of Paris rather than a corner of the coach house at Chatton House, Alnwick, in the wilds of Northumberland, formally the home of the Duke and Duchess of Northumberland before they moved to Alnwick Castle. In the background is an immaculately maintained trap with the shafts up, to the top right a coaching lamp and just visible a tilly lamp. 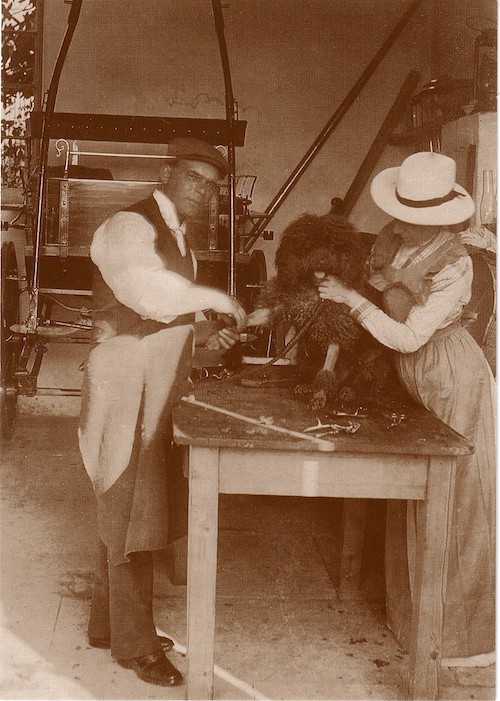 A rather handsome Poodle being steadied by a servant is clipped by another with his highly polished shoes and apron who is working with some confidence. On the table is a selection of tools including hand clippers, bent-shank scissors and a comb. The table they are working on is a type that would have been found in the servant’s quarters or kitchens in country houses.

© Dog News. This article may not be reposted, reprinted, rewritten, excerpted or otherwise duplicated in any medium without the express written permission of the publisher.
Wed, 03/24/2021 - 10:36pm