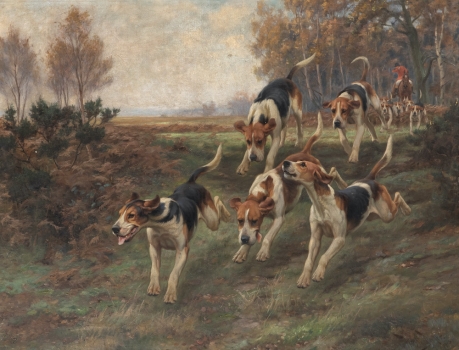 Every Picture Tells a Story

From Foxhounds to Pharaoh Hounds, here's the artistic back story
By
Nick Waters

There is usually a story behind virtually every picture painted. Some are well documented. With others, it is often a case of finding the key to unlock the story. And for a few, their story will always remain a mystery.

The Belvoir hunt (above) is one of the oldest and most celebrated hunts in the UK, dating back to medieval times and becoming a Foxhound pack in 1762. The kennels throughout the hunt’s history have been at Belvoir Castle, ancestral home of the Dukes of Rutland. The duke at the time has always owned the hounds. Situated in the heart of the Shires, Belvoir is within an hour of some of the best hunting country.

Many artists over the years have painted the pack or individual hounds from it. The picture here of a huntsman with hounds breaking cover by Wright Barker (1864-1941) was painted in 1913. The artist lived in the area of Belvoir and was noted for his genre and hunting scenes, of which this painting is a particularly fine one. It was offered for sale by Tennants with an estimate of £3,000-4,000 and generated a lot of pre-sale interest, selling for £11,000 to a private UK collector who had viewed it before the sale.

Fullerton, arguably the greatest Greyhound of all time, won the Waterloo Cup, the premier coursing event, three times – 1891, 1892 and 1893 – and divided it in 1889. He was owned by Colonel North, who made a fortune in Chilean mines and whose dogs were trained by Edward Dent. Dent had sold his entire kennel at auction in 1888, and Fullerton was bought by North for a record 850 guineas.

Following his Waterloo successes, Fullerton was sold to Russia but repatriated at vast expense by North when the dog proved sterile. Lloyd’s policy for animal infertility dates from their expenses incurred at that time. 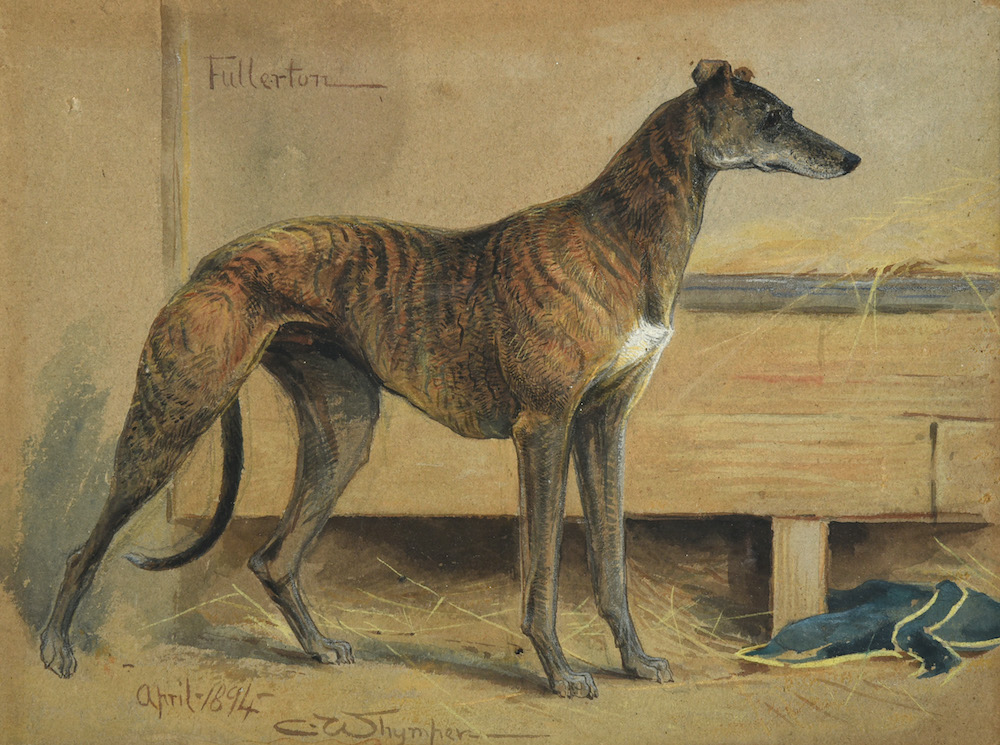 Fullerton’s picture, inscribed and dated 1894, was painted by Charles Whympher (1853-1941) and also featured in Tennants sale, selling just within estimate for £420.

In the dog world on both sides of the Atlantic, Barbara Hands is well known for her “Crinan” West Highland White Terriers. She is also a professionally trained multi-talented artist, signing her work “Boz” (a derivative of her maiden name Boswell). Barbara works in oil, watercolor and has completed many enamel brooches, a costly and time-consuming craft. One of her brooches of the Royal Corgi “Kelpie” was given as a Christmas gift for The Queen. 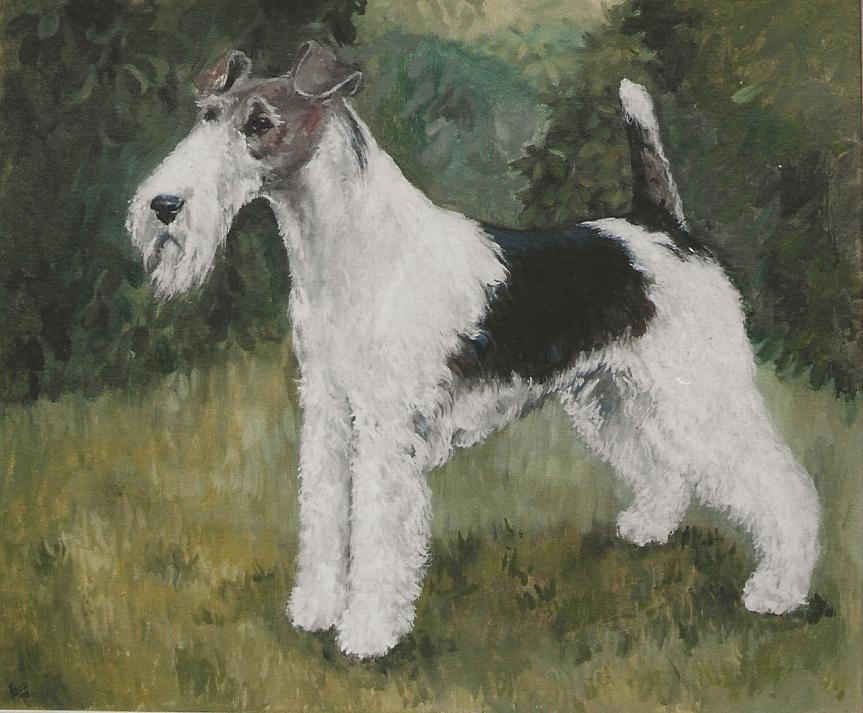 The Wire Fox Terrier was one of Barbara’s commissions in 1972 and features Ch. Cripsey Townville T’other’un, which was the first winner of the prestigious “Pup of the Year” competition, then organized by The Daily Express and Spillers Foods. T’other’un went on to win many Best in Show awards in the UK before being sold to Signor Benelli in Italy, and on the Continent he won 17 Best in Shows in nine different countries. 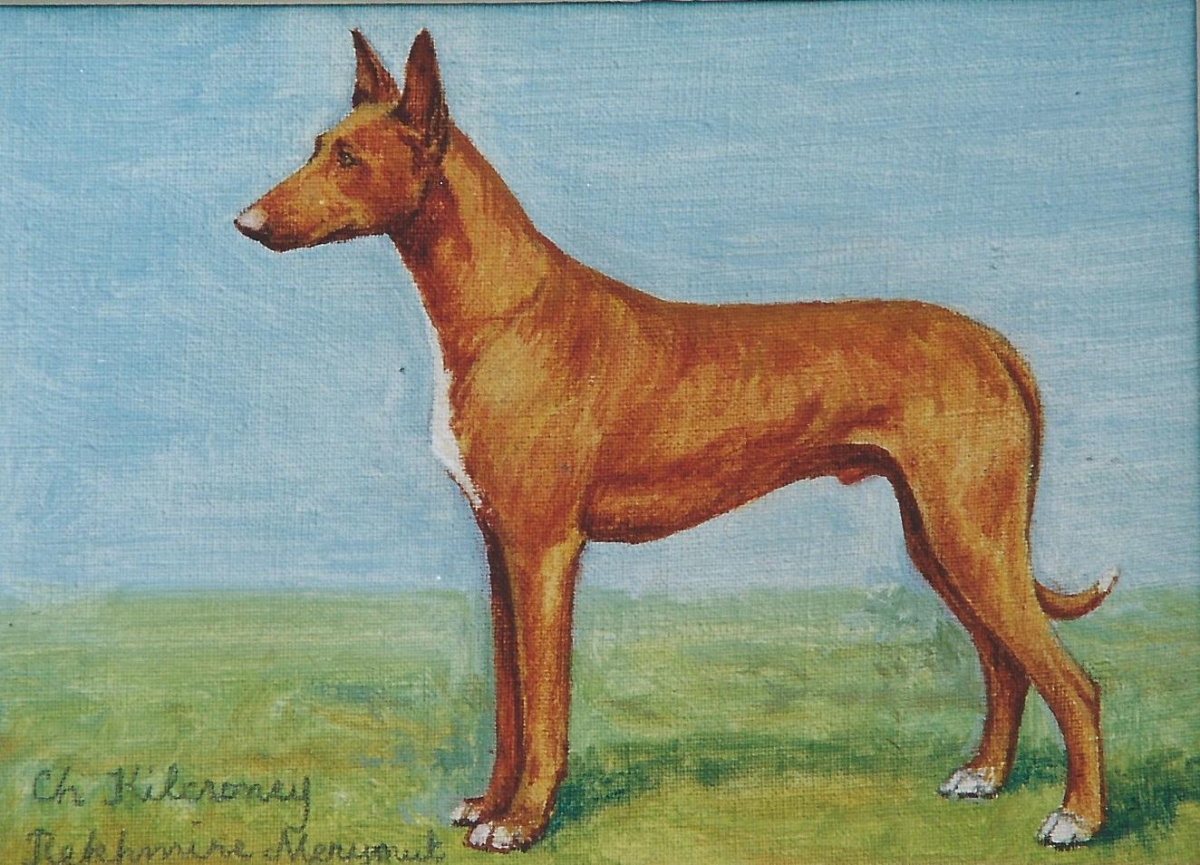 The Pharaoh Hound Ch. Kilcroney Rekhmire Merymut was painted by the Nottingham-based artist Dorothy Johnson. Rekhmire had the distinction of being the first Pharaoh Hound champion in the UK, winning his first Challenge Certificate at Crufts in 1975, the first time CCs had been on offer for the breed, and went on to win all the dog CCs that were on offer for the breed that year.

He was bred by Mrs. G. L’E West Coyne, owned by Monica Still and born in 1970 from parents whose breeding went back close up to dogs imported into the UK from Malta. 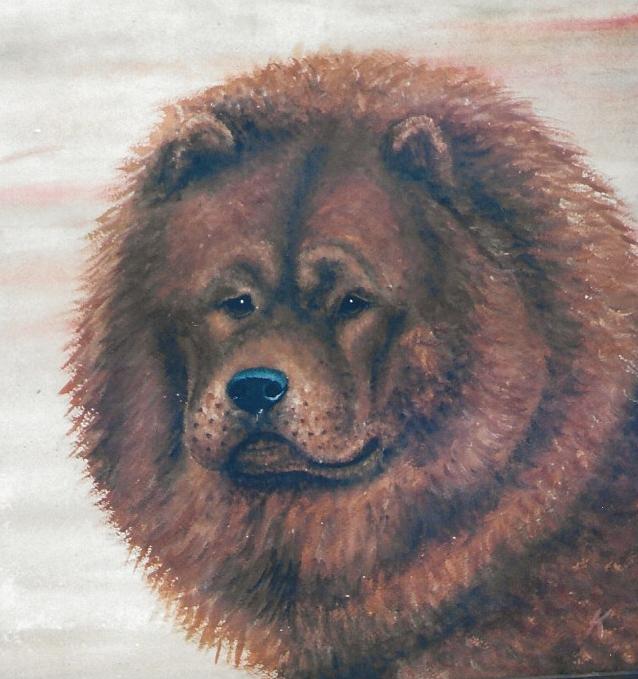 Ch. Choonam Hung Kwong was the first and only Chow Chow to win Best in Show at Crufts, which he did in 1936. He had been Reserve BIS in 1935 and repeated that win again in 1939. He won more BIS awards at championship shows in the UK than any other Chow until the 1970s, amassing a total of 44 CCs.

He was bred and owned by Mrs. Mannooch, but his portrait was probably a commission from Henk and Kitty van de Wouw, who together founded the world-famous Van Mongolie Chow kennel in the Netherlands. I suspect that it was done from a photograph, possibly one by Thomas Fall, for the dog’s ruff is as shown in Fall photographs and not so much in those of other photographers.

Hung Kwong’s portrait was painted by George Krebs, a tobacconist by profession but also a breeder of Fox Terriers and for a long time one of the very few all-round judges Holland had.

The Basset Hound Ch. Grims Whirlwind was bred By Miss Peggy Keevil, one of a small nucleus of breeders who kept the breed going in the UK throughout the war, and her kennel became the most influential of the post-war period. He was out of Grims Wanda of pure British stock by the imported Grims Ulema de Barly, a purebred Basset Artesian Normand, a practice the British Kennel Club would not permit today. He was imported by Miss Keevil as an outcross, for British Bassets at the time were in a precarious state after the war, with epileptic puppies being born as well as those with long coats.

Peggy Keevil always thought dogs were lucky inasmuch as when life became unbearable for them they could be put to sleep. Her wish – a wish that was never fulfilled – was when life got unbearable for her she would go to Holland and be euthanized.

Whirlwind was owned by Mrs. Wendy Jagger and won nine CCs, no mean feat for a Basset in the 1950s. He also hunted with the Basset Hound Club Pack and had an excellent nose. His portrait was painted by fellow dog breeder and friend of Wendy Jagger, Pamela Atkinson. 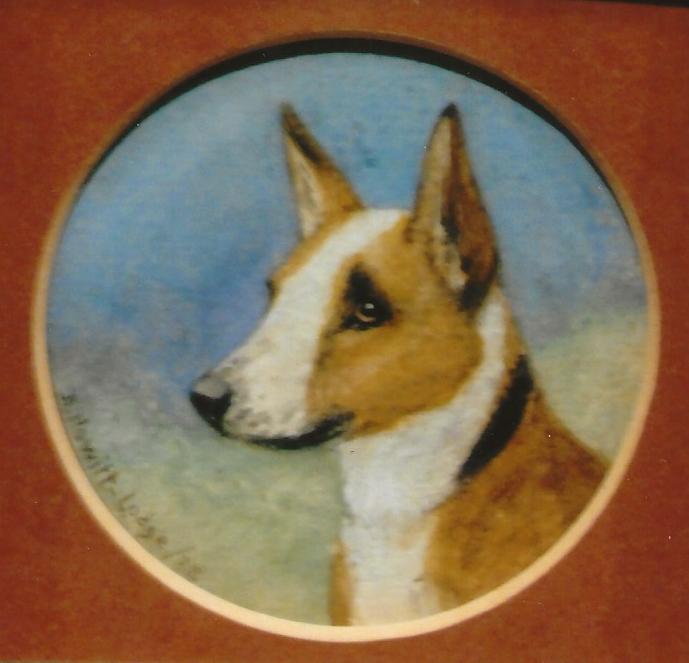 The Cardigan Welsh Corgi Bob Llwyd, whose head study was painted by B. Howitt-Lodge, is the most important to its breed of those I have featured. The Lampeter Agricultural Show in 1926 was important to the Corgi historian as it was the first major appearance of the celebrated Bob Llwyd, who went on to have a great influence on the breed. He was bred by Dr. J.T. Lloyd of Tregaron, by Bowlin out of Handy, neither of whom was registered.

Bob Llwyd was considered such an excellent example of a Cardigan that when the standard for the breed was drawn up it was based on him. He was an outstanding success as a stud dog and sired the first champion in the breed, Ch. Golden Arrow. He lived to the ripe old age of 18 years.

© Dog News. This article may not be reposted, reprinted, rewritten, excerpted or otherwise duplicated in any medium without the express written permission of the publisher.
Sat, 08/14/2021 - 10:22am