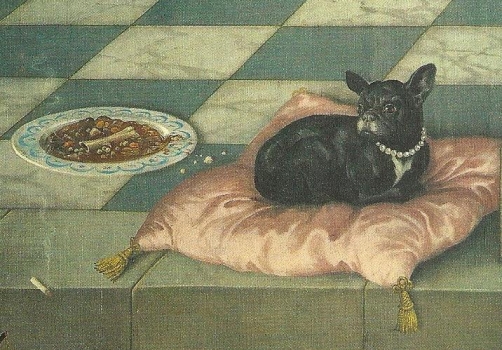 Just outside the village of Llanfairpwllgwyngyllgogerychwyrndrobwllllantysiliogogogoch (the place with the second-longest name in the world, beaten only by a village in New Zealand) on the Isle of Anglesey off the coast of North Wales is Plas Newydd. The origins of the house go back to 1470, and it is the country seat of the Marquesses of Anglesey. It nestles on the bank of the Menai Strait with views to the mountains of the Snowdonia National Park. 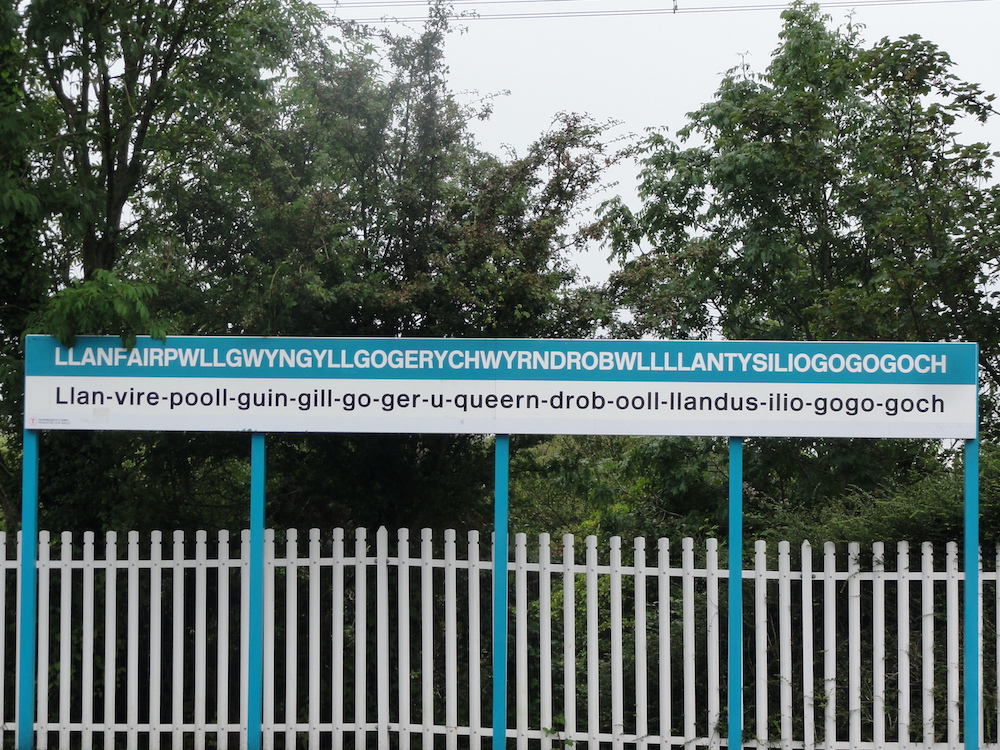 The house’s pièce de resistance, and one that many French Bulldog enthusiasts aspire to see, is a magnificent painting known as “Capriccio,” created in the 1930s by Rex Whistler. It is the largest canvas painting in the U.K., some 58 feet long, its proportions giving the impression of a mural.

It is a trompe-l’œil (an art technique that uses realistic imagery to create the optical illusion that the depicted objects exist in three dimensions) seascape painting that fills a whole wall of the dining room with an imagined scene of Italianate churches, castles, Snowdonian mountains and a complete harbor wall, with tricks of perspective that means the scenes appear to change when seen from different parts of the room. For diners sitting on the “wrong” side of the long dining table, the picture provided a good conversation piece. 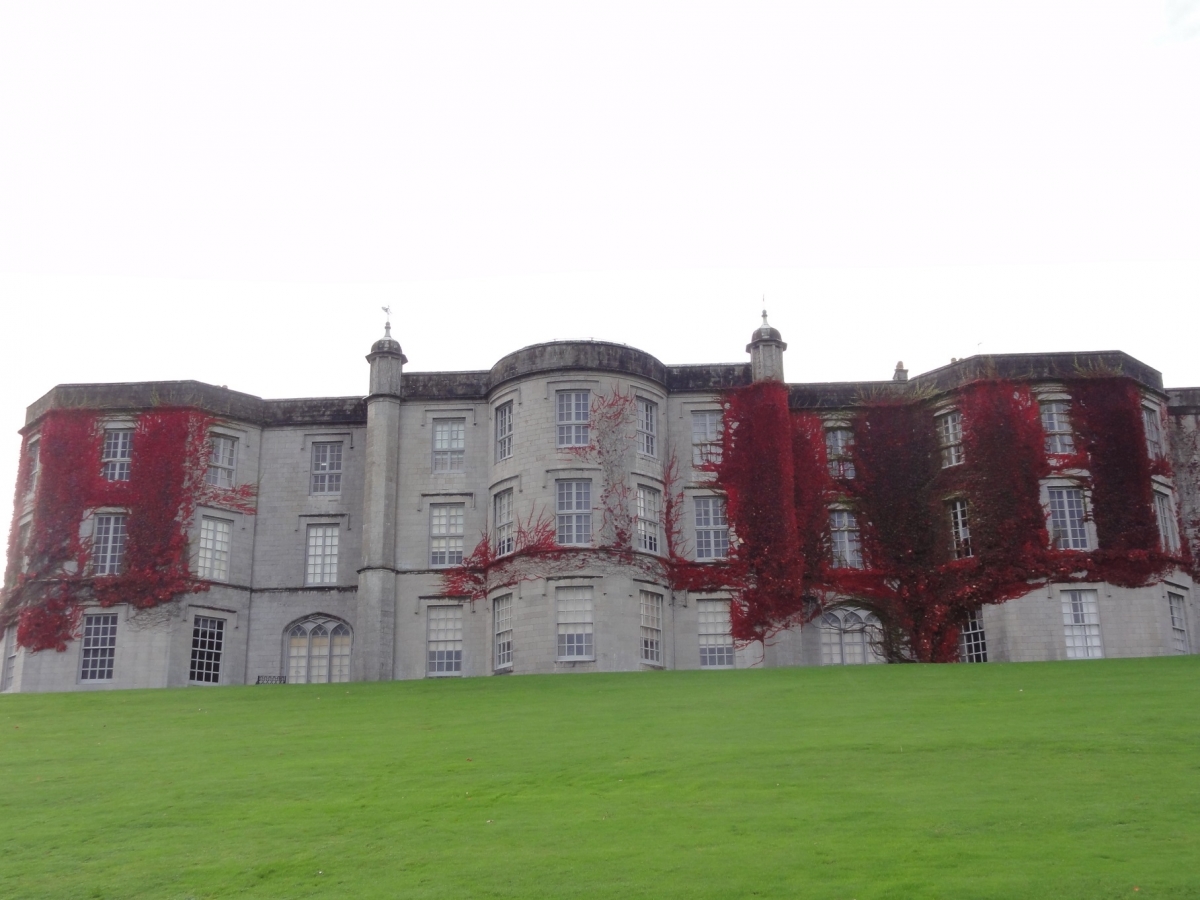 Rex Whistler was born in 1905. In his relatively brief career, a series of witty, story-telling murals had established Whistler as a singularly figurative artist. He was accepted for the Royal Academy School but disliked the regimen and was sacked for incompetence. From there he went on to study at the Slade, and on leaving the Slade embarked on a dazzling career. He moved with and painted many members of London society, including Edith Sitwell, Cecil Beaton, the Mitfords (two of whom became supporters of Hitler) and others, and along with them he was a member of the deliberately fey set known as the “Bright Young Things.”

It was at this time that Whistler met the 6th Marquess of Anglesey, who was Lord Chamberlain to Queen Mary. He was surprisingly unstuffy, an accomplished home-movie maker and had a very Bohemian outlook on life. Whistler would have been the obvious choice to fulfill Anglesey’s commission.

Whistler’s personal story is one of original talent, unrequited love for the Marquess’s daughter, Lady Caroline, whose portrait he painted many times, and a tragic death at age 39 when he was killed in action on his first day in the Second World War. His pièce de resistance remains unfinished. It could be said that the backdrop to his story is Plas Newydd.

The picture extends to the walls on either side, giving an impression of further length to the room. Whistler’s romantic feelings for Lady Caroline are echoed on the left side and include a depiction of Romeo and Juliet in which the young Whistler (Romeo) languishes beneath the balcony of Lady Caroline (Juliet). The reality, though, is that he could never have Juliet, and he contents himself as the gardener on the picture, sweeping leaves.

The right side is filled with expressions of Whistler’s humor, most notable being the family’s pet dogs. It is this side that French Bulldog enthusiasts and dog art historians travel to Plas Newydd to see. The Pug stands on a book in order to reach the top step to get a better view of all that is going on, and by its side the Marchioness of Anglesey’s glasses and her smoldering cigarette end hang over the step. 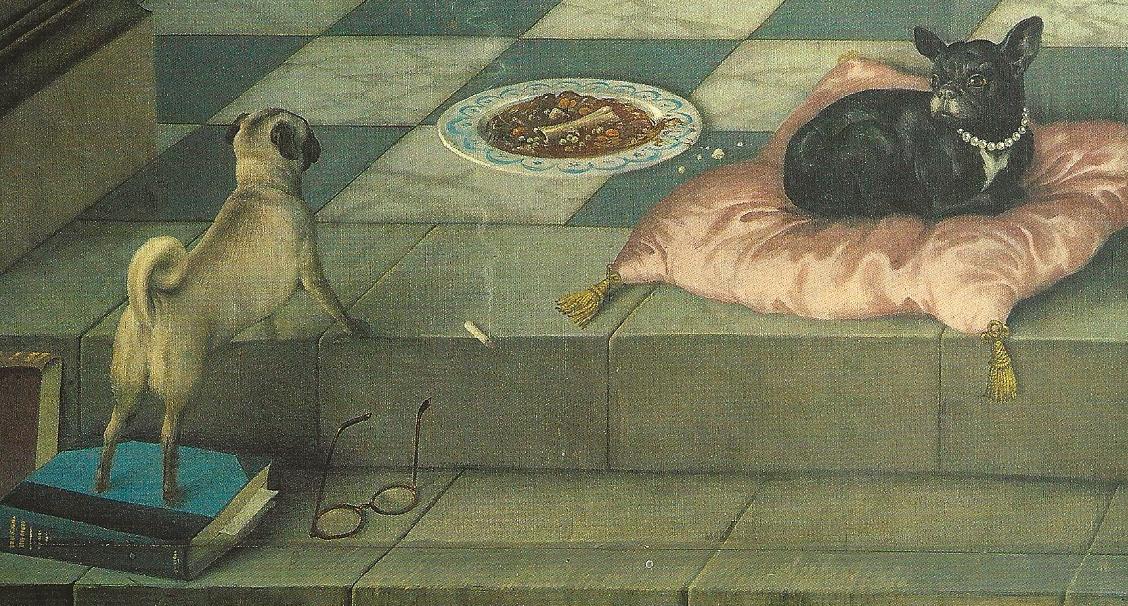 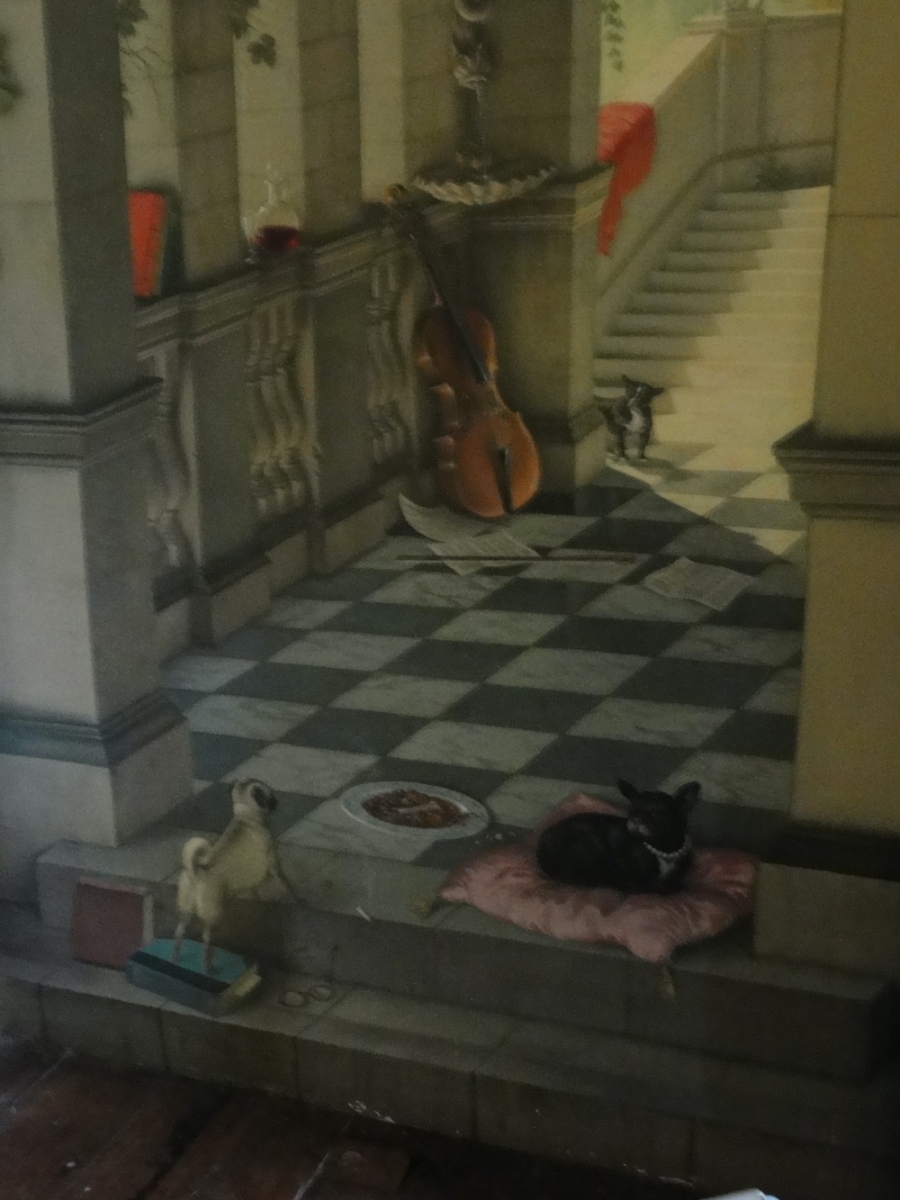 To the Pug’s right is the pampered French Bulldog Cheekie, resplendent in a real pearl collar and lying on a pink gilt tasselled cushion. Cheekie’s back is turned to a bowl of stew, for he only eats best steak. The Pug lacks the courage to move any closer to the food. At the bottom of the stairs, peeping round the column, is the French Bulldog Zinnia, named after Lady Rose’s favorite flower, surveying all that is going on.

The story Whistler’s masterpiece has to tell only adds to its everlasting appeal.

The Marchioness of Anglesey was an enthusiastic French Bulldog owner and joined the French Bulldog Club of England in 1934, quite possibly at the time she had Cheekie. She and her third daughter, Lady Elizabeth, selected a French Bulldog following a visit to Crufts. Lady Rose was a devotee of French Bulldogs all her life and for many years was Patron of the club.

Her first was Zinnia; her husband John, the second son of Lord Aberconway, bought her second, Dinah, which was followed by Zsa Zsa, Zellie and others, and she owned Mabel at the time of her death in 2005 age 86. For much of her life she lived a colorful lifestyle in London. There she moved with the avant-garde set and was a regular visitor to the Colony Club in Soho, where she mixed with Francis Bacon, Lucian Freud and others. She owned a successful floral business and created the floral displays for Princess Margaret’s wedding.

Researching the family, Simon Parsons discovered that the Anglesey involvement with the French Bulldog goes back to the beginning of the 20th Century to a dog called Towse owned by the 5th Marquess. Towse was the sire of a bitch called Fille d’Eve, and all today’s dogs are descended from her.

The 5th Marquess was notable for squandering his inheritance on a lavish social life. Obsessed with the theatre, jewels, furs and exotic costumes that he wore, he accumulated massive debts. The trustees called a halt and enforced a grand sale of all his assets, and he retired on a small income to Monte Carlo, where he died age 29.

It gave the 7th Marquess a lot of pleasure when I asked him to write the foreword to my book, “The French Bulldog: Heritage and Art.”

© Dog News. This article may not be reposted, reprinted, rewritten, excerpted or otherwise duplicated in any medium without the express written permission of the publisher.
Sat, 11/20/2021 - 1:28pm