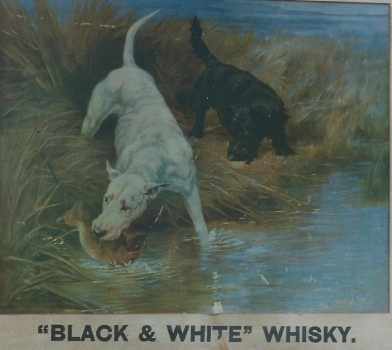 Celebrating the holidays this year may be very different from times past. For many it will just be good food and a quiet drink with close family or friends. So here’s a “celebration” of items that are in one way or another drink related. Cheers!

“The dog made me buy it,” the saying goes. Indeed, a book with that title was published in 1990, and the words are no truer than when it comes to advertising.

Leading the field for booze has to be Buchanan’s Black and White Whisky, founded in the 19th Century by James Buchanan and in the early years known as House of Commons Scotch Whisky. Buchanan was an ardent animal lover, and one story goes that he was returning from a dog show in the closing years of the 19th Century when he conceived the idea for the now-famous trademark.

The early dogs were a black and a white Scottish Terrier, or probably more accurately a black and a white terrier of Scottish origin. As the years went on and the Scottie and Westie became established breeds with their own defining characteristics, these two became the motif we all now know and which is still used today. 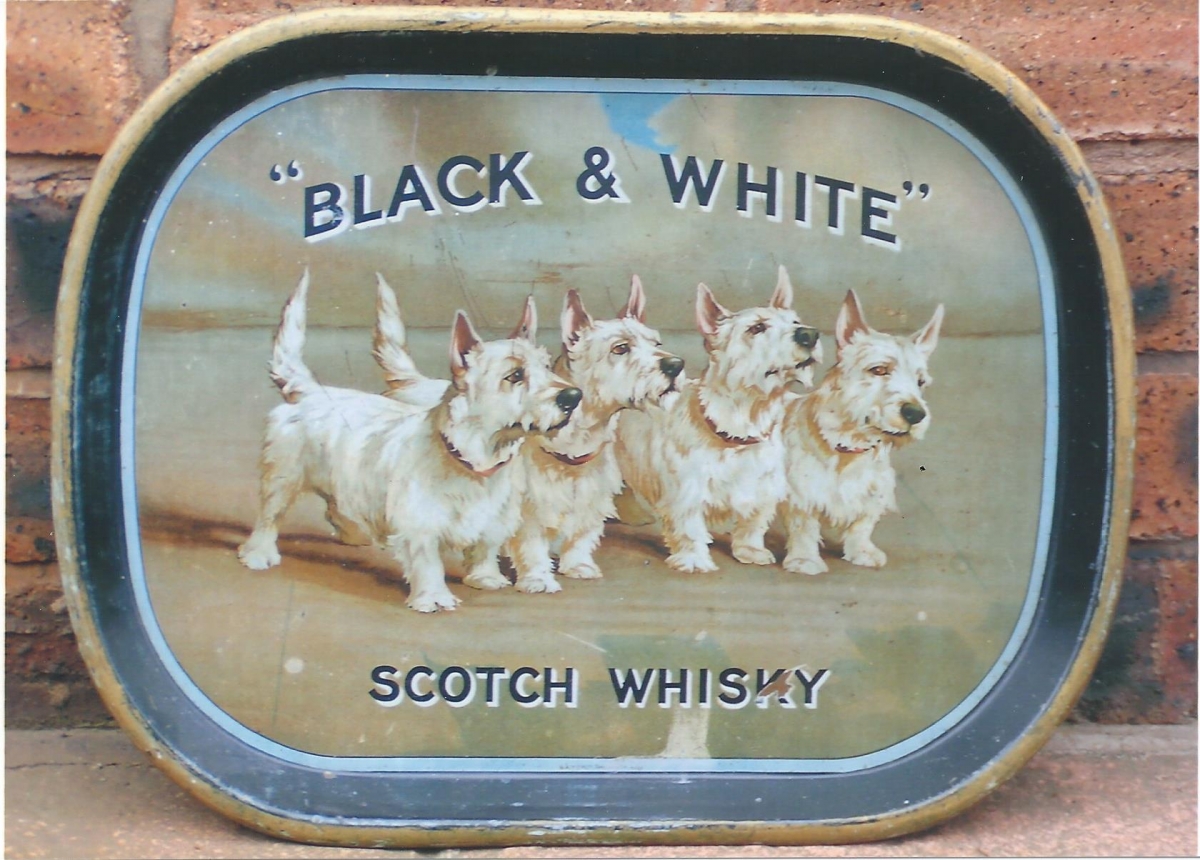 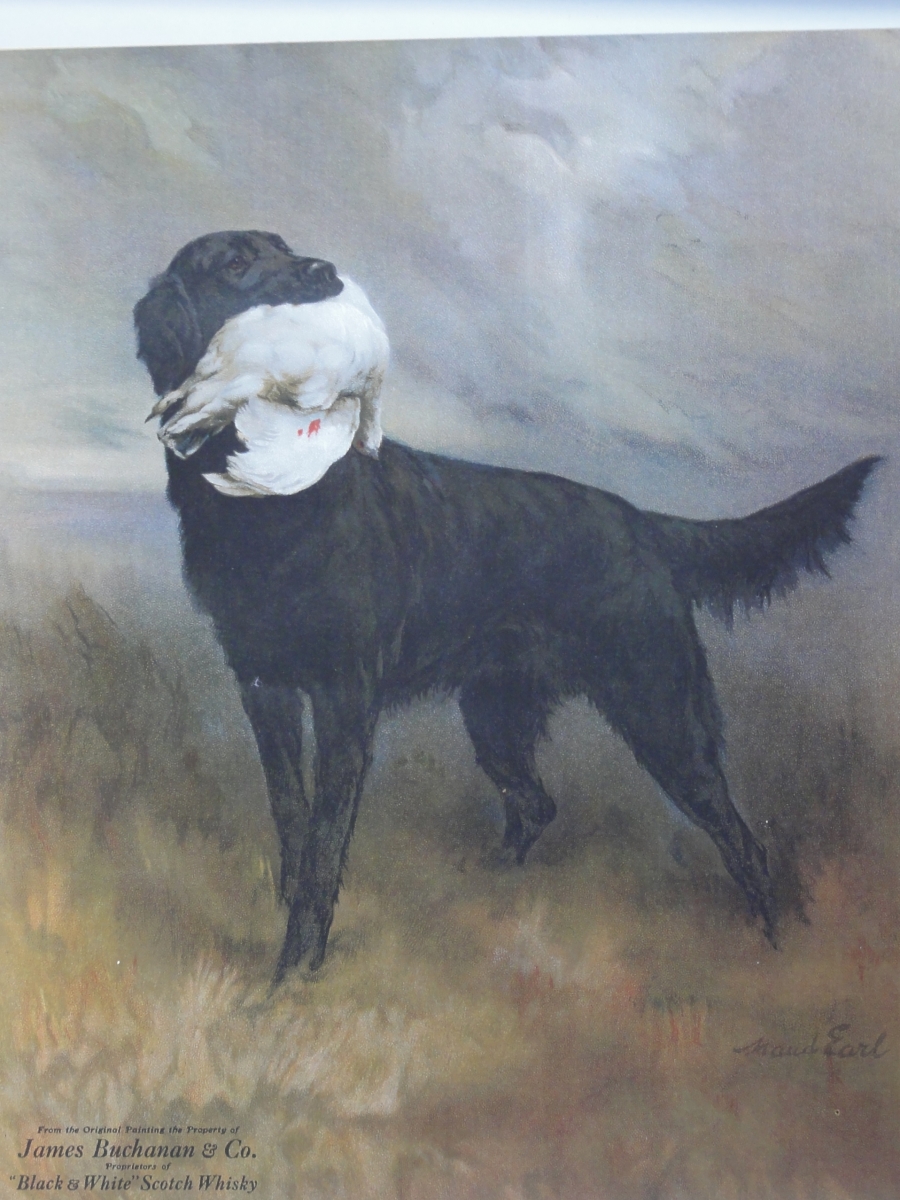 In the years prior to World War I, black and white images other than a Scottie and Westie were used. These included a black Flat-Coated Retriever carrying a white Ptarmigan, a black Scottie behind a white Bull Terrier that has just caught a rat, a white and black Newfoundland with a black Scottie, and – deviating from the black-and-white theme – a row of four Westies known as “The Highland Light Infantry” on a bar tray. Most, though, were in the form of prints for hanging in bars, or reproduced in the company’s magazine advertisements. All those pictured here are from paintings by Maud Earl completed between circa 1912 to soon after the outbreak of war and her departure to America, where she made her home. All are almost as rare as the proverbial “hen’s teeth.”

A. Alexander & Co. was a renowned Scotch whiskey blender situated in Leith just outside Edinburgh. Its flagship brand was Dandie Dinmont Whisky, and the company registered the trademark for the brand in the 1940s. They went on to sell the product in the export market. Unlike Black and White, their marketing merchandise was limited to just a few items, including jugs, ashtrays, bar trays and a rather fine rubberized model for display at the back of the bar. All are rare, and a model similar to the one illustrated here recently sold for more than £500 on eBay. 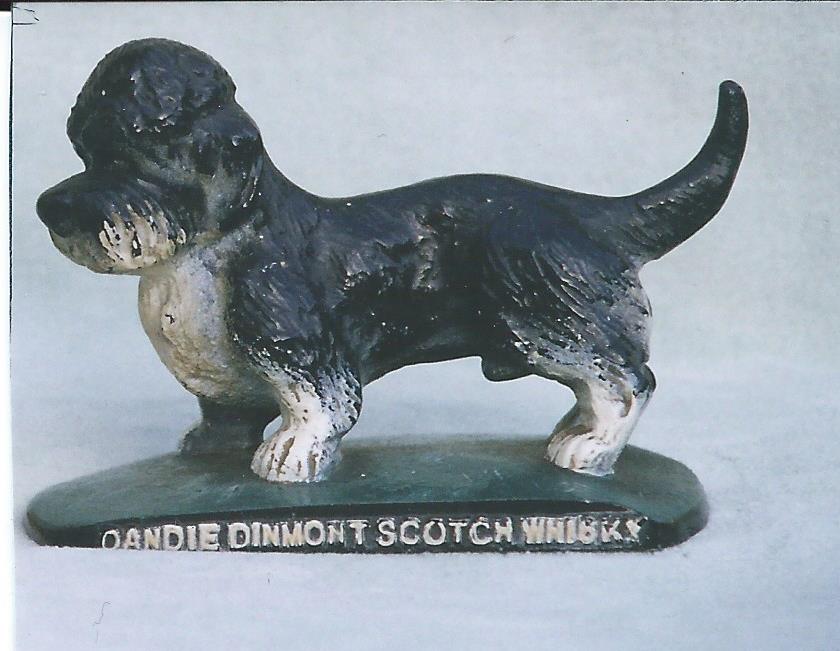 While not advertising, pottery barrels were frequently seen behind bars in inns of old for serving spirits on tap, like this beautifully mid-19th Century one decorated with a Dalmatian (below left). 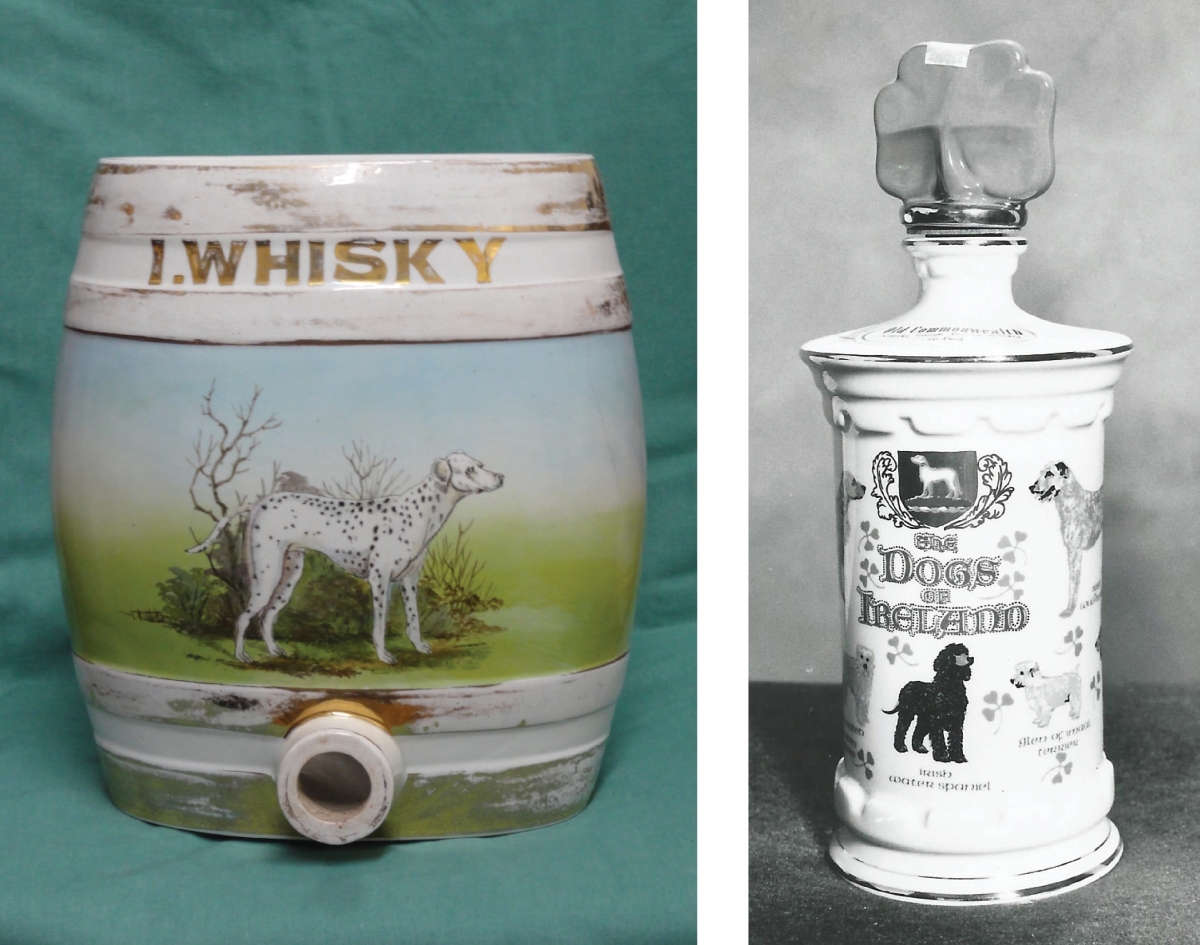 Around the 1980s, the Commonwealth Distillery Co., based in Louisville, Kentucky, produced a limited-edition series of Old Commonwealth Kentucky Bourbon Whiskey decanters on Irish themes. These included “Post Stamps of Ireland,” “Flowers of Ireland,” “Irish Charm” and “Dogs of Ireland.” It is not clear what the editions were limited to; I may be wrong, but suspect it was on numbers sold rather than a specific number. The Dogs of Ireland decanter (above right) featured all the native breeds – Irish Wolfhound, Irish Water Spaniel, Irish Terrier, the two Irish Setters, Kerry Blue Terrier, Glen of Imaal Terrier, Soft Coated Wheaten Terrier and Kerry Beagle. The finial on top of the stopper was a shamrock leaf. Many who bought a decanter were disappointed to discover that it came empty!

Two outstanding beautiful items for holding drink are the carved ivory tankard and claret jug. The large, intricately carved ivory tankard was made in Germany in the mid-19th Century. Two seated dogs are on the lid, and there is a continuous band of running stags and does around the tankard. The rest is copiously carved with leaf work to replicate a typical German forest scene of the period. It was offered in an auction in 2019 by Hutchinson and Scott estimated at £5,000-8,000. 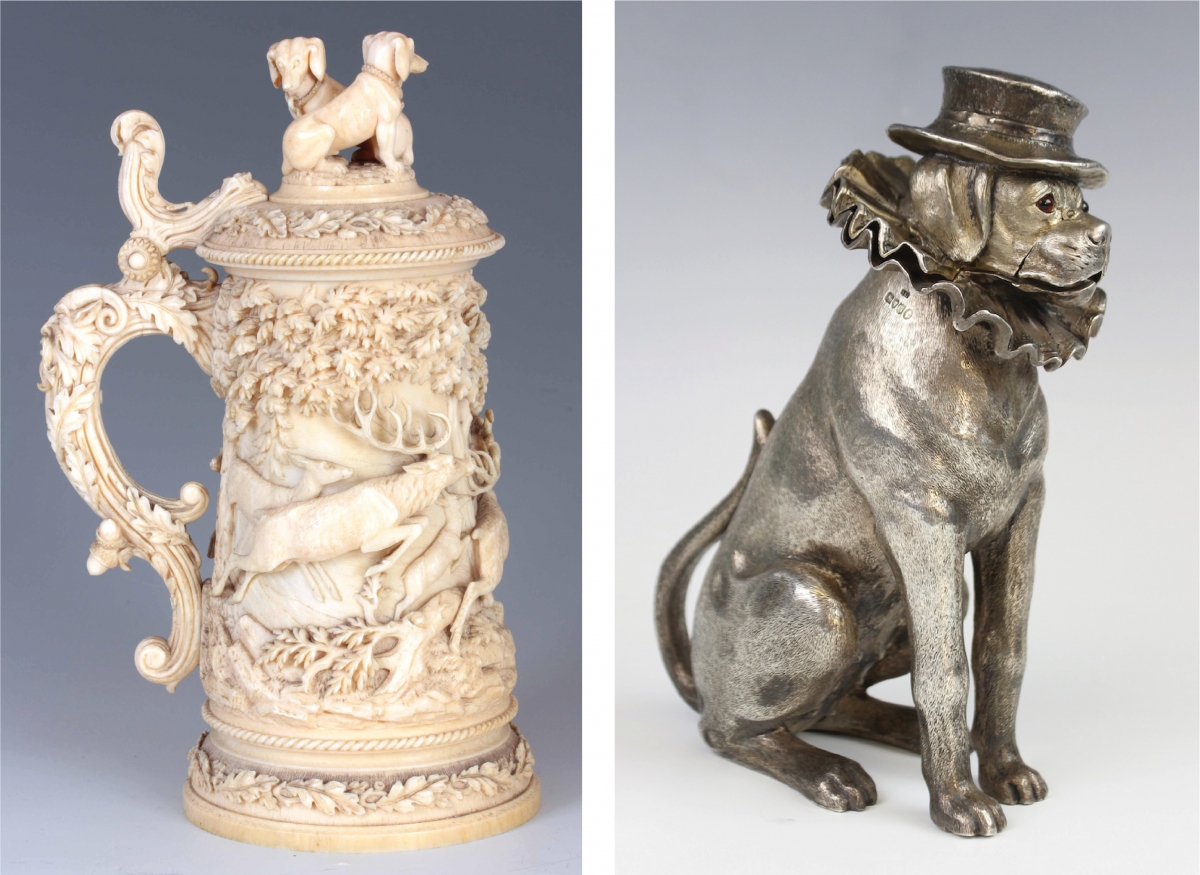 The silver claret jug stamped for Sampson Mordon, London, and dated 1882 is in the form of Toby, usually depicted in art, as is the case here, as a Pug. Toby was one of the characters in a Punch and Judy show, which has its roots in 16th-Century Italian “commedia dell’arte,” but is often associated with traditional British seaside culture and was once a great favorite with children.

Performances consisted of a sequence of short scenes, each depicting an interaction between two characters, most typically Mr. Punch and his long-suffering wife Judy, who falls victim to his slapstick. In the show Toby was often played by a real-life small dog that sat on a platform in front of the performance. 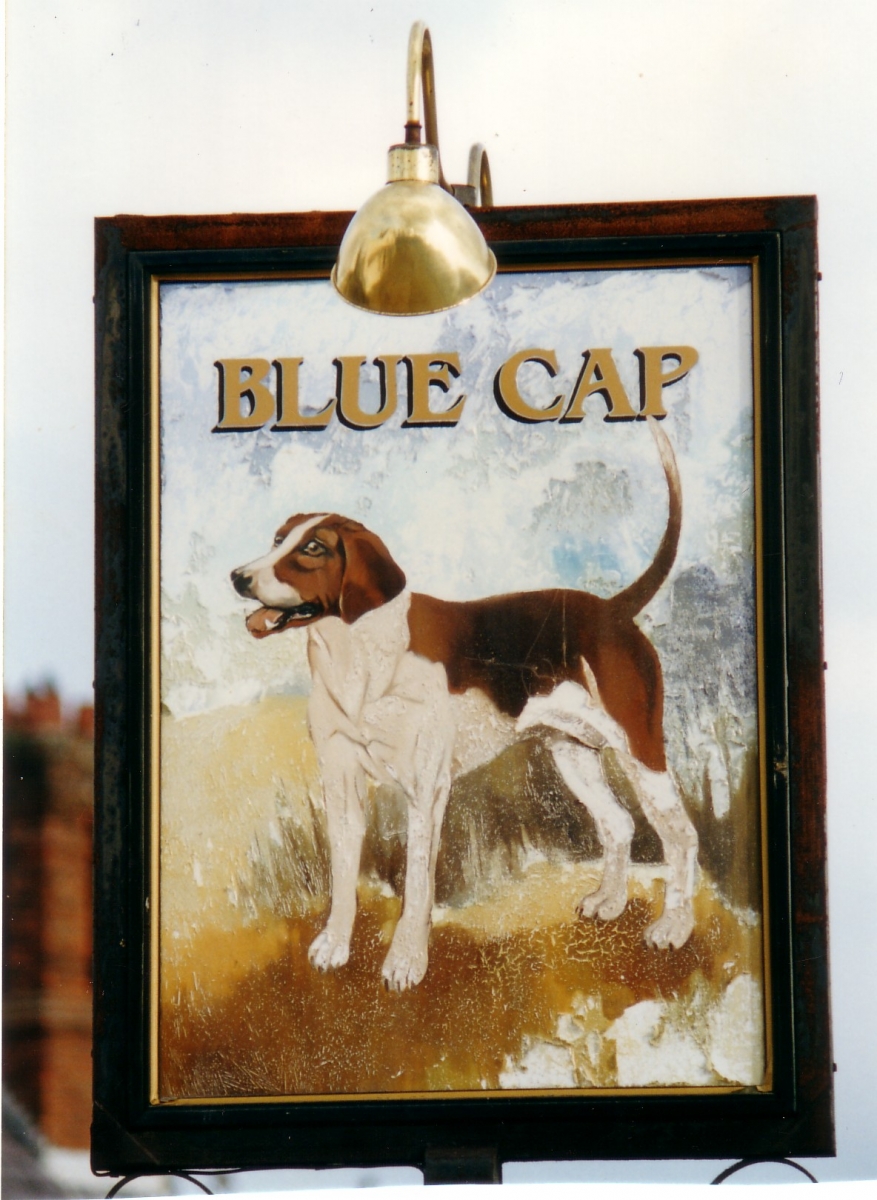 The claret jug, hinged at the neck and with amber-colored eyes, was offered by Trevanion and Dean with expectations of £8,000 to £12,000. A bidding war developed between the internet, telephones and those in the room, with the hammer falling at £30,000.

Eye-catchingly hand-painted, often naively so, decorative name signs are a tradition outside inns and public houses. The subject matter is vast, with dogs being plentiful.

The old Bluecap sign that once hung outside the Bluecap Inn beside a main road in Cheshire was a local landmark. Bluecap was a member of the first pack of Foxhounds to be founded in the English county of Cheshire. He is immortalized in hunting legend for winning a race against hounds of the Quorn hunt in 1763.

John Smith-Barry of the Cheshire was challenged to a bet by Hugo Meynell of the Quorn, one of the most influential men in developing fox hunting, to a race between two of each other’s hounds. The race was held over a four-mile course at Newmarket, with Meynell’s hounds favorites at odds of 7-4. Bluecap won easily, and his daughter Wanton came second.

© Dog News. This article may not be reposted, reprinted, rewritten, excerpted or otherwise duplicated in any medium without the express written permission of the publisher.
Thu, 12/10/2020 - 6:32am