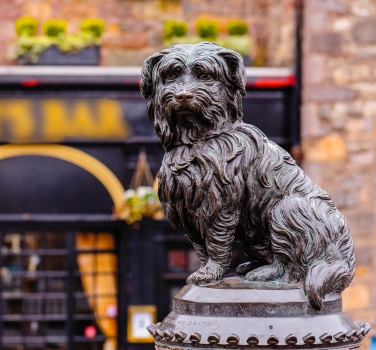 Greyfriar's Bobby, who modern historians contend was likely a Dandie Dinmont, not a Skye Terrier, as legend claims.

Images of the dog honoring bravery or perpetuating legends can be found in public places all over the world.

Here is just a small selection from five countries, starting with “Monument to Drum Dogs.” It is situated in the city of Kaliningrad (previously known as Königsberg) in Russia, a province of that name sandwiched between Poland and Lithuania that was at one time the East Prussian capital.

The tradition dates from the 1866 Battle of Königgrätz, where troops of the Prussian 43rd Infantry Regiment overran the drum wagon of the Austrian 77th Infantry Regiment, whose dog, a Saint Bernard named “Sultan,” had been shot. The East Prussian soldiers took the drum wagon back on their victorious return to their base in Königsberg, where it received much attention. 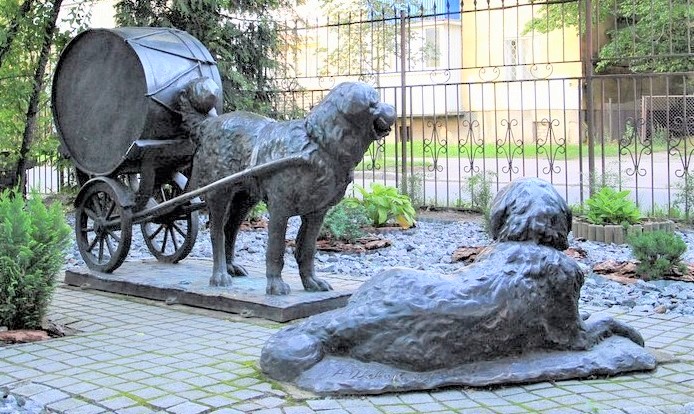 There the kettle drum became a tradition with the Prussian Infantry, with dogs assigned to the regiment named “Sultan” in honor of their Austrian predecessor. Until after World War I, the drum dog still participated in parades and processions of the castle guard.

Following the establishment of the Weimar Republic, the soldiers asked for restoration of the drum-dog tradition. A businessman donated a Saint Bernard to the newly formed 1st (Prussian) Infantry Regiment. The tradition ended when the last dog was killed in April 1945, shot by his caretaker as the Red Army encircled Königsberg. He then shot his wife and their children before turning the gun on himself.

The lying dog with its paws crossed was created by Luke Kite at the British Ironworks Centre to honor and celebrate police dogs. It is positioned outside Hindlip Hall, a stately home in the Worcestershire countryside, with connection to the Gunpowder Plot of 1605, a failed attempt to assassinate King James I and blow up the House of Lords during the State Opening of Parliament. Today the hall is the headquarters of West Mercia Police. 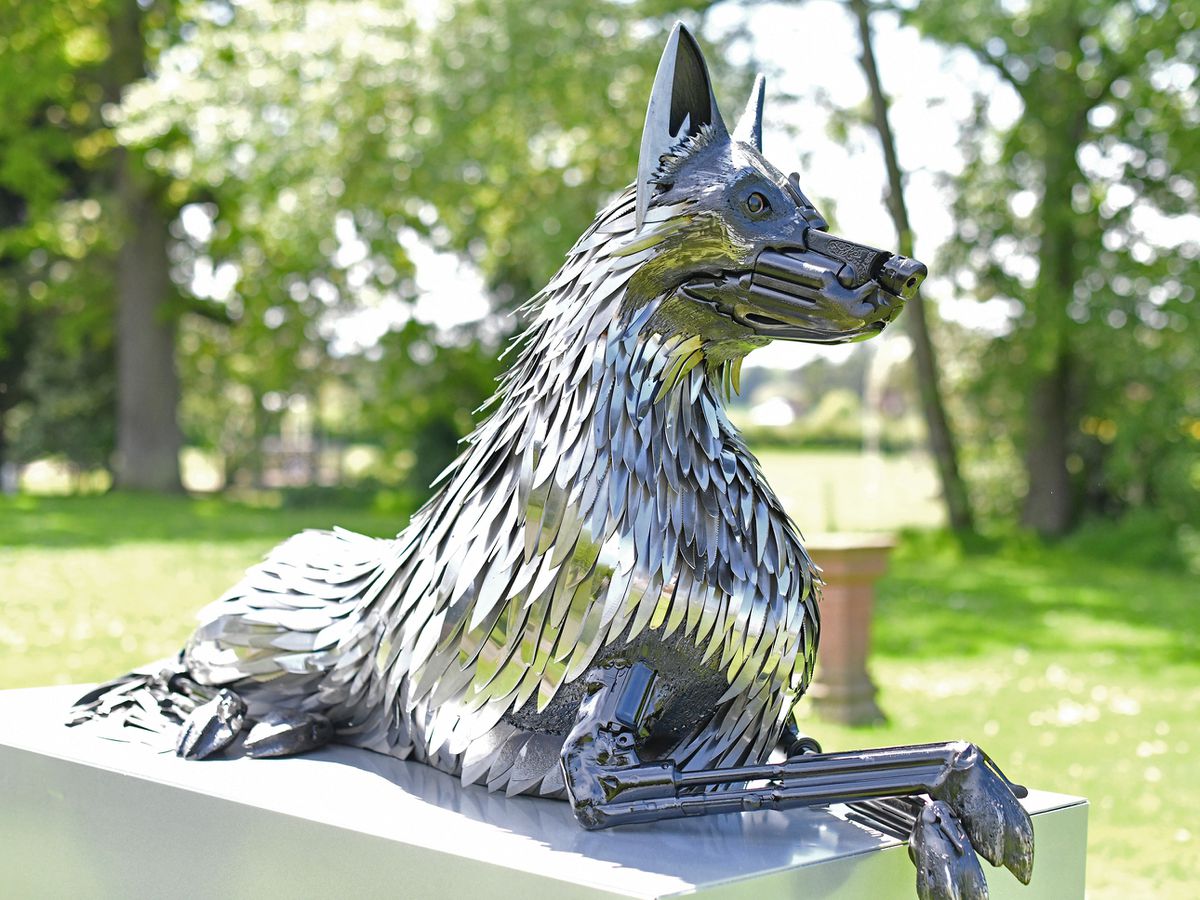 The statue is created from apprehended knives and decommissioned guns as well as objects that relate to the lives of the dogs, such as dog bowls and whistles. Police dogs are a vital part of policing, and the statue acts as both a lasting reminder of the great job police dogs do for the community, while commemorating those dogs that have been injured or lost their lives.

Near the entrance of New York City’s Central Park at East 67th Street, by the Tisch Children’s Zoo, is a bronze statue of a sled dog named “Balto” mounted on a large granite rock. A plaque on the front is engraved with seven sled dogs running through a blizzard. The statue was created by the American sculptor and animalier Frederick Roth, and modelled on a New Hampshire Malamute. 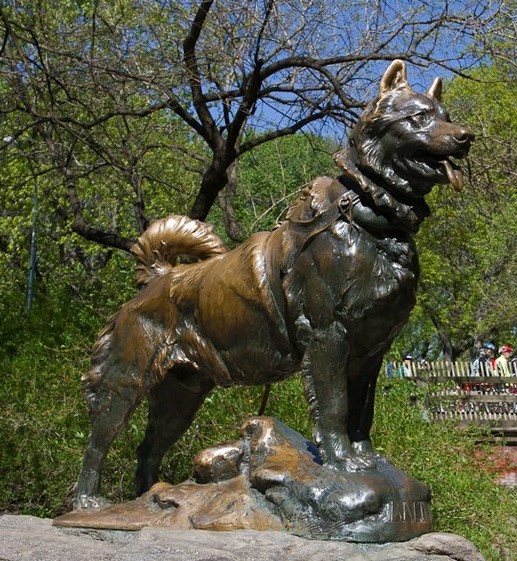 “Balto” achieved fame and received much publicity after he had led a team of sled dogs on the final 50-mile leg of a 675-mile run to Nome, Alaska, in which diphtheria antitoxin was transported from Anchorage to Nenana by train and then by dog sled to combat an outbreak of the disease.

The dog many consider the real hero lead dog of the run was one named “Togo,” which at 12 years old ran 261 miles in total. He was owned and trained by Norwegian expat musher Leonhard Seppala, a failed gold prospector.

“Togo” was born in 1913 and in sled-dog terms didn’t initially show much promise, being small and suffering a throat infection as a puppy. He was given away as a companion but with his ability to escape, returned home. He would frequently escape confinement to race after Seppala when he was conducting training or running errands. 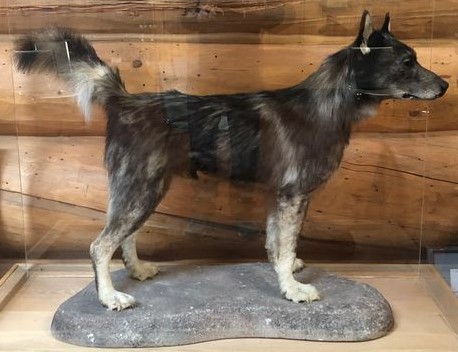 Seppala noticed the dog’s determination and knack for finding the shortest distance between two points, and “Togo” was added to the team, eventually becoming lead dog. The fame of “Balto” was an unfortunate, though unwitting outcome. The serum run inspired the most celebrated dog sled race in the world, the Iditarod, and the stuffed remains of “Togo” are at the headquarters of the Iditarod in Wasilla (above). 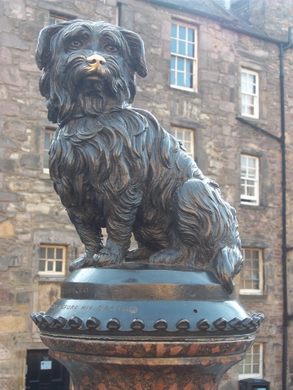 On a street corner in the older part of Edinburgh is a granite fountain with a bronze statue of a sitting dog atop. It was commissioned by Lady Burdett-Coutts, member of a wealthy banking family and philanthropist, and sculpted by the Scottish sculptor William Brodie, whose most famous work is probably the “Greyfriars Bobby Fountain.”

The best-known version of the “Greyfriars Bobby” story is that “Bobby” belonged to John Gray, who worked for the Edinburgh City Police as a night watchman. When he died in 1858, he was buried in Greyfriars Kirkyard. “Bobby” then became known locally, allegedly spending the rest of his life sitting on his master’s grave for what is said to have been 14 years.

It has long been thought that “Bobby” was a Skye Terrier. However, a new book concludes that “Bobby” is more likely to have been a Dandie Dinmont Terrier, a breed immensely popular in Scotland at the time, with 60 breeders in the Edinburgh area.

Just a short distance south of Beddgelert, an idyllic village that lies in a valley at the foot of Snowdon, the tallest mountain in Wales, is the village’s most famous historical feature: Gelert’s grave. According to legend, the stone monument nestling beneath a tree marks the resting place of “Gelert,” the faithful hound of the 13th Century Llewelyn ap Lorwerth, Prince of North Wales. Nearby in a stone-built enclosure is a bronze statue representing Gelert.

Allegedly, one day the Prince went hunting without Gelert, who was unaccountably absent. On Llewelyn’s return, Gelert joyfully sprang to meet his master, stained and smeared with blood. Hastening to find his son, the alarmed Prince saw the infant’s cot empty, the bedclothes and floor covered with blood. The frantic father plunged his sward into the hound’s side, thinking he had killed his heir. The hound’s dying yell was answered by a child’s cry. Llewelyn searched and discovered the boy unharmed, but nearby lay a body of a wolf that Gelert had killed. The Prince, filled with remorse, is said to have never smiled again. He allegedly buried Gelert in the spot where the stone monument now is. 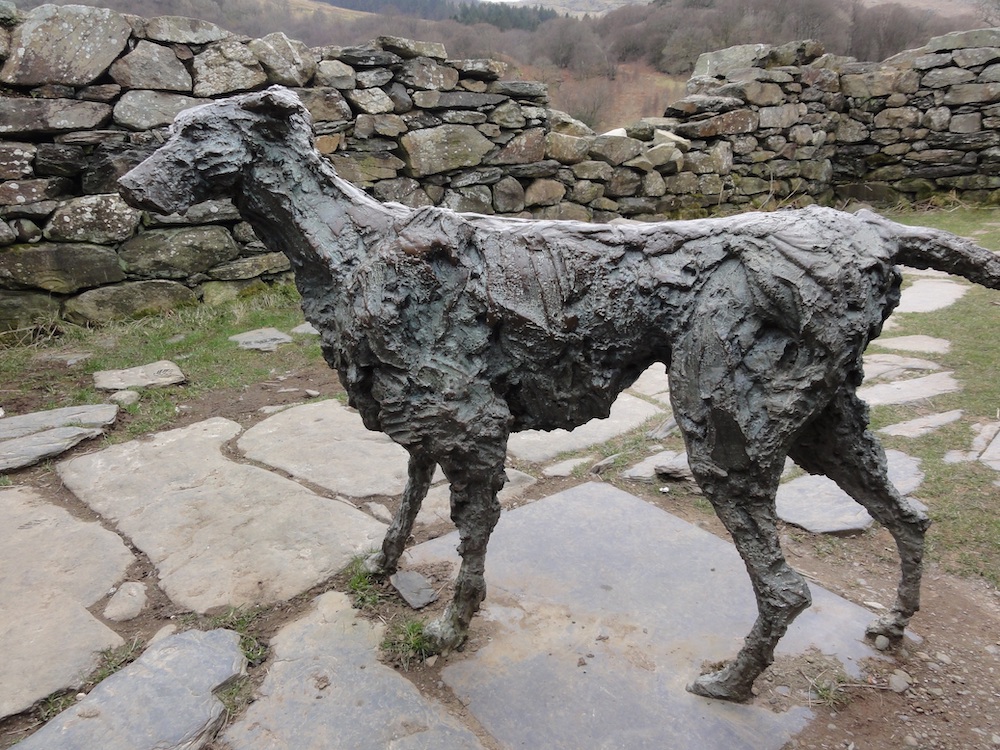 Never let the truth stand in the way of a good story, and variations of this story are told over and over again in many different lands, about many different kinds of dogs.

The “grave” mound is ascribed to David Pritchard, landlord of the Goat Hotel in Beddgelert in the 18th Century, who connected the legend to the village to attract tourism. Nevertheless, it is a good story that still attracts tourists to this beautiful area of a country known for its spectacular vistas, and it tugged at the heartstrings of the Victorian who relished the melancholy.

© Dog News. This article may not be reposted, reprinted, rewritten, excerpted or otherwise duplicated in any medium without the express written permission of the publisher.
Fri, 09/16/2022 - 11:51pm