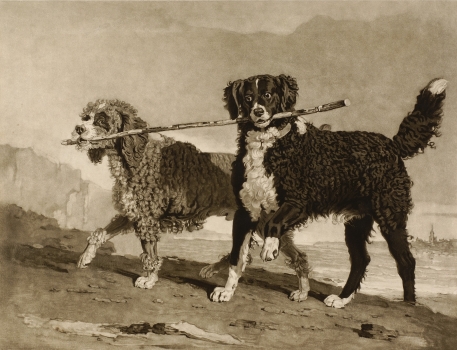 The late-18th-Century image that graces the catalog cover.

The British Sporting Art Trust was established in 1977 following concerns expressed by some that sporting art was not fully represented in public art. Many fine sporting paintings were going to America and a few other countries and commanding high prices. The aim of the Trust was to promote interest in the genre and build a representative collection for public exhibition.

The subject had been highlighted earlier when in 1964-65 wealthy American Paul Mellon, owner and breeder of thoroughbred racehorses and one of the greatest American philanthropists of the 20th Century, exhibited his collection at the Royal Academy. As a London art dealer remarked: “It took an American collector to make the English look again at their own paintings.”

Mellon donated 30 works through the British Sporting Art Trust to the Tate Gallery in 1979. These were followed in 1982 by an additional 17 works bequeathed by Mrs. Ambrose Clark, the English-born widow of Singer Sewing Machine Company heir Frederick Ambrose Clark, who was passionate about all things equestrian.

Sporting art is traditionally understood to refer to a genre of art that encompasses country pursuits, predominantly in the 18th and 19th centuries. Known originally as “animal pictures,” they documented the popular rural sports of the time, including foxhunting, game shooting, fishing, horseracing and baiting sports.

With industrialization in the late 19th Century, and a population shift from the countryside to towns, sporting art took on a wider meaning, encompassing sports beyond country pursuits – from archery to motor racing, cycling to rugby.

Our shared history with dogs stretches back to prehistory, when dogs were first domesticated to hunt alongside humans. Over time their roles have evolved, and there are few traditional sporting pastimes where dogs have not played an integral part. Today the major role played by dogs is that of companion.

“The Good Companions: The Many Roles of Our Canine Friends” is the title of the British Sporting Art Trust’s current exhibition, which runs until November 1. Through art and objects ranging from fine paintings to taxidermy drawn from the BSAT collection and public and private loans, the exhibition examines the diverse roles dogs have played in people’s lives from the 16th to 21st centuries. 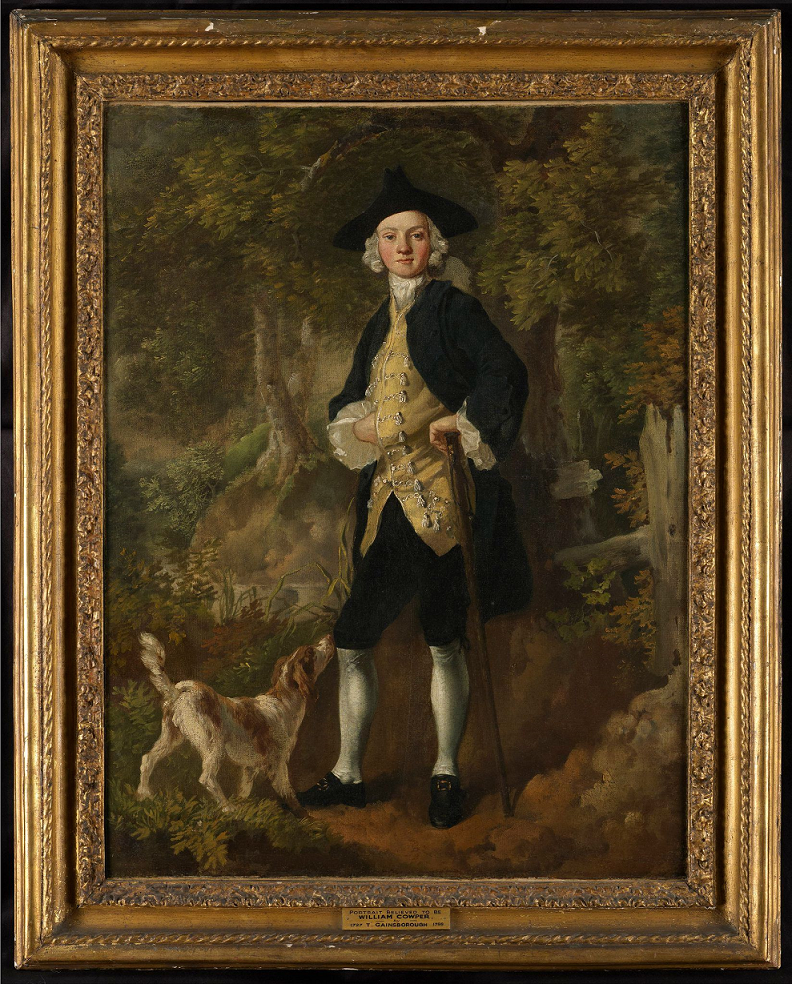 “A Gentleman with a Dog in a Wood” (above), painted by Thomas Gainsborough circa 1746, is the earliest piece in the exhibition. The sitter remains unidentified but is probably one of Gainsborough’s Suffolk patrons. The inclusion of a dog, so popular in portraiture over the centuries, is intended to highlight the owner’s wealth, position as a member of the landed gentry, and as an expression of loyalty or fidelity, depending on the sex of the sitter. 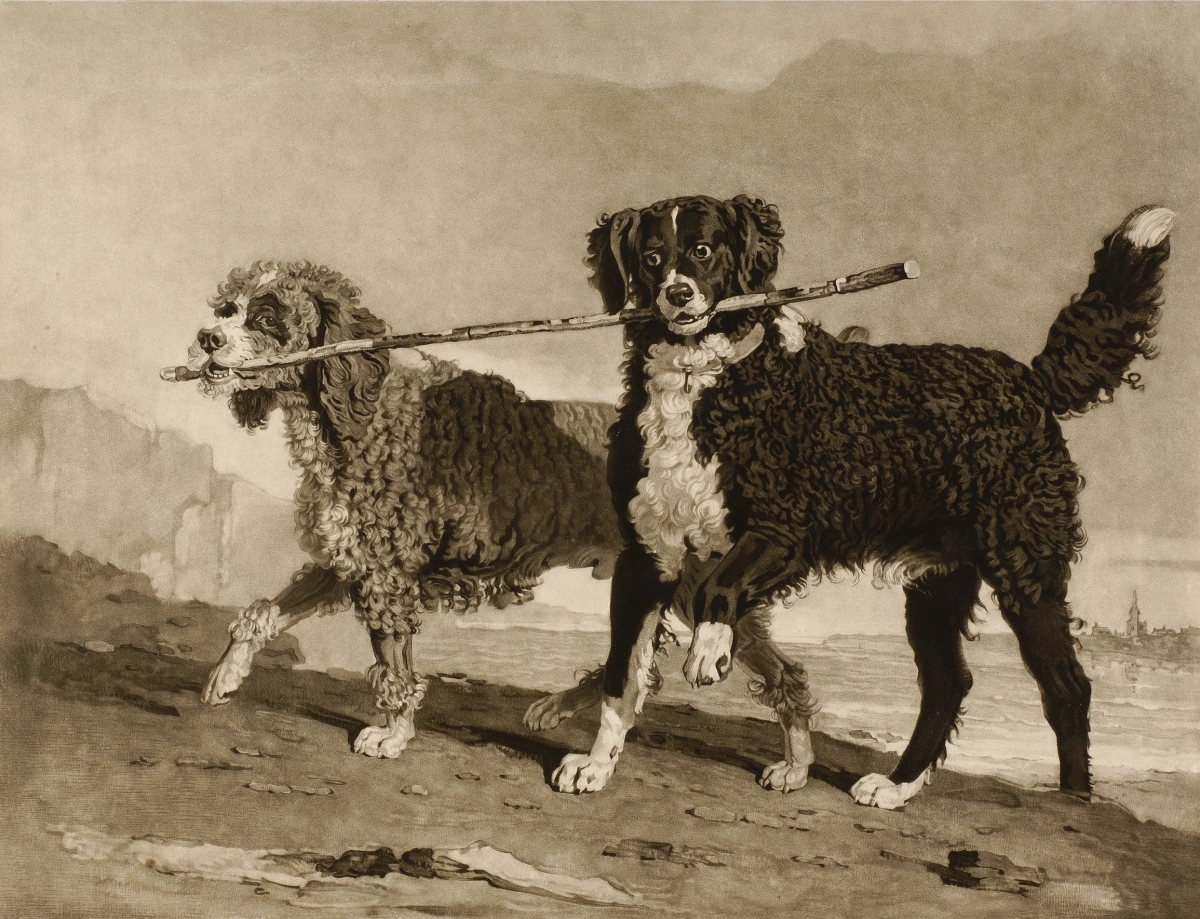 The picture that graces the catalog cover and used to promote the exhibition is after a painting by Ben Marshall and engraved by William Ward (above). It is arguably the most characterful interpretation of dogs ever depicted in art. The two water dogs from the late 18th Century – Diver on the left and Shuckleback on the right – compete for control of a stick. They were owned by Fanny Orby Hunter, daughter of the High Sheriff of Devon and wife of Thomas Orby Hunter, Member of Parliament. 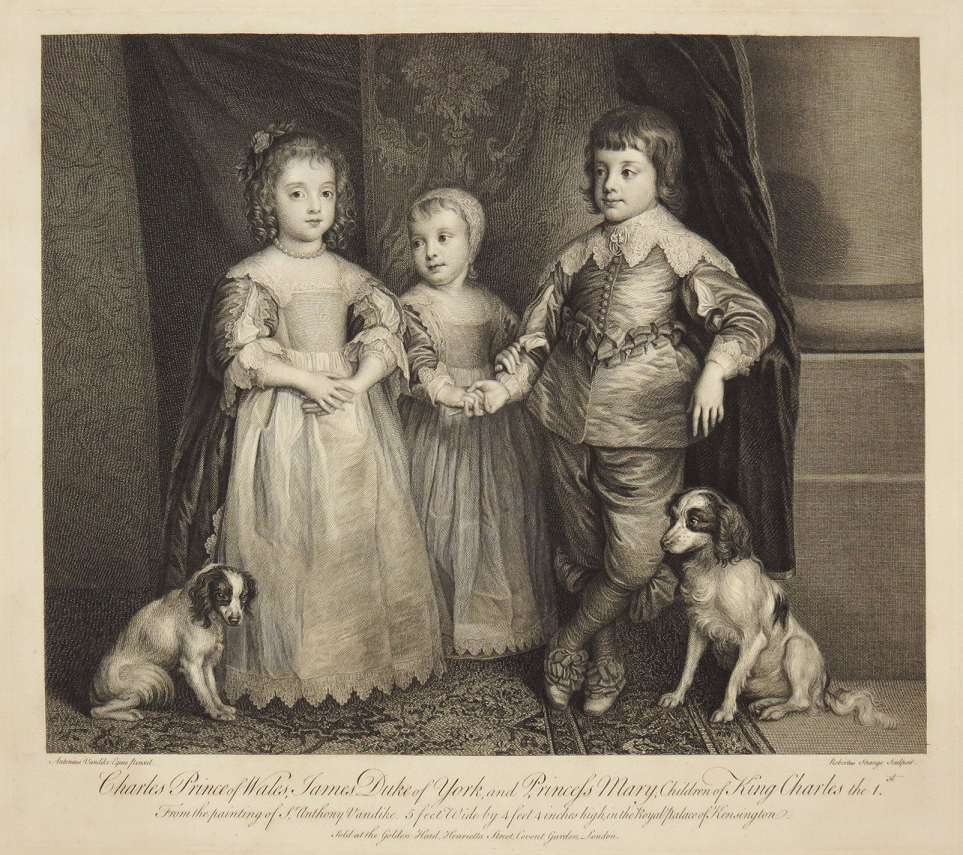 Another engraving in the exhibition, this one by Robert Strange after a painting by Antony Van Dyck, depicts the three eldest children of King Charles I (above). Circa 1790, the children are the future King Charles II, King James II and Princess Mary, mother of King William III. They are accompanied in the portrait by two toy spaniels that were very much loved by members of the royal family. Charles II built Newmarket Palace (now Palace House), and his rooms now display the collection of the British Sporting Art Trust. It is good to see so many engravings recognized for their historical and artistic importance.

Hare coursing is an ancient sport described by Greek historian Arrian as early as 160 AD. He wrote that “true huntsmen do not take out their hounds to catch the creature, but for a trial of speed and a race, and they are satisfied if the hare manages to find something that will rescue her.” Sentiments that held true until the sport was banned in the United Kingdom. 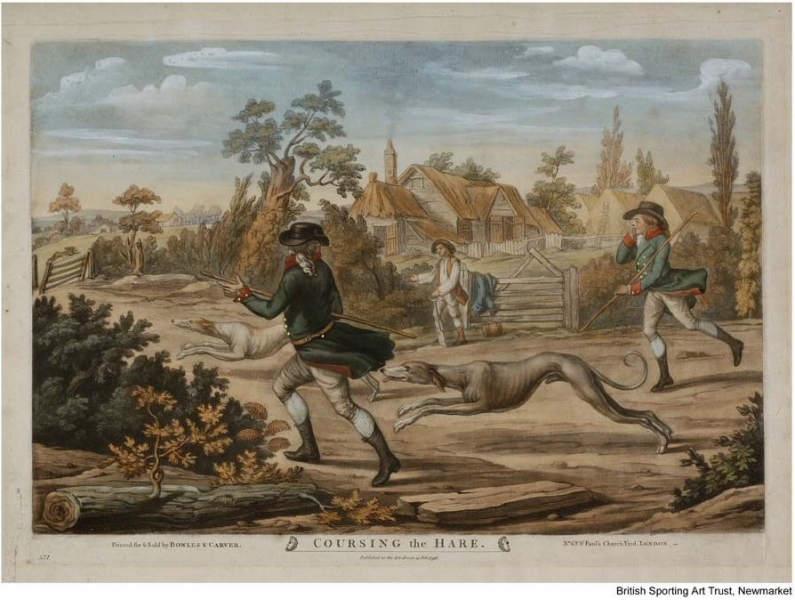 Robert Deighton’s “Coursing the Hare” from 1796 (above) captures all the elements of the sport in the 18th Century – hounds, sportsmen, a yeoman watching, the English countryside, and a church and dwellings beyond. 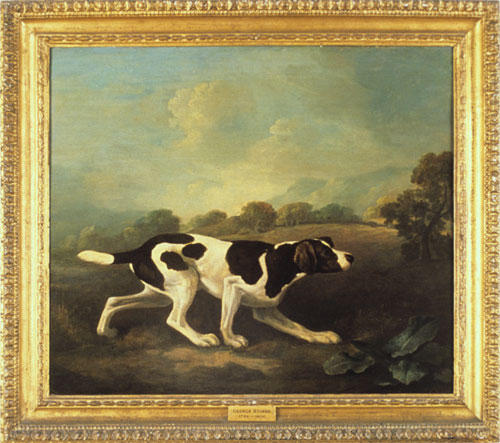 George Stubbs was one of the greatest 18th-Century painters of animals. His painting “The Spanish Pointer” (above) is one of the best known and most reproduced and copied of all dog pictures of the time. He used the painting as a template for other Pointer pictures that followed, and the painting in the exhibition, painted in 1772 for his patron William Wildman, is one such example in mirror image. 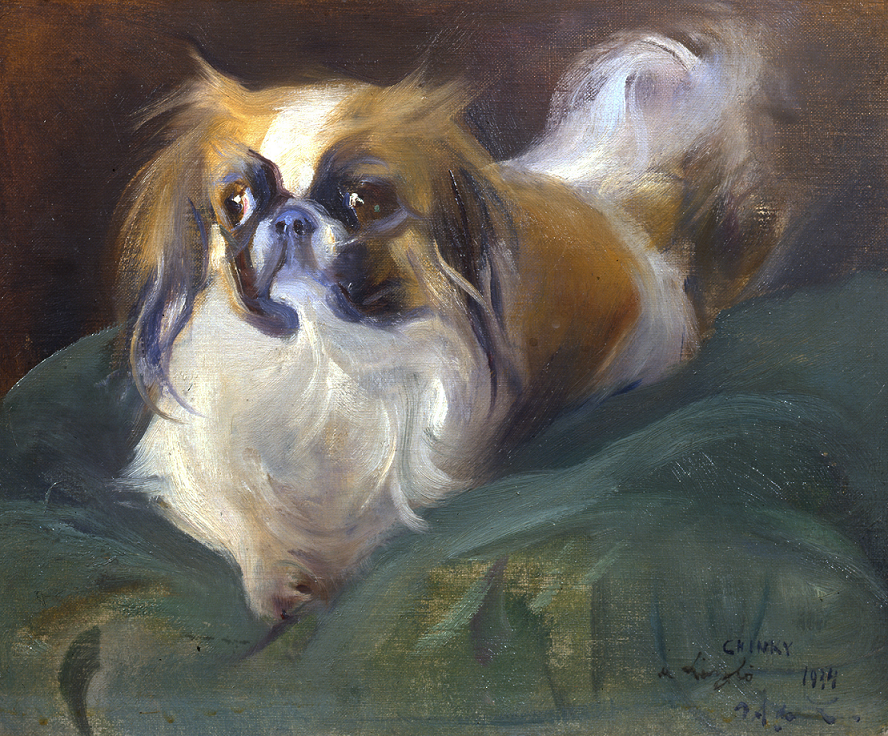 Society and royal portrait artist Philip de László had an interesting life. Born in humble circumstances in Budapest, married into the banking branch of the wealthy Irish Guinness family, he became a British citizen, yet was interned during World War I for letters he wrote to family members in Austria. The family owned a succession of Pekingese, and his portrait of son Stephen’s Chinky (a name that does not meet our modern standards of political correctness!) is a classic pet portrait from the interwar years. 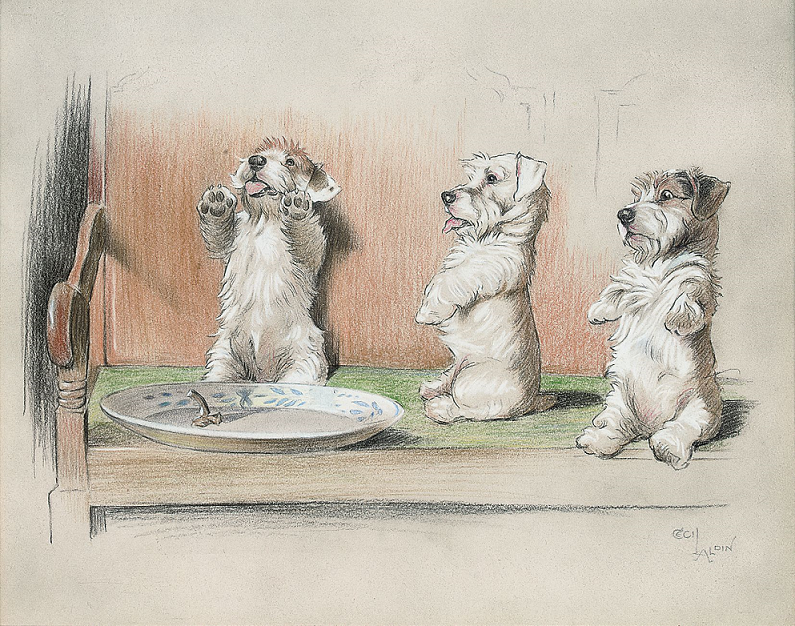 Cecil Aldin was one of the 20th Century’s most popular artists and illustrators of dogs and rural life. An enthusiastic sportsman and a Master of Foxhounds, many of his pictures illustrated hunting. His own pets featured heavily in his work: Micky the Irish Wolfhound, Cracker the Bull Terrier, Susan the Sealyham and others. He worked from life, and the character and personality of his subjects are always at the fore, so evident in his picture of three Sealyhams begging: “For What We Are About to Receive” (above). 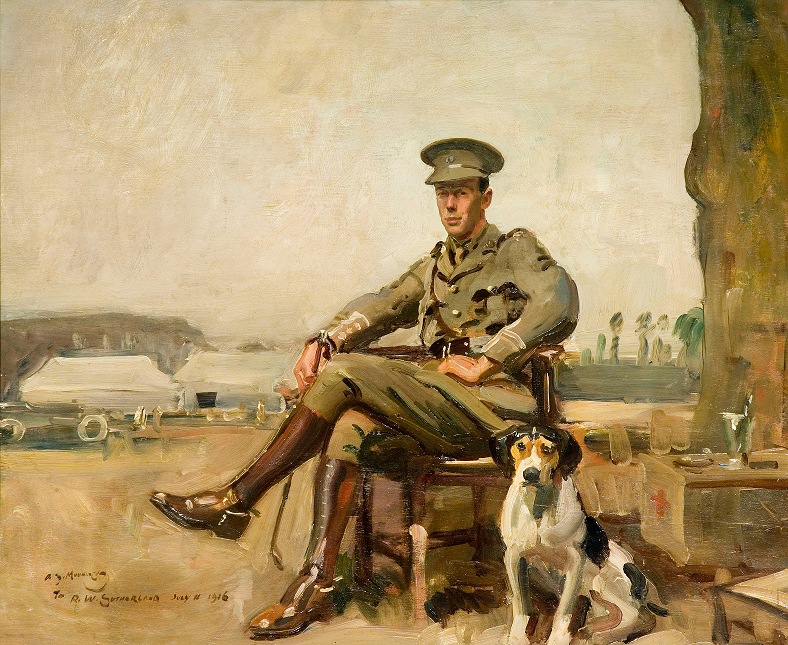 Sir Alfred Munnings was known as one of England’s finest painters of horses and sporting subjects. Assessed as unfit to fight in World War I, Cecil Aldin (at the time a major) got Munnings a civilian job at the remount center in Reading processing thousands of Canadian horses en route to France and often certain death. His talent was employed as a war artist to the Canadian Cavalry Brigade. On July 11, 1916, a few days into the Battle of the Somme, Munnings painted an archetypal officer, Captain R.W. Sutherland, complete with a faithful Foxhound by his side (above).

© Dog News. This article may not be reposted, reprinted, rewritten, excerpted or otherwise duplicated in any medium without the express written permission of the publisher.
Wed, 10/21/2020 - 7:15pm