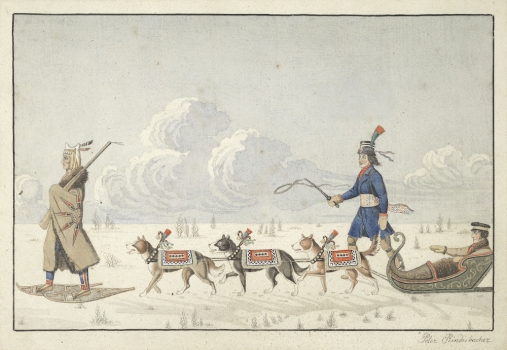 In their Travel and Exploration sale – and with expectations of up to £80,000 – Bonhams in London offer a rare painting from early-19th-Century Canada (above) of an Indian guide and two settlers, one in a dog cariole being pulled by a team of three dogs. It was painted by the Swiss born and trained artist Peter Rindisbacher.

At age 15 with his large family he immigrated to British North America (Canada) via Hudson Bay to Lord Selkirk’s Red River Settlement in Winnipeg, where he continued to paint. His small, detailed pictures found a ready market, enabling him to support his family.

In his crisp and brilliant graphic style, he painted scenes of life on the North American frontier, including views of First Nation tribes that have become an important historical record of the vanishing way of life that occurred in this period and subsequently.

In 1826, after five challenging years in Canada, the family moved south, and Peter eventually settled in St. Louis, Missouri, where he prospered and painted, but died prematurely in 1834. 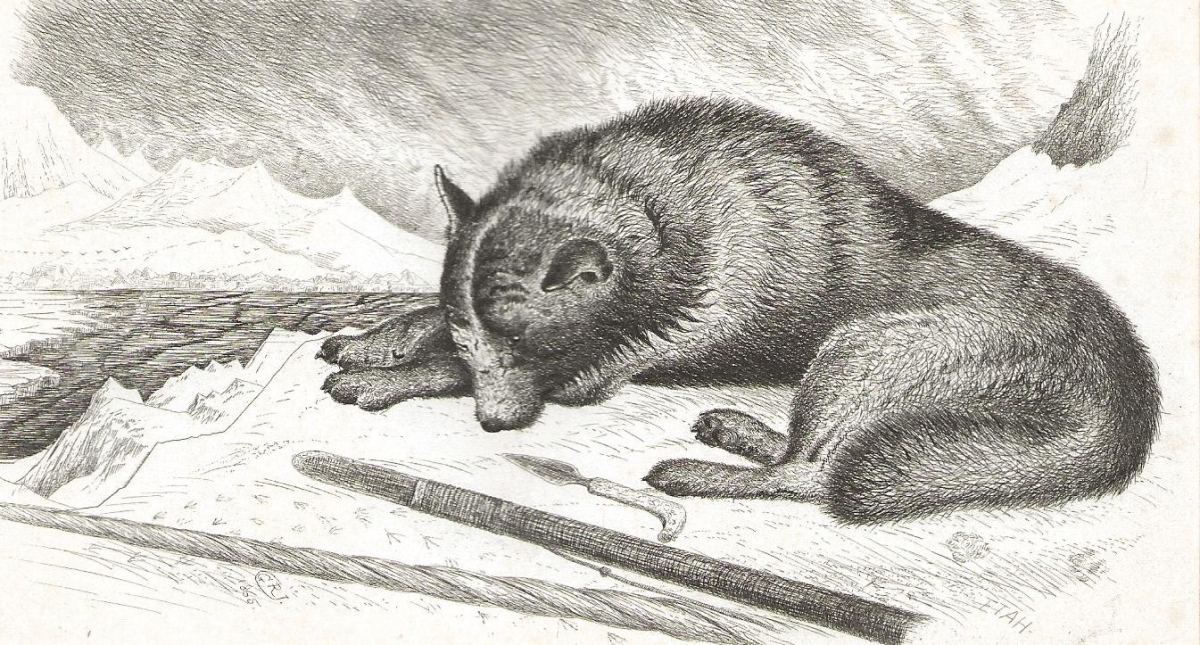 The engraving by George R. Jesse from 1866 features the Esquimaux Dog Etah, the sole survivor of a team of some 50 dogs from Dr. Elisha Kane’s Arctic expedition. Kane, a surgeon, sailed from New York in 1853 in command of the brig Advance. The aim was to ascertain the fate of Sir John Franklin and the lost ship’s companies, who had sailed in 1845. Like all the previous ones, Kane’s voyage failed, but it greatly advanced the world’s knowledge of the Etah Esquimaux, after whom the dog was named.

On his arrival back in New York, Etah was the centre of much attention and was acquired by Phineas Barnum of circus fame and exhibited throughout New York. After a while he was bought by Lieutenant Hugh Stewart of the Royal Navy, who brought him to England. He was exhibited at the Grand National Exhibition of Dogs at Chelsea and lived out the rest of his long life in England. 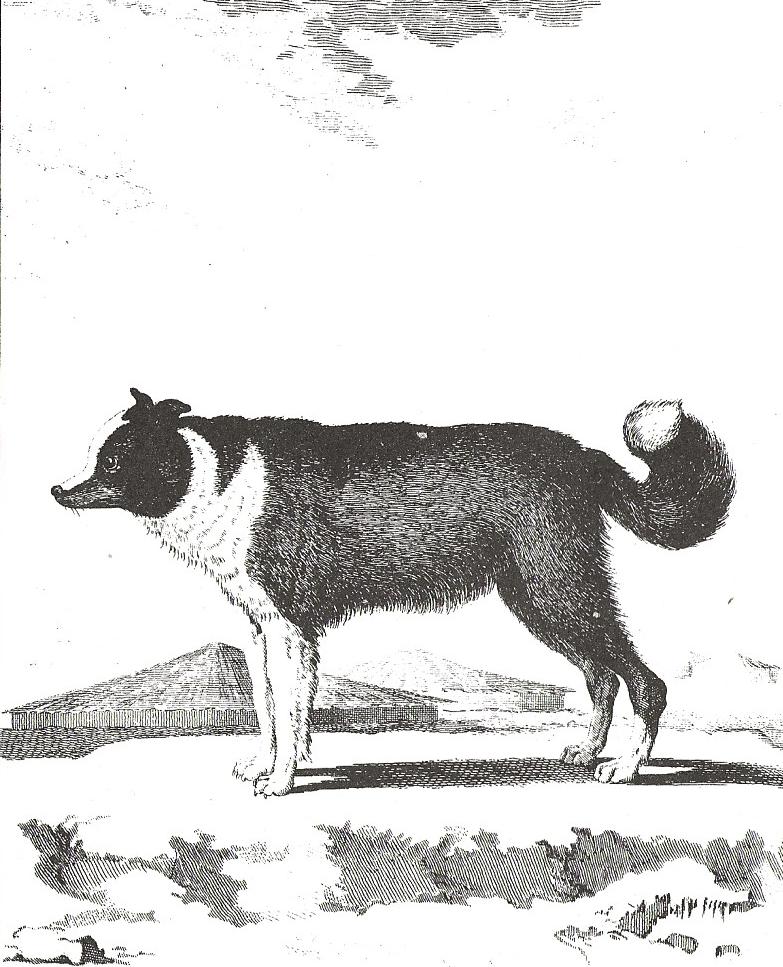 The ancestors of the Iceland Dog arrived on the island in 874 AD, yet this ancient breed has never found fame outside its native Iceland, where it is used as a general farm dog. The breed was recognized by Comte de Buffon, the French naturalist, mathematician, cosmologist and encyclopédiste whose works influenced the next two generations of naturalists. He included the breed with an engraving of a dog against the stark Icelandic landscape in his monumental “Histoire Naturelle” (1755). 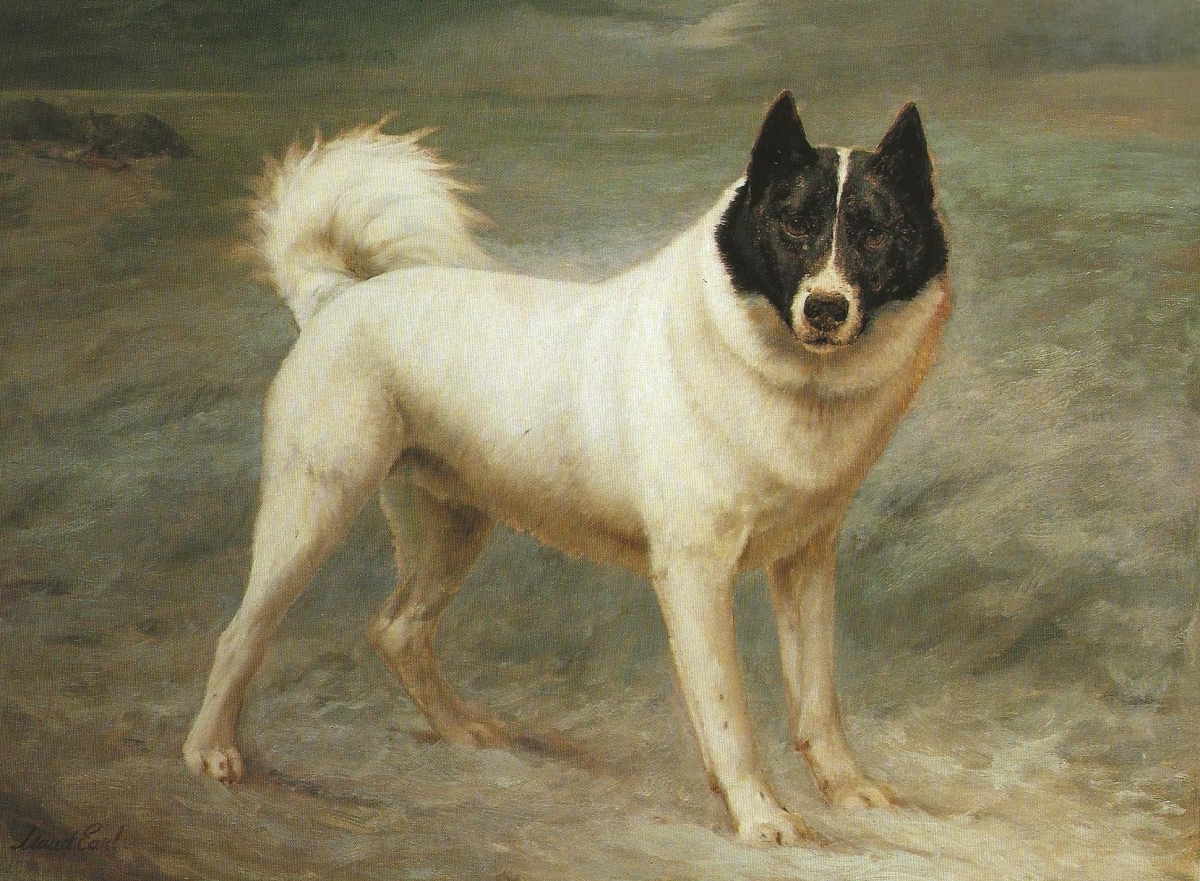 Maud Earl’s painting of the Siberian/Norwegian Sledge Dog Luska, which she painted in 1897, is, in my opinion, one of the most outstanding dog portraits completed by the artist. Luska was imported and owned in England by H.R.H. The Prince of Wales. He was entered in classes for Foreign Dogs at shows in Leicester, Birmingham and Earls Court.

The picture was exhibited in Maud Earl’s Canine Celebrities of the Day exhibition at Graves Gallery, Pall Mall, London, in May 1897 and subsequently published in Comte de Bylandt’s “Dogs of All Nations.” It was included in Christie’s Man’s Best Friend sale in 1990 and was bought for £14,000 by the late Marjorie Damon Raike, who built up a sizable collection of pictures by Maud Earl at her home in California. 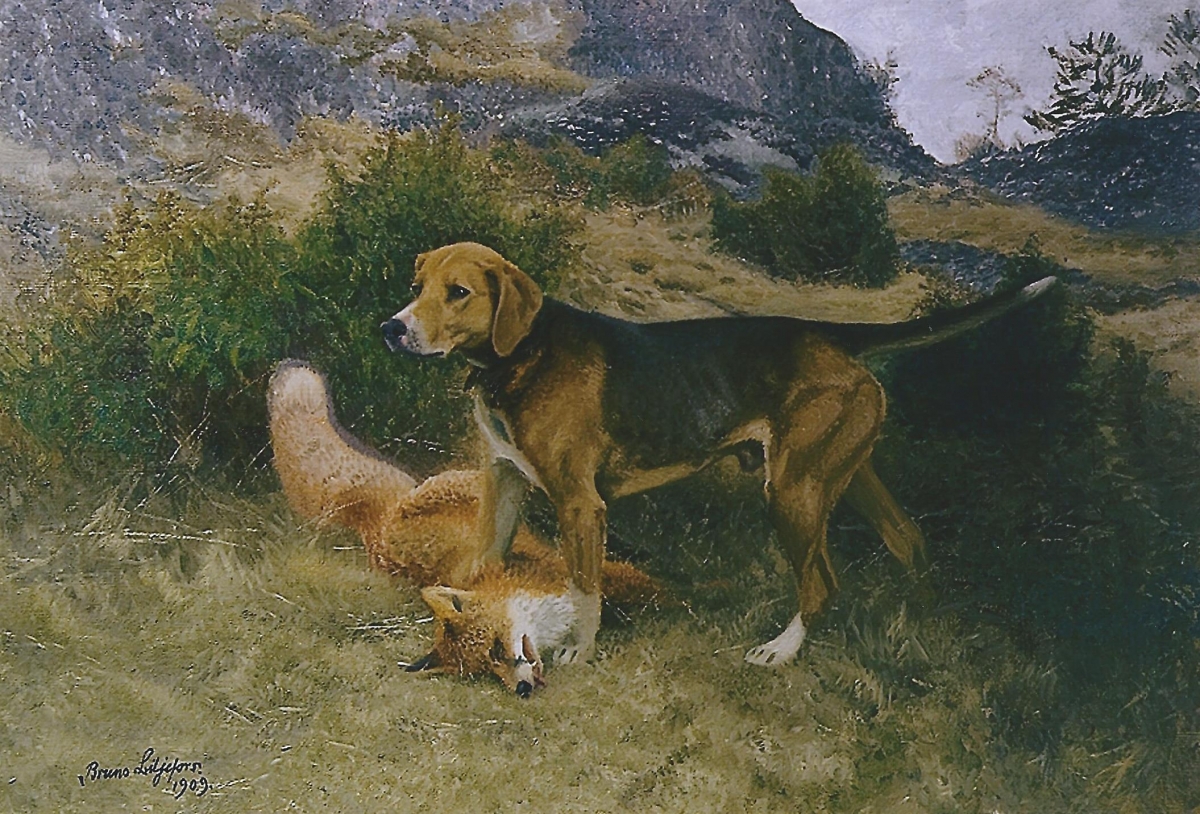 Sweden’s most influential animal painter, Bruno Liljefors, painted the portrait of Kling the Swedish Hound (renamed the Hamiltonstövare in 1820), with a dead fox a foot. Kling was the first champion in the breed, made up in 1909. He was owned by Captain Torstehn Kloplien and descended from Count Hamilton’s most famous hounds. The picture is in the collection of the Swedish Kennel Club Museum. 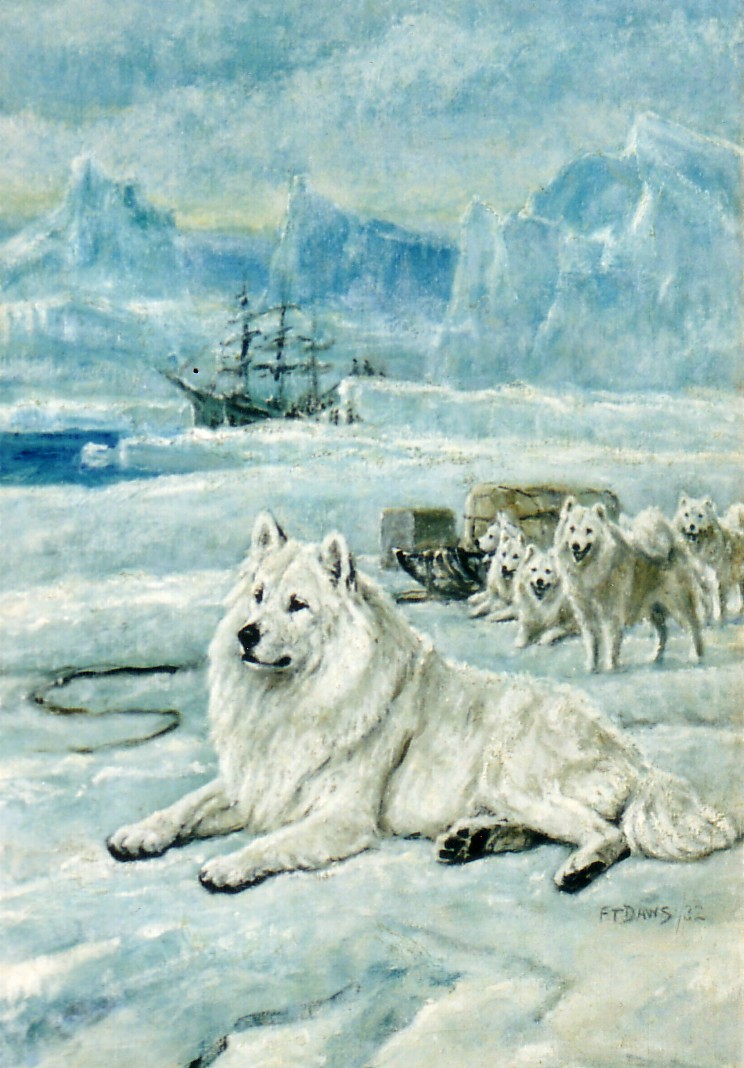 Frederick Thomas Daws’ picture of the Samoyed Ch. Loga of the Arctic is considered by many to be his finest work. It was painted in 1932, and Daws has positioned the dog against a background appropriate for a northern breed. Loga was owned by Marion Keyte-Perry, who had the most influential kennel in the breed in the UK in the middle years of the 19th Century. Loga was her second champion, whom she said “raised the whole standard of the breed.” The picture is in the Kennel Club Collection in London.

Britain produced a number of canine artists who worked in the middle two quarters of the 20th Century recording a large number of show dogs of all breeds. They will never be regarded as great artists, but for recording history their work is important. One was Nina Scott Langley, who is best known for her illustration work, including some landmark posters for the London Underground, although primarily she was a dog artist. She had an exhibition of her work at the Walker Gallery in London in 1928. 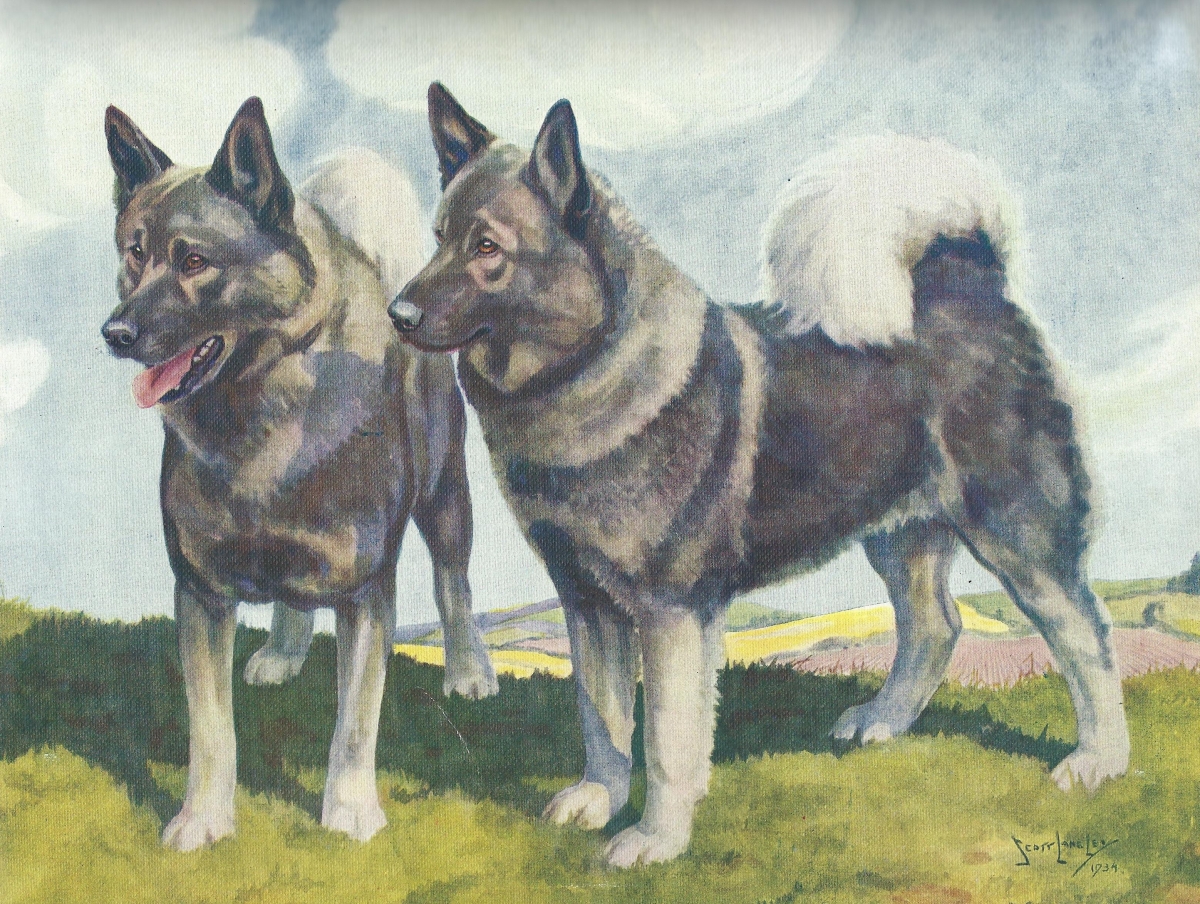 Among the works that include her illustrations in Hutchinson’s Dog Encyclopaedia, and her interpretation of ideal Elkhounds is one such illustration. 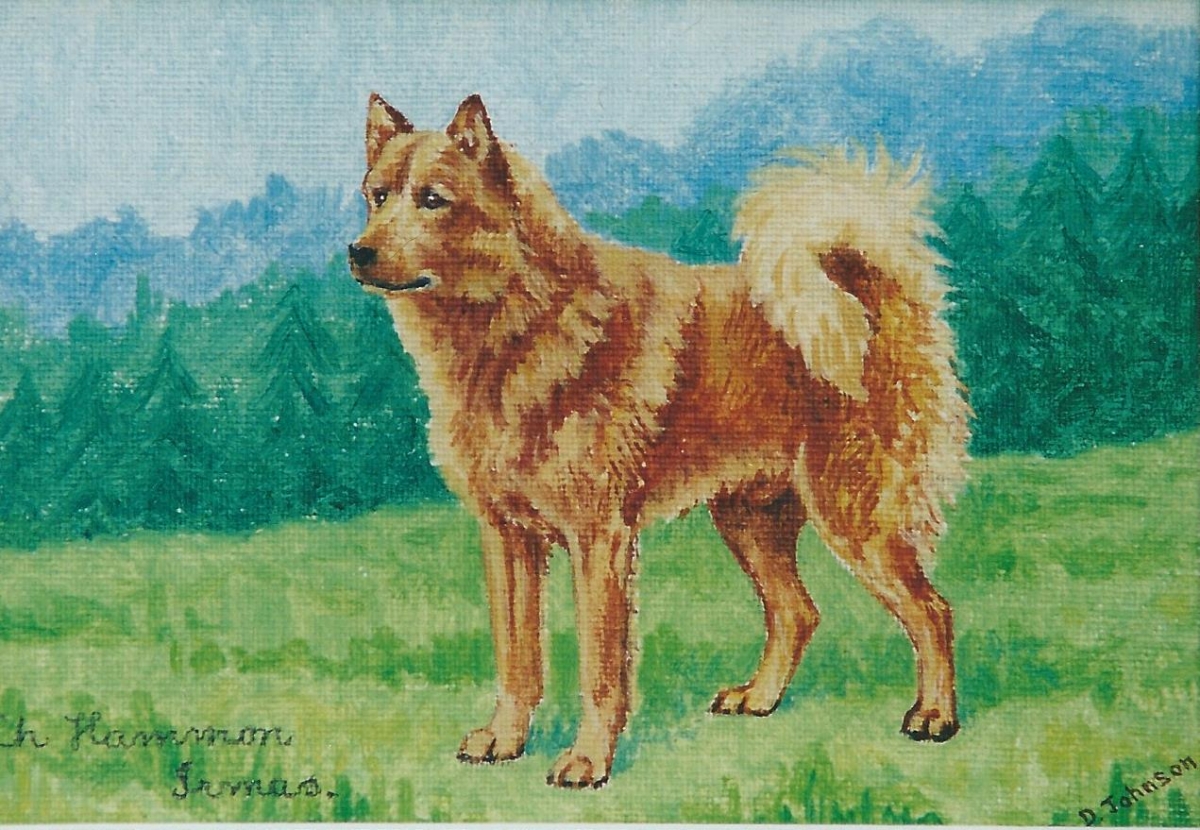 Another of these artists was Dorothy Johnson, whose output from about 1930 was exclusively dogs. The Finnish Spitz is Ch. Hammon Irmas, bred by Mrs. J.H.B. de la Poer Beresford and Lady Kitty Ritson from two Finnish imports and was one of the first champions in the breed in the UK, obtaining his title in 1937, two years after Challenge Certificates were first awarded to the breed. As well as being a top show dog, he also gained a reputation for being a great hunter of rabbits on the Sussex Downs. 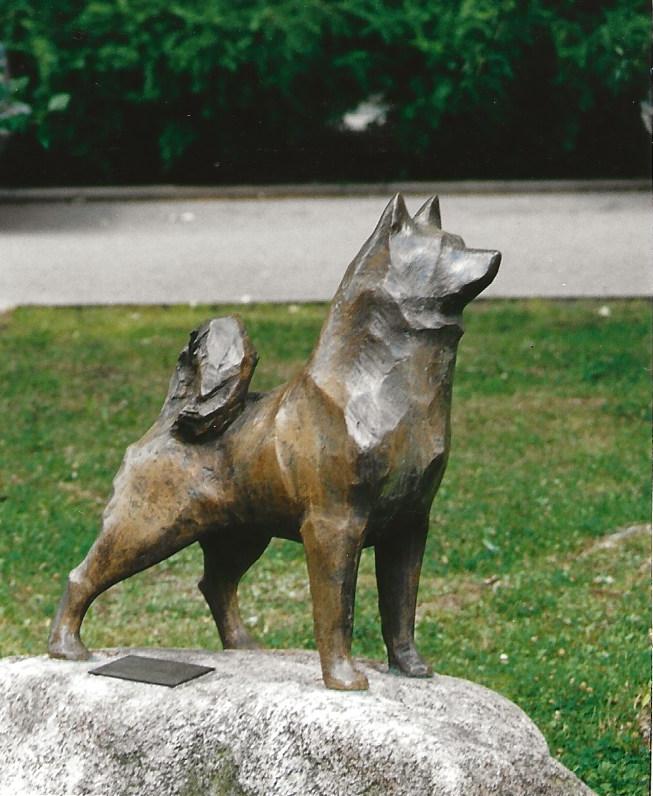 The bronze was modelled on Working and Show Ch. Santasepon Morrimoykky. The work of the Finnish Spitz is to locate capercaillie and black grouse in trees, circle the trees at a distance and bark to alert the sportsman of its find. In trials the barks per minute and the time the barking goes on for are all important. I’m thinking that if you like a quiet life and have near neighbors, this isn’t the breed for you!

© Dog News. This article may not be reposted, reprinted, rewritten, excerpted or otherwise duplicated in any medium without the express written permission of the publisher.
Fri, 09/17/2021 - 12:50am