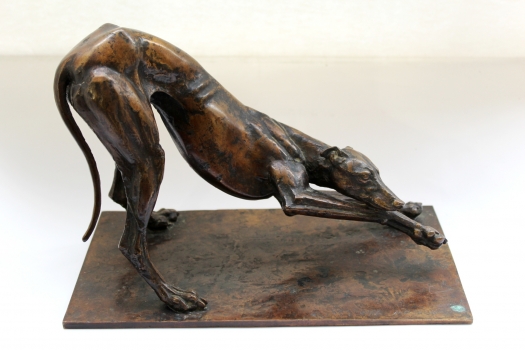 This Greyhound sold for an amount that might not be too much of a stretch for a bargain-hunting collector.

Affordable finds for the budget-conscious collector
By
Nick Waters 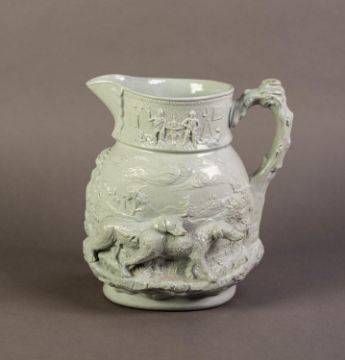 For anyone on a low budget and interested in collecting, English pottery “game jugs” made in the Staffordshire Potteries around the end of the 19th Century are well worth considering. Even the rarer, well-designed and detailed molded ones can be had for less than £100.

A Masons jug molded with game and Pointers in a rural landscape with sportsmen around the neck of the jug is one such example and was sold by Capes Dunn Auctioneers for an above estimate £75.

Chines-export wares, popular both with the British and American markets in the last quarter of the 18th Century, are no strangers to the salerooms, and many pieces command very little. One example with expectations of as little as £300 was sold by C & T Auctions in Kent for £4,000.

The bowl was of a large size and decorated profusely all round with European huntsmen, hounds and dogs flushing pheasants. The scenes were possibly copies of prints after the work of James Seymour (1702-1752), who was particularly appreciated for his equestrian subjects and whose patrons included the 6th Duke of Somerset. The subjects and the fact that they were particularly well drawn in the mandarin palette obviously appealed to the market far more than the auction house imagined. 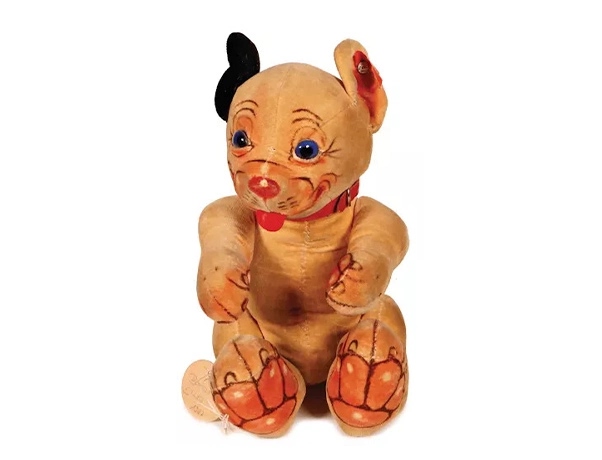 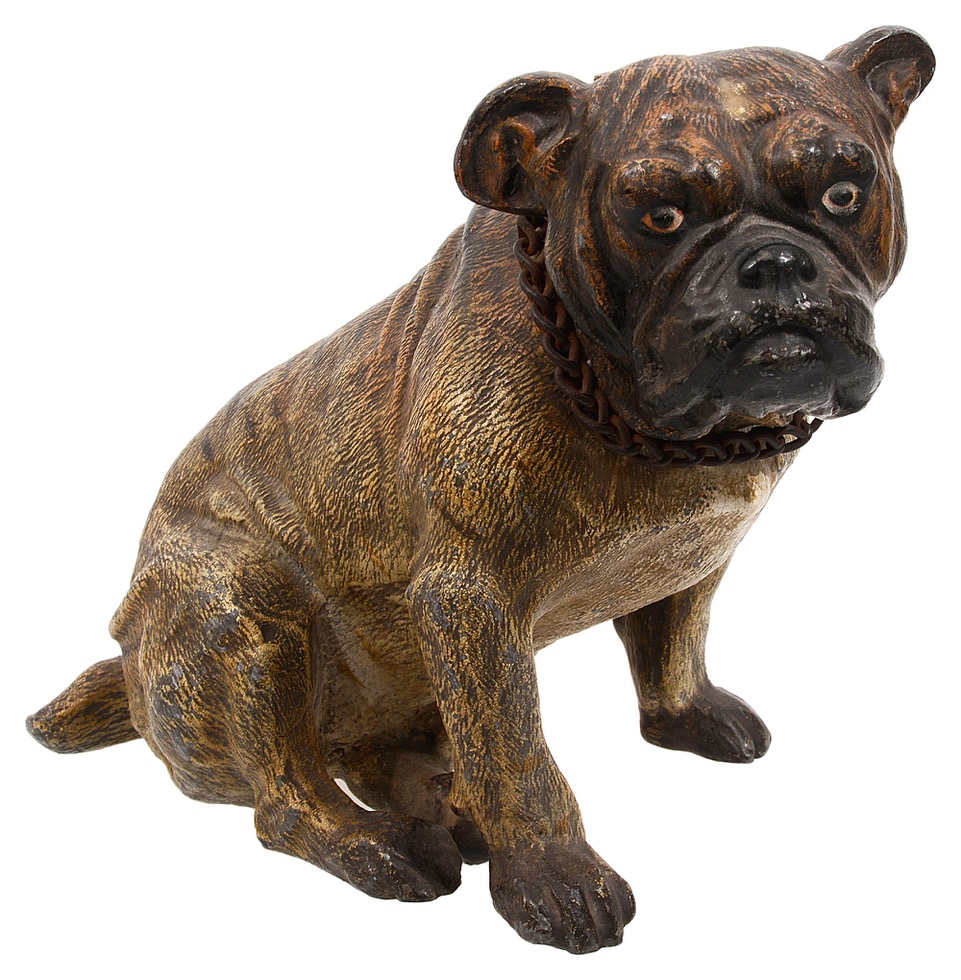 A subject that needs a lot of study is toys made by the German firm of Steiff. As always, it’s demand, condition and rarity that dictate. The German saleroom Ladenburger Spielzeugauktion held an exclusive Steiff sale, and it turned out to be a “white glove” affair, with every lot selling. One of the top performers, selling for Euros 33,000 against a top estimate of Euros 24,000, was a fully jointed, hand-painted velvet “Bonzo” cartoon dog.

The character Bonzo was the creation of British commercial artist George Ernest Studdy (1878-1948) and the creation for which he is best remembered. Large numbers of Bonzos were made by the British firm Chad Valley; however, this Bonzo from 1927 is one of only 115 produced by Steiff over seven different sizes.

When one thinks of cold painted spelter and bronze, one thinks of Austria. Vast numbers of birds and animals emerged from the many foundries in that country. An early 20th-Century novelty table-match striker in the form of a well-modelled sitting Bulldog sold in the Catherine Southon saleroom within estimate at £140. 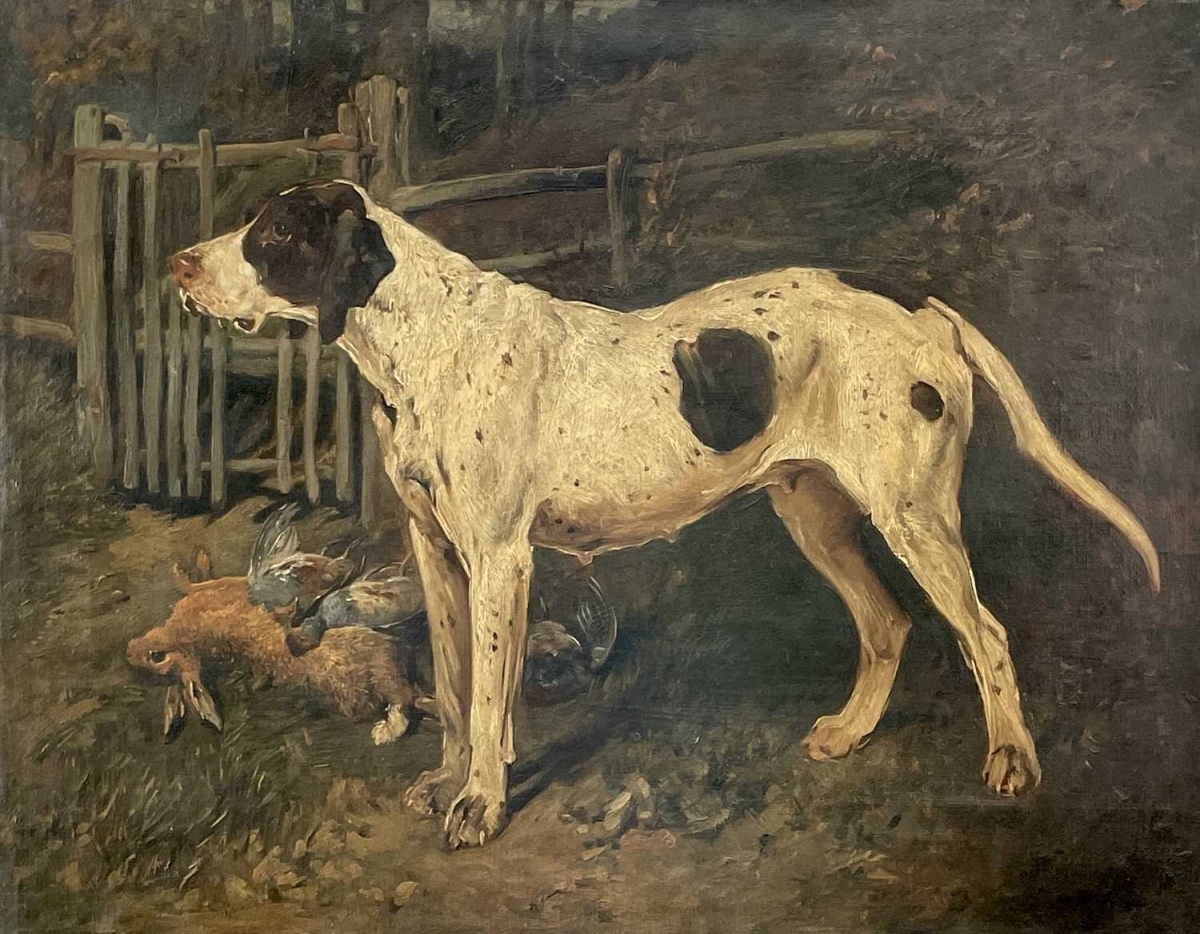 John Emms (1844-1912) was one of the leading canine painters of his day. He became an avid hunter and was famous for his paintings of hounds and terriers, with his Foxhound pictures being ones that usually command the highest prices at auction. His oeuvre was by no means confined to just those subjects, and David Lay auction house offered a well-observed and composed study of a liver and white Pointer with dead game at foot beside a rustic wicket and fence.

If you don’t succeed at first, try again. This was a re-entry from a previous Lay sale where it had failed to sell. This time, estimated at £2,500-£4,500, it brought decent competition, and sold for £6,200 to an online buyer. 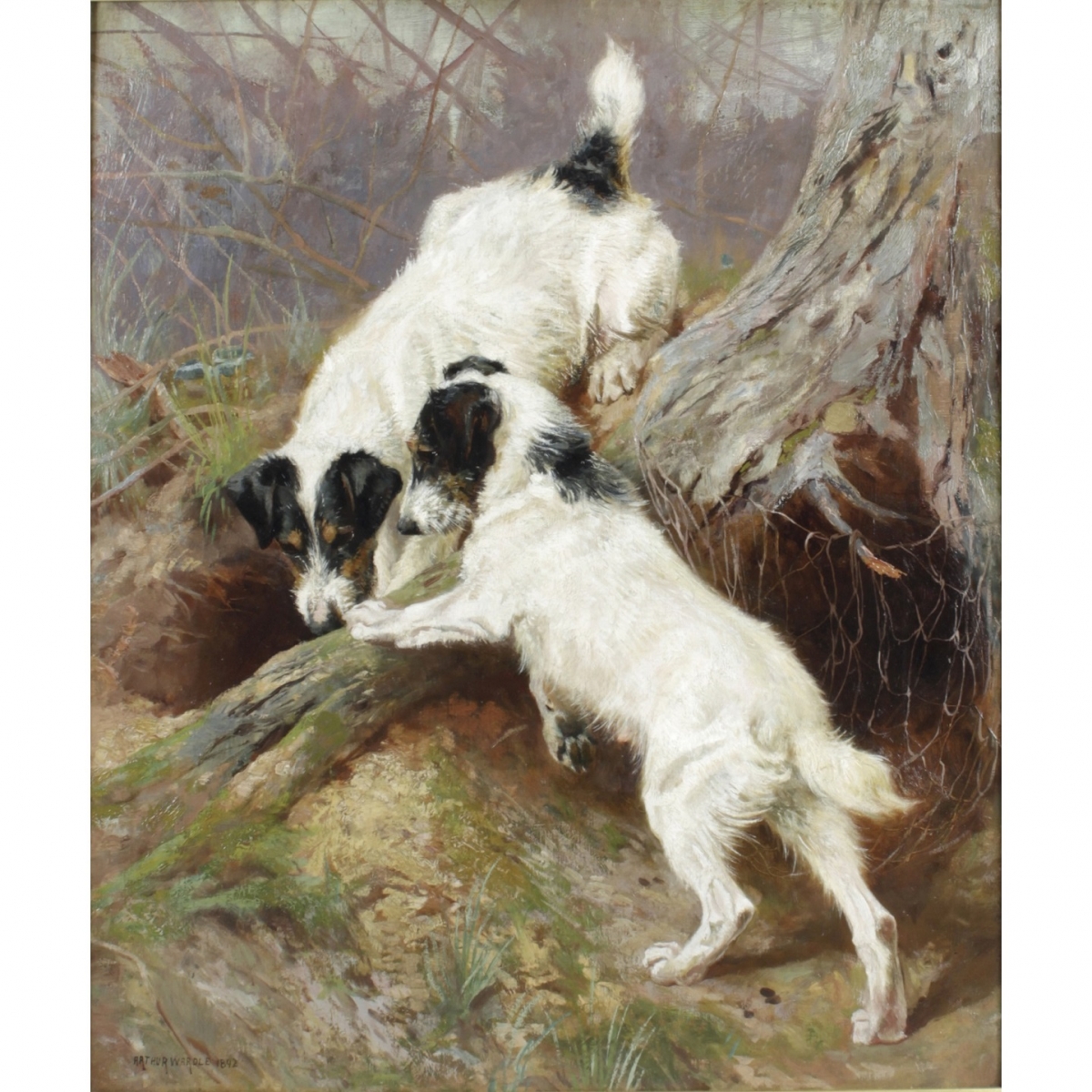 Another leading canine painter and one of the most widely known of the 19th and 20th centuries was Arthur Wardle (1860-1946). He first exhibited work at the Royal Academy aged just 16 – “Cattle on the River Thames” – and from then on had a lifelong interest in painting animals. His studies of large cats and other wild animals were done from sketches he did at London Zoo, a practice followed by many artists at the time.

His best-known painting is “The Totteridge XI”: Fox Terriers owned by Francis Redmond, the original of which is in the Kennel Club in London, with a copy by Wardle in the AKC Museum of the Dog in New York.

Fellows of Birmingham offered a study by Wardle painted in 1892 of two Fox Terriers at a rabbit warren beneath an old tree, which sold mid-estimate for £4,700. It was paintings on this theme that cemented Wardle’s status as a principal animalier painter of his era. 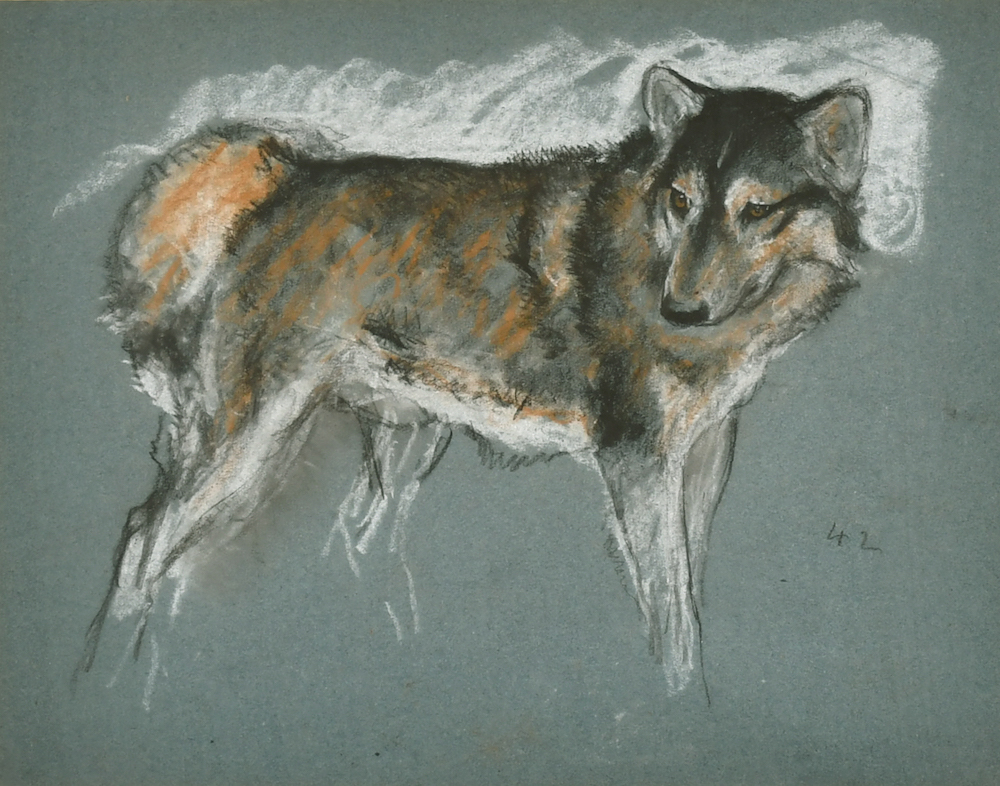 Another painting by Wardle that appeared at auction a week earlier was a pastel sketch of a Siberian Husky. It was offered by Parker Fine Art with an estimate of £200-£400, but failed to find a new home. It first appeared at auction in November 1994, when Sotheby’s in London held the “white glove” sale of the contents of the artist’s studio. 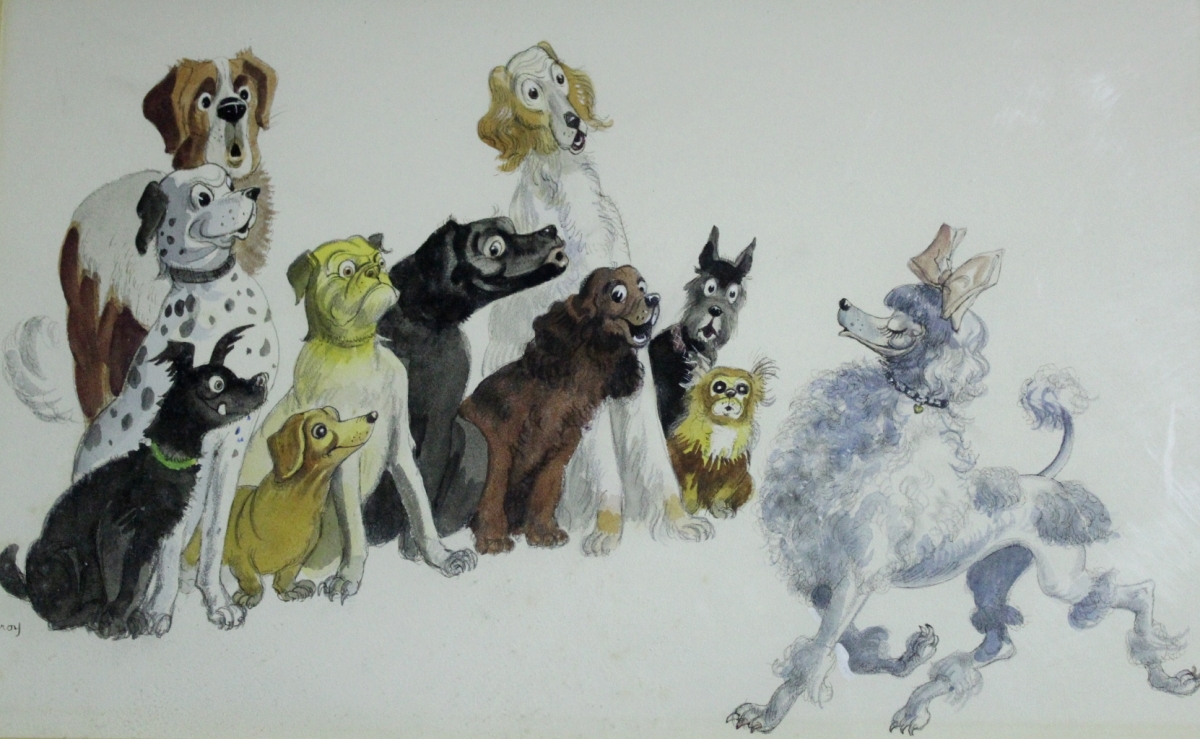 In total contrast to the works of Emms and Wardle is a watercolor and pastel picture by John Thomas Young Gilroy (1898-1985). Titled “The Village Beauty,” a somewhat arrogant, perfectly coiffured Poodle promenades past a group of bemused dogs.

Gilroy was an accomplished portrait painter, numbering royalty, politicians and actors among his sitters; these included British Prime Minister Sir Winston Churchill and actor Sir John Gielgud. He is, though, best known for his advertising posters for Guinness the Irish stout.

Offered by Lawrence Auctioneers with an estimate of just £100-£200, it sold for £3,200 to a determined private U.K. buyer. The pulling power of the dog – the price was out of step with many of his works and most akin to his original Guinness artwork.

The professor of sculpture at the Royal College of Arts, John Skeaping R.A., in his autobiography “Drawn from Life” wrote: “Sally Arnup was an unconventional girl with a strong personality. She used to bring her baby into school with her and kept it, like a puppy, in a cardboard box in the class-room whilst she worked.” 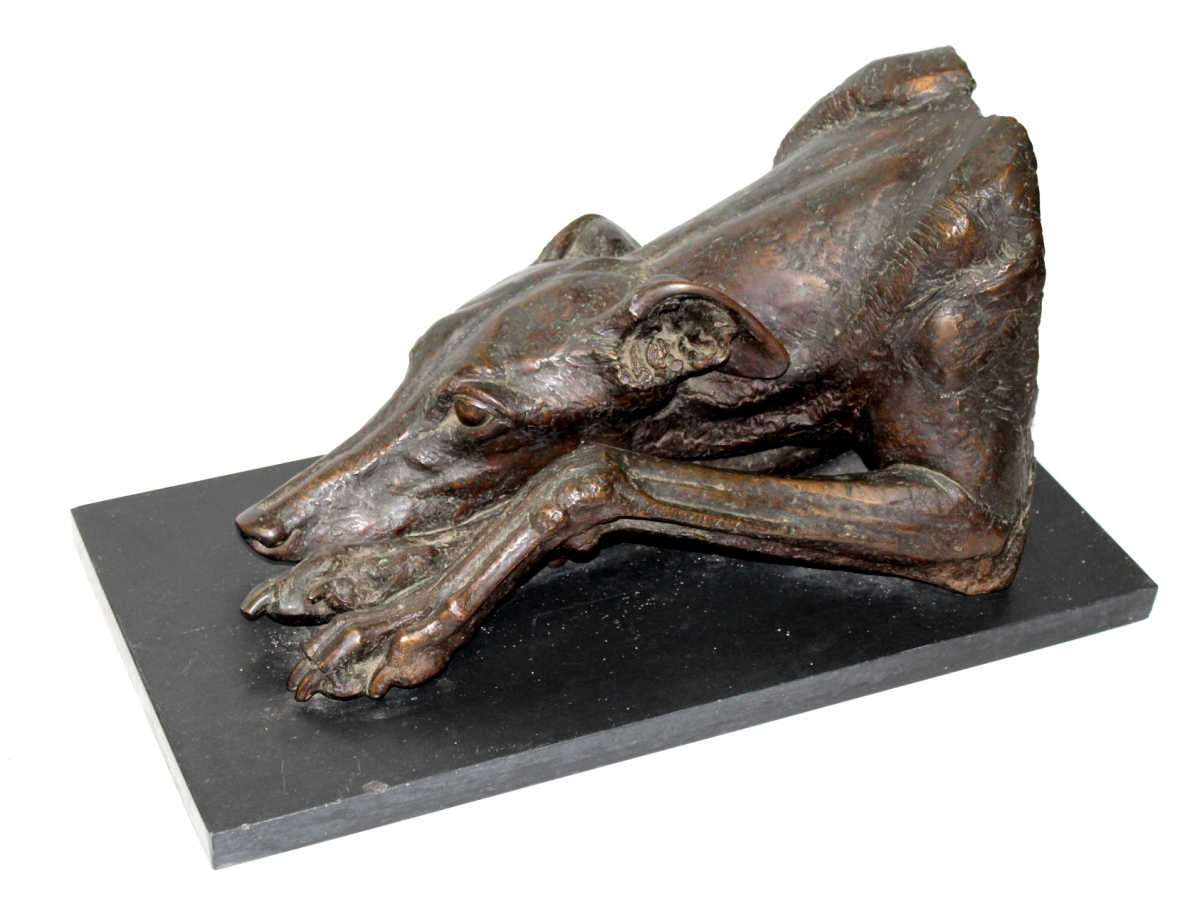 Sally Arnup (1930-2015) was a prolific sculptress who created a great body of work. Her models were always well observed with an element of realism, and she always captured the “soul” and character of whatever animal she was sculpting, something few sculptors can manage.

On the whole prices for her work on the secondary market seem to be echoing the words of Skeaping inasmuch as she is becoming one of THE contemporary animaliers. 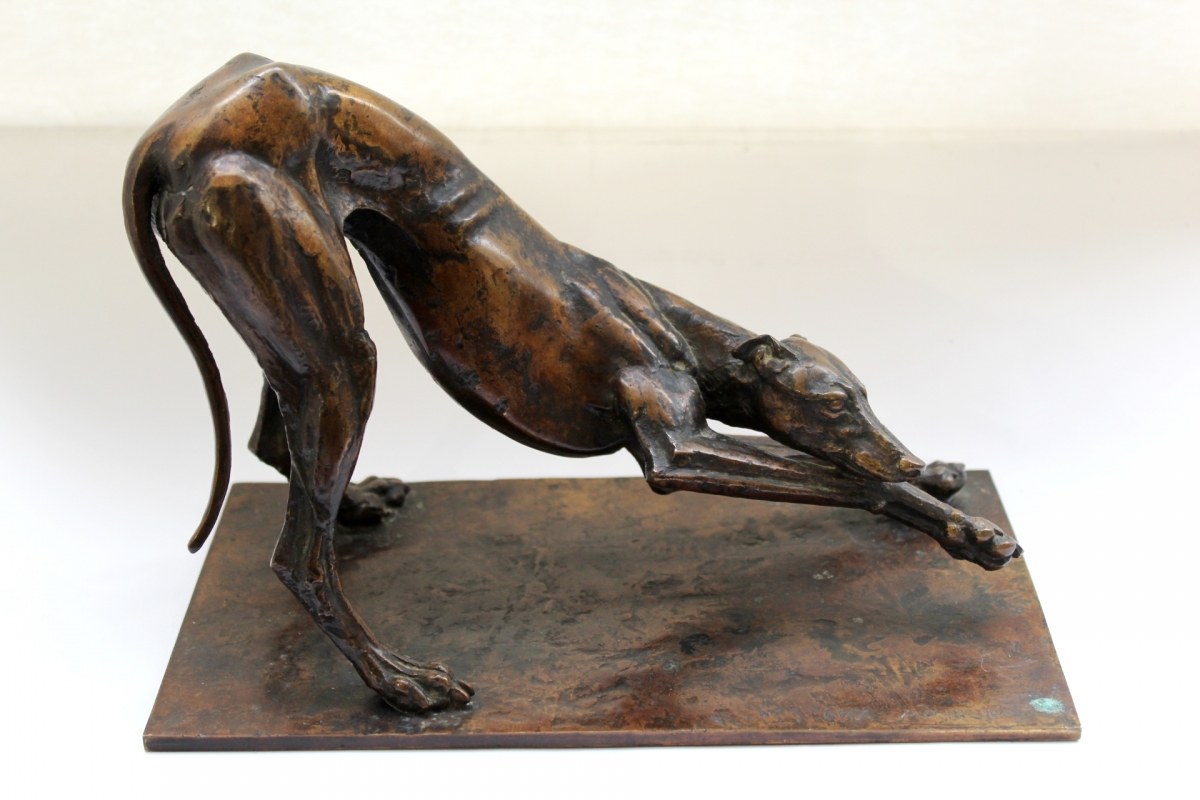 Lawrence Auctioneers offered two of her Greyhound bronzes that had once been in the collection of John Skeaping, himself a Greyhound enthusiast and owner, and had come to auction by descent.

© Dog News. This article may not be reposted, reprinted, rewritten, excerpted or otherwise duplicated in any medium without the express written permission of the publisher.
Fri, 04/29/2022 - 9:34pm