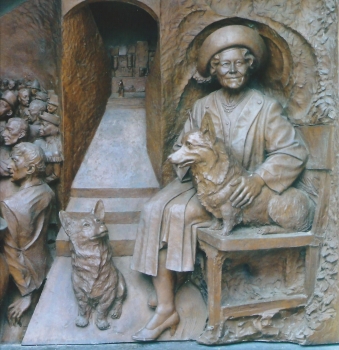 The late Queen Mother with her ever-present Corgis.

Of all the animals, the dog has been featured most frequently alongside humankind in endless art forms. This feature focuses on a handful of sculptures ranging from the monumental to purely decorative.

Three of the 19th Century’s great romantic poets – Sir Walter Scott, Lord Byron and Alfred Lord Tennyson – are all commemorated with public monuments accompanied by their pet at their side.

Scottish historical novelist, poet, playwright and historian Scott (1771-1832) was one of nine children, six having died in infancy, such was child mortality all those years ago. He himself survived polio. 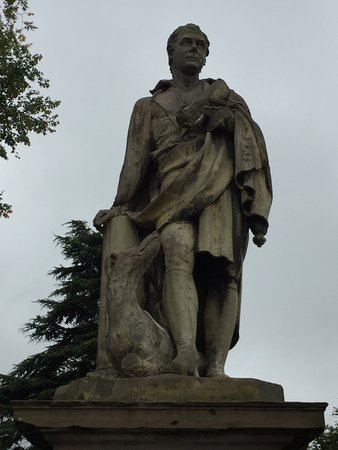 Many of his literary works remain English-language classics, including “Rob Roy,” “Lady of the Lake” and “Ivanhoe,” the latter made into a film several times.

Modern-day historians consider his pet to have been a Deerhound that was a gift to Scott from his friend Alexander Macdonell of Glengarry and is buried at Scott’s home, Abbotsford House. He named it “Maida” after the Battle of Maida of 1806, a significant British victory against the French.

Scott and Maida’s statue is at South Inch in Perth and was created in 1845 by the Cochrane brothers, a local family of fine craftsmen who emigrated with their mother to Toronto. 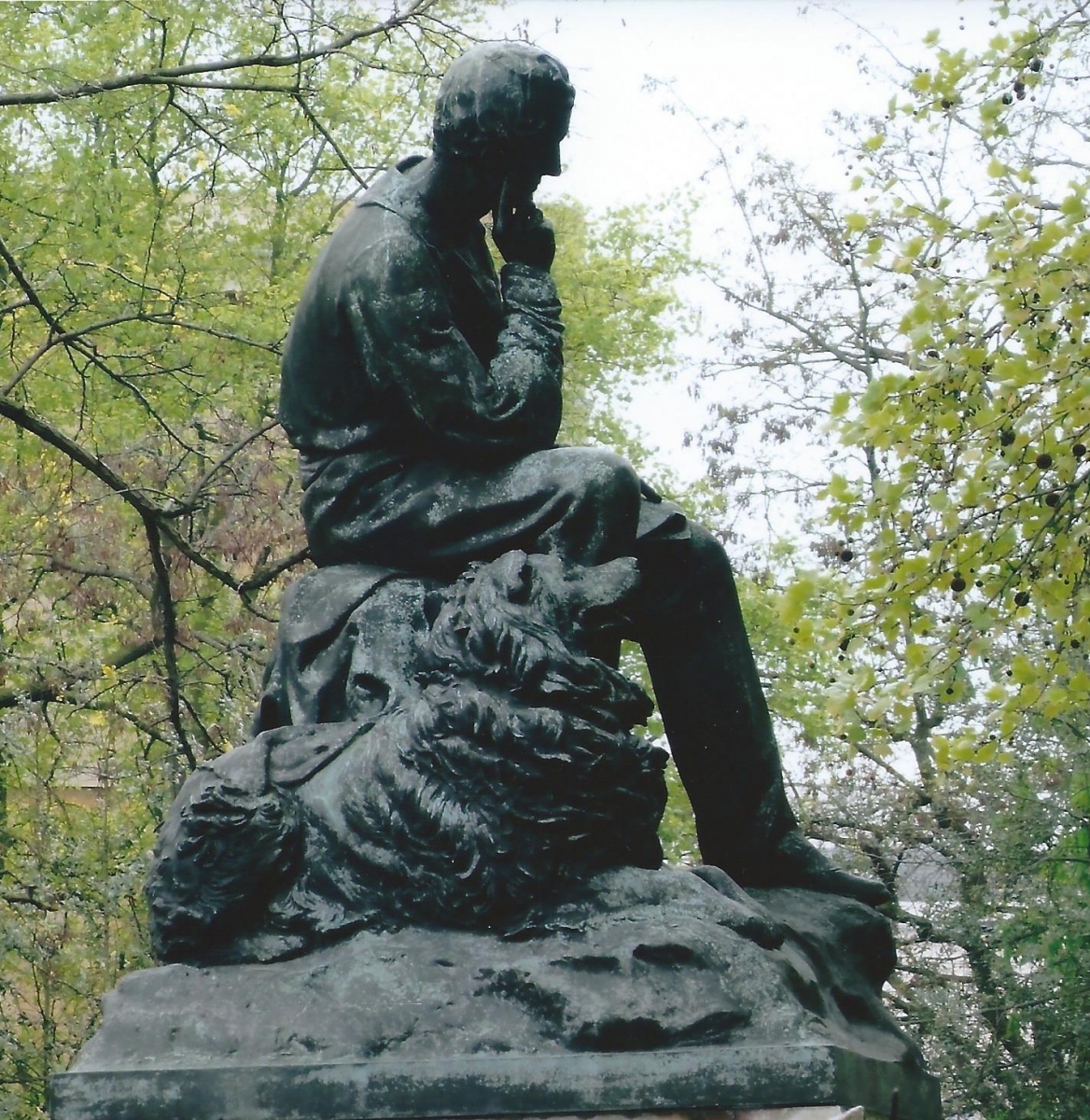 Byron (1788-1824) was the most flamboyant and notorious of the major English romantic poets and is regarded as one of the greatest English poets. He travelled extensively across Europe and later in his short life joined the Greek War of Independence fighting the Ottoman Empire. He died in 1824 at the age of 36 from a fever contracted after the First and Second Siege of Missolonghi. The Greeks revere him as a folk hero.

Byron’s constant companion in his youth was his Newfoundland, “Boatswain,” and the two are commemorated by an imposing long-forgotten bronze beneath some trees on an island at the bottom of the busy multi-lane Park Lane in London. It shows a thoughtful Byron, his beloved Boatswain beside him lovingly looking up at his master. The tunnel to it has long since been closed, so anyone wishing to see it has to take their life in their hands and cross Park Lane.

It is the work of sculptor and architectural sculptor Richard Claude Belt, whose colorful career was interrupted when he was sentenced to 12 months hard labor convicted of obtaining money under false pretences. 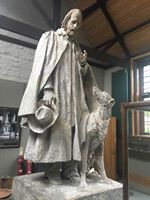 Tennyson (1809-1892) was poet laureate to Queen Victoria. A number of phrases from Tennyson’s works have become commonplace in the English language, including “’Tis better to have loved and lost/Than never to have loved at all” and “Theirs not to reason why/Theirs but to do and die.”

His memorial statue stands at Lincoln Cathedral and shows a thoughtful Tennyson with his Deerhound, “Karenina,” beside him looking up affectionately. Karenina was named after Leo Tolstoy’s novel “Anna Karenina,” considered by many to be the greatest work of literature ever written. The group is the work of Tennyson’s friend, George Frederick Watts, who began the memorial six years after Tennyson’s death. He was 81 when he started, and it took him five years to complete.

Captain Meriwether Lewis was an American explorer best known for his role as the leader of the Lewis and Clark expedition, also known as the “Corps of Discovery.” Their mission was to explore the territory of the Louisiana Purchase, establish trade with and sovereignty over the native peoples near the Missouri River, and claim the Pacific Northwest and Oregon County for the United States before European nations did. 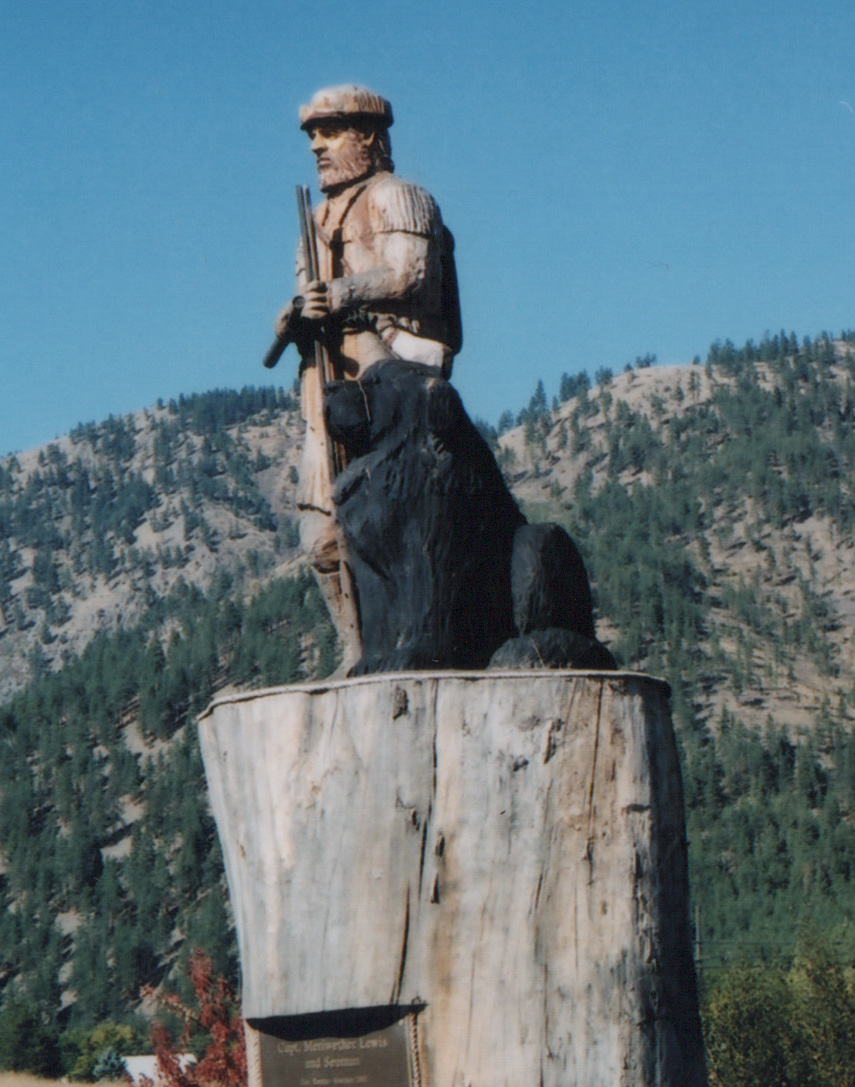 Lewis holding a rifle, his Newfoundland “Seaman” sitting beside him, was carved by Jim Rogers in 2002. It is carved from a Douglas-fir base donated by Stimson Lumber Company from a tree that stood when Lewis passed near Missoula, Montana, in 1806. 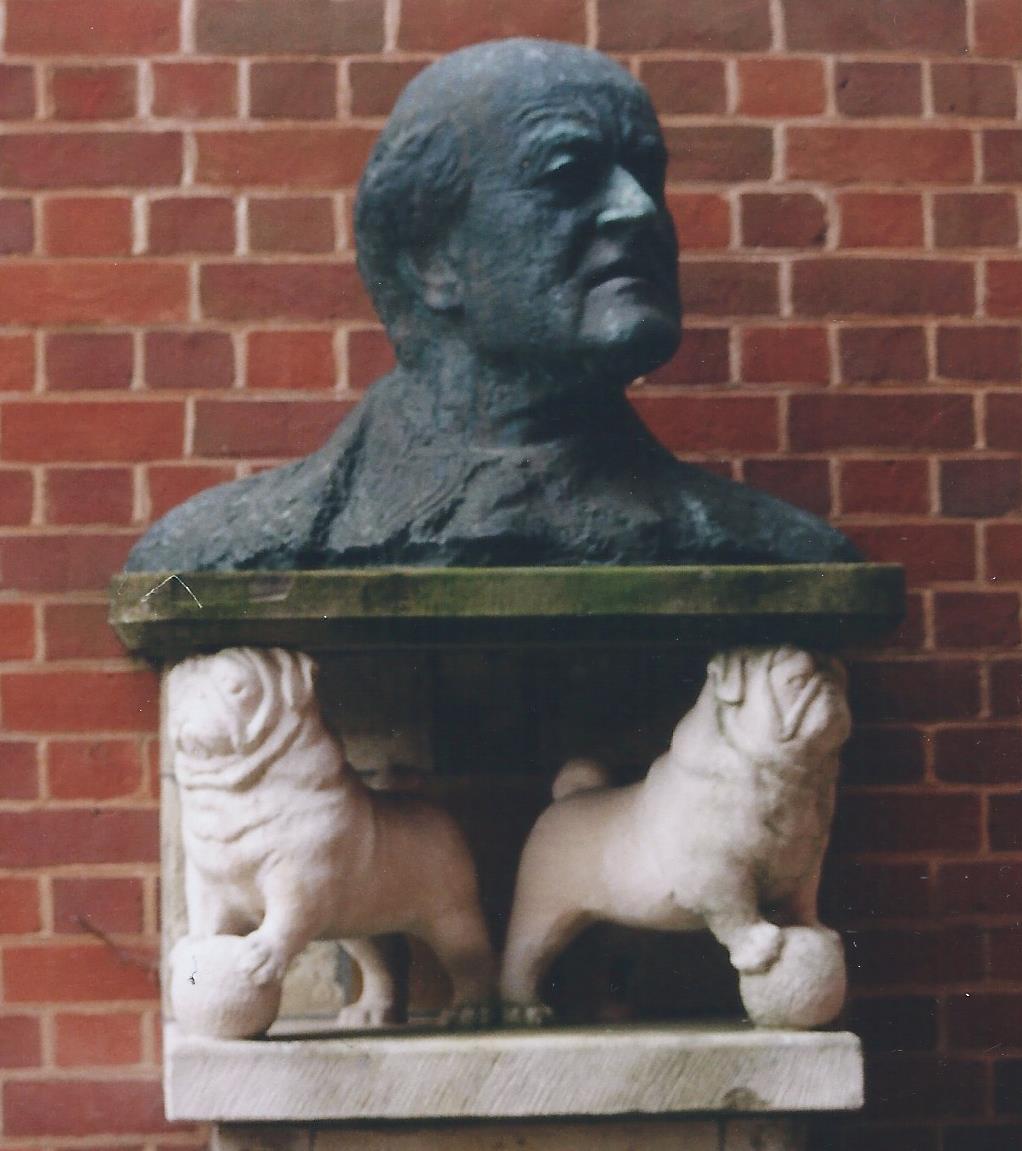 The Glyndebourne Festival Opera is an annual opera festival that takes place in a world-class purpose-built opera house at the home of the Christie family, Glyndebourne, in East Sussex in southeast England. Looking over the opera house is a statue of the founder of the opera, John Christie, that is affectionately known as “The Three Graces.” The group is in the form of a bronze bust by Oscar Neon, whose statues of the good and great have included the Queen and Sir Winston Churchill, supported by two life-size “Pugs Rampant” (the family have always been enthusiastic Pug owners) carved in Portland limestone by Harry Gray. 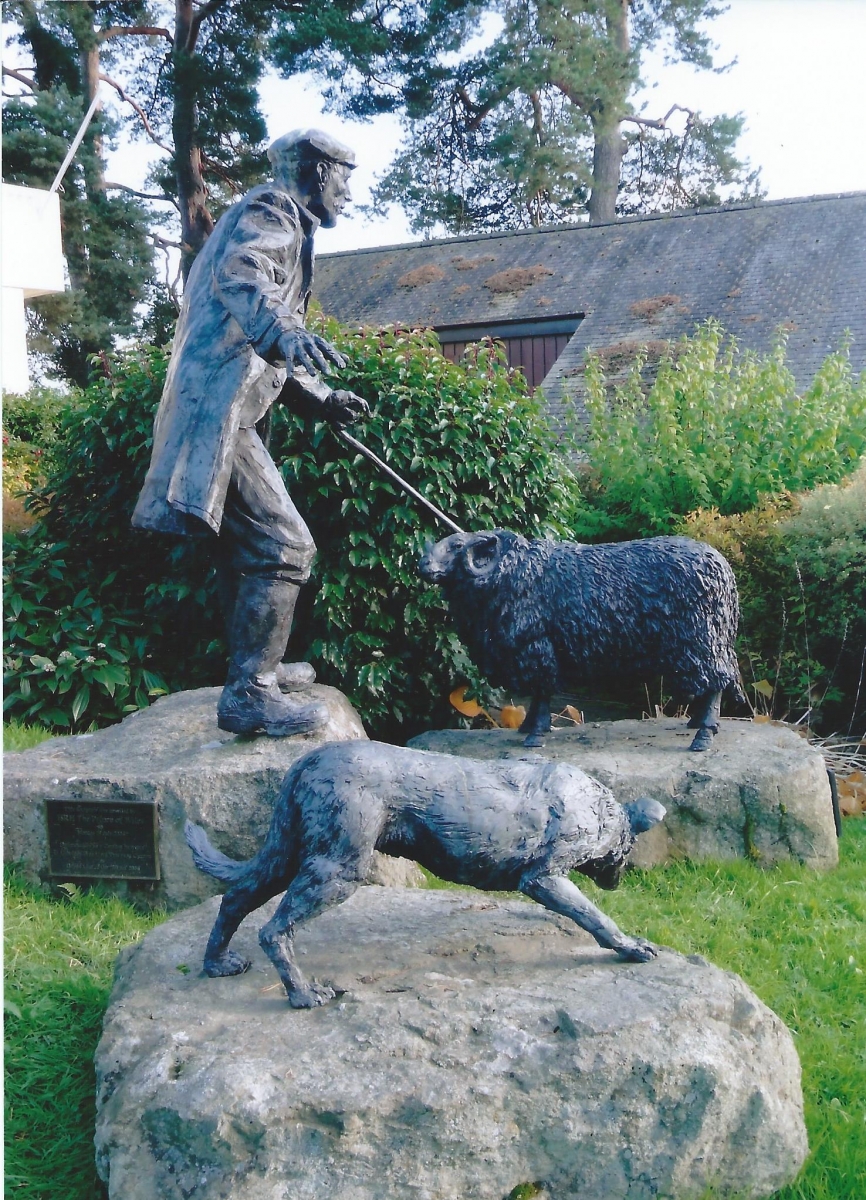 The Welsh nation has a tradition for sheep farming, shepherding and working sheepdogs. Most people who have visited the Welsh Kennel Club show at the Royal Welsh Showground at LLanelwedd will be familiar with the life-size bronze group by Christopher Kelly mounted on stone from a nearby quarry. The group shows a Welsh farmer dressed as so many have been over the years, a Welsh ram modelled on one from the Rhiwlas Estate and a dog from a farm near the foundry where the group was cast. The Rhiwlas Estate hosted the first sheepdog trial in Britain in 1873.

Walking up The Mall in London from Buckingham Palace on the left-hand side is a memorial statue to the late Queen Mother. On the base of the statue are two 11-foot-long bronze relief panels sculpted by Paul Day that show scenes from the life of the Queen Mother. The final tableau shows the Queen Mother, alone with her two Corgis and thoughts, sitting in the rose garden at her beloved Scottish home, the Castle of Mey. 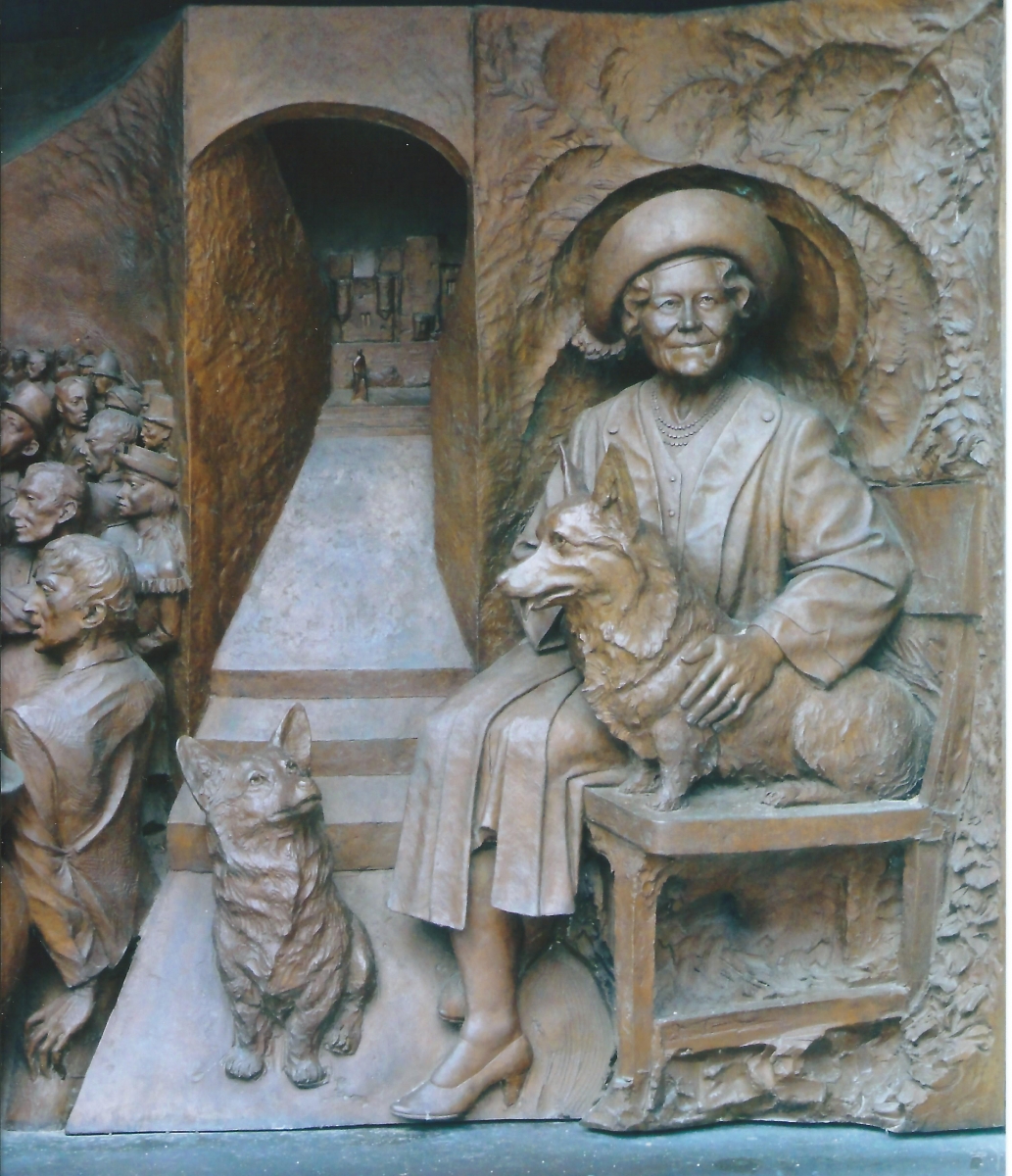 Although the Queen is more associated with Corgis, it was her mother along with King George VI who introduced the breed to the royal household. 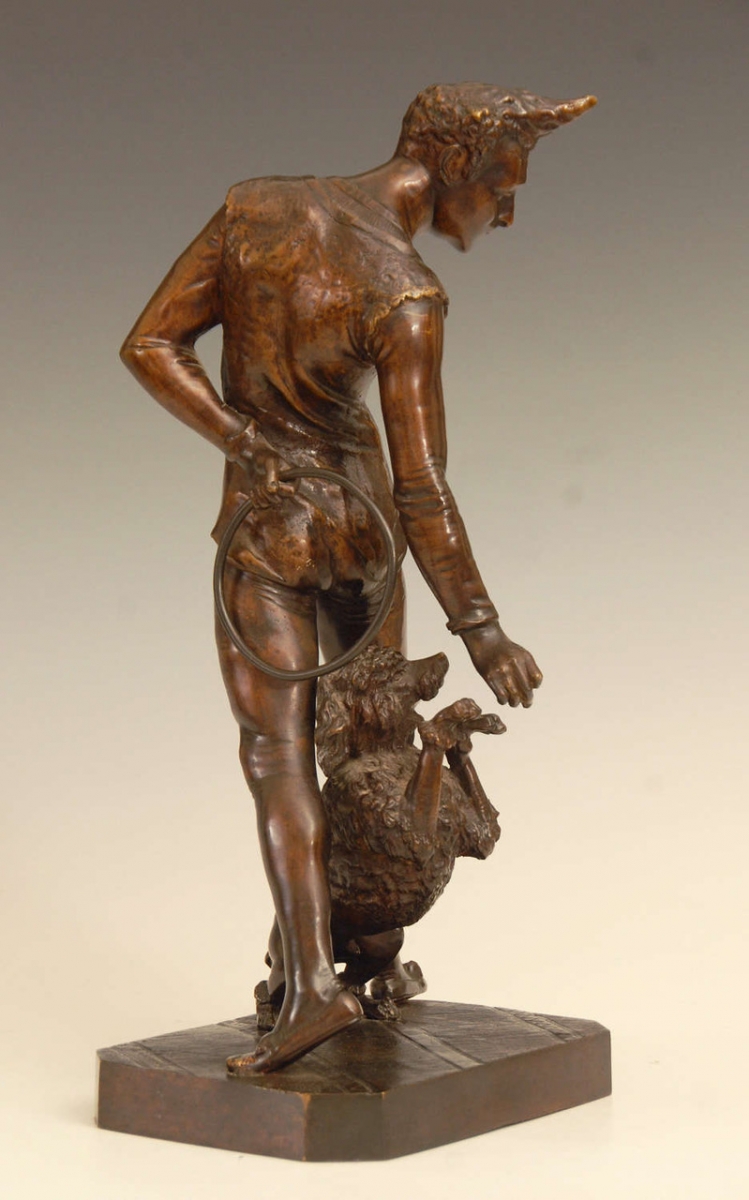 And, finally, a considerably smaller work: French sculptor George de Chemellier’s bronze group circa 1900, titled “Get Up,” of a clown dressed in a leotard with a hoop in one of his hands and his performing Poodle in a lion trim. This is currently with Great Grooms Antique Centre, Hungerford.

Clowns became an integral part of the modern circus, which was the invention of Englishman Philip Astley. In 1772 he travelled to Versailles to perform for Louis XV, and the king’s reaction was such that he opened a permanent circus in Paris in 1782. So popular did it become that at one time Paris had four permanent circuses, all of which drew large audiences.

Chemellier lived in Paris and so would have been familiar with Parisian circuses of which acrobats and clowns were a major part.

© Dog News. This article may not be reposted, reprinted, rewritten, excerpted or otherwise duplicated in any medium without the express written permission of the publisher.
Wed, 06/02/2021 - 2:19pm