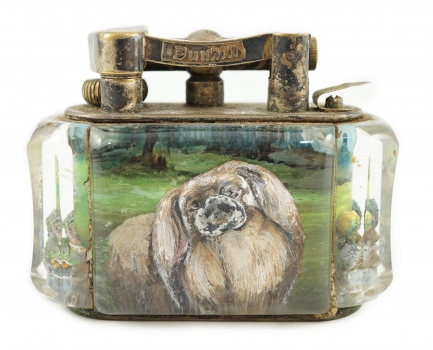 With an estimate of just £30-50, Adam Partridge Auctioneers sold a tinplate toy by the innovative French toymaker Fernand Martin to a collector in Portugal for £2,250. Modelled as a draft dog wearing what was known as a Flemish harness and pulling a cart with three bottles titled Anvers (Antwerp), it dated to the late 19th Century. Antwerp in Belgium was one of the major cities in Europe where dogs were used as draft animals. 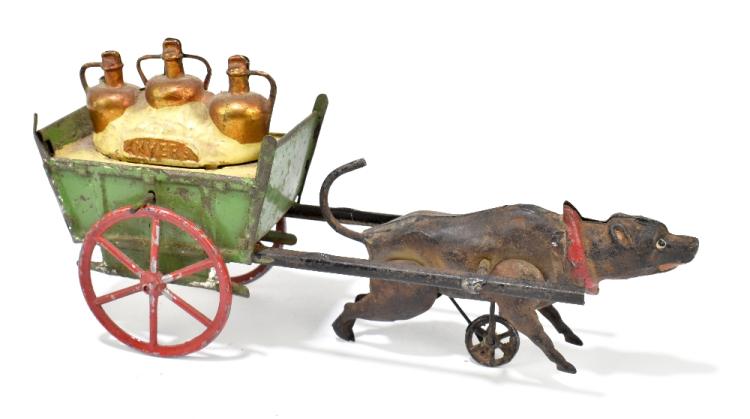 Changes in culture following World War II and the arrival of the motor vehicle heralded the end for draft dogs, many of whom were poorly looked after and pulled far too excessive loads along cobbled streets. 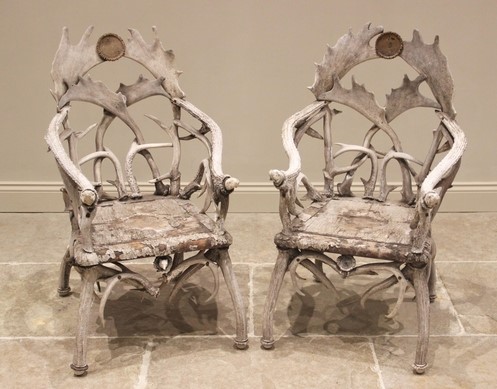 Trevanion Auctions offered a pair of Victorian chairs that had once been in the Grade II-listed Georgian Bostock Hall for £3,600. These were no ordinary chairs, but were made from red and fallow deer antlers and were notable for the terminals to the arms carved with dog masks. 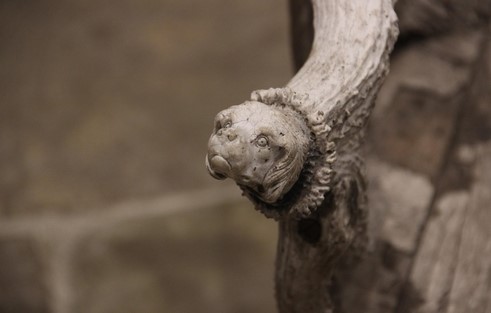 Antler furniture was hugely fashionable in Europe and North America in the second half of the 19th Century, championed by the Hamburg firm founded by Heinrich Rampendahl, an ivory carver and sculptor. He taught at the School of Applied Arts in Hamburg and exhibited antler furniture at the great exhibitions in London in 1851 and 1862. Rampendahl furnished the Horn Room at Osborne House on the Isle of Wight, one of Queen Victoria’s homes.

Hutchinson Scott sold a pair of 19th-Century cast-iron mounted hearth dogs for a double estimate £900. Modelled as two Greyhounds with decorated bodies, each hound sat on engraved brass cushions with chained raised side pieces on leaf decorated shaped bases with scrolled feet. They had the advantage of not being joined on a fender so would have fitted any sized hearth.

Franz Bergman opened a small bronze foundry in Vienna in 1860, producing mostly small patinated and cold-painted bronzes. So popular did Viennese bronzes become that by the end of the century there were about 50 workshops producing Vienna bronzes. Franz’s son, also Franz, inherited his father’s company and opened a new foundry in 1900. 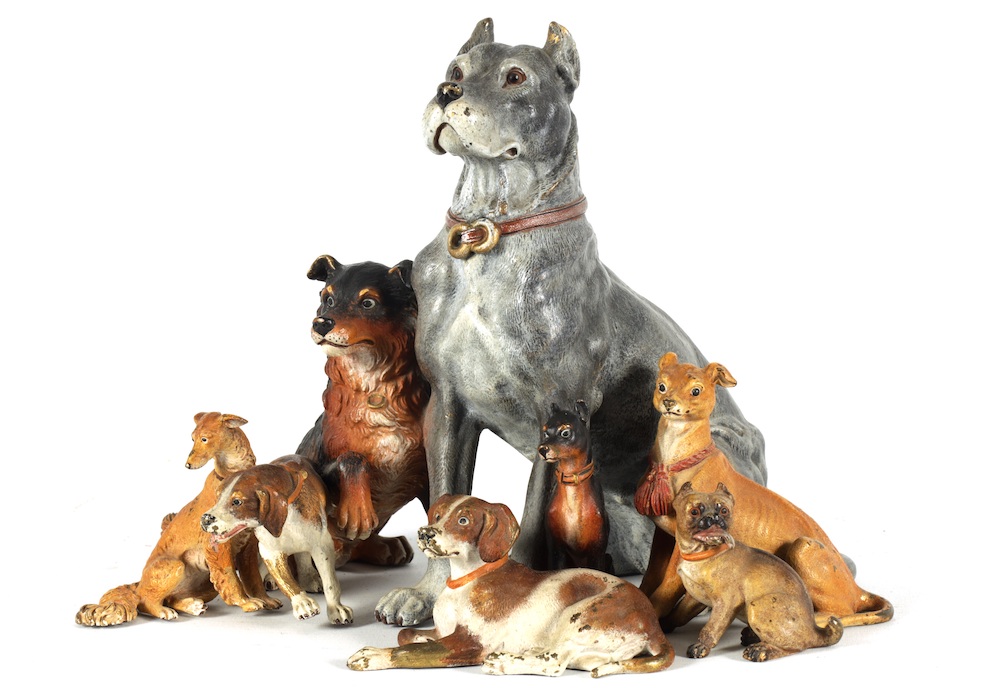 Dogs were always a popular subject, probably because of the vast number of breeds and the place they held in people’s hearts. Single dogs are commonplace, but a complete “kennel” is a rarity. Hutchinson Scott sold one such fine and rare late-19th-Century “kennel” for a near top estimate £4,200. It was stamped Bergman Austria and modelled as a triangle of eight dogs of various breeds. The top of the triangle was a cropped blue Great Dane.

Emigres Terry and Tena Wheeler settled in Australia, where Terry established a successful business in mining. In the late 1990s a chance encounter with a local antiques dealer resulted in a visit to an auction selling Royal Worcester. After making their first purchase on a whim, they were hooked. 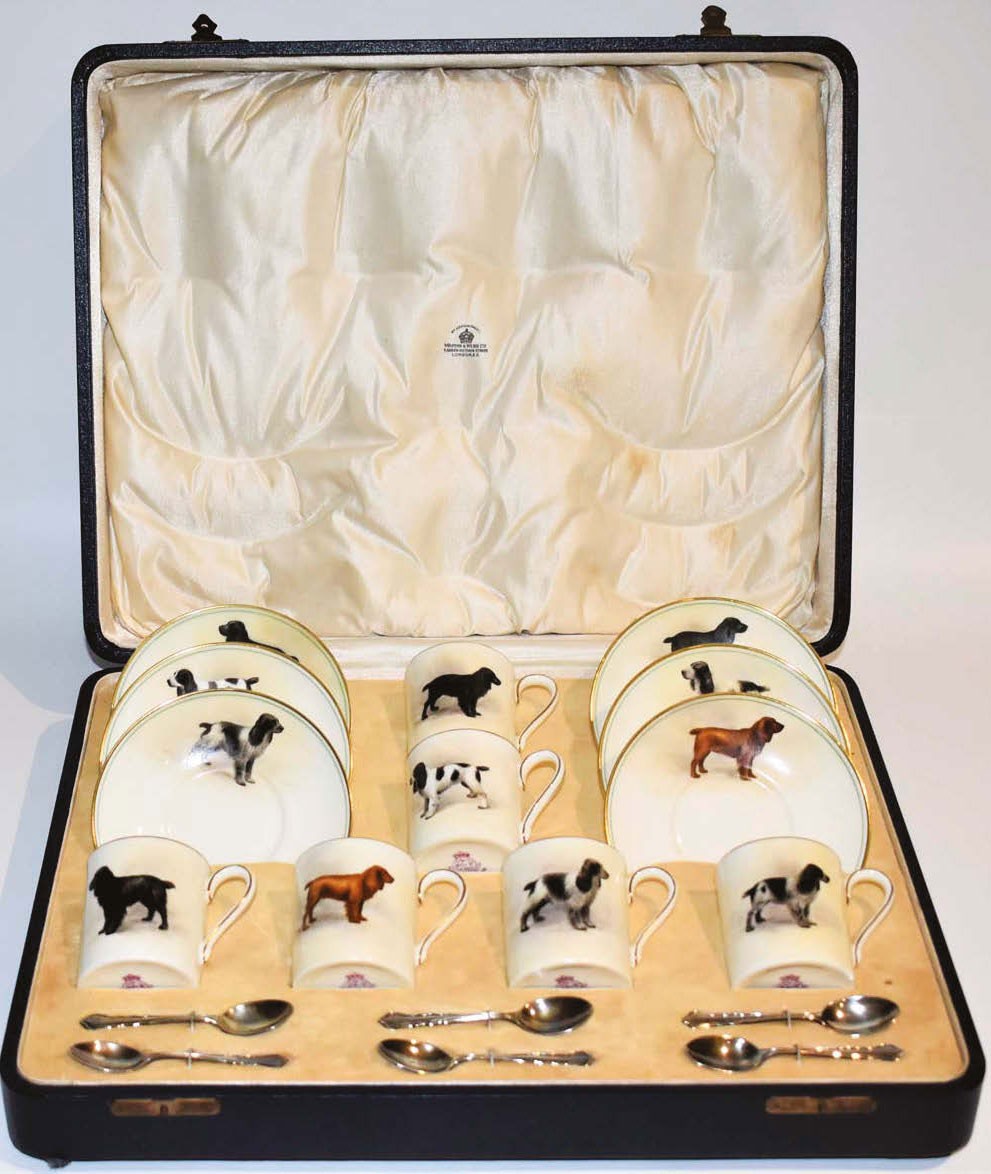 With advancing years and a family not interested, they decided to sell and asked Phillip Caldwell Auctioneers to sell 85 pieces. They were offered on site at the Wheelers’ home near Perth in Western Australia. One of the lots was a set of six coffee cups dated for 1934, with each cup and saucer painted with various Cocker Spaniels and signed G.H. Evans. They were contained in the original Mappin and Webb retailer’s case, complete with half a dozen spoons, and sold for Aust $2,400.

They were a departure from George Evans’ usual subject, which was landscape painting. Although there was no attribution, with such a specialist subject it’s not unreasonable to imagine them being a special commission. The variety of colors and the stance of each dog are indicative of them being copies of Thomas Fall photographs of H.S. Lloyd’s famous of Ware dogs. 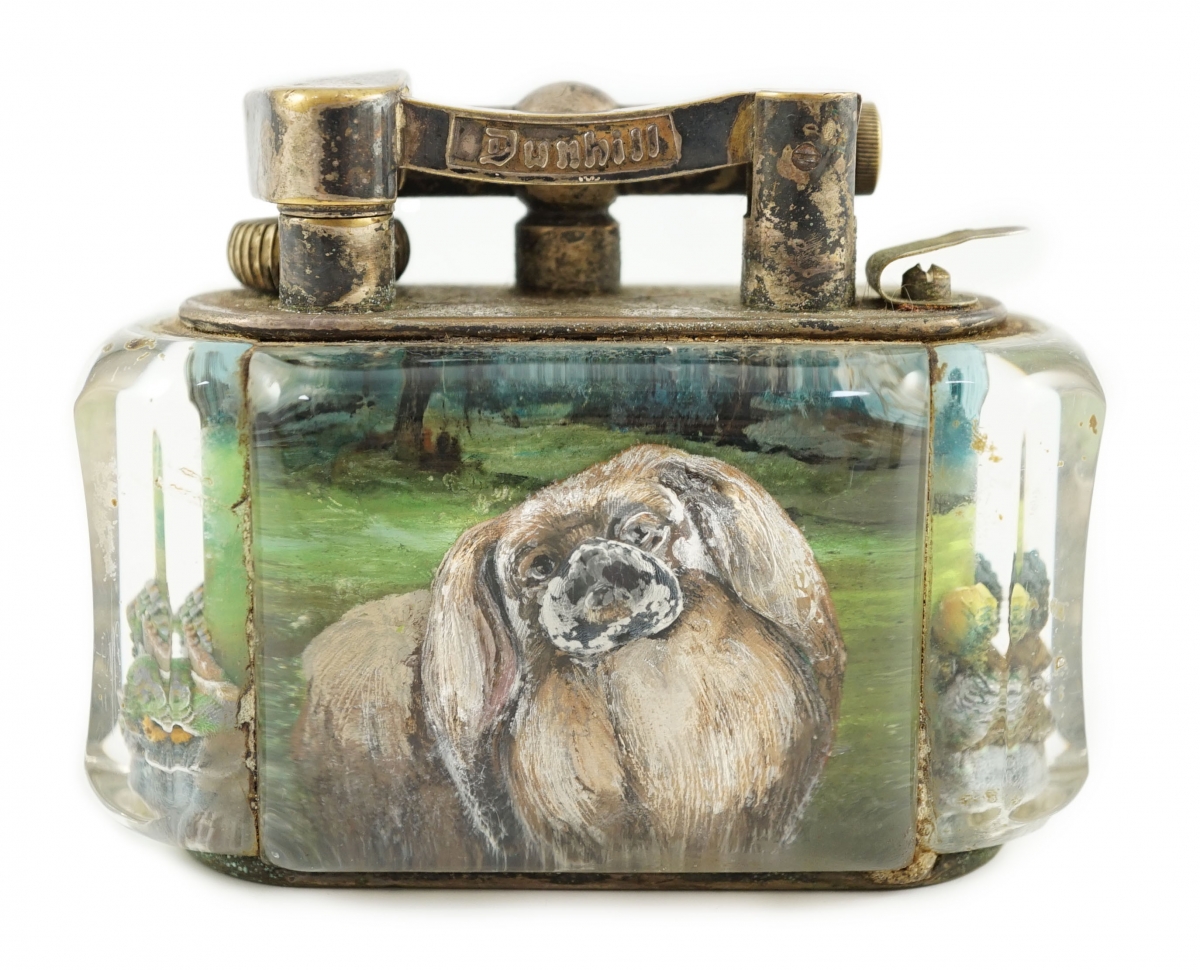 Most things connected with smoking are now passé, but Dunhill cigarette table lighters made of lucite, a transparent acrylic resin or plastic, are one of the exceptions. Gorringes Auctioneers sold a particularly rare one painted with a Pekingese in a landscape. Even with some obvious wear to the paintwork, it sold for £2,000.

One of the most important pieces of dog sculpture ever created and cast in bronze was sold by Beaussant Lefévre in Paris, the city where it was cast in 1906 by Parisian foundry Hebrard. Estimated at €30,000-50,000, it leapfrogged the guideline to sell for €235,500. 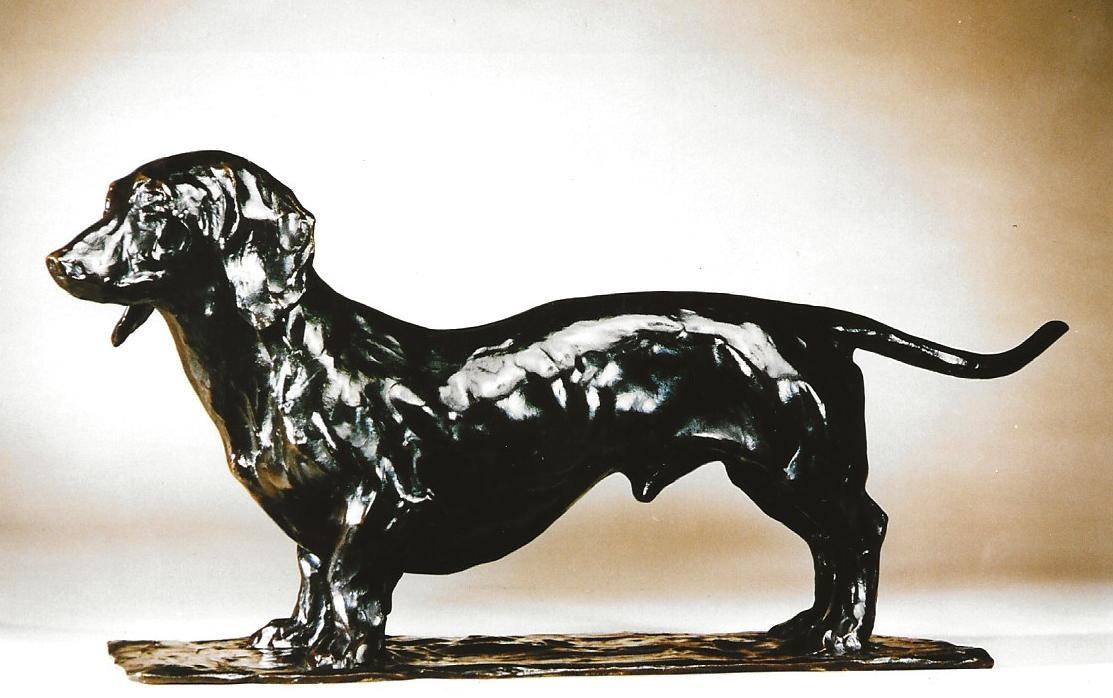 It was modelled by Rembrandt Bugatti, who was born in Milan in 1884, but along with the Bugatti family made Paris his home. It was modelled on his own Dachshund called Wurst, who had been given to him by the French consul in Antwerp and cast in an edition of five, of which Beaussant Lefévre sold number four.

Arguably the leading animalier of his time, along with 18 dog models Rembrandt created studies of exotic animals that he observed in the zoos at the Jardin des Plantes in Paris and Antwerp Zoo. At the outbreak of World War I in 1914, Bugatti had the trauma of tending the wounded in Belgium. In December that year he escaped via the Netherlands to his native Milan, with the aid of the French diplomat Crozier in Antwerp.

In 1915 Bugatti returned to Paris. The nightmare of the war, with other economic and personal pressures, led to a breakdown and in 1916 he committed suicide.

The name Bugatti immediately conjures up images of opulence, style and innovation. Rembrandt’s father Carlo is remembered for his furniture and brother Ettore for his automobiles.

© Dog News. This article may not be reposted, reprinted, rewritten, excerpted or otherwise duplicated in any medium without the express written permission of the publisher.
Thu, 01/19/2023 - 6:37pm