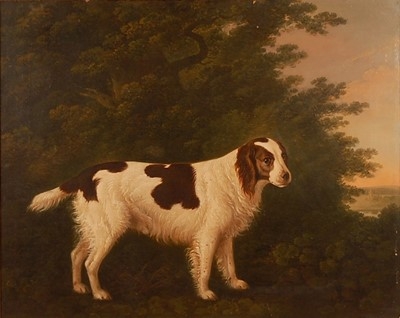 Purity of lineage in dogs is, in the grand scheme of things, a comparatively recent phenomenon that coincided with the formation of the Kennel Club in 1873.

For breed historians, defining as a breed the red/brown and white sporting spaniels featured by so many artists over the centuries is not an easy exercise. What is certain is that dogs of this type are behind what would become the Welsh Springer Spaniel, English Springer Spaniel and the now extinct English Water Spaniel.

Catalogued as a “Water Spaniel” (see photo at top of story), a particularly fine portrait of a dog against a woodland background by sporting artist John Boultbee Sr. (1753-1812) was sold by Lacy, Scott and Knight. Estimated at £6,000-8,000, it far exceeded expectations, selling to a major London gallery against two other determined bidders for £15,000.

Cecil Aldin (1870-1935) is one of the most popular and best-known British artists and illustrators, best remembered for his paintings and sketches of animals, sports and rural life. Dogs featured predominantly in his work, and many were ones he owned himself.

In a mixed sale of printed books, maps and decorative prints, Dominic Winter Auctioneers offered a selection of 25 “doggy” lots by Aldin, chiefly signed etchings but with a few originals. All got away, but most at the lower end of estimates. 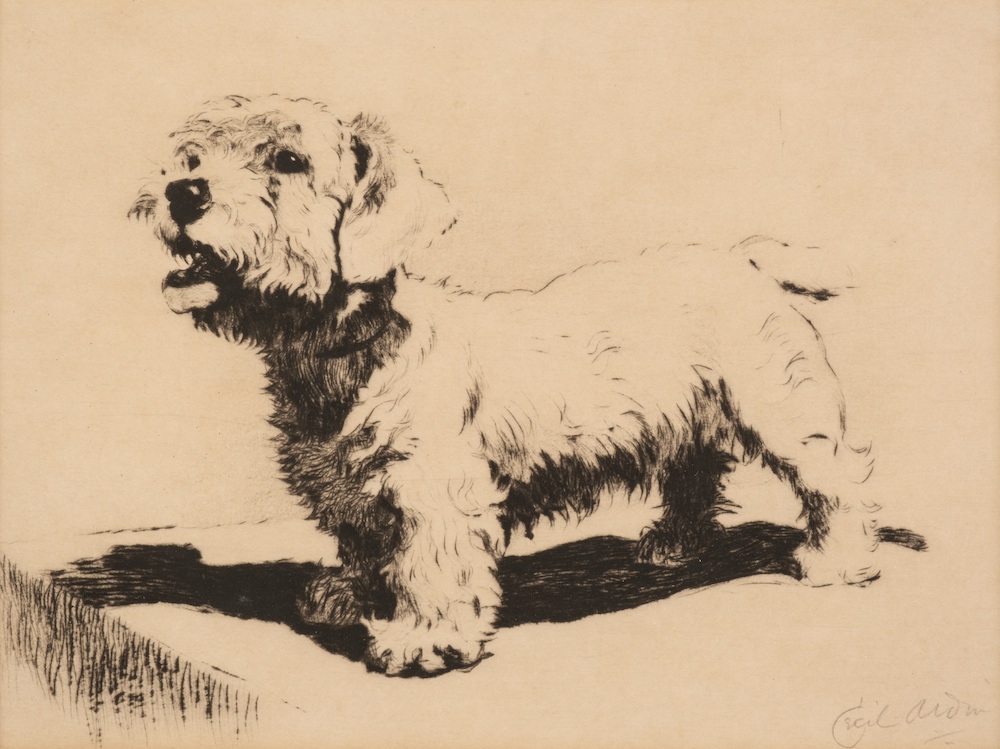 At the time Aldin was working in the 1920s and 1930s, two popular breeds were the Pekingese and Sealyham, and included in the etchings was a portrait of a Sealyham, possibly “Slickerson,” a neighbor’s dog that was one of his favorite models (£180), and “Susan” the Pekingese as a slumbering puppy (£160). 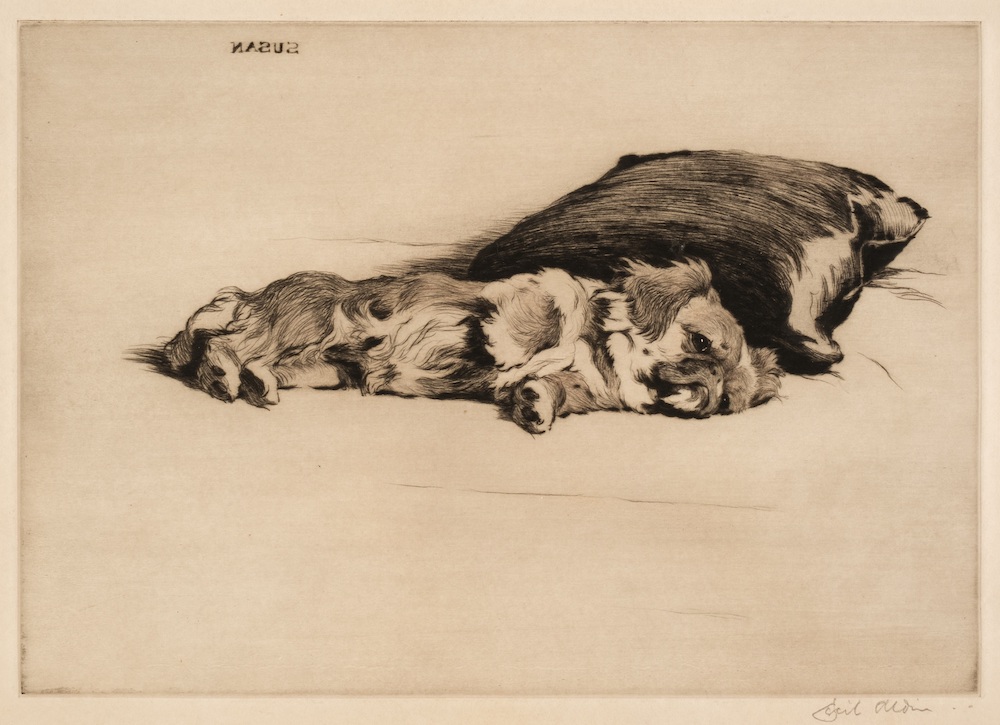 Henry Crowther was one of the most prolific dog artists whose work is an important visual record of British show dogs from the first half of the 19th Century. He had two distinctive styles, a close-up head study or a dog in profile, usually against a rural background. This portrait of a Cairn Terrier, painted in 1930 and which sold for £400, features “Ch. Fiery Stefan.” “Stefan” was owned by Mrs. Macneil, sired by “Peat Reek Out of the West” from the influential “Out of the West” kennel of Mrs. Fleming. Having obtained his UK title, Stefan was exported to America, where other “Fiery” Cairns left their mark. 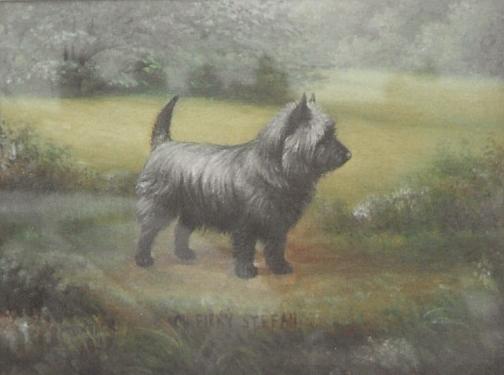 Louis Icart (1888-1950) was a French painter, graphic artist and illustrator who, when he arrived in Paris in 1907, decided to dedicate himself to art. Before World War I, he worked for the large French design studios and illustrated their catalogs. In 1914 he met 18-year-old Fanny Volmers, an employee of the Paqiuin fashion house, whom later he married and who was the model for many of his works.

Icart served as a fighter pilot in the first world war, and on his return followed his passion for art, making etchings of his work, mostly using aquatint and drypoint. Because of the great demand, he often published two versions, one for the European and another for the American market. 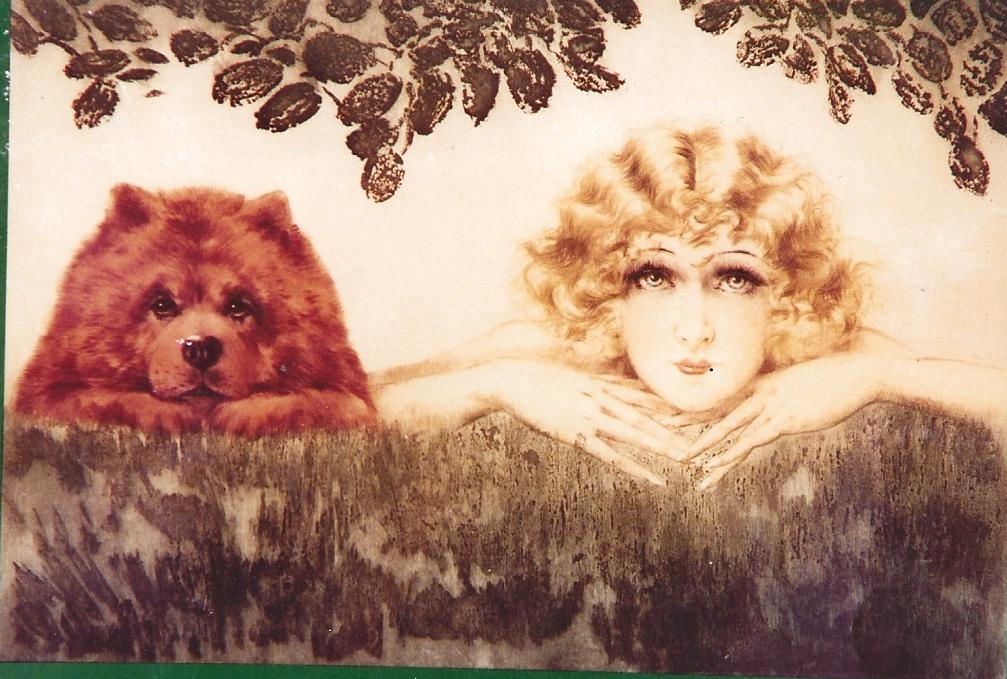 In the late 1920s, Icart was very successful both artistically and financially, the popularity of his etchings peaking in the Art Deco era. The drypoint etching with aquatint and hand coloring, “Two Beauties,” was published in 1931 in an edition of 350. The two beauties are Icart’s wife Fanny and the family Chow Chow, appropriately named “Dollar” as he was purchased in America. Copies have appeared at auction in recent years, one selling in America for $4,000 against a top estimate of $2,000. 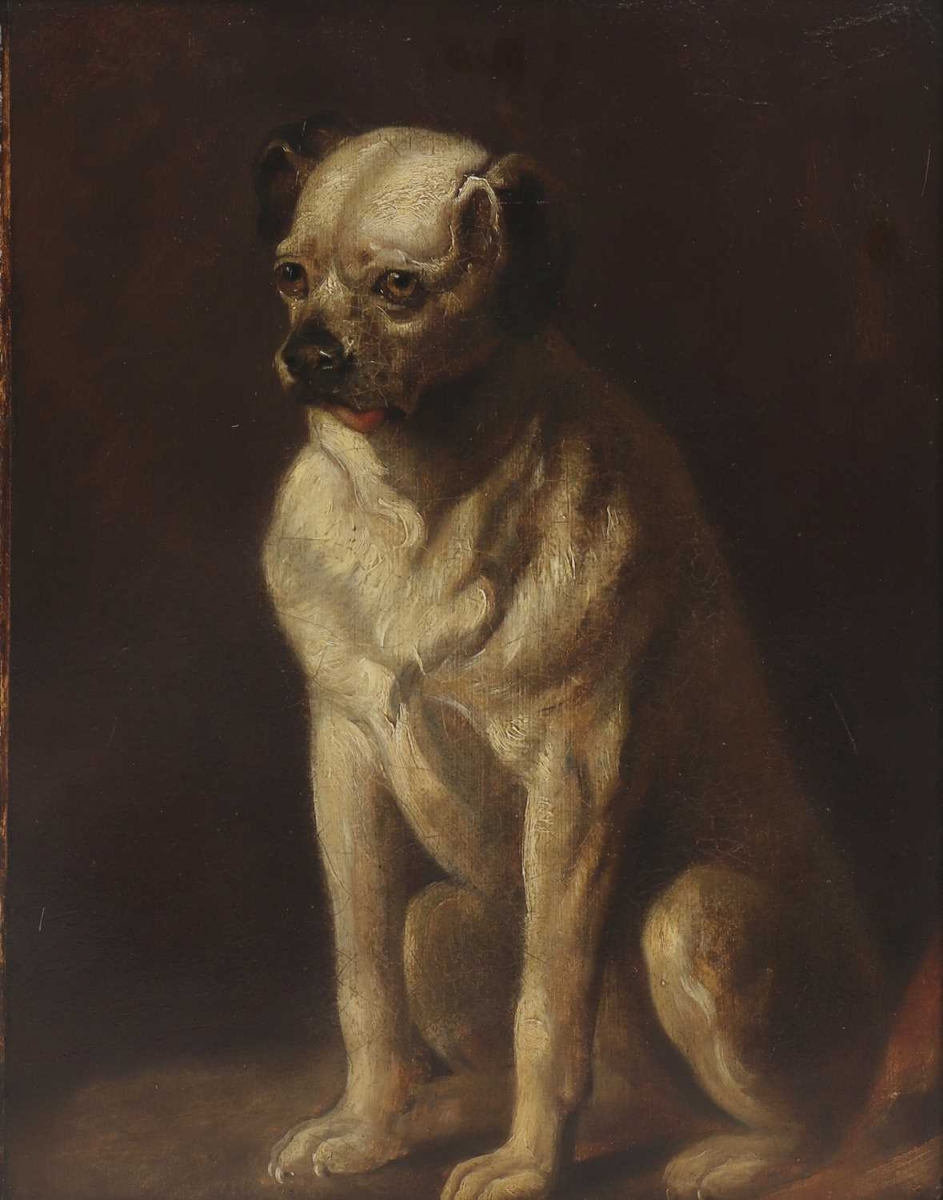 William Hogarth’s (1697-1764) celebrated self-portrait of the artist and his beloved Pug “Trump” is now in Tate Britain. It was reproduced many times in print form and much copied by succeeding artists, as was Trump on his own. The owners of the version here of Trump bought it from a general dealer and, wanting to know more about their dog, took the picture along to a BBC Antiques Roadshow that was being filmed locally.

The expert immediately recognized the dog as copied from the famous picture, but who painted it? Could it perhaps have been by Hogarth himself? After discussion with several Hogarth authorities, the owners were informed that their picture was deemed to be a good 19th-Century copy, possibly executed in the National Gallery, where, in the 19th Century, artists were given out-of-hours access to copy any chosen work.

The owners decided to sell the picture, and auction house Sworders found it a new home for £2,200, the lower end of expectations.

Every once in a while, something special appears on the market, and that happened very recently in Ireland, when Adam’s Auctioneers sold an important Chinese School scroll on silk. It was inscribed with the signature of Giuseppe Castiglione, also known as Lang Shining (1688-1766). Castiglione was an Italian Jesuit brother and missionary in China, where he served as an artist at the Imperial Court of three emperors. He painted in a style that is a fusion of European and Chinese traditions.

The scroll was inscribed with the artist’s signature, calligraphy and bore five red seals. The hounds have been identified as “Moyuli” and “Jinchixian,” two hounds of the Emperor Qianlong. It had an impressive provenance: Juan Carlos Ketzenstein, an Argentinian diplomat, who was an ambassador in Beijing, the Holy See (Vatican) and the Sovereign Order of Malta.

It was offered at auction with documentation, including the book “Giuseppe Castiglione: A Jesuit Painter at the Court of Chinese Emperors.” It was contested by bidders from all over the globe, selling finely over expectation to a collector outside Ireland for Euros 110,000. 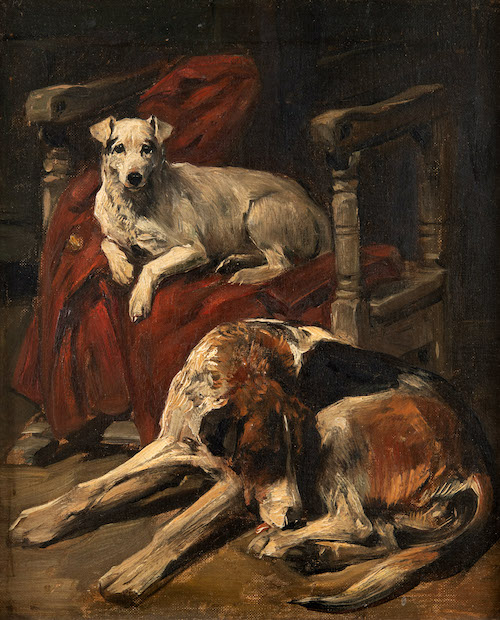 The unsigned canvas of a terrier and Foxhound was offered by Lawrences of Crewkerne in the 1950s, when it sold for £4.10s (roughly £300 in today’s money). The buyer, then a young man who had a fondness for country sports (and later became a master of Foxhounds), recognized it as a work by John Emms (1844-1912), but not only that, a particularly fine work, well observed and sympathetically executed by someone who understood the subjects. Emms specialised in terriers and hounds, and is the only British dog artist working in the late 19th Century/early 20th Century whose work has rocketed in value in recent years.

Treasured for more than 65 years, this characterful painting is now coming back to Lawrences, when it will be sold toward the end of July with expectations of £12,000-18,000.

© Dog News. This article may not be reposted, reprinted, rewritten, excerpted or otherwise duplicated in any medium without the express written permission of the publisher.
Sat, 07/03/2021 - 12:36pm