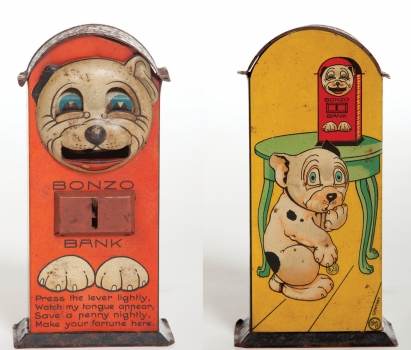 Eight very different lots, ranging from a few hundred dollars to well over a half-million
By
Nick Waters 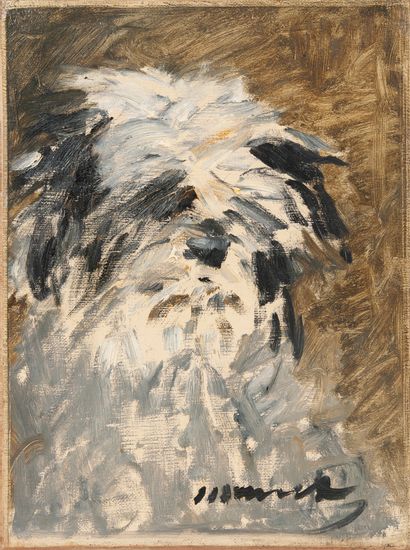 I’ve commented before on the diversity of items available on the dog in art, probably more so than any other subject. This feature offers a selection of eight very different examples – with prices ranging from a few hundred dollars to well over half a million – that have appeared in the auction houses of Europe.

The charming portrait offed by Drouot Estimations in Paris is of a little dog named Minnay owned by Marguerite Gauthier-Lathuille, whose father ran a cabaret near the Café Guerbois, an area of Paris frequented by the Impressionists.

Painted in 1879, it came to auction by family descent and had been reproduced in various publications from 1930. What’s in a name? Everything in the art world, for Minnay’s portrait was painted by Édouard Manet (1832-1883), the French modernist painter whose early works caused great controversy and served as rallying points for the young painters who would create Impressionism. It was offered with a group of related family documentation and sold for double its estimate at €520,800.

In Genoa, Italy, Wannenes Art Auctions sold an incredibly beautiful and detailed 19th-Century Carrara marble group by the Florentine sculptor of the late-Neoclassical period, Odoardo Fantacchiotti (1811-1877). He studied at the Accademia di Belle Arti di Firenze, first exhibited in 1828 and has many works on public exhibition, including the Uffizi Gallery in Florence and the Victoria and Albert Museum in London.

The three-foot-diameter group, set on a wooden plinth, features Cupid sleeping against a large Newfoundland and is titled “Amore et Fedelta” (“Love and Faithfulness”). The inscription on the base translates as “Her Royal Highness, Eugenio of Savoy Carignano. Odourdo Fantacchiotti sculpted it in Florence in the year 1864.” Against a top estimate of €15,000, it sold well in excess at €110,000.

The origin of ship figureheads goes back thousands of years, up to the ancient Greeks and beyond. Most were carved in wood, and the figurehead here was carved in lime wood by James Hellyer of Hellyer and Sons. The family became famous for their carvings used in H.M.S. Warrior and the Cutty Sark and were active as carvers for about 400 years. This figurehead was carved to order from R. & M. Ratsey’s yard, West Cowes, Isle of Wight, in 1867. It was the figurehead of the Yacht Gelert, Royal Yacht Squadron, built for Col. Edward Lloyd, a prominent member of the R.Y.S., and launched by his cousin, Mrs. Sandford.

Sold in 1880, it had some illustrious owners at the end of the 19th Century. It was bought by the 5th Earl of Wicklow and was succeeded in ownership by the 6th Earl. In 1890 it was bought by Prince Henry of Battenberg, who had married Princes Beatrice, daughter of Queen Victoria.

It was named after the legendary Gelert of Welsh folklore, which is usually portrayed in modern times as a Deerhound. The legend is played out in Bedgelert, North West Wales, and Gelert saved his master’s son from being savaged by wolves, only to be mistakenly slain by his master, Llewelyn the Great. It was sold by marine specialist auctioneers, Charles Miller, for £52,000. 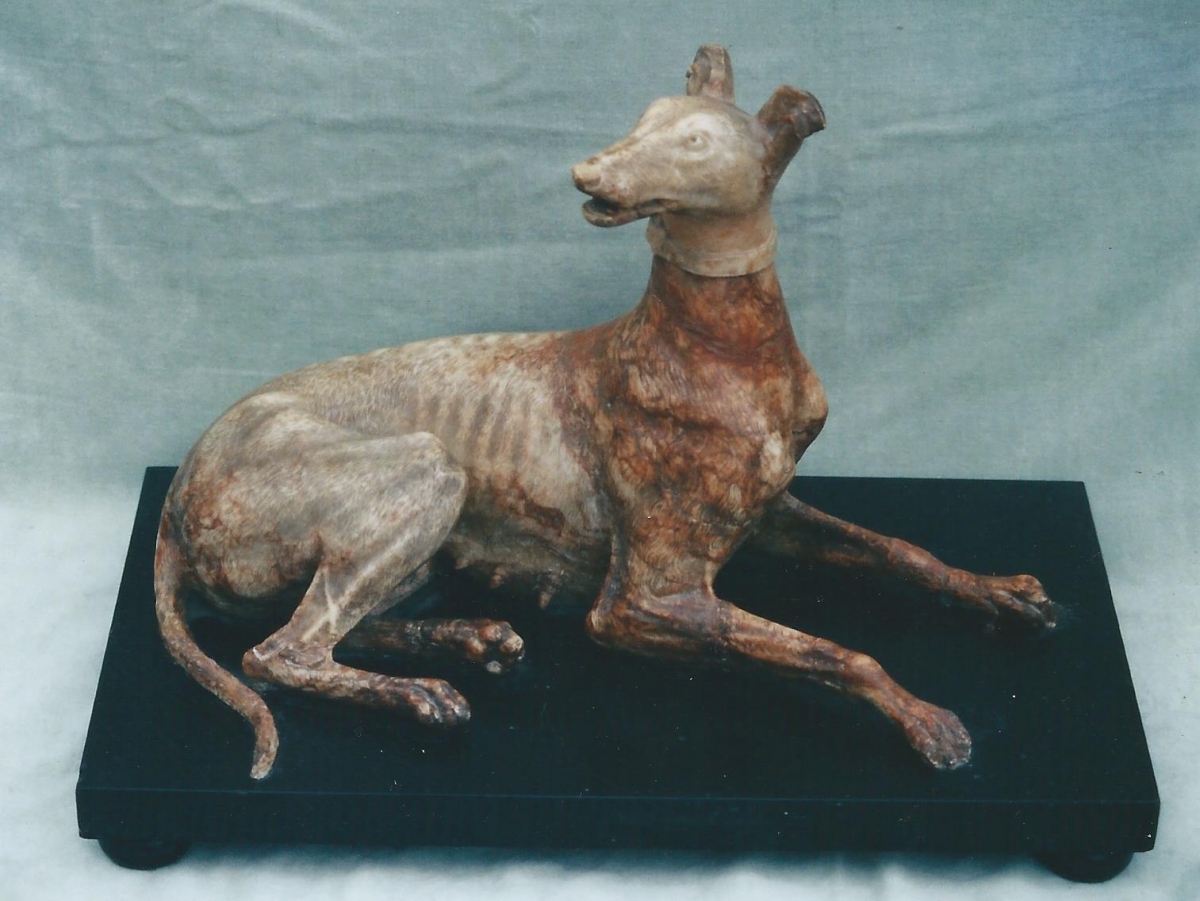 The carved marble Greyhound, probably Roman 18th Century, is mounted on a 21-inch-long, later rectangular black marble plinth raised on bun feet. It was sold by Bonhams for £16,200. The dog is carved after the antique, wearing a collar and the definition of the bitch’s teats indicates that she could have been off a litter, suggesting that it may have been a portrait carving of a particular bitch.

It had been acquired by the vendor, a successful breeder of Italian Greyhounds in England, from a fellow Italian Greyhound breeder who in turn had inherited from his father in Italy before the Second World War. 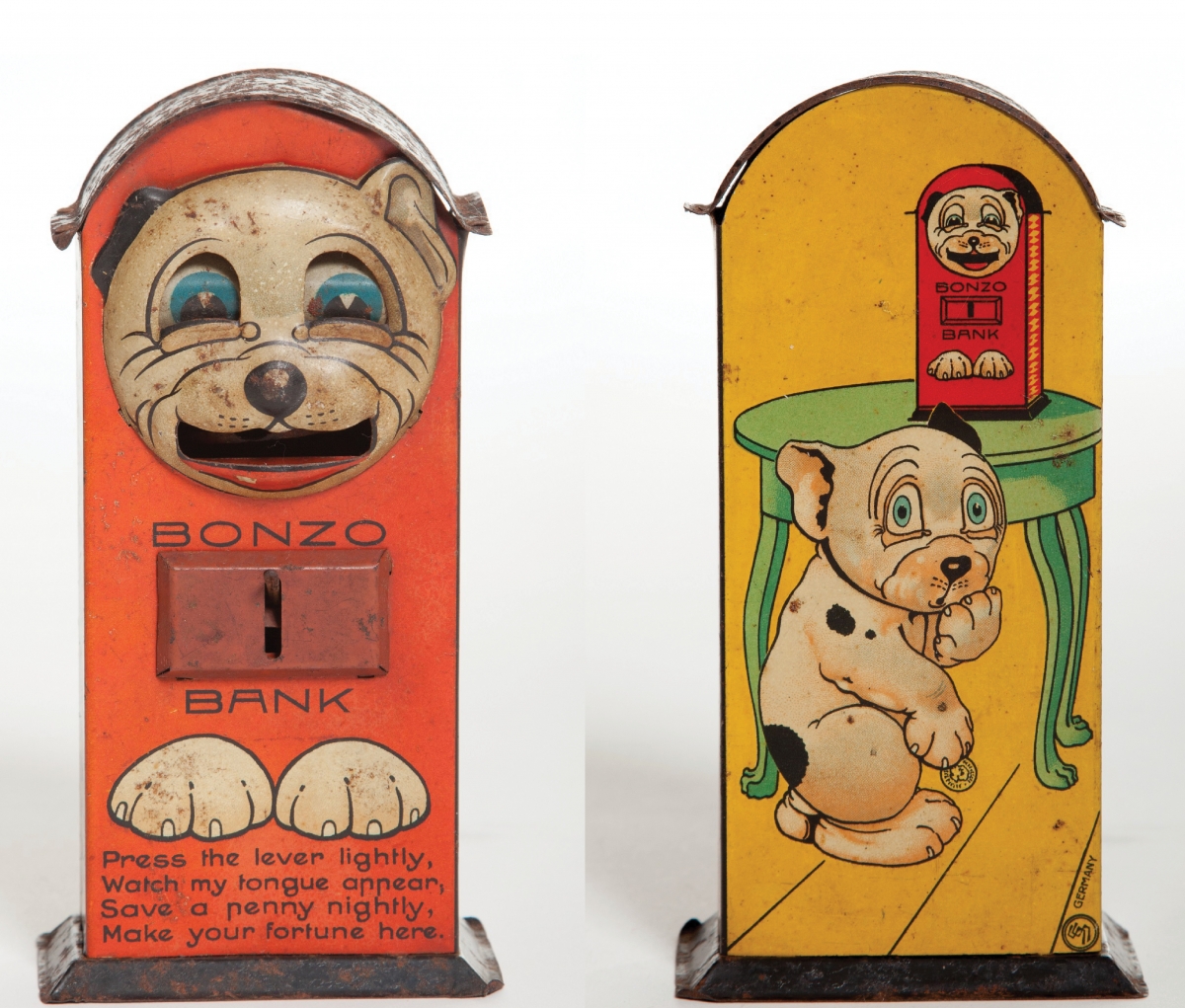 Bonzo was a cartoon character, the creation of commercial illustrator George Studdy (1878-1948) in 1922, and first appeared in “The Sketch Magazine.” He soon became a phenomenon worldwide with a host of Bonzo collectables and memorabilia. This rare seven-inch-tall Bonzo mechanical toy bank was sold by Mealy’s in Castlecomer, Ireland, to a collector for €8,500 against an estimate of €1,000-1,500, showing just how strong the market is for these banks of yesteryear.

The bank was inscribed on the front “Press the lever lightly/ Watch the tongue appear/ Save a penny nightly/ Make a fortune here” beneath an expectant Bonzo with his mouth open, ready to receive the pennies. The back shows a rather puzzled-looking Bonzo, his one front paw to his mouth, beside a table on top of which is a Bonzo bank.

Germany was the principal manufacturing country for tinplate toys, and this bank was made there by Saalheimer and Strauss prior to 1929.

The royal seal was sold by Hermann Historica in Munich, Germany, for an above estimate £1,800. The silver-gilt and ivory seal has a finial in the form of a French Bulldog’s head with ruby eyes, a crowned monogram “E” for Edward and the motto of the Order of the Garter, which translates as “Shame On Him Who Thinks Evil Of It,” carved into the seal’s surface. There is debate as to which of two royal monarchs it had belonged, Edward VII or his son Edward VIII.

All British monarchs are head of the Order of the Garter, and Edward VII is, to my mind, the most likely contender. He was a great lover of French Bulldogs (his first he named Peter), whereas Edward VIII favored Cairn Terriers and later Pugs.

The painting “Still Life with French Bulldog Model” by Italian artist Mario Simoni (1885-1953) was sold by John Nicholson for £300. Simoni was a landscape and still-life painter who often featured a ceramic model beside the main subject in his still-life paintings. The French Bulldog in this picture is from an unknown German factory and produced circa 1930. 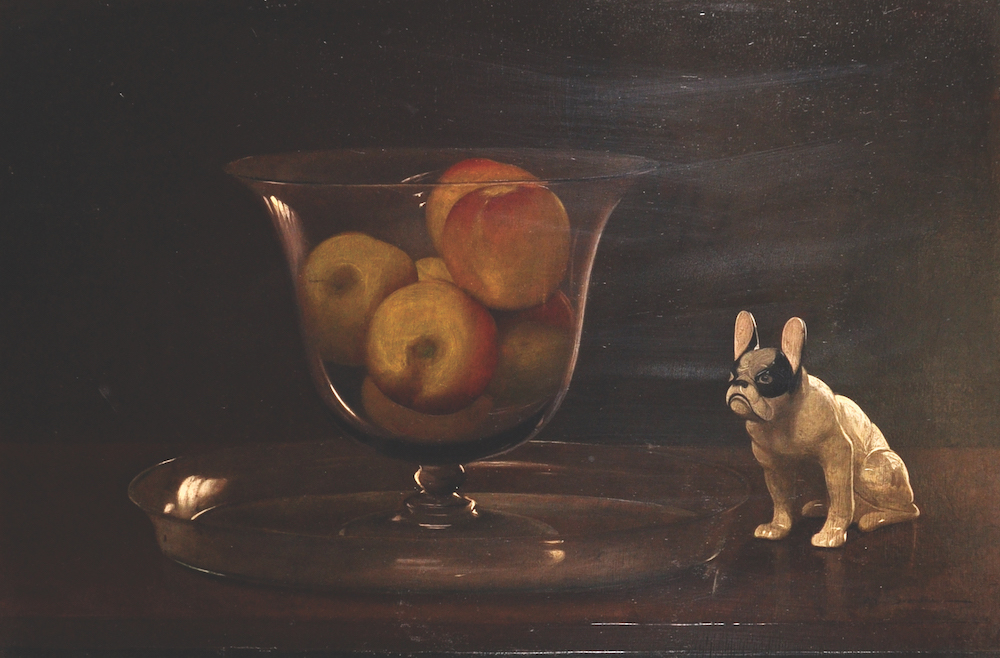 Simoni was a master at still-life painting, and the translucency and delicacy of his treatment of the glass is such that one could almost lean forward and pluck the fruit from inside the bowl. 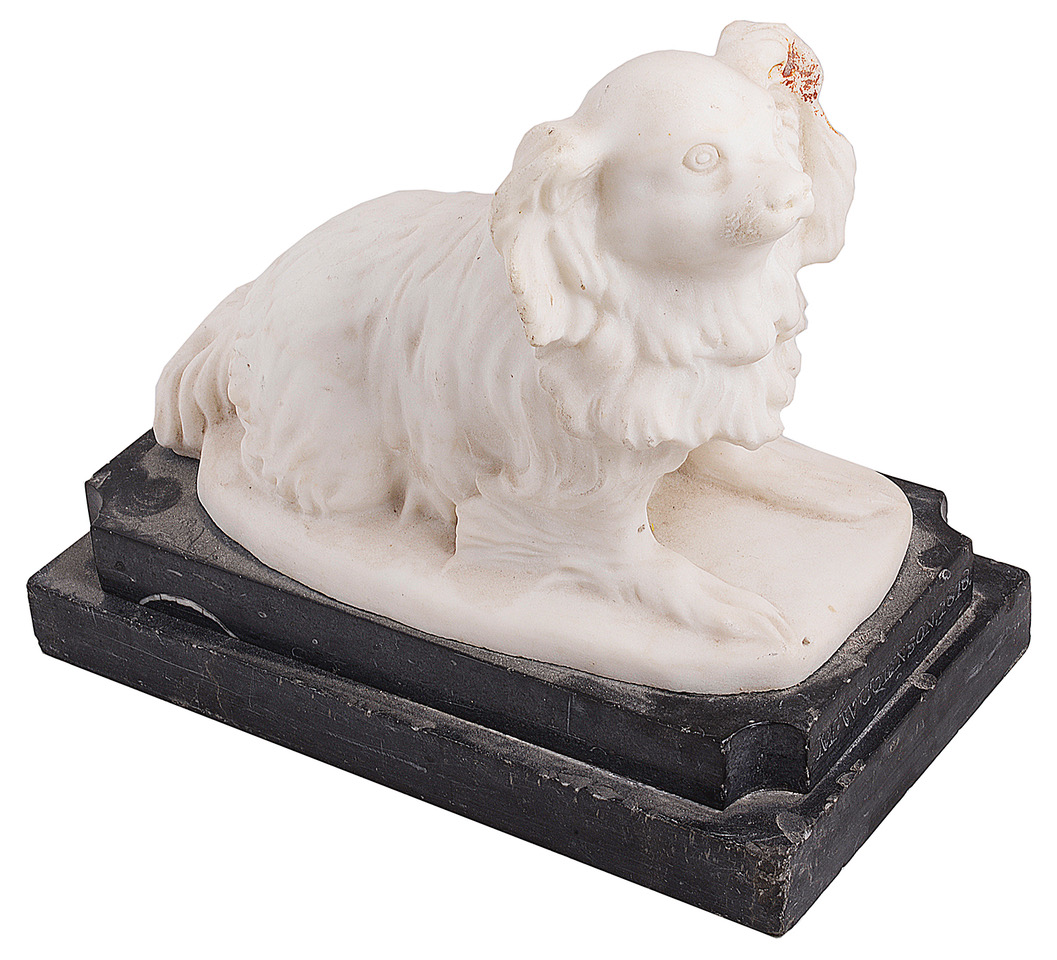 Finally, a small carved marble model of a Toy Spaniel signed “M.W. Johnson 1818” sold by Catherine Southern for a mid-estimate £320. Matthew Wharton Johnson (1800-1881) was a London-based monumental mason and sculptor. There are a variety of his works in churches in and around London, and his work has been identified as far afield as Australia, India and Barbados.

© Dog News. This article may not be reposted, reprinted, rewritten, excerpted or otherwise duplicated in any medium without the express written permission of the publisher.
Sat, 05/01/2021 - 11:04pm