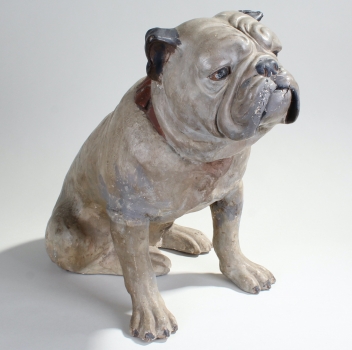 When I was dealing in antiques, art and ephemera in their broadest descriptions connected with the Bulldog “grew on trees.” From the largest, poshest antiques fairs and specialist auctions to lowly car-boot and garage sales, one was always guaranteed to find something on the breed. Fortunately, from a dealer’s point of view, there were always collectors out there eager to buy.

This feature moves away from mainstream pictures and ceramics, and focuses on the less usual.

Spillers as a milling operation was founded by Joel Spiller as long ago as 1829. In 1859 they started manufacturing ships’ biscuits; biscuits for dogs were a natural progression and soon followed. Popular brands of the 20th Century were Spillers Shapes and Winalot, the latter first aimed at the racing Greyhound market.

Spillers became the brand leader in the 1930s, and the impressive composition sitting Bulldog (above) used as an advertising piece is from that period. The models would have been issued to retail outlets for display and to promote the brand. Consequently, as they were never for sale on the open market, they rarely appear on the secondary market. 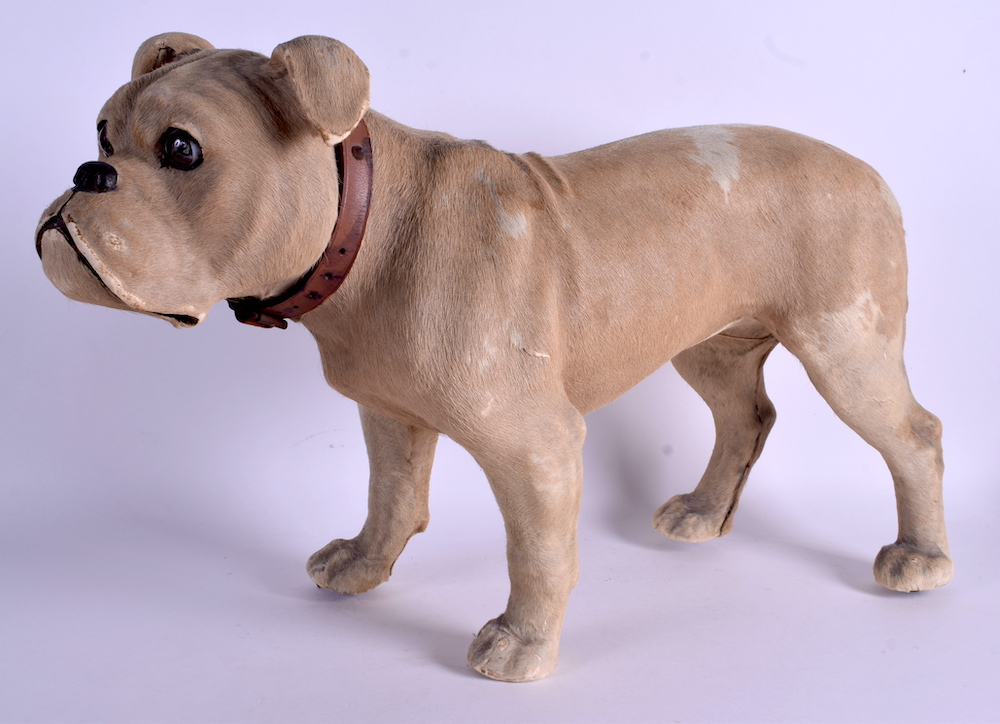 The fawn-colored, plush-covered dog wearing a collar and with a rather worried expression is a pull-along toy from the early 20th Century. A lead to pull the dog along would have been attached to its collar. Such toys were never cheap and became popular at seaside resorts, where the children of wealthy parents would pull them along as they paraded on the promenade. 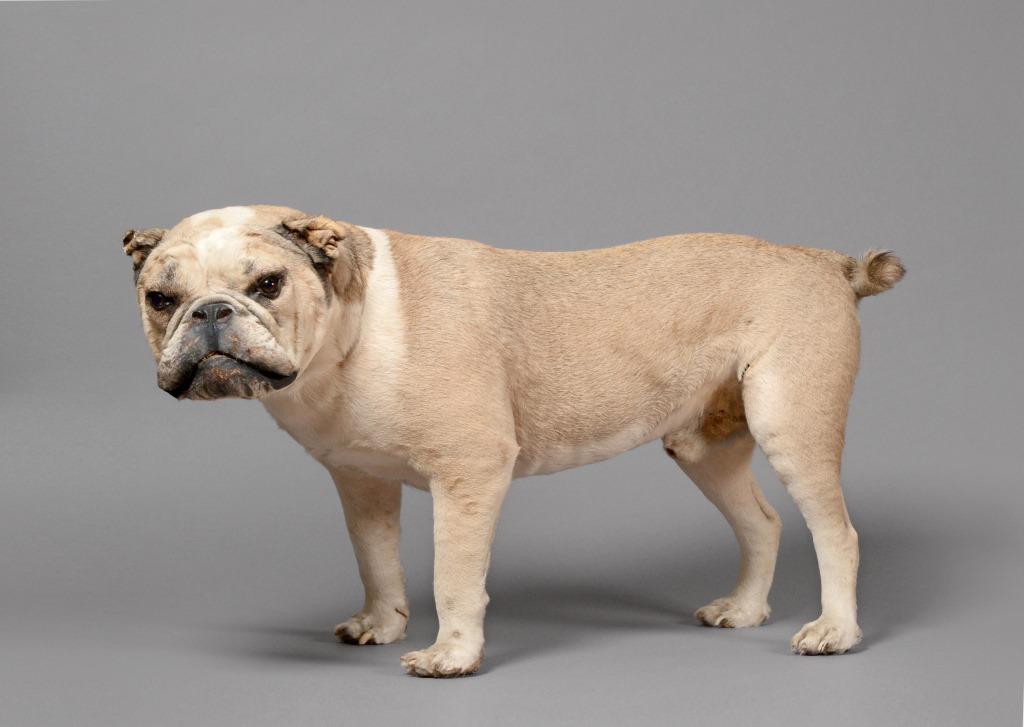 The second fawn dog looking to its left is a taxidermy specimen, also from the early 20th Century. The practice of preserving skins of birds, animals, fish and reptiles came to the fore in Victorian society and in particular following the Great Exhibition of 1851 in London. There were several improvements in methodology and skill in the years that followed. For much of the 20th Century it fell out of favor, but this century has seen a renaissance, with many hundreds of pounds being paid in the UK for cases of birds and animals.

Dogs were never a popular subject, possibly because when a treasured pet had died, the last thing the owner would wish to do was look at its stuffed skin. Comparing the taxidermy specimen alongside the pull-along toy, the creators of the toy did a very good job of giving the covering a realistic look. 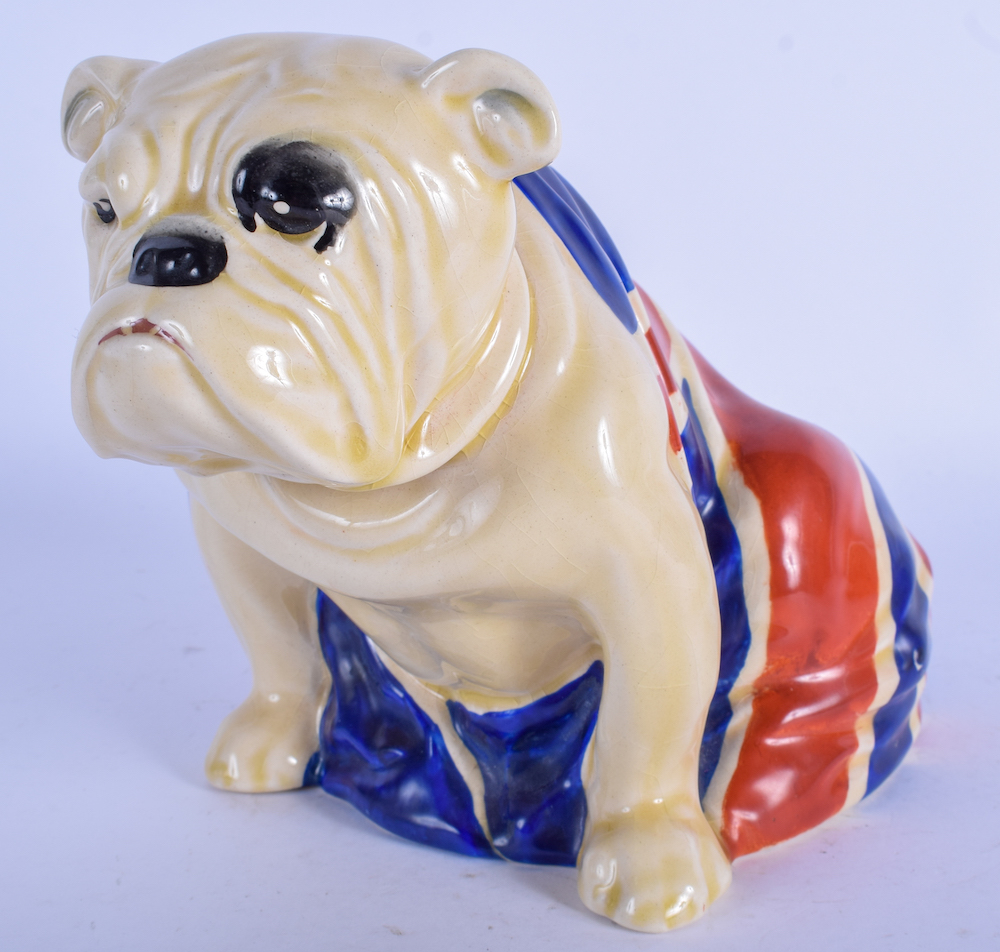 In 1941 Royal Doulton introduced into their range a sitting Bulldog draped with the Union Jack. The same year they brought out an identical model wearing a Trinity Cap, one of the hats favored by Churchill, and also a model wearing a derby hat. All were produced in three sizes from a model by Charles Noke, who died in 1941.

Noke had previously worked for Royal Worcester, joining Royal Doulton in 1889 as chief designer, later becoming art director. He contributed significantly to the character studies and is also well known for launching the HN figurines, which include many of Royal Doulton’s dogs. 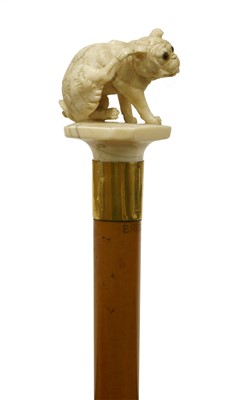 Walking canes have a dedicated band of collectors, and anyone wishing to use dogs as a theme could, with little difficulty, build up an interesting collection. An example of the more intricate and unusual is this carved ivory model sold by Sworders of a Bulldog set with ruby eyes, sitting on an ivory base. Scratching behind its right ear, it is mounted on top of a Malacca cane.

Another popular field of collecting is vesta cases. These are compact in size and made of gold, silver or silver plate just large enough to hold and protect sufficient matches required for a day’s smoking in the late 19th and early 20th centuries. Vesta cases prevented matches from becoming damp and therefore useless, and would protect the smoker. In the days before safety matches, these dangerous matches could ignite spontaneously from heat or friction, often explosively, and thus were a potential danger if carried loosely in the pocket. 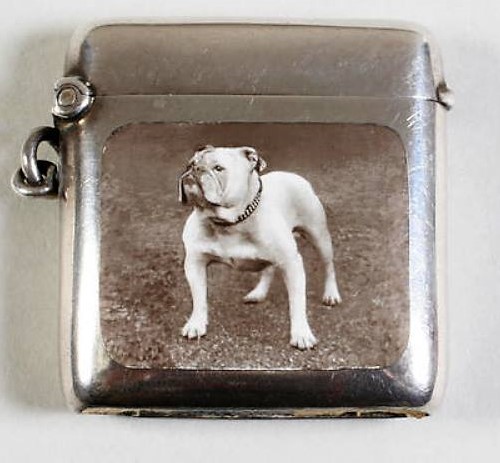 The silver example set with an image of Ch. Nuthurst Doctor was made by Horton and Allday, Birmingham, and hallmarked for 1908. It is inscribed to the reverse: “To Sam Walters in commemoration of Ch. Nuthurst Doctor’s retirement from the show ring June 1904 to October 1908 from his owner.” His owner was Mrs. E. Waterlow, breeder E.A. Vicary, and he was born in 1901. 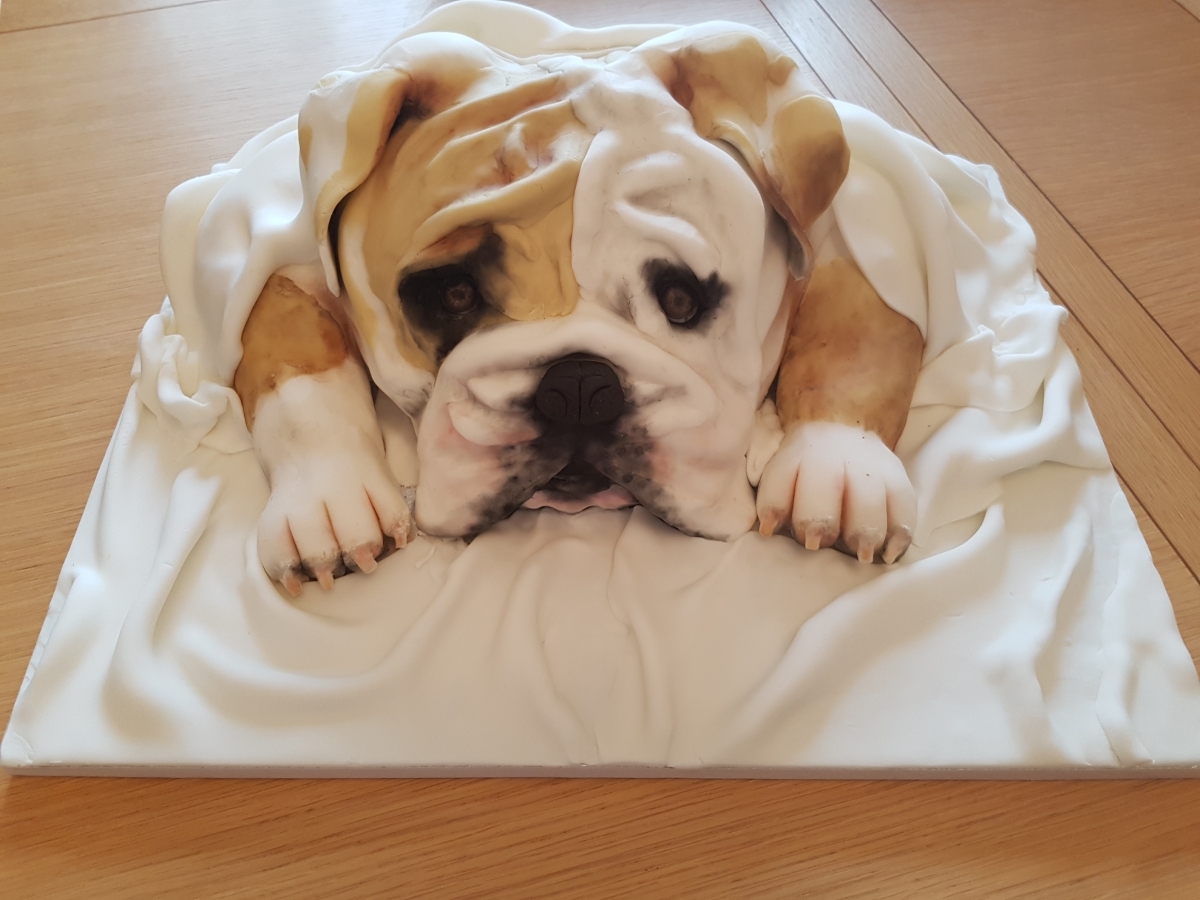 Such is the diversity of art connected with dogs that the Bulldog peering out from a sheet that is wrapped around it is in fact a cake, the creation of Leanne Foster. Following five years in the army as a military lorry driver, and a spell in pharmacy, Leanne turned her attention to designing cakes and now runs her own successful business, Cake House.

John Bull is a national personification of the United Kingdom in general and England in particular, especially in political cartoons and graphic works. He is usually depicted as a stout, middle-aged, country-dwelling, jolly matter-of-fact man wearing a Union Jack waistcoat, as is the fiberglass example smoking a cigar and standing nearly three feet tall. 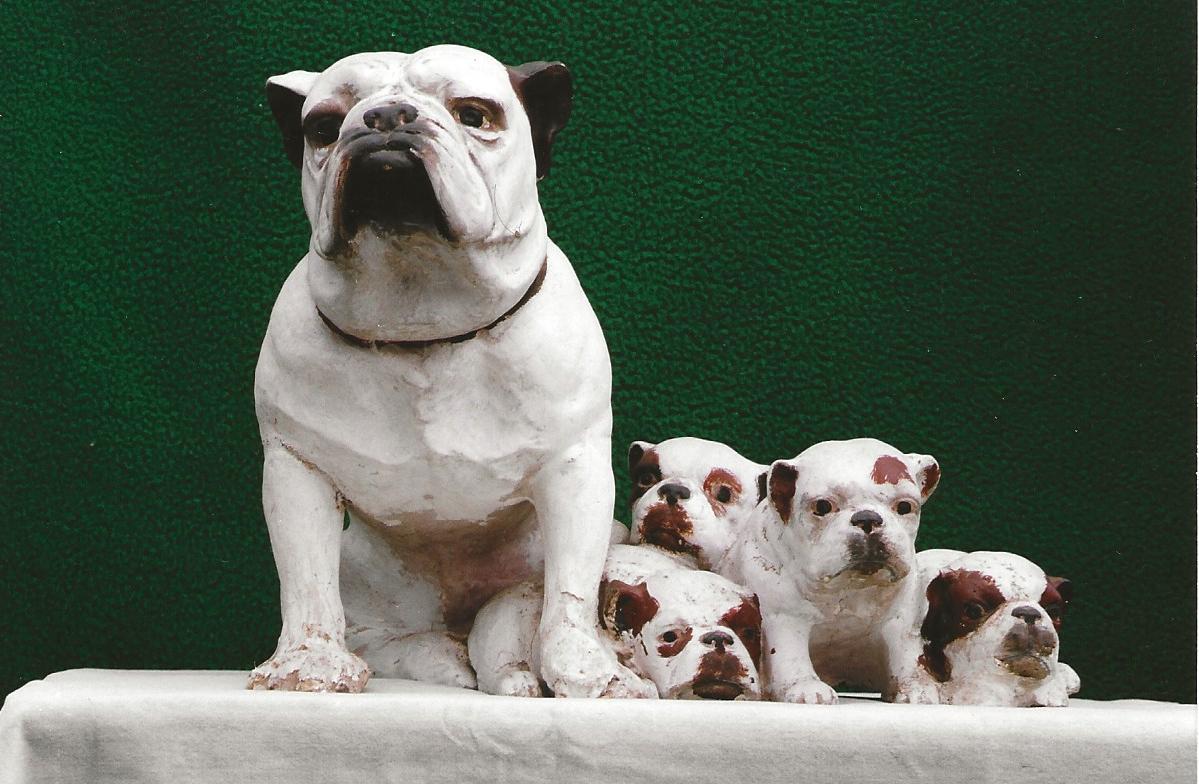 Another modern piece is the Bulldog family, a mother and her four puppies. Lifesize, they are made of molded painted resin. 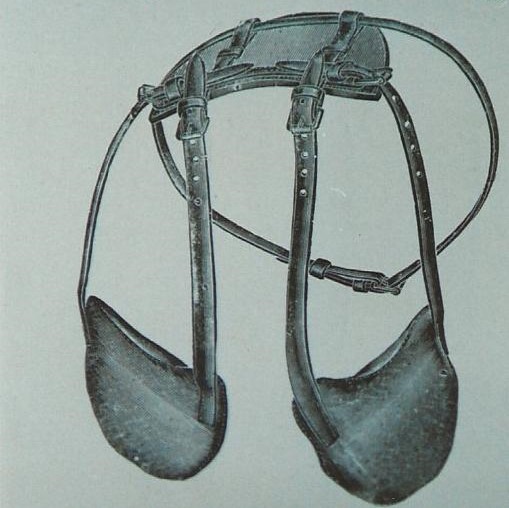 Finally, something every Bulldog would have required in the days when exaggeration ruled: Improved Bulldog Spreaders, “specially made for improving the front and shoulders of Bulldogs.” The spreaders were adjustable, made of best bridle leather and priced at £1 per complete set.

© Dog News. This article may not be reposted, reprinted, rewritten, excerpted or otherwise duplicated in any medium without the express written permission of the publisher.
Fri, 08/06/2021 - 6:42pm