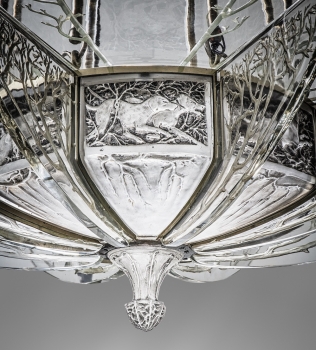 These exquisite items have a canine motif
By
Nick Waters

The name René Lalique immediately evokes images of style, elegance and design from the first half of the 20th Century. All these qualities come into play in a chandelier he created and was sold recently by auction house Lyon and Turnbull.

Until the beginning of the 20th Century, light largely depended on candles, gas, oil or fire. Only then did the use of electricity become more commonplace. It is not surprising that hanging lights appealed to a progressive designer like Lalique, so by 1902 he had begun designing them. Lights mattered to Lalique, and his creations are still much appreciated around the world today. He was a genius in the way he utilized various techniques, so in this chandelier we see him combining intaglio, molded, clear and frosted glass and staining to provide greater definition of details, all to create something of beauty. 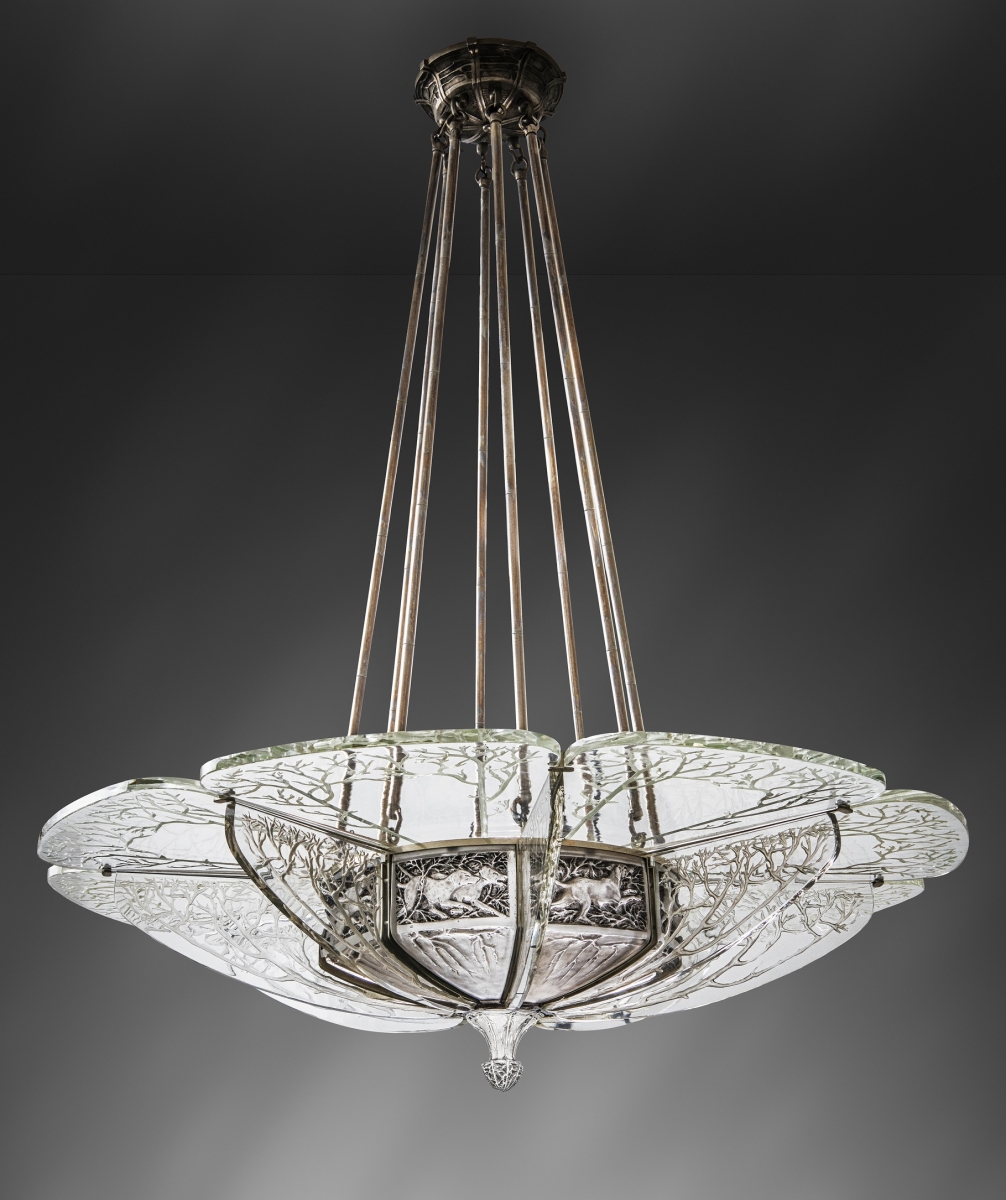 The subject of La Chasse (the hunt) is long established in both fine art and applied works of art, and Lalique returned to it on a number of occasions. It provided an opportunity for him to display his passion for nature, both flora and fauna. In the chandelier he positioned the trees in the plates, while the animals are focused around the central dish form, which creates a sense of the stags running through the forest pursued by the hounds.

Lyon and Turnbull had great hopes for its success and were not disappointed when it sold mid-estimate for £100,000.

In the words of the anthropologist Mary Douglas, “Dirt is simply matter out of place.” Personal hygiene has a checkered history. Some civilizations were obsessed with bathing, while for others it was anathema. In medieval Britain some considered it an act of sexual debauchery to take off one’s clothes to bath, others that letting water get all over the body would let the devil in.

Until the observations of Hungarian-born Ignaz Semmelweis in 1847 that the practice of hand washing reduced the risk of disease, and the introduction of carbolic acid as a surgical antiseptic in 1860s Glasgow, body and mouth odors were often a matter of cover up rather than get rid of. Hence the popularity of etuis and vinaigrettes to hold perfume and bonbonnieres to hold sweetmeats to sweeten the breath.

These little enamel containers, frequently each a miniature work of art, were created by craftspeople, mostly in small-scale workshops, working long hours in what today would often be considered appalling conditions and in some cases with dangerous substances. Many of the enamellers were French Protestants or of French extraction who had come to England to escape persecution by the French Catholic government. These Huguenot families were skilled in many areas of the arts.

Quoting from the Antiques Council: “There is nothing in all English decorative arts that has continued to charm and fascinate collectors as much as English enamels ….”

There were two areas of the country where these enamel boxes were made: Chelsea in London and in the towns and villages around Bilston in South Staffordshire. Hence they are frequently and collectively known as “Bilston enamels.” The main period for the production of these enamels was roughly 1760 to 1790. The identity of those who created the boxes is lost to the passage of time, as none was ever signed. Most were given as tokens of affection or esteem.

The shape of the bonbonnieres often lent themselves to be modelled as a dog; consequently, dogs were a popular subject. The bases were often decorated with sprigs of flowers; some have interior mirrors, and the better ones have gold-hinged mounts. The selection here are all with Gould Antiques (www.gouldantiques.com), which was exhibiting at the prestigious Olympia Fine Art Fair in London, and are dated to circa 1765 to 1770 and made in South Staffordshire.

The fawn Pug with cropped ears (the fashion of the time) and the Toy Spaniel are priced at £950 and £1,100, respectively. Both these breeds were popular at the time. The Mastiff was an unusual choice of breed, and, like the Pug, the ears are fashionably cropped. The price reflects the breed’s rarity on objects like bonbonnieres, with the head at £1,390 and the recumbent dog at £2,600. In the 18th Century the Mastiff was frequently portrayed just as a large, well-built dog, but both the bonbonnieres are modelled as dogs recognizable as the breed we know today.

Hare coursing was often thought of as predominantly the prerogative of men, but the sport was popular with both men and women. The recumbent dog holding a hare in its mouth is a very large and exceedingly rare form for a bonbonniere. The white-ground lid has an overpainted transfer print of two hounds coursing a hare. It is priced at £3,600.

The name Cartier is to jewellery what the name Lalique is to 20th-Century design. Regarded as one of the most prestigious jewellery manufacturers in the world, Cartier was founded by Louis-François Cartier in Paris in 1847 and remained under family control until 1964. It has a long history of sales to royalty; the British, Spanish, Portuguese, Russians and House of Orléans all issued royal warrants to Cartier.

As popular now as it was then is a range created by Cartier in the 1960s of jewels across the animal kingdom that were made specifically for daytime wearing and to raise a smile with the use of cartoon-like forms and whimsical designs.

Charterhouse Auctioneers recently sold one of these brooches designed as a watchful-looking Yorkshire Terrier in 18ct gold with a bow set with diamonds on top of its head. It found a new home at £3,000.

Also sold by Charterhouse was a 19th-Century ivory brooch finely carved as a Toy Spaniel and Italian Greyhound on a naturalistic base beneath foliage. Both breeds were popular at this time with carvers of such brooches. It sold for a very affordable £30.

© Dog News. This article may not be reposted, reprinted, rewritten, excerpted or otherwise duplicated in any medium without the express written permission of the publisher.
Sat, 12/11/2021 - 10:26pm