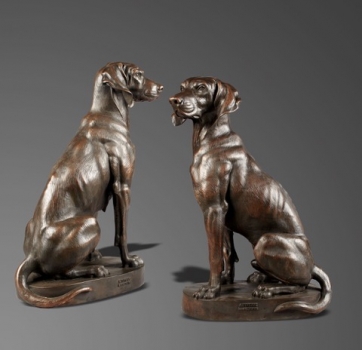 Artists have depicted dogs in a great variety of materials. This selection showcases the versatility of metal.
By
Nick Waters 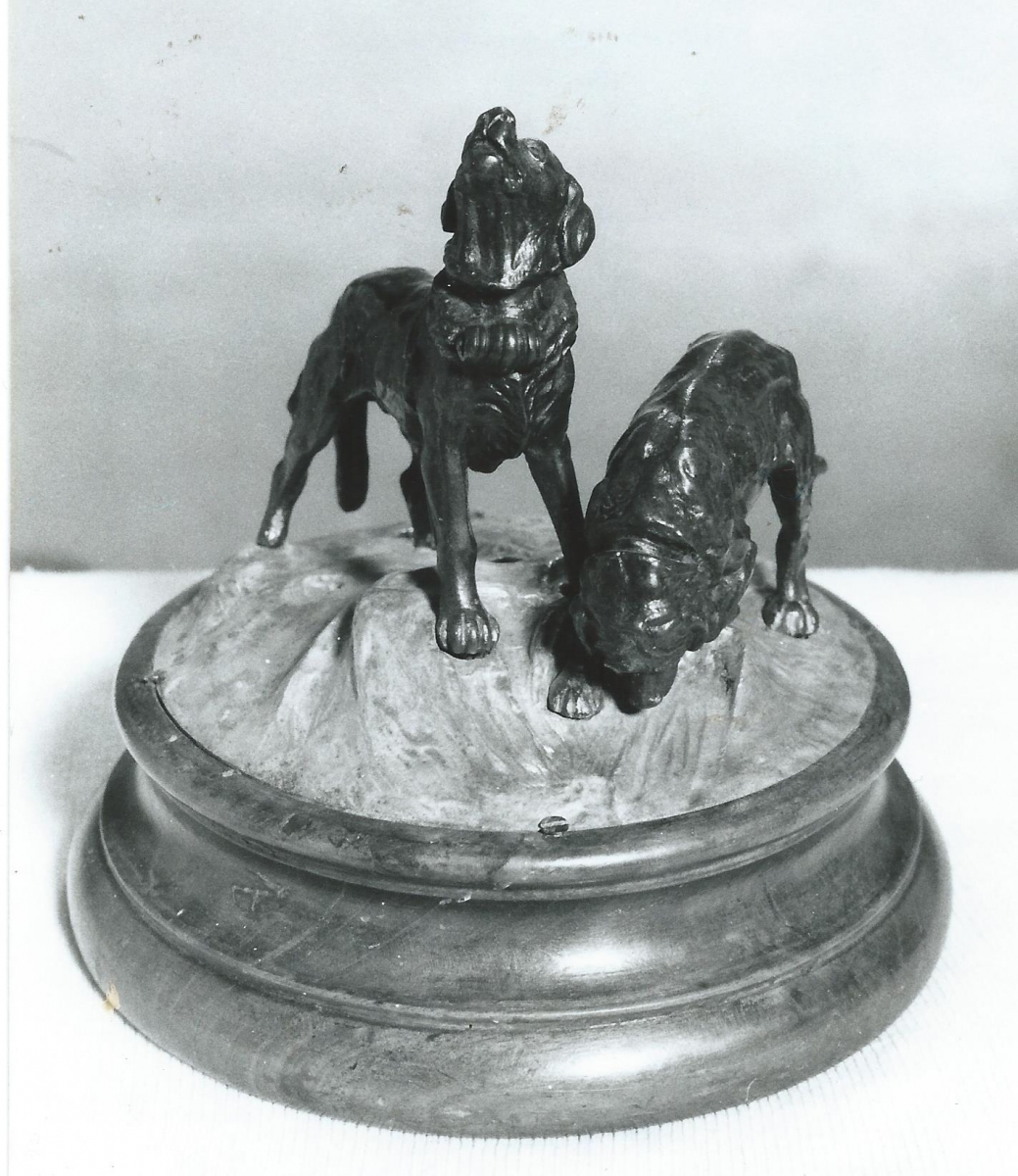 Basil Bradley (1842-1904) is listed as a landscape and genre painter and watercolorist, and his works were exhibited in many galleries, including the Royal Academy. He was noted for his studies of dogs of which his Setters – set in Highland landscapes to appease the Victorian taste for anything Scottish – are perhaps the best known.

One of his paintings depicted two St. Bernards and a traveller buried in the snow, one dog trying to revive the traveller and the other baying for help from the monastery, which can be seen in the distance. Around the time he painted this picture he also sculpted a group of two dogs in snow, one digging for a lost traveller, the other calling for help.

Reproduced in silver, it formed the covers for two tankards instrumented and awarded by the St. Bernard Club. They were first awarded in 1882, when the club organized its first show. Bradley was not known as a sculptor, and reproductions of his original models in bronze are rare. The group here, showing the dogs in bronze and the snow in silver, the whole mounted on a walnut base, is perhaps the only such piece known to exist.

William Calder Marshall (1813-1894) did not specialize in realistically observed animals from nature, but rather figures from mythology, which leads one to believe that his bronze of the Deerhound was perhaps a very special commission. The subject of the model, one of the last pieces he completed, is Champion Swift, born in 1889 and winner of seven Championship prizes, including two at Crufts. 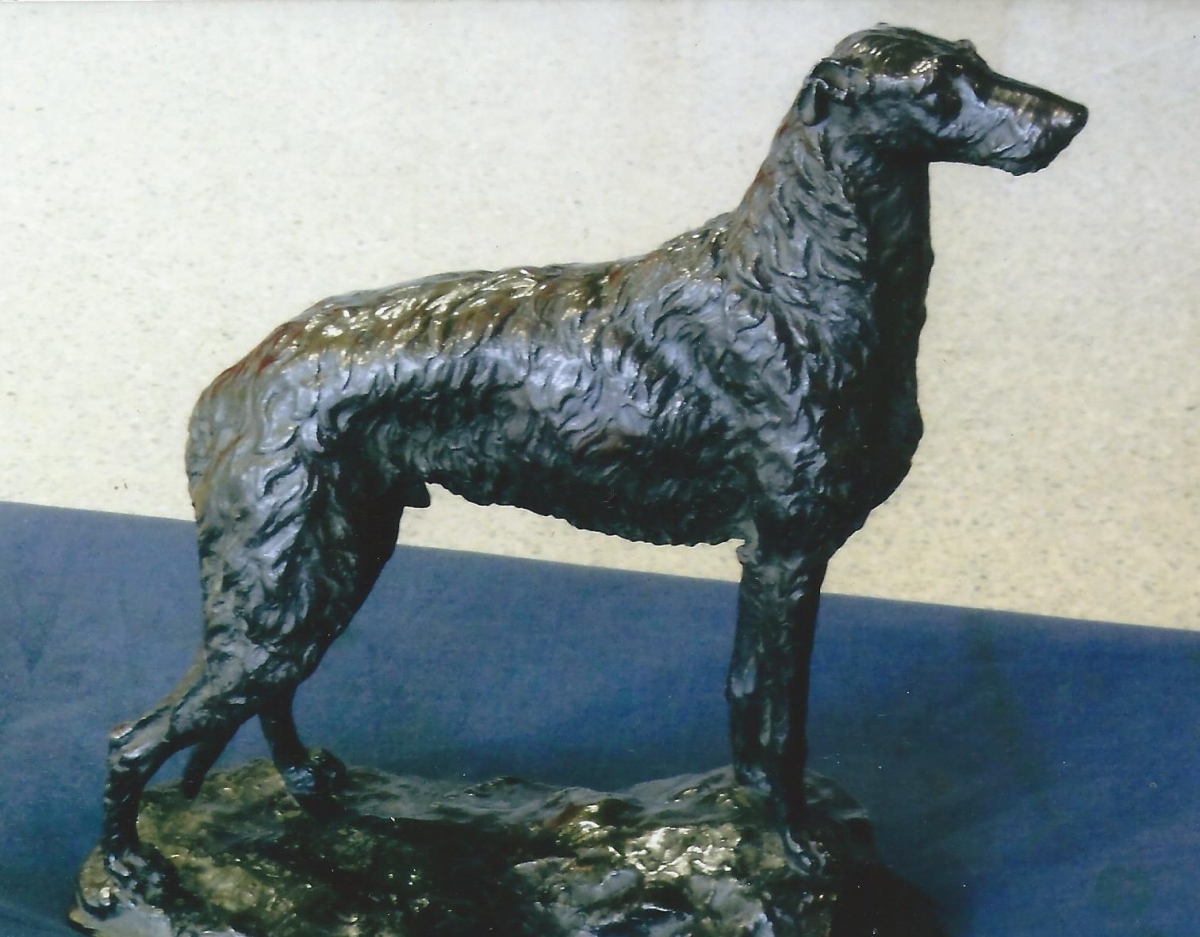 Writing in “The Kennel Encyclopaedia” (1908), Harry Rawson noted: “One of the most famous sires was Ch. Swift, a magnificent hound, and one of the pillars of the breed. Many of the best specimens of to-day claim this hound as one of their fore-fathers.”

John Skeaping R.A. (1901-1980) was one of a circle of artists that included Barbara Hepworth, Ben Nicholson and Henry Moore. He was once married to Morwenna Skeaping of the Leighbridge Standard Poodles, whose successes included Ch. Leighbridge Catmint, reserve in the group at Crufts in 1978.

Skeaping was a sculptor and painter primarily of equine studies who moved to the Camargue to be near the wild horses. He was also fascinated by the athleticism and graceful lines of running dogs. His model of two fully stretched Greyhounds was cast in an edition of 20 by Wally Livingstone of Kent in 1978.

When it comes to large, decorative groups, they don’t come much more impressive than the art-deco figural bronze titled “The Release” by Hungarian artist Alexandre Kelety (1874-1940). It shows a muscular athlete dressed only in a loincloth struggling to hold back four large cropped-eared dogs that are straining on the leash. It was featured in Hutchinson Scott’s September sale estimated at £8,000-10,000. 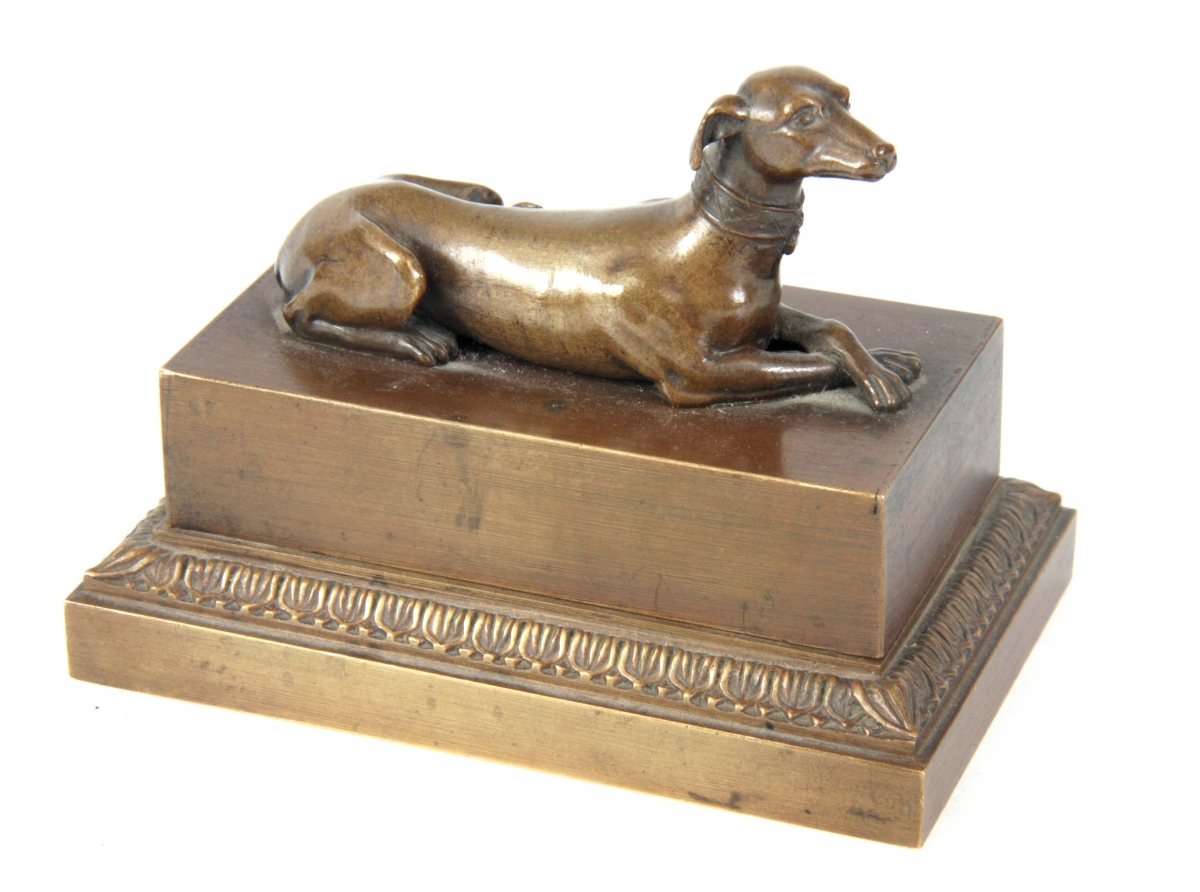 Also in Hutchinson Scott’s sale with expectations of £400-600 was a late-19th-Century bronze inkwell showing a recumbent cast Greyhound lifting to reveal a fitted glass liner, blotter and pen holders mounted on a gadrooned plinth base.

In the art and antiques world, Ken Bolan has led an interesting and at times colorful life, the sort many of us envy. The latest chapter is Ken Bolan Studio in the heart of the beautiful West Country. From there he shares his inimitable style, mixing modern and decorative pieces with rare antiques, Continental furniture, sculptures and paintings to create an atmosphere that combines luxury with a homely feel. The next three pieces are from his studio.

Pointers and Setters epitomized sport with gundogs in the 19th Century. The French animaliers offered countless pairs or groups in bronze, and Coalbrookdale offered pairs or groups in cast iron. The extremely rare and highly detailed 19th-Century cast-iron pair here, the Setter looking to the right, the Pointer to the left, both recumbent on rectangular bases, were cast in Paris circa 1870. 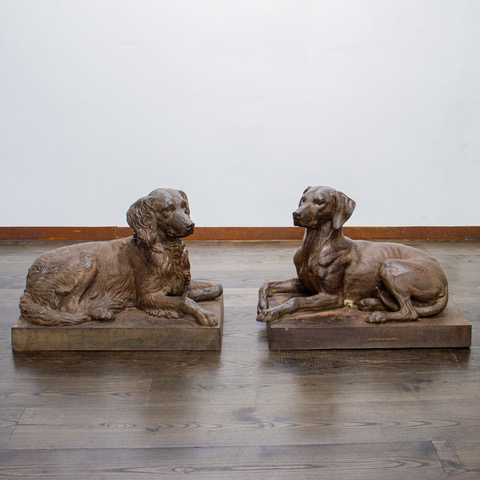 They were the creation of Jean-Jacques Ducel (1801-1877), Marseilles-born sculptor and iron master who co-founded the foundry J.J. Ducel Master of Forges, Paris. He purchased the Pocé-sur-Cisse estate iron foundry in 1829, and it became one of the largest art foundries in France until Ducel’s death. 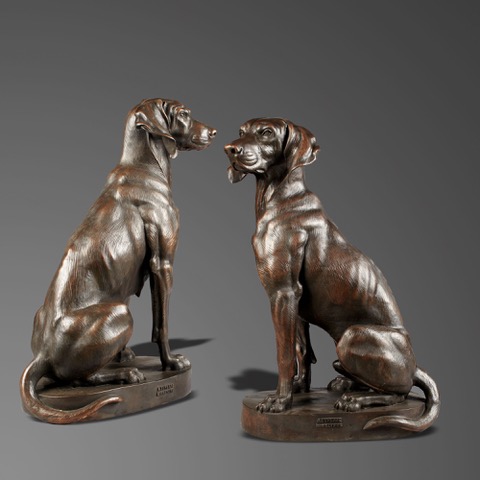 The pair of hounds, one male, the other female, sitting on oval bases were cast in bronze by K.B. Studio from an original pair of cast-iron models by Henri-Alfred Marie Jacquemart (often known as Alfred Jacquemart, 1824-1896). The original iron models were cast in the last quarter of the 19th Century by Antoine Durenne, Sommevoire Foundry. Jacquemart was a leading contributor to the animalier school of the 19th Century. His animal works were exhibited at the Salon 1847-1879.

The galloping Borzoi was sculpted by American sculptor and painter Audrey Fournier Mulligan (1941-2010), whose talent shows clearly that she was the “master” at understanding anatomy and motion. She was a breeder of Pugs and Borzoi (the latter being her favorite breed), published author on veterinary surgery and judge. 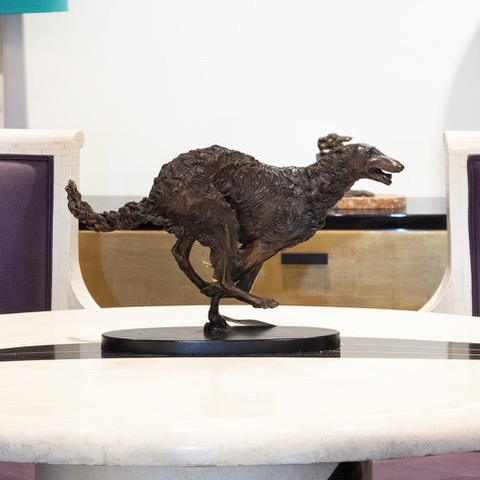 Her commitment to the working qualities of the breed was evident by the fact that some 20 dogs had field awards. Princess Zorya was the first Borzoi to earn the Canadian Field Champion Excellent title and the first Borzoi to win Best in Field at the 1978 Grand National Lure Course in Denver, Colorado.

The Ken Bolan collection can be viewed at www.kenbolanstudio.com. 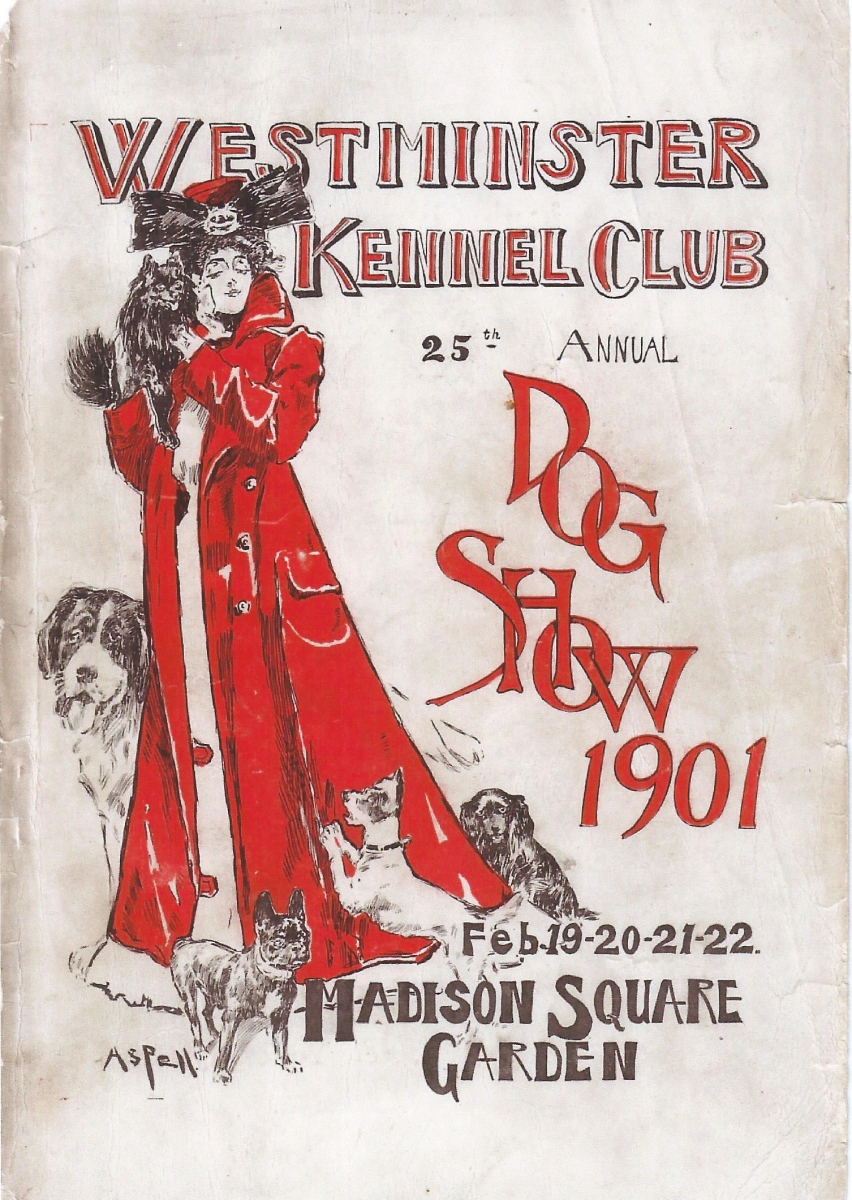 Finally, something completely different. February traditionally sees the good and the great in dogdom gather in Madison Square Garden for one of the world’s greatest dog shows, the Westminster Kennel Club. This year it is not to be.

As a “taster” for what could have been, the front cover of the catalog from the February 1901 show at the Garden. It was designed, as were others around that time, by New York-based illustrator S.B. Aspell. Among the other publications Aspell did illustrative work for were “The Penny Illustrated Paper” and “The Household Magazine.”

© Dog News. This article may not be reposted, reprinted, rewritten, excerpted or otherwise duplicated in any medium without the express written permission of the publisher.
Sat, 02/06/2021 - 3:18pm