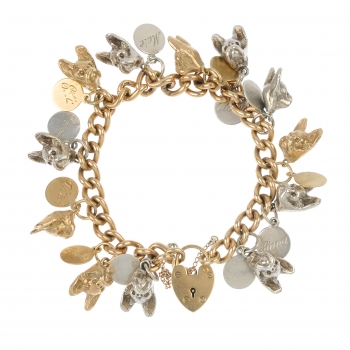 They Wear It Well

To paraphrase the title of one of Rod Steward’s international hits from 1972, “They Wear It Well” is an eclectic selection of jewelery and dog collars
By
Nick Waters

The gold charm bracelet (above) was put together by Joan Cottrell, whose Quatt French Bulldog kennel, which she founded in 1946, became one of the most successful in the breed. Quatt was the first kennel in Britain to breed champion French Bulldogs in all three colors. In total the kennel produced 31 British champions and many overseas.

Joan Cottrell had a gold link bracelet and to celebrate a Quatt champion being made up had a French Bulldog head and name tag engraved with the dog’s pet name. Twelve of her 31 British champions are honored, gold for fawn and brindle, silver for pied. The heads were made by Arthur Payton-Smith, a master jeweller working in Birmingham’s famous Jewellery Quarter, himself a French Bulldog enthusiast.

The bracelet was sold by Fellows in a sale of vintage jewellery and accessories in 2014, bought by a London dealer for £1,000, way above expectations, and eventually found its way to a French Bulldog owner in America.

Another bracelet with connections to Birmingham’s Jewellery Quarter is the row of 10 enamelled heads on copper of Toy Manchester Terriers (English Toy Terriers in the UK) circa 1870. It has a provenance to Stanley McKie, Birmingham jeweller and breeder of ETTs, whose Colvend kennel produced 12 champions. Among them were Ch. Colvend Hero, BOB Crufts in 1957, and Ch. Dean Swift of Colvend, Crufts BOB winner in 1958.

The bracelet was also once owned by Frank Palmer (Stealaway), whose kennel was most successful during the 1960s and ’70s. His Ch. Stealaway Golden Girl won the Toy Group at Crufts in 1970, the first and only ETT so honored.

The bracelet was sold in the Crufts Charity Auction in 2006 for £1,550, and was destined for a new home in Canada.

Sir Edwin Landseer’s “A Distinguished Member of the Humane Society” was exhibited at the Royal Academy in 1838. Describing the painting in 1874, F.G. Stephens wrote: “ … the large white Newfoundland dog, with a black head and white muzzle, reclining on the last stone of a sea-side quay, while the summer ripples slowly rise and fall at the sea-wall, where a big mooring ring just catches the lapsing wavelet as it runs along the stone.” 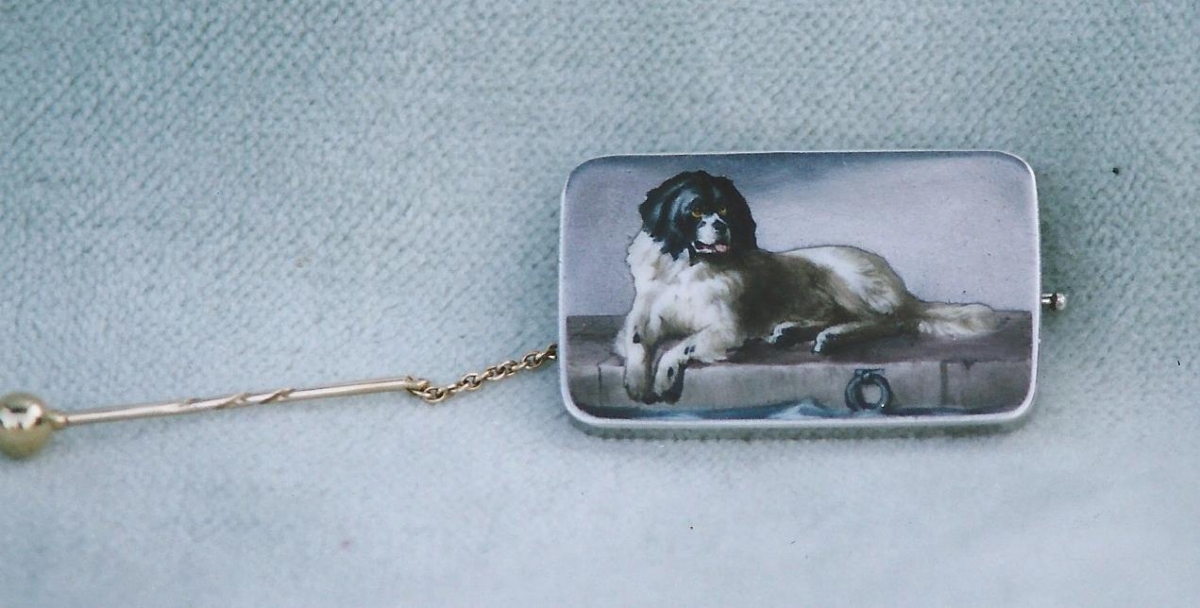 The dog was owned by the Newman Smith family and was named Paul Pry. On the death of Mrs. Newman Smith, the picture passed into the possession of the National Gallery and then to the Tate, where it languished for countless years. Thanks to the efforts of the late Ron Pemberton in America and Di Sellers in the UK, the picture was restored and is now on loan to the Kennel Club. It is arguably one of the best known of all dog pictures, and the most copied. The Victorian silver and enamel brooch is a particularly fine copy, very true to the original painting. 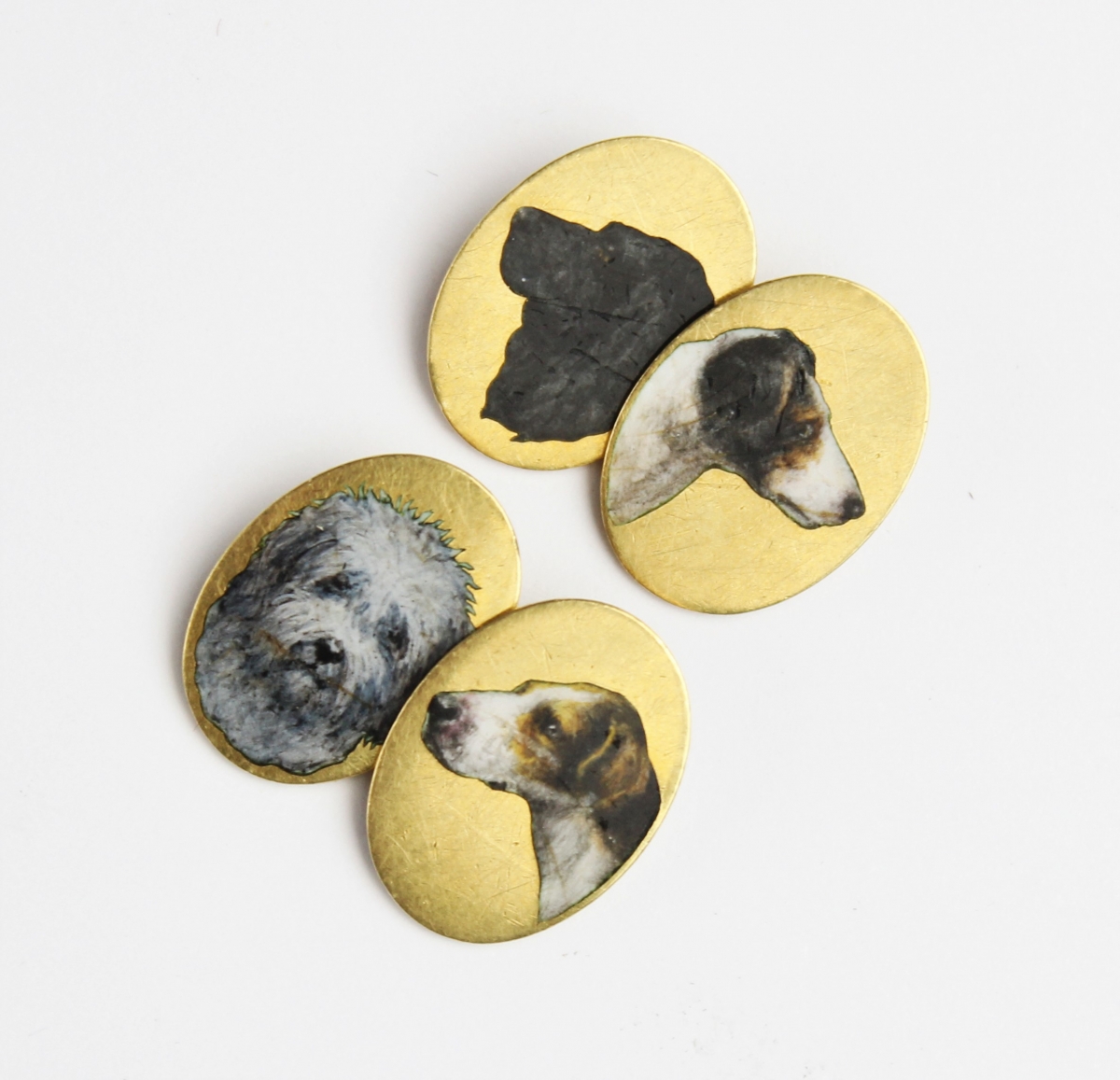 The last piece of jewellery is a pair of 18-carat gold and enamel cufflinks hallmarked for London 1928 and sold by Trevanion and Dean for double the top estimate at £600. The enamelling is of the finest quality and one suspects by the choice of breeds a private commission. 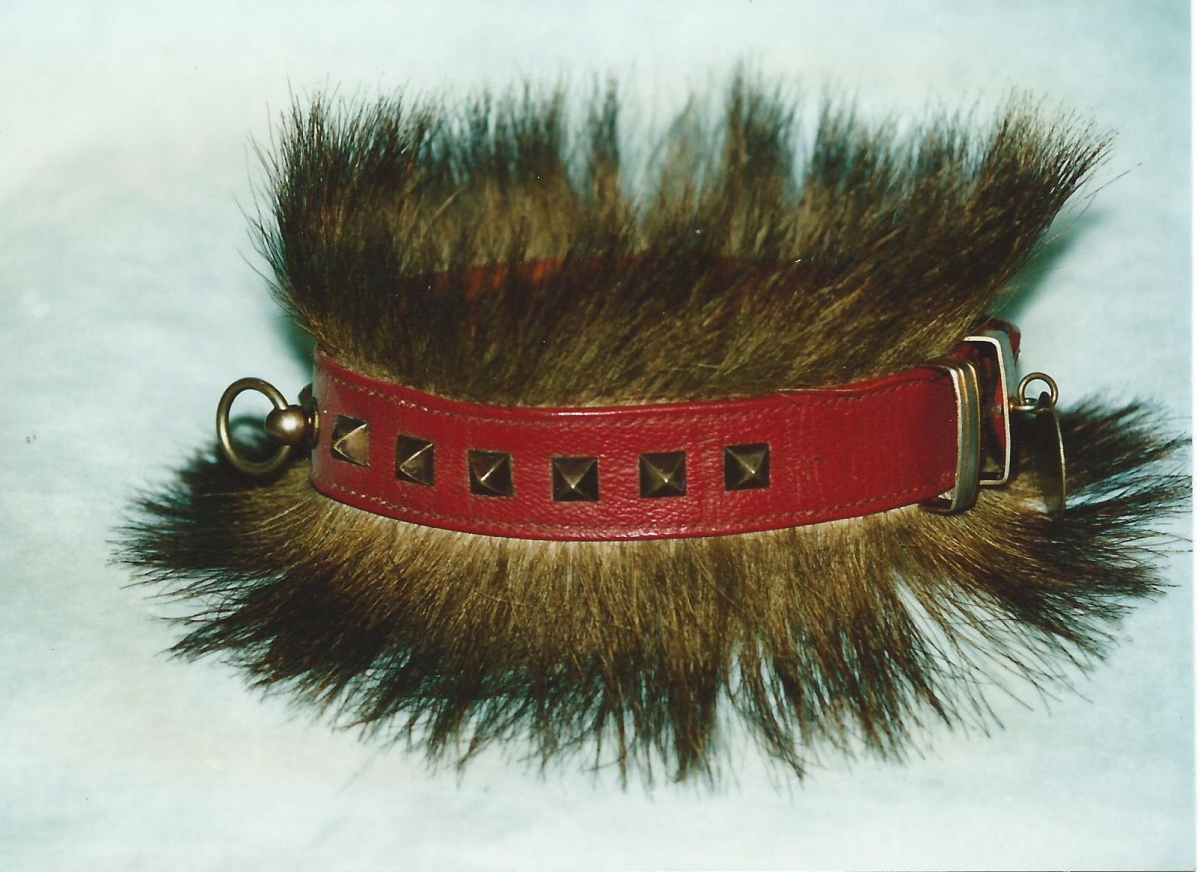 My first collar is one specifically designed for French Bulldogs. The red leather collar lined with brown leather and decorated with brass studs and badger-hair fringes was made circa 1910. The tips of badger hair are very irritant, and its use at the time on collars served two purposes: decorative and to encourage dogs with “soft ears” to carry them erect. 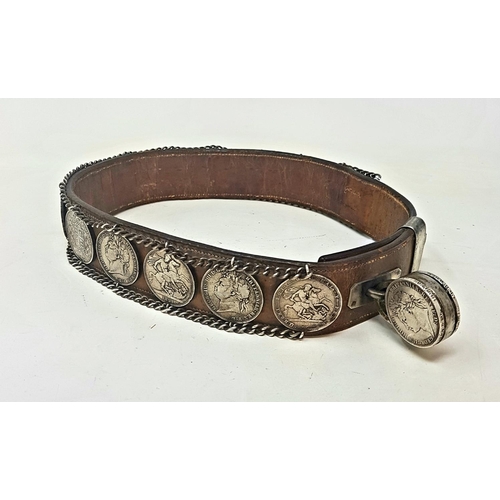 This collar was handmade in Paris for a dog named “Brock” owned by Lady Steele. The Lady Steele is thought to be Marie, wife of Major General Benfield Steele and great-granddaughter of Marquis de Lotbinière, the only Canadian marquis born into a wealthy French family in colonial Canada.

The large brown leather collar, mounted with George IV crown coins dating from 1821, is engraved “Goth Miss W.A. Coode, Polapit Tamar.” The Coode family owned land round about the Tamar Valley. Designated An Area of Outstanding Natural Beauty, the valley straddles the border between the counties of Devon and Cornwall. The collar was offered for sale by Charterhouse Auctions with an estimate of £1,000-1,500. 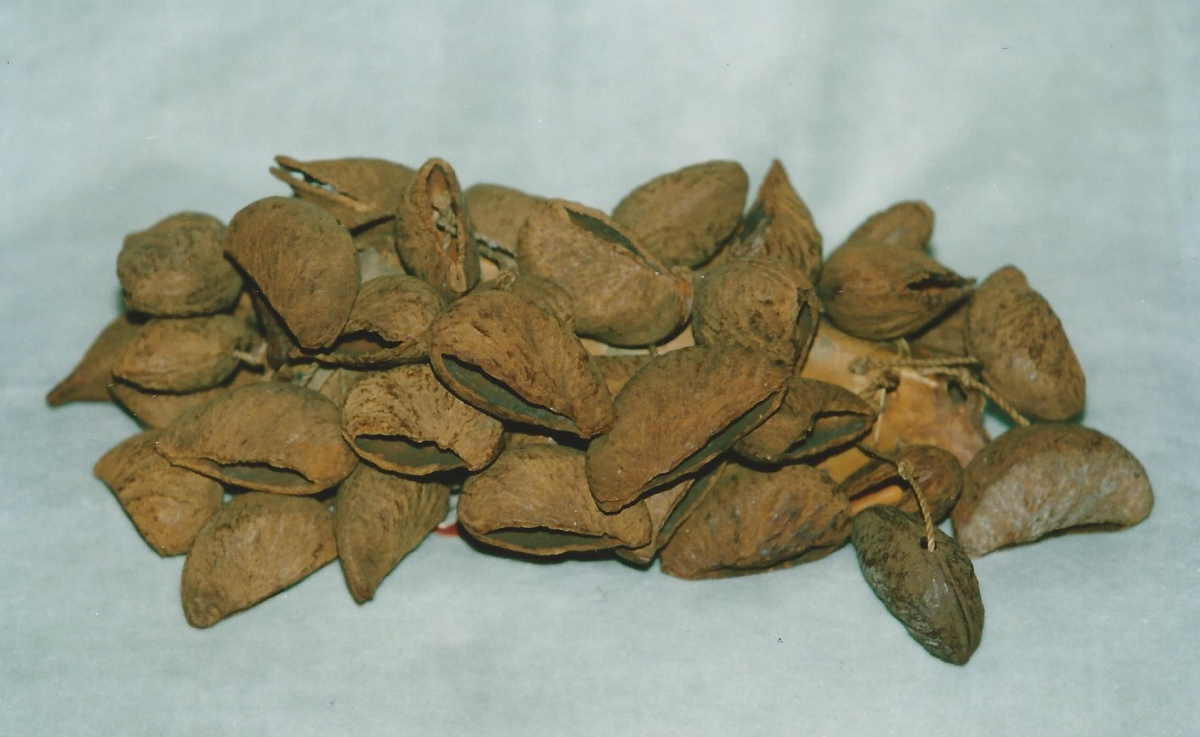 If it could talk, the simple leather collar with a multitude of nut shells attached would probably have a great story to tell about life in the African bush and how it found its way to England. Originally worn by a hunting dog in the Congo, the purpose of the shells was to rattle together to make a noise so the huntsman could follow the dog and spear any game.

Garryowen would be a name familiar to every Irish Setter devotee and historian. He was born in 1876, bred by H.S. Moore of Dublin and owned by James J. Giltrap, a law agent. On February 22, 1890, the Chicago Tribune wrote about his show career: “… the hero of every bench show in Europe until his death two years ago.” His catalog of wins included the Grand Prix de Honeur of the Belgium Kennel Club as the best of 978 sporting dogs of all breeds at Antwerp in 1884. 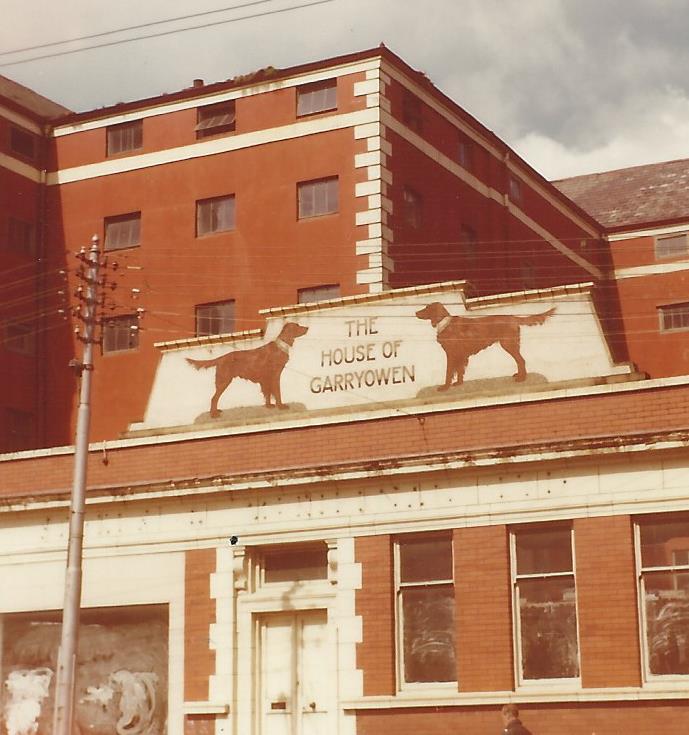 Giltrap was James Joyce’s great-uncle, and in his “Ulysses” Joyce mentions the dog in three of the episodes – “Cyclops,” “Nausicaa” and “Circe.” His portrait was commissioned from William Osborne RHA and is in the collection of the National Gallery of Ireland.

The Irish tobacco company Spillane named their plug tobacco after the dog, and there once stood a commercial building in Limerick named “The House of Garryowen” with images of the dog in tile mosaic. When the building was due for demolition, a group of people petitioned for at least the façade to be saved, as it was a local landmark. But it was not to be and the whole building was destroyed. 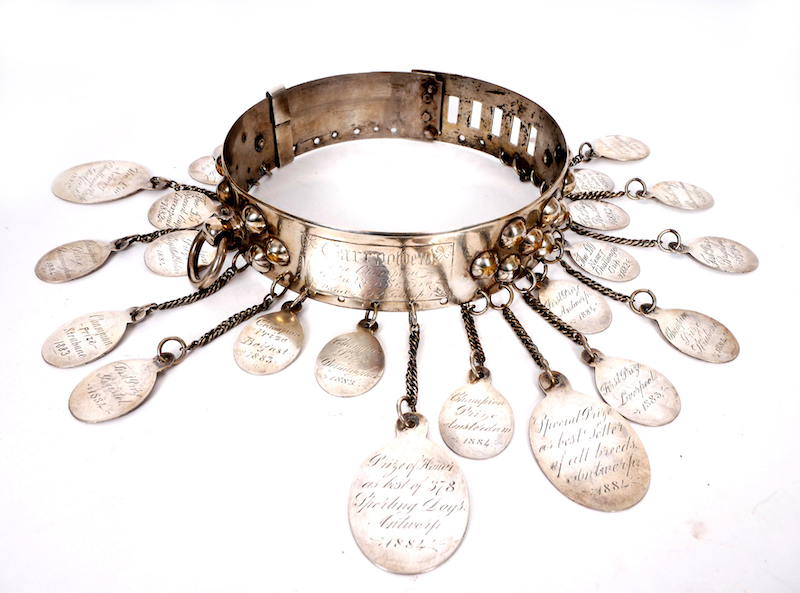 The simple white metal collar engraved: “Garryowen – The Champion – Irish Red Setter – J.J. Giltrap,” suspended with 23 white metal discs, each engraved with one of Garryowen’s show honors, was sold by Whytes in Ireland for Euros 6,600 against an estimate of Euros 800-1,200.

© Dog News. This article may not be reposted, reprinted, rewritten, excerpted or otherwise duplicated in any medium without the express written permission of the publisher.
Thu, 02/18/2021 - 6:12am