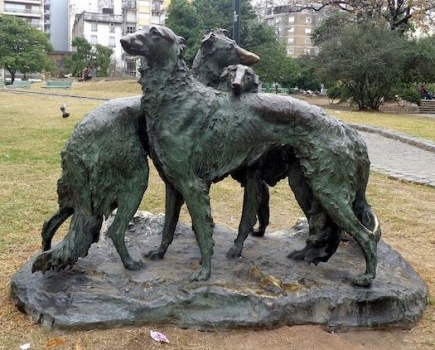 Like many big cities, London is awash with statues, many in prominent places and others tucked away, and a surprising number feature dogs.

Visitors arriving at St. Pancras station from France will see one of the capital’s newest monuments, “The Meeting Place.” Sculpted by Paul Day, it stands some 30 feet high beneath the clock and is modelled as an embrace between Paul and his French wife Catherine. It stands as a metaphor for St. Pancras’ role as a terminus of the rail link between England and the Continent.

At the base of “The Meeting Place” is a high-relief bronze frieze featuring images from the history of the underground and trains: people queuing on platforms, soldiers departing for war, travellers drinking in a bar. Among these is a bag lady descending the stairs for the night with her faithful dog. Over the years the dog’s head has been polished by countless hands stroking it as they passed by for destinations unknown. 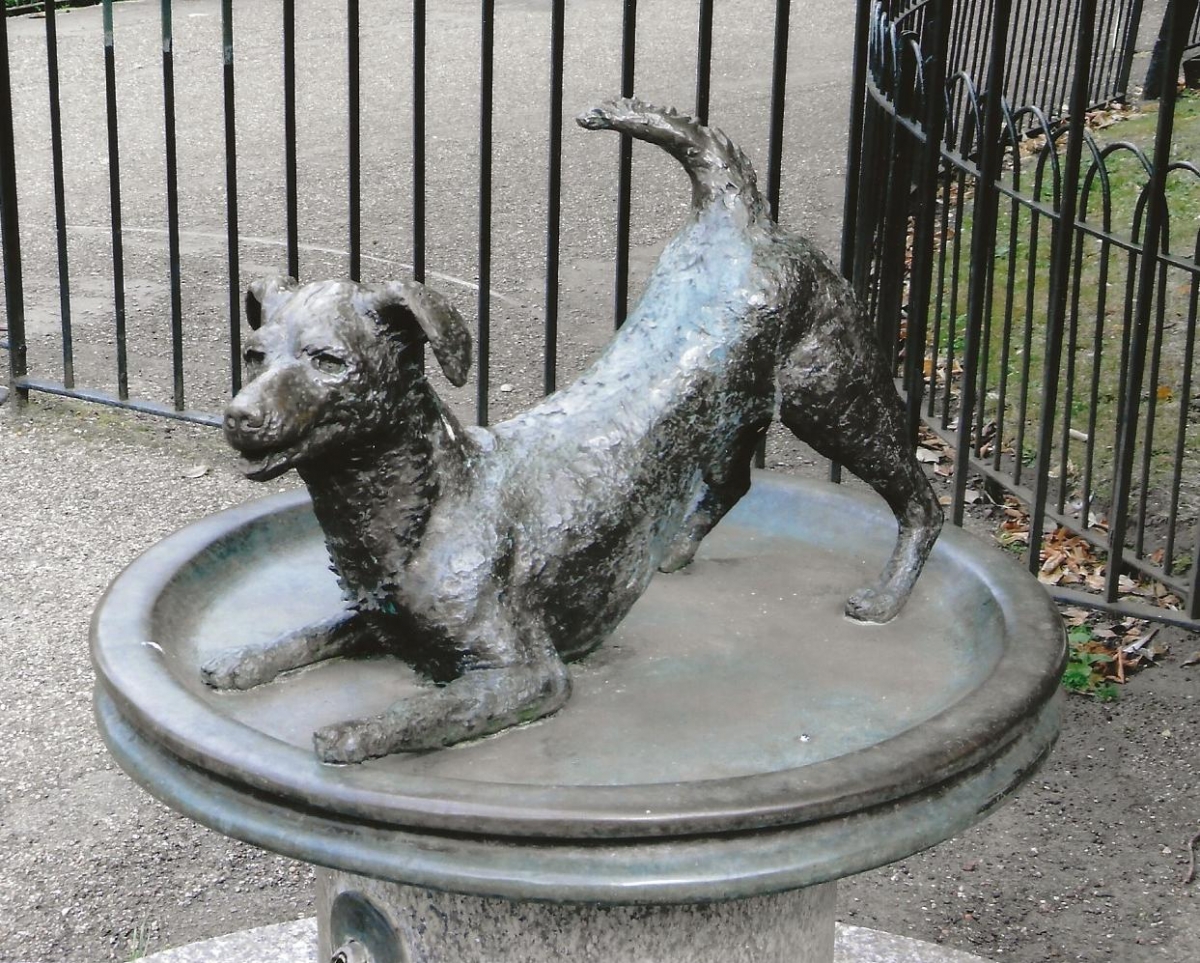 Public statues come in all sizes, and just inside the Palace Gate entrance to London’s Kensington Gardens is one of London’s smallest, a drinking fountain designed for dogs, although more frequently used by pigeons. On top is a playful bronze puppy sculpted by Silvia Gilley and is a memorial to the now almost forgotten actor, manager and producer Esmé Gilley. 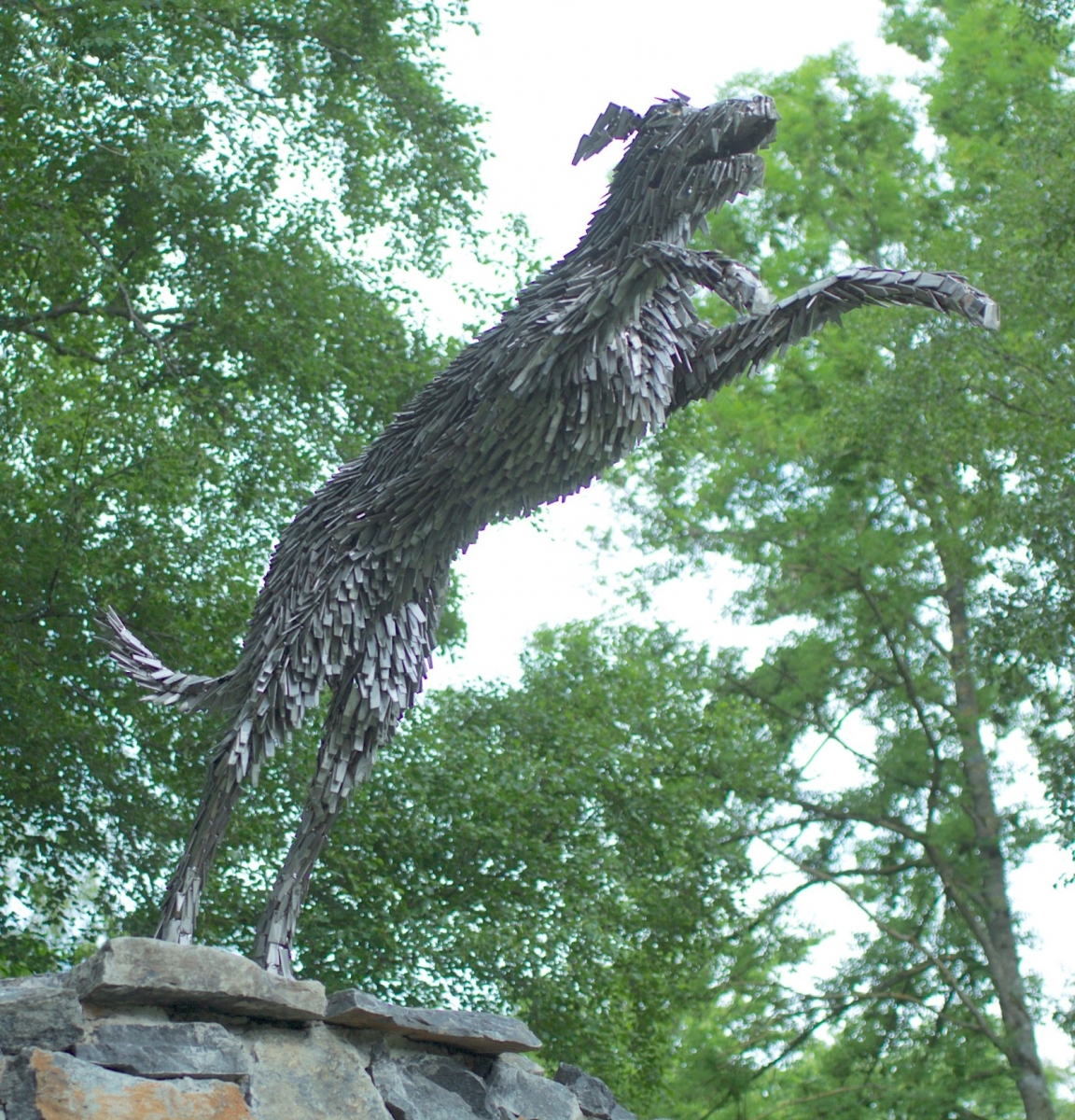 “The Leap of the Dog” is by Northern Irish sculptor Maurice Harron and is situated in Roe Valley Country Park, Limavady, a town in Northern Ireland. It derives its name from the Irish “Leim an Mhadaidh,” meaning Leap of the Dog, based on the story of a legendary leap over the River Roe that saved the O’Cahan castle from enemy ambush.

The original site of the O’Cahan’s castle was in what is now the Roe Valley Country Park, and from here the O’Cahan clan ruled over Limavady. On one occasion, when under siege by their enemies – the O’Donnell clan from County Donegal – the O’Cahans sent for reinforcements across the River Roe via a faithful Irish Wolfhound, who leapt across the swirling currents of the river to deliver the message. The O’Cahans’ stronghold was secured, and their influence continued to thrive until the 17th Century, when the last O’Cahan chief was imprisoned for treason in the Tower of London 1628.

In 2013, in the presence of two Irish Wolfhounds, “The Leap of the Dog” sculpture was unveiled to commemorate the famous legend. 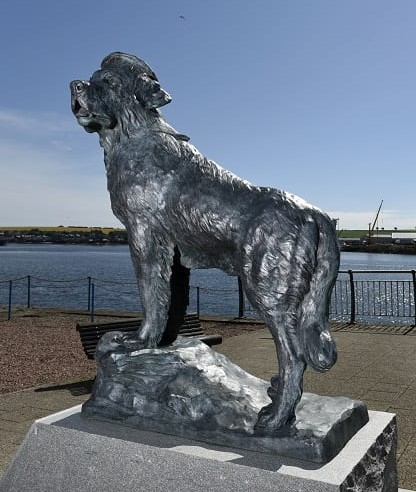 The St. Bernard “Bamse” – meaning bear or teddy bear – was a national hero in Norway. He belonged to Erling Hafto, commander of the Norwegian minesweeper Thorodd, and his reputation grew from his habits in battle in World War II while out at sea on his master’s ship. He would stand firm at the foremost gun tower of the boat until hostilities ended. When he died in 1944 on board the Thorodd, which was based in Montrose in Scotland at the time, the local schools were closed in tribute. He was buried with his head facing his homeland of Norway. He was posthumously awarded the Dickin Medal, the animals’ Victoria Cross and the Norges Hundeorden, Norway’s special award for dogs.

The large bronze memorial to Bamse by Alan Beattie Herriot stands proudly at the harbor’s edge in Montrose and was unveiled by HRH Prince Andrew. 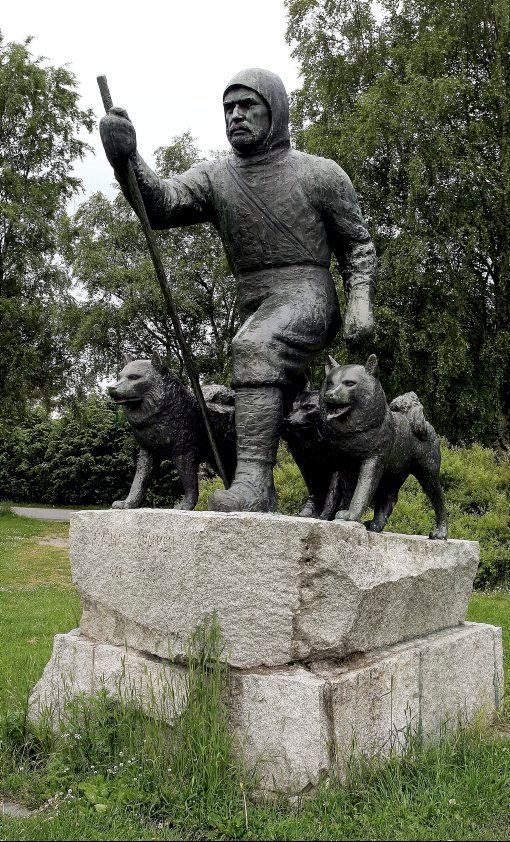 Fredrik Hjalmar Johansen was a polar explorer who took part in expeditions to both the North and South Poles. He was also an excellent skier and gymnast, becoming world champion in gymnastics in Paris in 1889. He took his own life in 1913.

In his home town of Skein in Norway is a statue by the Norwegian sculptor Wilhelm Rasmussen erected in 1958. It shows Johansen on one of his expeditions accompanied by three Greenland Dogs.

Broadly speaking, Australia has two “types” of wild dogs: Dingoes and feral dogs. The feral dog is a hybridized, cross-bred mongrel, the scourge of the farmland and bush, and a pest enemy for land managers in farm and national-park regions. The damage they do to stock has always meant they never conform to the dog-human relationship.

Former park ranger Amanda Stuart spent 14 months researching the wild dogs, talking to farmers, dog trappers, land-management officials and Aborigines before creating her pack of feral dogs, which was unveiled in 2011. It shows the pack weaving their way through the trees and benches of Australia’s capital city, Canberra, heading purposefully to their homeland in the Brindabella Mountain Range. The sculptor’s aim was to bring a sense of the danger of the bush to the “bush capital.”

Staying “down under,” this time in the small rural community of Hunterville on the North Island of New Zealand: The area is a great cattle and sheep farming area with an estimated 40 million sheep, so a special breed of dog was needed to work them. The Huntaway was developed nearly 100 years ago with various sheepdog breeds, the Labrador and German Shepherd being a few of the breeds allegedly included in its generic formation. 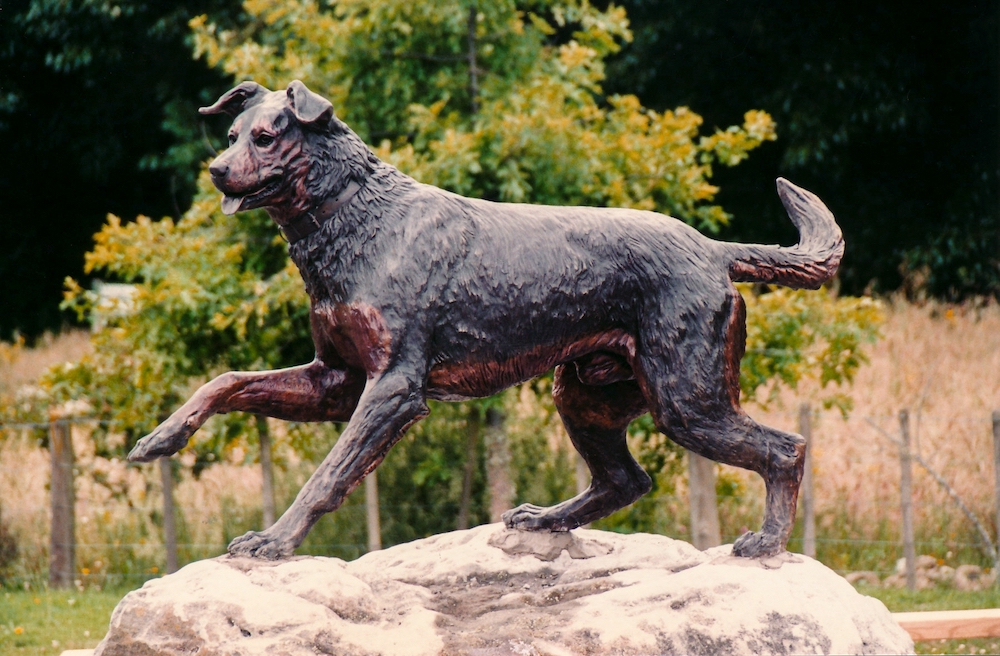 Its peculiar and much prized characteristic is its loud bark, which it uses when working to enable the shepherds to know where the flock and dogs are from some considerable distance. Situated on State Highway 1 is a bronze statue of a Huntaway sculpted by local artist and farmer Jackie Williamson and modelled on a dog named “Mac” owned by local farmer Brian Hunter. 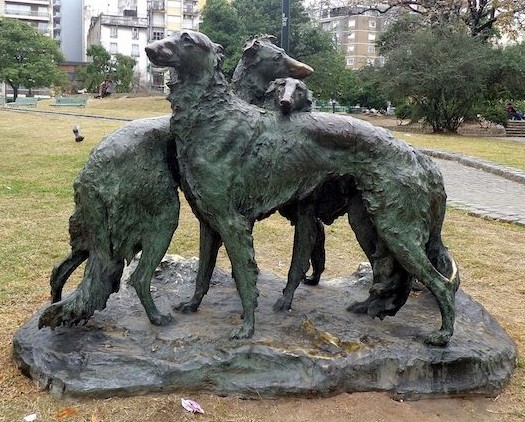 One of my favorite pieces of public sculpture was created in 1914 by the Italian sculptor, medallist and illustrator Giacomo Merculiano. In this one piece Merculiano has captured all the expressions one expects to see in a sighthound. The Borzoi was a breed he returned to many times. There are at least two castings of this group, one in Buenos Aires, Argentina, and one in Belgium.

Gustave Beernaerts was the most influential breeder of Borzois in the first quarter of the 20th Century on the Continent and there is a photograph of his wife and daughter and six “du Zwaenhock” Borzoi in front of the statue in Belgium. Could the hounds in the group be modelled on Beernaerts’ hounds?

© Dog News. This article may not be reposted, reprinted, rewritten, excerpted or otherwise duplicated in any medium without the express written permission of the publisher.
Sat, 12/18/2021 - 12:49pm