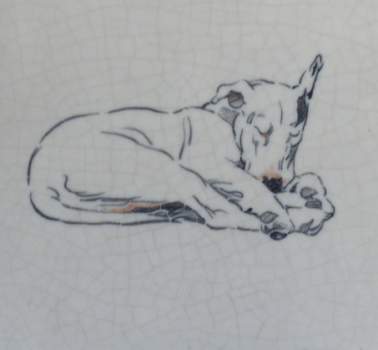 Tracing the fascinating history of this encaustic earthenware
By
Nick Waters

In 1709 Abraham Darby, a member of an important Quaker family, first developed a blast furnace for smelting iron ore with coke. That single action triggered the start of a new revolution – the Industrial Revolution. Darby could never have visualized just what he had achieved would lead to the mechanized world we all know today.

As a result of his discovery, a cast-iron bridge was constructed across the nearby River Severn, which opened in 1781. It was the first major bridge in the world to be made of cast iron. Today the bridge is celebrated as a symbol of the Industrial Revolution. Its success inspired the widespread use of cast iron as a structural material. The world’s first cast-iron-framed structure was built in 1797 further along the river in nearby Shrewsbury for use as a flax mill. Described as “the grandfather of skyscrapers,” it was the precursor of the New York skyscrapers and others that followed.

A major river flowing through the gorge meant that materials could be shipped to the area with comparative ease, and goods shipped out resulted in other industries opening in the area. In 1775 at Caughley, a porcelain factory opened, and for a brief period toward the end of the century made some of the finest soft-paste porcelain in England.

The arrival of a canal that joined the river meant that materials and goods could be transported even more easily. In 1795 in the village of Coalport, which was near where the canal and river joined, a factory opened for the production of porcelain. Coalport porcelain became some of the finest porcelain made in England.

Known as “the Ironbridge Gorge,” the whole area alongside the River Severn around Coalbrookdale where Darby first smelted his iron is a UNESCO World Heritage Site, along with the Taj Mahal in India and the Egyptian pyramids.

With their artistic talents and entrepreneurial skills, brothers George and Arthur Maw opened their factory in 1850 in Worcester for the manufacture of earthenware encaustic tiles. The word encaustic comes from the Greek word meaning “to burn in.” Different colors of clay were used to create the tile, so the design was within the body of the tile itself.

In 1862 they moved their factory some distance up the River Severn where the clay was a better quality to Broseley in the Ironbridge Gorge, moving again in 1883 to the Benthall Works in Jackfield alongside the river.

They timed their business well, for encaustic tiles became the height of fashion, and the company prospered. The new, purpose-built factory was the largest tileworks in the world, and the company was the world’s largest producer of ceramic tiles, making more than 20 million pieces a year. The range of tiles was expanded over the years and included not only the encaustic tiles, but relief tiles, mosaic tiles, transfer-printed tiles and hand-painted tiles. They took advantage of changes in fashion, and designs included Art Nouveau and Art Deco.

Tiles were transported around the world to decorate some of the world’s most prestigious buildings. In printed catalogs, the “Lists of persons and establishments supplied” ran to five pages and included the British Royal Family, Alexander II of Russia, maharajas, dukes, earls, railway companies, cathedrals, hospitals, public buildings, schools and colleges, and even warships. By the end of the Victorian era there was hardly a suburban house without a tiled porch or hearth, a butcher shop without tiled counters and walls, or a hospital without tiled wards. It was a marriage of beauty and decoration with hygiene.

The recession at the end of the First World War, and building restriction and the closure of railways in the decades following World War II, were very detrimental for tile production in Jackfield, and eventually the factory closed in 1970.

The site is now home to the Jackfield Tile Museum, which has the largest display of tiles in the world, showcasing Maw’s extensive output with a few tiles from other factories thrown in. Dogs feature throughout, from some of the earlier tiles to those made well into the 20th Century. 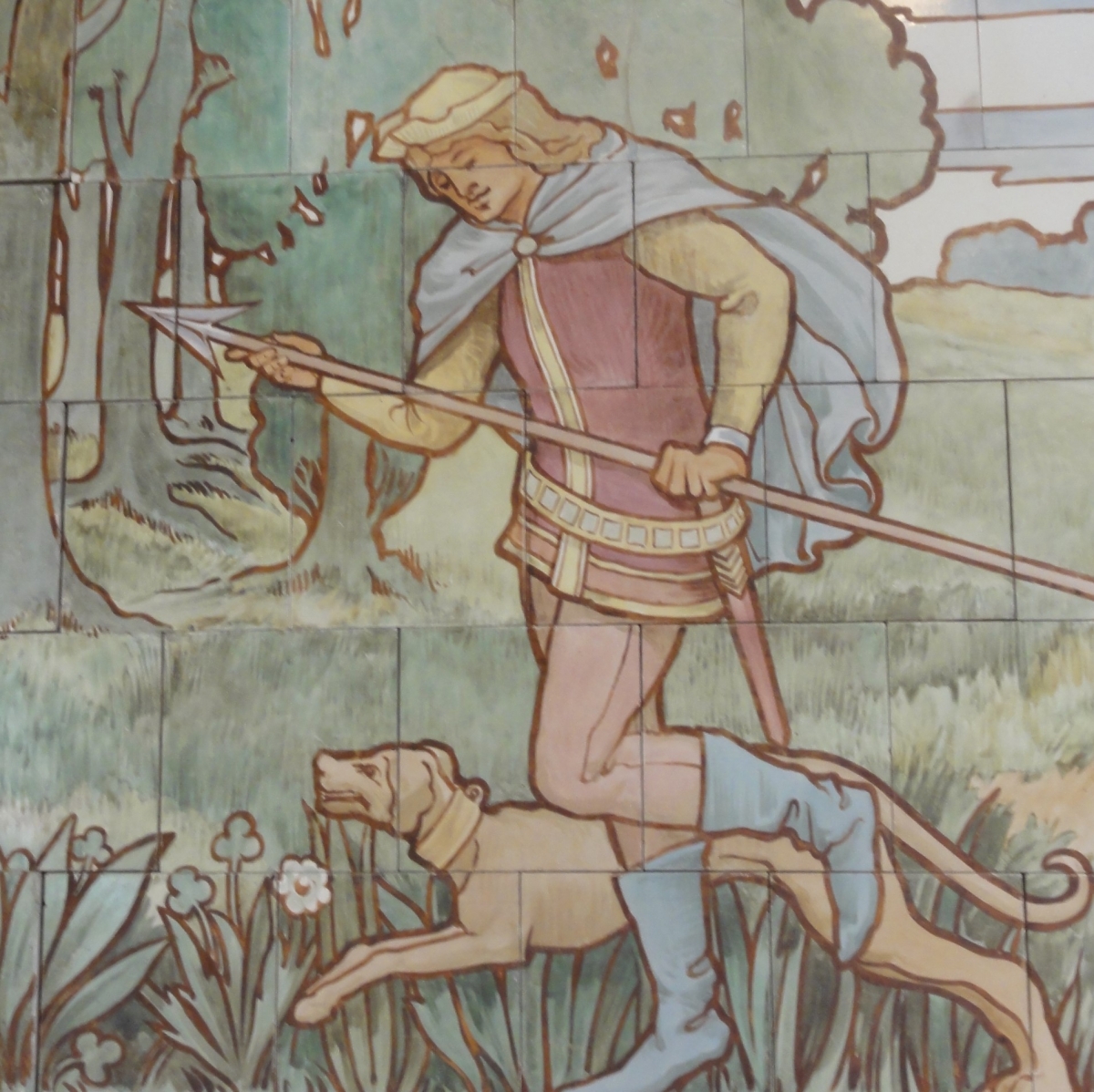 Early on in Maw’s production, W.B. Simpson & Sons Ltd. were appointed as sole agent for the company in the area covered by the London postal district. As a result, stations across three lines of the London Underground are decorated with Maw tiles. One wall in the museum is decorated with a large panel showing medieval hunting scenes that was rescued by the Museum in 1978 from Charring Cross Hospital in London. 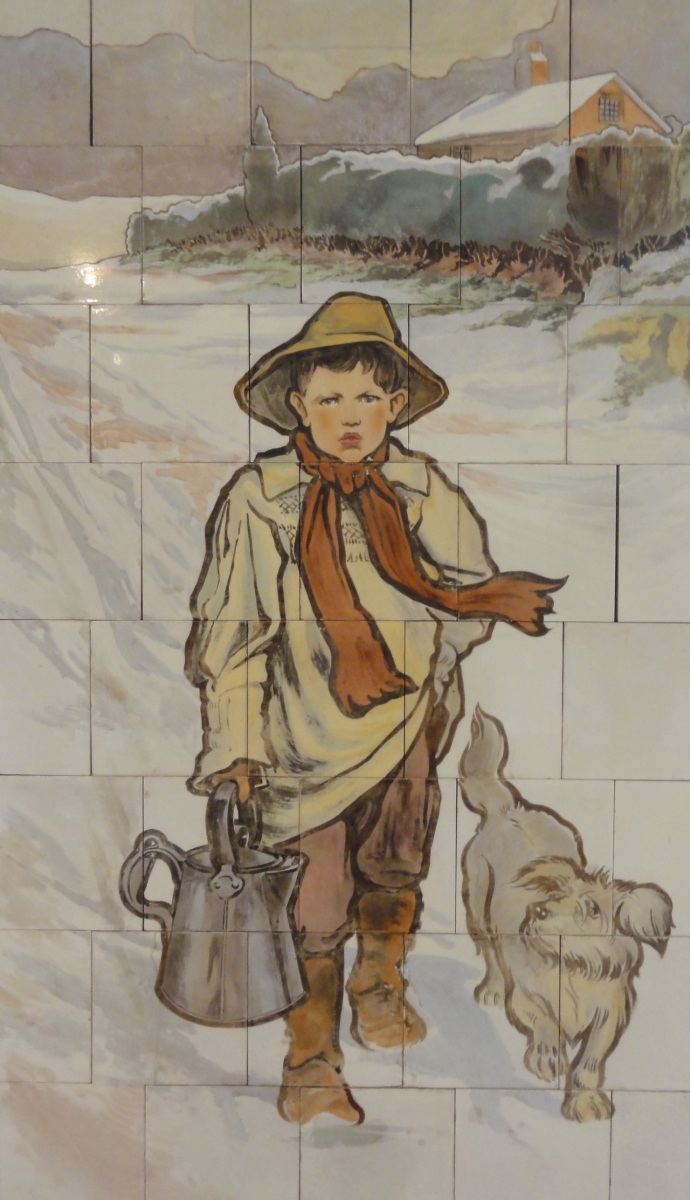 There was a lot of skill needed to make and assemble the panels, even the smaller ones like the young boy with his dog walking in a snowy landscape. Having created the scene, the tiles then had to be fired for two days at a temperature of 1100 degrees Centigrade, resulting in a tile 10 percent smaller and still had to match up perfectly with each other.

Designers made good use of European folklore genre and moralistic stories such as the dog and his shadow and the reaper with his bundle of reeds with his dog running beside him. 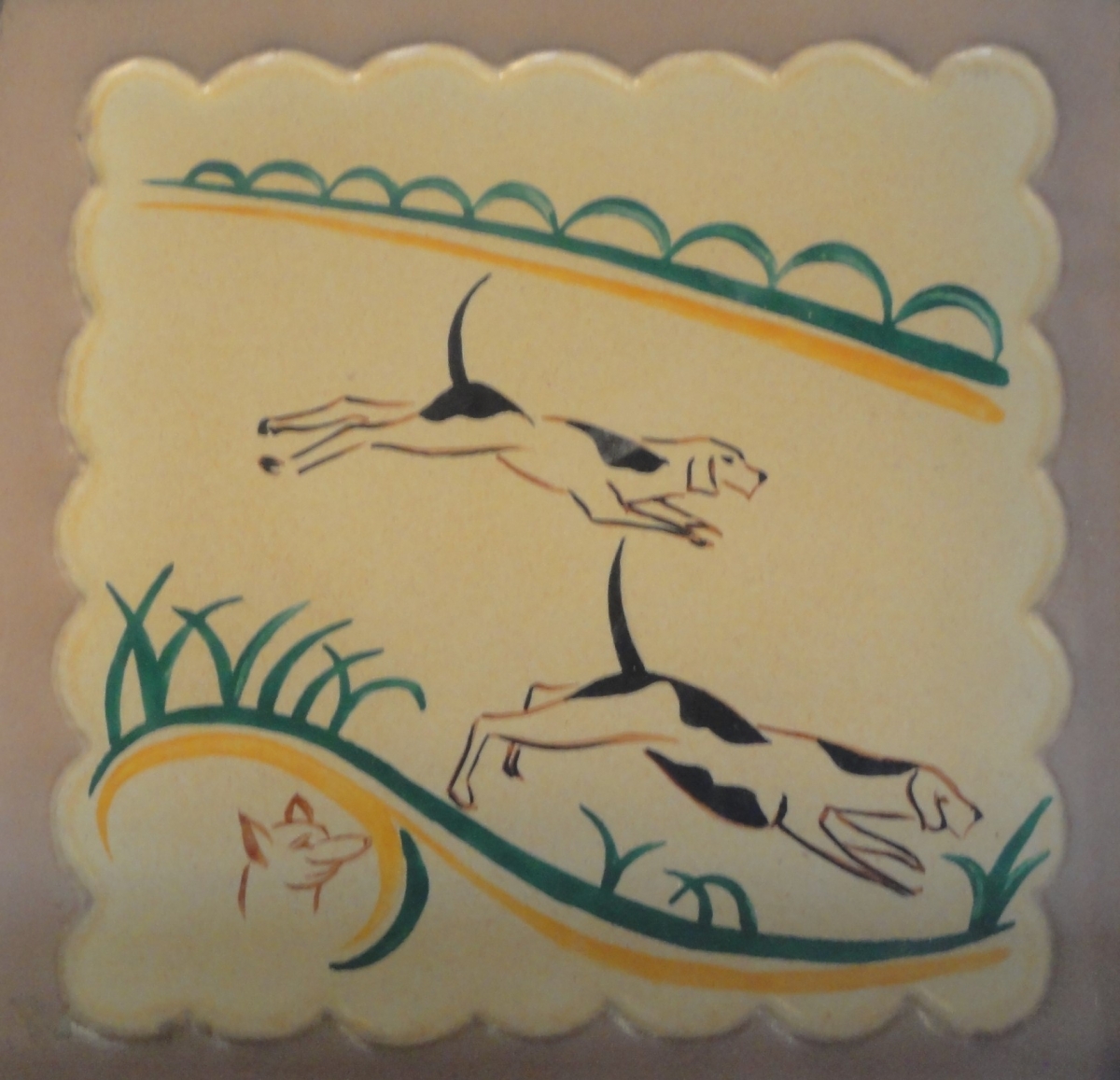 A humorous tile from the Art Deco period shows two Foxhounds in full gallop while the fox hides in the undergrowth as the hounds rush by. The story is told with the minimum of geometric strokes, unlike the highly detailed tiles of the pre-World War I period.

Cecil Aldin is one of the artists whose work has been the most reproduced on the greatest variety of mediums. The hand-painted and tin-glazed small group were designed by Aldin for Carter & Co tiles circa 1935. They included one of his much-loved Sealyhams, a breed that was then popular, and Cracker his favorite Bull Terrier. Aldin was a great dog lover and owner, and first referred to the dogs as “the board of directors” and latterly as “his family.”

© Dog News. This article may not be reposted, reprinted, rewritten, excerpted or otherwise duplicated in any medium without the express written permission of the publisher.
Fri, 05/06/2022 - 12:59am