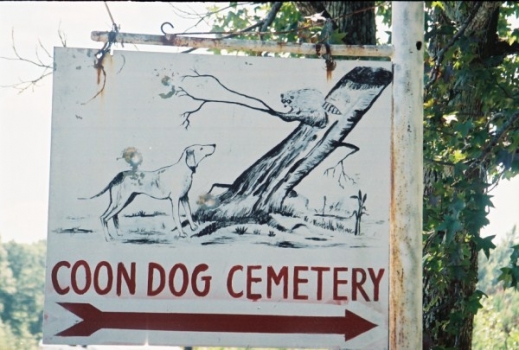 Only Coonhounds need apply at this Alabama cemetery
By
Jonathan Shipley 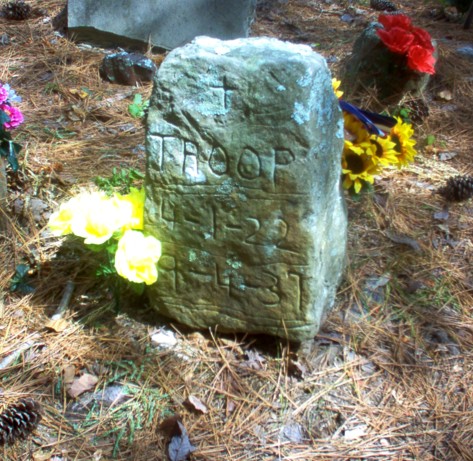 Troop died. It was Labor Day 1937, and Key Underwood had lost his beloved coon dog. Underwood was heartbroken, but took some solace in the joy that Troop had given him – the memories they shared while hunting, the companionship both felt.

Now he needed a special place to lay Troop to rest. There was a ridge in the Freedom Hills of northwest Alabama that the lifelong coon hunter liked. It was an old hunting camp: a place for hunters to hunt, dogs to yawp, and for memories to be made. It’d be there – amid the echoes of fellowship and gunshot; laughter and a campfire’s crackle; the sounds of the truck’s AM radio playing the old country music everyone liked and the tales of men reliving the glories of their youth – that Underwood would take Troop one last time.

He dug a grave with two pals who had come along as comforting company. The dog, wrapped in an old cotton pick sack, was placed three feet down and then covered over with Alabama’s rich soil. Underwood then carved the dog’s name and birth and death dates on an old chimney stone. He said a few words and drove home, lonelier than he had been driving up into those hills. Lonelier, but content. His dead dog was in the woods where he had felt most alive.

Dogs live and dogs die, and, oftentimes, their human companions survive them. Such was the case for Underwood, and for his friends and fellow hunters who had lost beloved coon dogs, too. Soon they began taking their deceased dogs up that hill to join Troop. A cry of dogs buried alongside one another.

“When I buried Troop, I had no intention of establishing a dog cemetery,” Underwood later said. “I merely wanted to do something special for a special coon dog.” 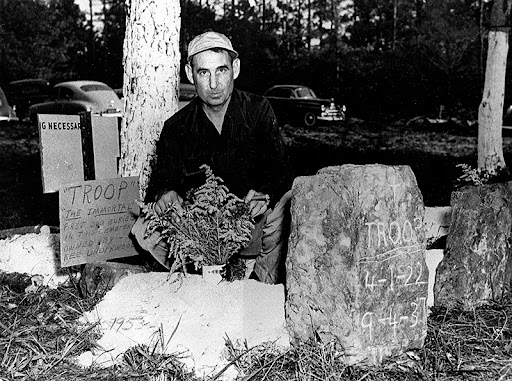 Dogs live and dogs die, and only coon dogs can be buried at the Key Underwood Coon Dog Memorial Cemetery, the only cemetery of its kind in the world.

“It’s a very special place to me,” says Lee Hatton of Lexington, Alabama, who is a board member for the non-profit Friends of the Coon Dog Cemetery. “I started hunting with my Uncle Milton and my two cousins, Franky and Sammy Hatton, when I was six years old.” Now 50, Hatton has led a life filled a lot of coon hunting and plenty of dogs that have made his life more fulfilling.

“I’ve had too many dogs over the years to name them all,” Hatton says, “but one of my favorites is GrNtCh PKC Ch Back Road Roid Rage,” who is buried at the cemetery. Hatton hunts with some of that English Coonhound’s grandpups to this day. 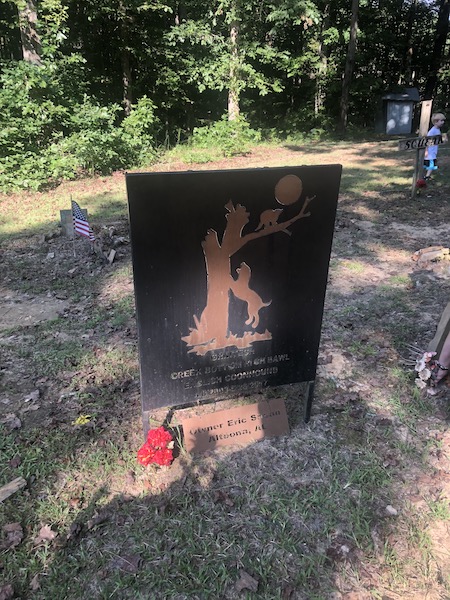 Patches is buried under a patch of grass. So is Preacher. Smokey is buried up on the hill. Night Ranger, too. There are now more than 300 coon dogs buried at the cemetery, which averages four or five burials a year. Some of the markers are simple. Some are ornate. Some are made of granite, others of wood scratched with the dog’s name. Some have dog collars hanging off them. Some have coins left on their stones by passersby. Some are festooned with flowers.

None are forgotten. “A joy to hunt with,” is written on one grave. “He wasn’t the best, but he was the best I ever had,” reads another, echoing the combination of self-effacement and pride that coon hunters are known for.

The cemetery is not open to just any dog. There are no Pulis under the pines, no Shih-Tzus shaded by the shrubbery. When a woman in California wrote to an aging Key Underwood to ask why just coon dogs, he responded, “You must not know much about coon hunters and their dogs if you think we would contaminate this burial place with Poodles and lap dogs.”

To qualify for burial at the cemetery, a dog must meet three requirements: The owner must declare the dog to be an authentic coon dog. A witness must declare the deceased to be a coon dog. And a member of the Key Underwood Coon Dog Memorial Cemetery must be allowed to view the coon hound and declare it as such. 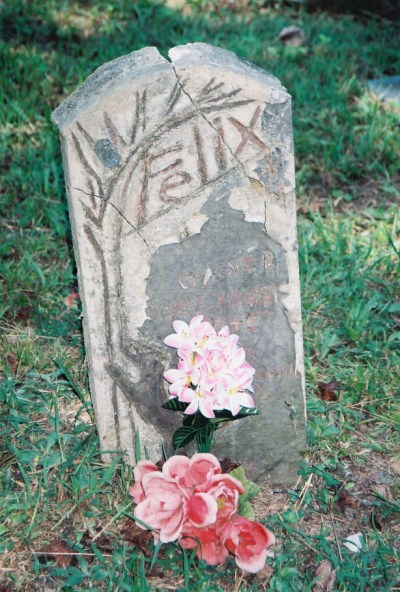 Troo, who was a Redbone, was as authentic a coon dog as could be. He was said to be the best hunting dog there was. But the same could be said for other dogs buried there. Dogs like Blaze and Duke, Flop and Bragg, Crackerjack and Famous Amos – a famous Redbone that was Ralston Purina’s Dog of the Year in 1984. They’re all buried not far from where they’d run, and still run in spirit.

Coonhounds, colloquially known as coon dogs, are uniquely American Scenthound breeds developed to hunt bobcats, cougars, bears and, yes, raccoons. The American Kennel Club officially recognizes six coonhound breeds: the Black and Tan Coonhound, Redbone Coonhound, American English Coonhound (which is never called that among coonhound fanciers – instead it’s an English Coonhound or plain “English dog”), Bluetick Coonhound, Treeing Walker Coonhound and the Plott. All except the Plott descend from colonial-era English Foxhounds that evolved in size and color to best hunt game in their specific localities. (The Plott, which has a harder expression, descends from German scenthounds brought to North Carolina by the family after which it is named.)

All these dogs have captured the imagination of Hatton and his kin for years. “I’ve always just been drawn to them,” he says. “It probably started in first grade, when I watched ‘Where the Red Fern Grows,’” a film adaptation of the 1961’s children’s novel about a boy who buys two Redbones. Hatton remembers his first pup: His Uncle Milton “had a nice English Coonhound named Rock that I hunted with as a kid. I wanted one just like him, so when those pups were born, I went and picked out Rusty. I remember it like it was yesterday.” 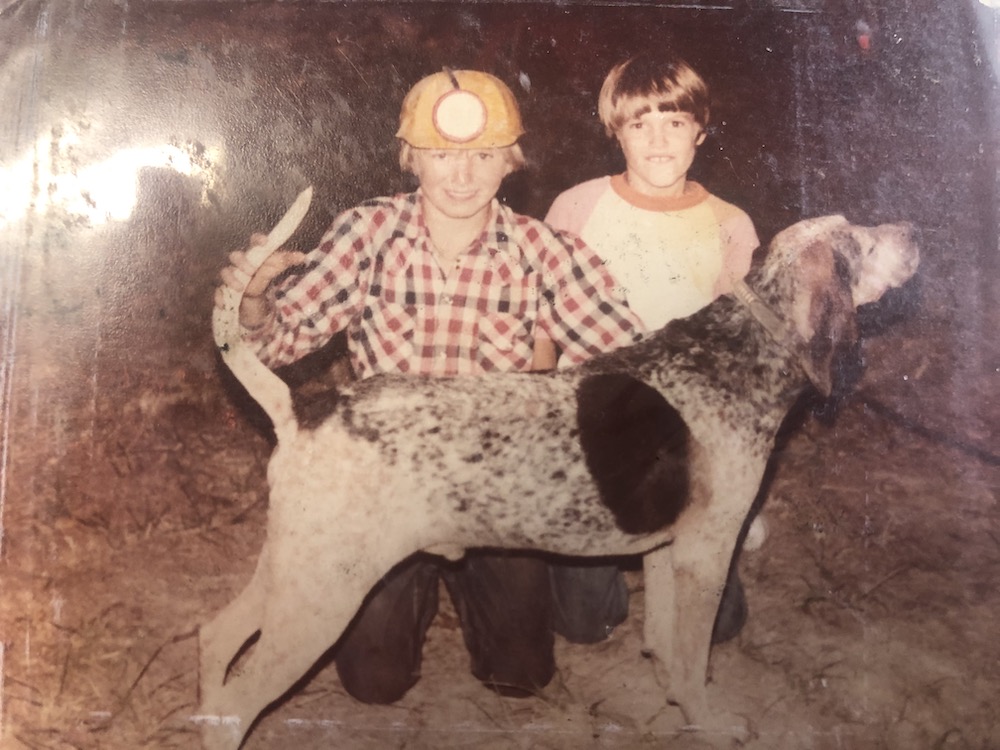 Lee and Frankie Hatton with Rock. 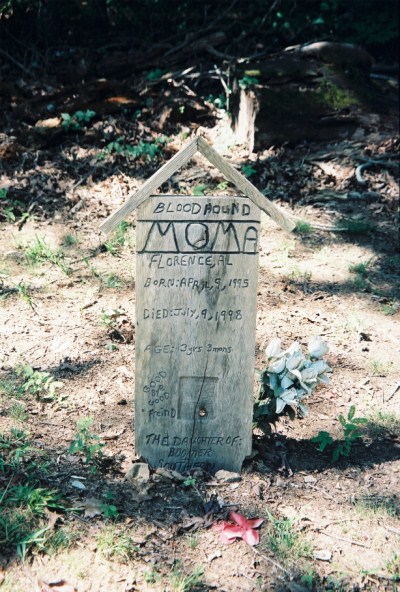 Remembrances of dogs past happen a lot at the cemetery. Tears are shed, for they’re more than dogs. They’re more than pets. They’re friends. More – they are family members. Funerals befitting a family’s grand matriarch happens up on the hill a handful of times a year because some of the dogs there are grand matriarchs. Families bury their own, like Key Underwood did that sad Labor Day.

Now, on Labor Day, there are yearly celebrations. At the hallowed grounds, dog owners come in honor of Troop, and Underwood, and the work done to have created such a special place. Some of Hatton’s favorite memories come from those times. Something he still holds close is “watching the old bluegrass bands play and sing, and watching people buck-dance and tell coon-hunting stories.”

This is a story kind of like that: one of a man, his love of his dog, and the special connection kindled between both in the woodlands of Alabama. It’s a sacred story of kinship and bonding. This is not just Key Underwood’s spot any longer. It’s for every hunter and their trusty companions. It’s tears of sorrow and tears of laughter for anyone who has had a dog at one’s feet. It’s a hymn, of sorts, composed by humans, with lyrics provided by their hound’s soulful baying. This is a story kind of like that. It takes place on a quiet road a handful of miles from Tuscumbia, Alabama, where people bury their beloved dogs. There, under the pines. There, in one’s heart.

© Dog News. This content may not be reposted, reprinted, rewritten, excerpted or otherwise duplicated in any medium without the express written permission of the publisher.
Sat, 11/20/2021 - 1:38pm